What Will Mexico City Do With 2,000 Mammoth Bones? - Atlas Obscura
Want to see fewer ads? Become a Member. 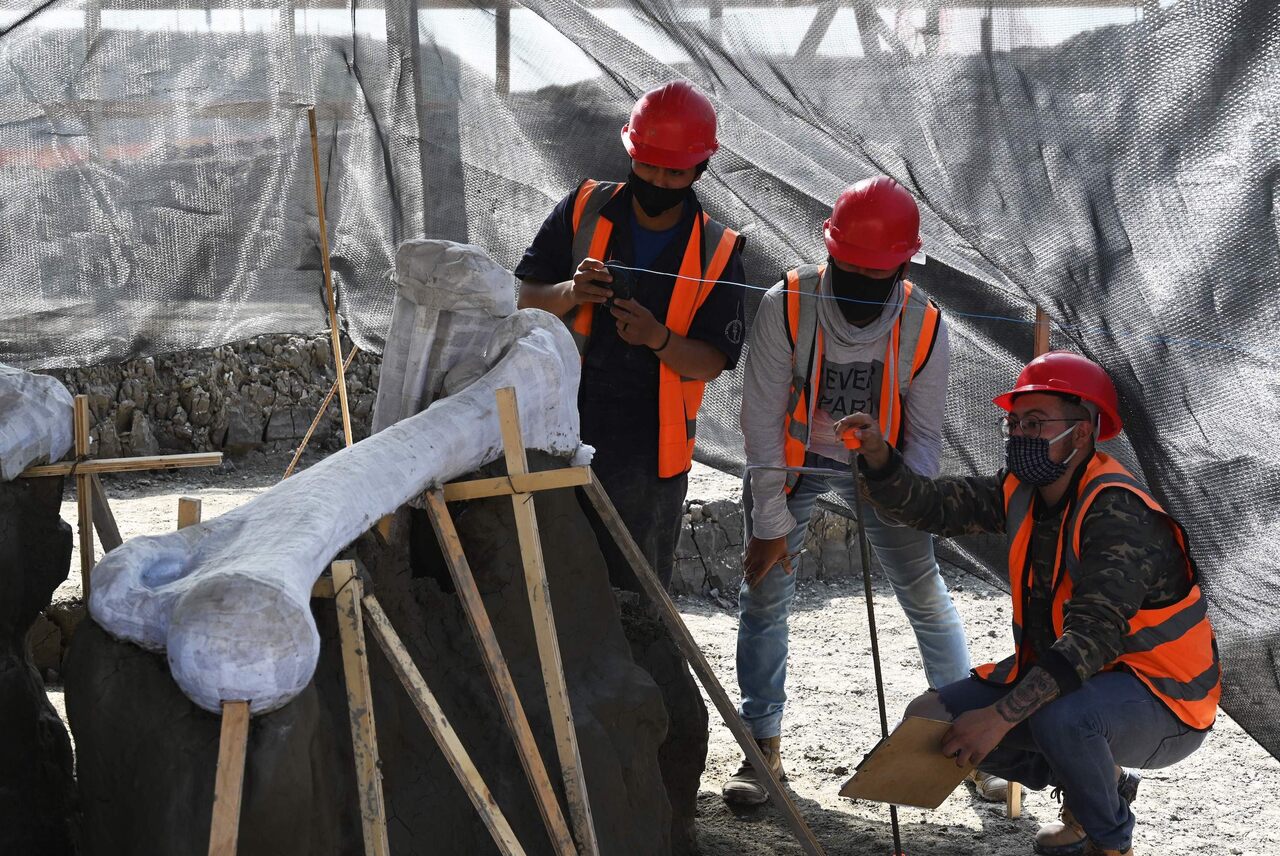 Two thousand mammoth bones have turned up at the site of a new Mexico City airport. Where will scientists put them all? RODRIGO ARANGUA / AFP via Getty Images
In This Story
Place

This prehistoric sinkhole lured exclusively male mammoths to their death, much to the delight of science.
Destination Guide

For the past year, the construction site of a new airport in Mexico City has been the talk of the mammoth world. Heaps of fossils started turning up there in October 2019. “There are hundreds,” archaeologist Pedro Sanchez Nava told Phys.org. “There are too many.” Scientists now sit alongside backhoe operators as they break new ground, monitoring the soil of the ancient lake bed for molars, ribs, and tusks. While excavation is ongoing, the 2,000 bones unearthed thus far likely make up the largest mammoth find in history.

With the operation under the supervision of the Mexican Army, the team involved is under a strict confidentiality agreement, leaving experts wondering where the bones are headed. Atlas Obscura asked two veterans of accidental mammoth discoveries, Jim Mead and Dick Mol, to describe three main approaches toward mammoth presentation—and a source close to the excavation helped clear up some of the mystery.

The first mammoth-storage solution is known as in situ, or on-site, preservation. In 1974, construction work on a South Dakota sledding hill unveiled a giant trove of mammoth bones. Mead, who is now the director of research at the Mammoth Site in the city of Hot Springs, was there on day one of the excavation. “We knew we couldn’t store them all,” says Mead, “and we wanted an education-oriented approach, so ours are still in situ, right where we found them.” Leaving the bones half-exposed allows for public display while minimizing the risk of damaging the remains. The main drawback is that a well-presented skeleton might rest on top of other fossils, as is the case with a Mammoth Site skeleton named “Murray.” “He’s laid out like a filleted fish, and he’s on top of more mammoths,” says Mead. “We can see bones sticking out the sides, but I’m not going to remove Murray, because it’s a spectacular display.”

The next method for displaying mammoths is museum-based reconstruction. Dick “Sir Mammoth” Mol, a Dutch paleontologist who’s overseen mammoth finds from the British Isles to Siberia over his 50-year career, describes a mammoth excavation that took place in Sevks, Russia, in the late 1980s. The expedition was underfunded, he says, and over the course of a single weekend, a team made up mostly of volunteers unearthed seven complete skeletons and transported them to Moscow. They are now displayed in the Azov History, Archaeology, and Paleontology Museum-Reserve. The rushed job produced an impressive display, says Mol, but he laments the destruction of the original site, which was bulldozed, flattened, and developed. “The site doesn’t exist anymore,” he says. “We lost lots of very important scientific content within the sediment.” (Mol, who is a longtime friend of Mead, prefers in situ displays.)

The third approach, Mol says, can provide a happy medium between on- and off-site displays. In 2009, Mol assisted an excavation within an open-air mine in Kostolac, Serbia. “It was the most complete mammoth I’d ever seen, with the entire skeleton intact and in death’s position,” says Mol. To maintain the unique presentation, the team hired heavy machinery to remove the very ground in which the skeleton lay, and transported it to a museum. While this method can run the risk of damaging the specimen, it’s a great way to preserve the rare mammoth whose bones remain posthumously intact, for teams with the time and funding to do so.

When asked which of these approaches might win out in Mexico City, a paleontologist at Mexico’s National Institute of Anthropology and History, Joaquín Arroyo-Cabrales—a man Mead calls “Mr. Mammoth, Mexico”—suggested that a museum was in the works. Due to the nature and pace of the construction, some bones will need to be left behind at the airport. “It’s too large of an area to dig completely,” says Arroyo-Cabrales. “We can’t excavate all of it.” Because tarmacs make for dangerous learning arenas, the in-situ method is off the table, and with the airport’s projected opening date less than two years away, the intensive work of removing the ground around buried skeletons can’t be carried out either. With such a large find, however, the team is already able to assemble around 30 complete skeletons, and counting.

Mead knows from experience that these kinds of plans don’t develop overnight. “It’s a big puzzle, we all have to patiently wait,” he says. Mol agrees: “If you do this in an accurate way, it will take years.” Whenever the museum opens, the good news is that it will be a short trip from a brand new airport.

The country's extensive fossils include early ancestors of whales, the largest mammals on the planet.
plague

A look inside the Mediterranean trading power, courtesy of its hard-working 16th-century porters.
Video • Wonder From Home