The Spanish Navy Is Sailing Two Casks of Sherry Around the Globe - Gastro Obscura
Want to see fewer ads? Become a Member. 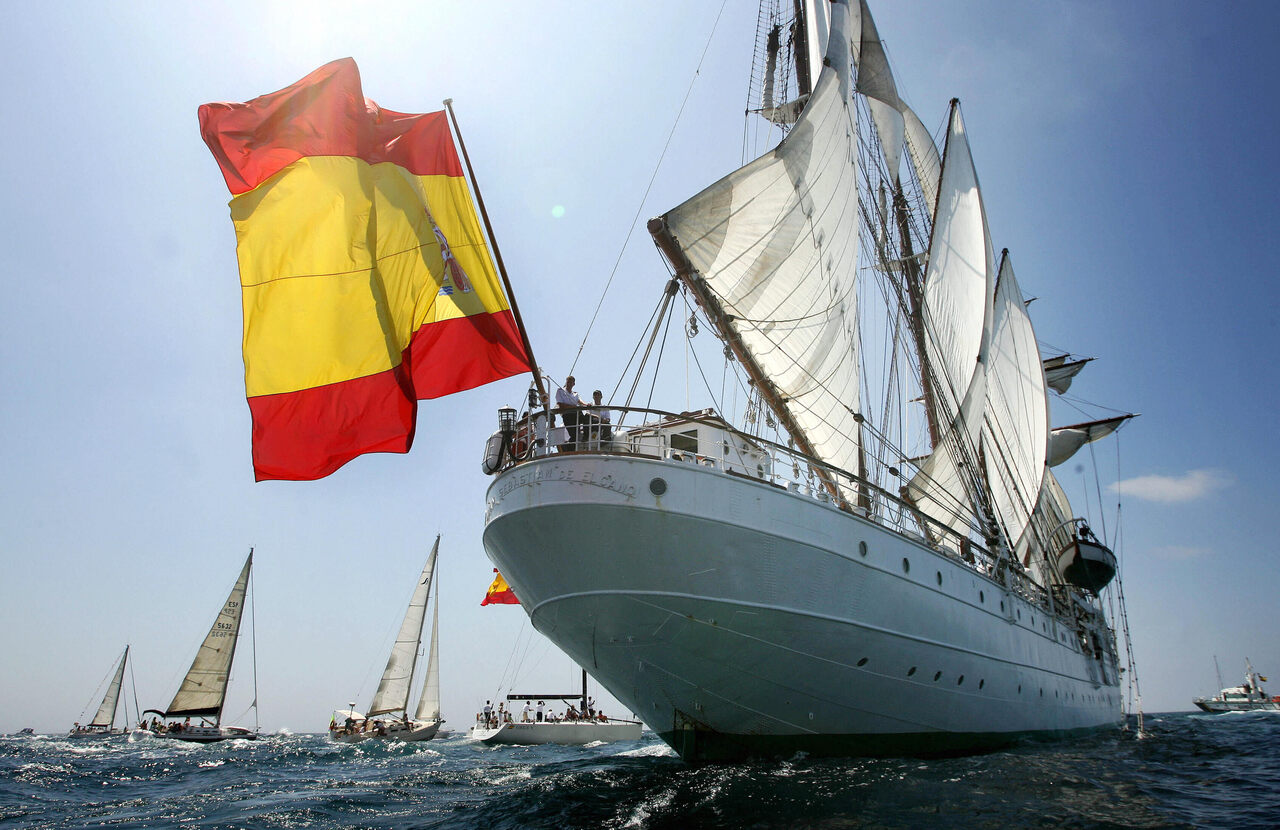 The Spanish tall ship Juan Sebastian Elcano leaves the port of Cadiz during the 50th edition of the Tall Ships Race in 2006. The vessel serves as both naval training tool and international envoy and emblem. JOSE LUIS ROCA/AFP via Getty Images
In This Story
Destination Guide

On August 24, the Spanish naval training vessel Juan Sebastián de Elcano set off on an epic voyage that will take it across the Atlantic to Argentina, then through the Straits of Magellan and across the Pacific Ocean, passing Guam and the Philippines on its way back to the Spanish port of Cádiz. On board are 197 men and women, all the necessary provisions for a year at sea, and two half butts of Amontillado Viña AB sherry from the González Byass winery in Jerez, Spain.

The Elcano, which sailed its maiden voyage in 1928, holds great cultural and historic value for the Spanish Navy and many generations of officers. At 371 feet long, this four-masted topsail, steel-hulled schooner barque is the third-largest tall ship in the world and has sailed more than 2,000,000 nautical miles. The ship’s primary mission is to provide insight into life at sea—naval officers in training typically spend six months to a year on board.

But this year’s voyage is different.

The current expedition commemorates the 500th anniversary of the first-ever crossing of the Pacific Ocean by a European, and the first circumnavigation of the globe, by Portuguese and Spanish explorers Ferdinand Magellan and Juan Sebastián Elcano.

In addition to paying homage to Spain’s seafaring past, the Elcano is recreating another great Spanish tradition: aging wine at sea. The ancient practice dates back to the Phoenicians; in Ancient Rome, Pliny the Elder wrote that in “wines shipped over sea … it is observed that the effect of the motion on vintages that can stand it is merely to double their previous maturity.” It also inspired the nickname of the González Byass sherry aboard the Elcano: Estrella de los Mares, or “Star of the Seas.”

Founded in 1835, González Byass is a historic winery in southern Spain’s so-called “Sherry Triangle.” Upon hearing of the Navy’s intention to recreate the first circumnavigation of the globe, Global Marketing Manager José Argudo says he and his team were moved “to revive this beautiful tradition” of sending sherry to age at sea. They wrote a letter to an admiral detailing the plan, and the response was positive.

“It seemed to be an interesting project, since it’s remarkable to analyze how the movement and list of a sailing ship can dramatically improve the quality of shipped wine,” says Santiago de Colsa Trueba, Commander of the Juan Sebastián De Elcano.

It helps that Jerez is situated close to the Bay of Cádiz, one of the main centers of activity for the Spanish Navy. This has formed links between the Navy, civil society, and the business sphere, including the renowned Jerez de la Frontera wineries. Commander Santiago de Colsa Trueba explains that the Navy should not and cannot receive any tangible or economic benefit from the collaboration, “beyond the satisfaction of supporting a quality, exclusive Spanish product such as Jerez wine.”

According to Antonio Flores, oenologist and master blender at González Byass, conditions aboard the Elcano, including temperature, pressure, and the continuous movement of the waves, are subjecting the winery’s two half butts of sherry to an intense micro-oxygenation process. Accelerating its oxidation, which often happens on land, gradually, through barrel aging, positively impacts the aging of the wine and improves its quality. Aging wine at sea, Flores adds, reduces its water content, concentrating the other components.

“This increases the intensity of the aromas, such as the spice and the vanilla from the wood,” says Flores. “All these factors make the wine more powerful and balanced on the palate and more intense on the nose.” Other spirits with high alcohol content, such as Madeira or Aquavit, can also be aged in this manner, whereas wines with a lower alcohol content would deteriorate.

During the days of the original Elcano and Magellan expeditions, Spanish sherry makers recognized the benefits of aging their wine at sea, and sending it across the waves soon became a lucrative commercial practice. While the shipper was paid handsomely for the service, the winery was able to charge up to five times more for a vintage that had been on a so-called “round trip.”

Sherry was on board for the Magellan-Elcano circumnavigation of 1519, and it also played a part in major maritime expeditions, including Christopher Columbus’s second voyage and the Anglo-Spanish War, the latter of which was instrumental in establishing sherry as the drink of choice for thirsty Brits. In 1587, English sea captain Sir Francis Drake famously raided the port of Cádiz and pillaged some 2,900 butts of sherry, which were brought back to the Court of Elizabeth I. The sherry made a huge splash in England, wending its way into the country’s taverns and, from there, into the works of William Shakespeare.

But from the height of its trendiness in Elizabethan London, the popularity of sherry waned. By the late 1900s, the drink had become grandma’s favorite tipple. However, with fortified wines currently undergoing a major revival, sherry is once again a fashionable cocktail ingredient in bars around the world.

For winemakers at González Byass, this renaissance has inspired them to raise the profile of its brand while paying homage to a long-lost tradition.

“These days, we have the technical means to optimize the quality of the wine without sending it on a round trip,” says Antonio Flores wistfully, “but this project is all about reviving the romanticism of the old practices.” As we talk, his two half butts of Amontillado Viña AB slowly roll across the waves of the Atlantic Ocean.

During the Renaissance, Drinking Wine Was a Fight Against Physics

In an Italian Town, Red Wine Briefly Flowed From Faucets and Taps

The World's Largest Bottle of Wine Just Spilled in Austria

In 1936, the Party suddenly switched from denouncing bubbly to mass producing it.
Video

The lychee-looking fruit appears in everything from jam and liqueur to the Aeneid and Madrid's flag.
Gastro Obscura

The washed and dried root of the licorice plant was once a popular natural “candy.”
Gastro Obscura

Recently introduced to France, it's the color of pool water.
Want to see fewer ads? Become a Member.
Related

The writer was concerned about the rise of binge-drinking bros.
Read more
Thanks for sharing!