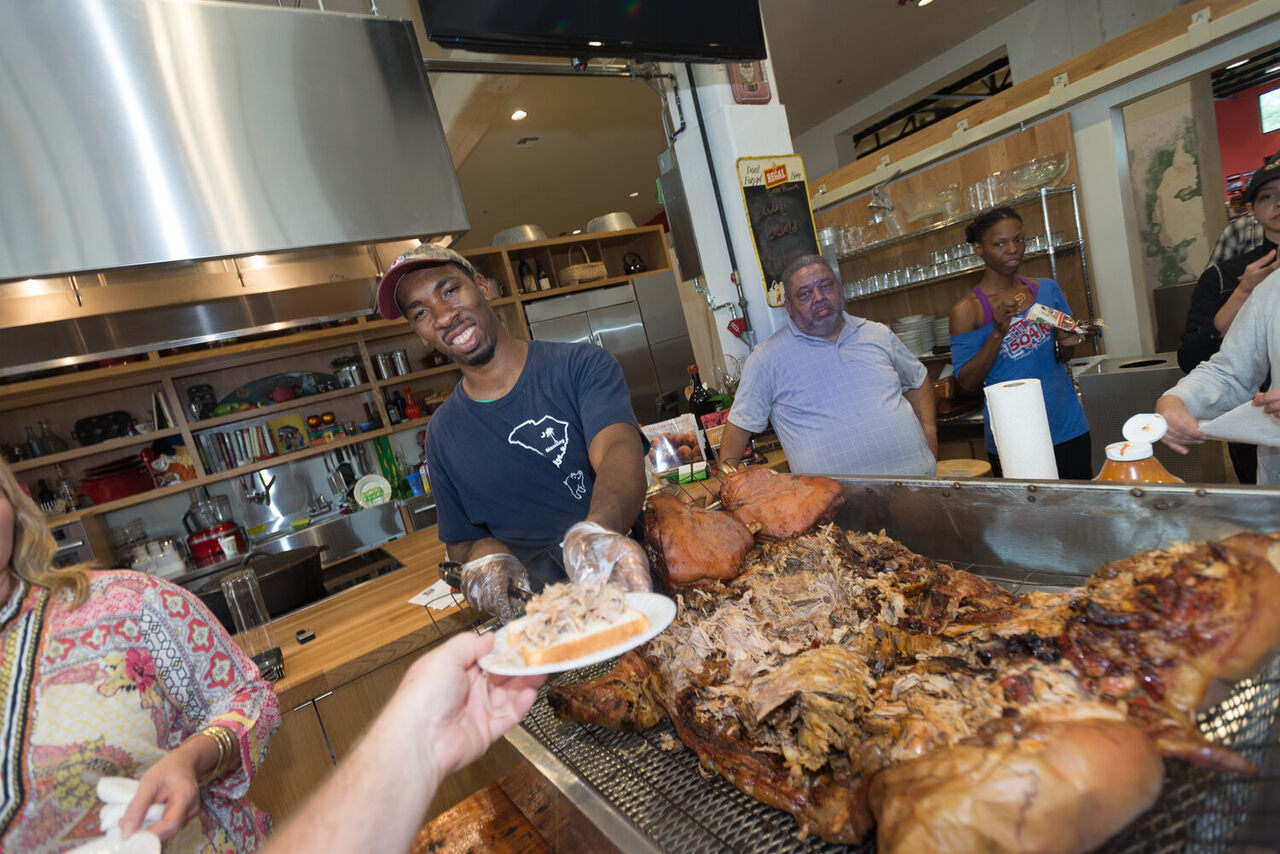 Conyers dismantles a hog at a Southern Food and Beverage Museum event on South Carolina barbecue. Stephen Binns/Courtesy of Howard Conyers
In This Story
Destination Guide

Making whole hog barbecue is not an easy undertaking. It’s time- and labor-intensive, and each step requires precision. Chop wood. Dig a pit. Build supports for the hog. Start a fire. Clean and season the hog. Roast the hog on a spit above wood coals. Then, cook low and slow for approximately nine hours.

This procedure means more than a meal to be enjoyed. It represents a long legacy of African-American pitmasters, one that is in danger of disappearing. Rocket scientist and pitmaster Dr. Howard Conyers is trying to change that.

Conyers grew up in South Carolina, five miles from where his family was enslaved prior to the Civil War. Living on land that his family had owned for generations, he enjoyed how whole hog barbecue brought his family together at occasions throughout the year. But Conyers, growing up with the custom, “took it for granted” that it would always be around. “My whole life was whole hog,” he says.

But barbecue didn’t become Conyers’s only calling. He currently works at Stennis Space Center, on the border of Mississippi and Louisiana. There, he tests rocket engines for NASA. He’s also a whole hog pitmaster, and until recently, the host of the PBS Digital Studios show Nourish, where he talked to everyone from Leah Chase, the late Queen of Creole cooking, to historian David Shields, who is dedicated to bringing back Southern heirloom foods such as the Bradford watermelon.

On the surface, it may appear there isn’t a correlation between rocket science and cooking, especially barbecue. But to Conyers, the parallels are obvious. “It’s just like testing rockets,” he says. Rockets and pits both have to be thought out, designed, and built. Ultimately, the test is if the rocket works and if the hog is cooked well.

Conyers became interested in math and science while growing up on the farm. “When we sprayed nitrogen, which is fertilizer, to the corn and it turned green, you could tell there was a cause and effect,” he says. “When we dissected animals in school, it wasn’t that different from slaughtering animals on the farm.”

Yet the scenes of Conyers’s childhood are fading away. “I realized, in my community back home, the number of black people cooking whole hog has decreased,” Conyers says. “The people who did this are getting older. And just like farming, whole hog in my community was disappearing.”

At the same time, barbecue became one of the trendiest foods in America. But as culinary historian Michael Twitty writes in The Guardian, “It was enslaved men and their descendants, not the Bubbas of today’s Barbecue Pitmasters, that innovated and refined regional barbecue traditions.”

Whole hog barbecue is different from other styles of barbecue. The hog is cooked in one piece, versus cooking it in parts. It’s considered the oldest form of barbecue in the United States, with roots in the cooking styles of the indigenous peoples of North America. However, the process gained traction in the American South, where enslaved people would cook whole hogs on plantations for celebrations and political gatherings.

In the past, the arduous work of preparing barbecue outside for 12 to 24 hours at a time was given to African-American men and women, both enslaved and free. One of the most renowned was John Dabney, who after purchasing his freedom, became a caterer and opened several restaurants in Virginia after the Civil War.

According to Conyers, the face of barbecue has changed, partly due to the food media focus on competition barbecue. Barriers to entry are high, with costly entrance fees and the requirement to travel throughout the United States in order to participate. Plus, competition barbecue is judged on four specific meats and cuts—chicken, pork (specifically pork shoulder), baby back ribs or spare ribs, and brisket. As of this year, there are only three African-American pitmasters in the Barbecue Hall of Fame, and each award was given posthumously. In contrast, white celebrity chefs such as Guy Fieri have received the award.

Conyers wants to redefine the barbecue narrative through his work, by telling the stories of the African-Americans “who decided to stay down south, and the strength and courage they exhibited.” A few years ago, Conyers realized his father wasn’t cooking hogs anymore. Instead, he was told, it was “up to the next generation to pick up and keep it going,” which kickstarted his own desire to continue the tradition.

“When I cooked in the ground in 2017 … it was the first time that anyone in my community had done that in 40 years,” he says. “If I don’t recreate that, then it would be lost. I wasn’t going through a WPA narrative to recreate it.” [WPA stands for the Works Progress Administration, a government program that documented local life from 1939-1943.] Instead, he says, “I asked my dad to recreate it. If it hadn’t been done, then I wouldn’t know first-hand.”

Conyers wants people to know that barbecue is more than brisket. Recently, he’s prepared whole hog demonstrations at events and fundraisers such as Hogs for the Cause in order to amplify that African-Americans created what we know as barbecue. As for the time-consuming, laborious process of learning how to cook whole hogs, “I did it for the love of the craft and the people who did it before me,” he says. Looking forward, Conyers wants to write a book on the contributions of African-Americans to barbecue. In it, he plans to “show the black hand, from the farm to the pot or the pit.”

How Vikings Hunted Themselves Off of Greenland

Kansas City Is Now Home to a BBQ Vending Machine

Burnt ends at the push of a button!
restaurants

Weeksville residents set a precedent of self-determination that is still visible at Brooklyn restaurants.
food

In Arkansas, this order will land you a plate of fried fish.
Gastro Obscura

In the American South, some believe it deters rain on one's wedding day.
Gastro Obscura

Cooks in the Southern United States still whip up this spicy, seductively sweet condiment from the 1950s.
Want to see fewer ads? Become a Member.
Related

Duchess Quamino was the embodiment of creative survival.
Read more
Thanks for sharing!