Is the World's Oldest Tree This Stately Cypress in Chile? - Atlas Obscura
Want to see fewer ads? Become a Member. 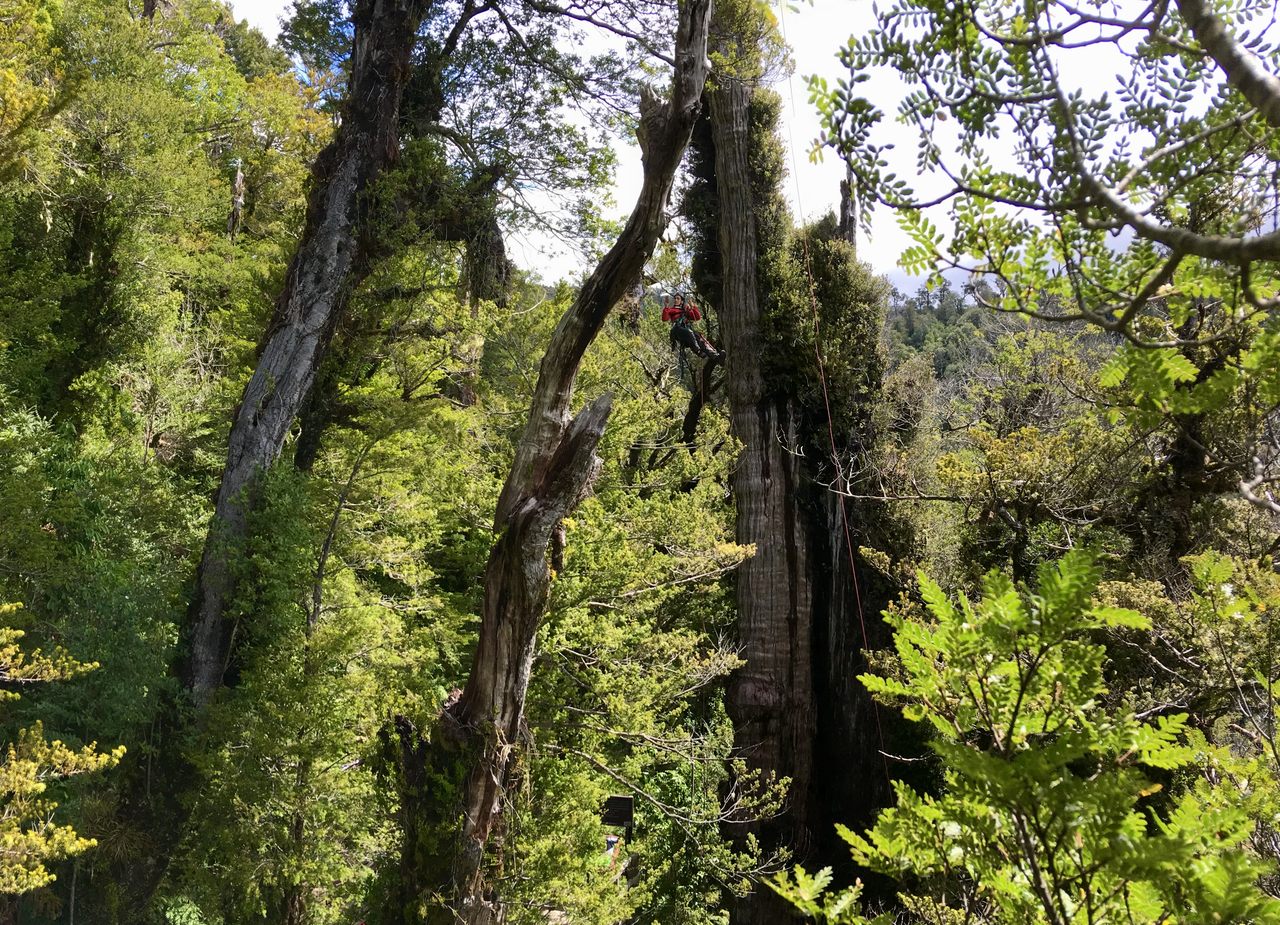 Even wearing a red jacket and dangling midair on a safety line, canopy ecologist Camila Tejo is hard to spot as she checks on the towering Alerce Milenario rising behind her. Courtesy Jonathan Barichivich
In This Story
Destination Guide

Deep in a ravine that cuts through the coastal mountains of Chile’s Alerce Costero National Park, there is a behemoth of a tree. Cloaked in moss and lichens, the Patagonian cypress known as the Alerce Milenario rises 196 feet through layers of mist and thick, humid air. Over thousands of years, time and the elements have pulled off long, thin strips of its bark, leaving the tree’s 13-foot-wide trunk marked with striations of green, gray, and reddish-brown. Most of the tree is dead; the living part is largely contained in a fragile root system—one that’s easily damaged by people treading too close to what may be the oldest tree in the world.

Jonathan Barichivich grew up near the park, where his grandfather, a park ranger, discovered the Alerce Milenario decades ago. In 2020, after completing his doctorate in environmental science at the University of East Anglia, Barichivich returned to study the cypress and, along with colleague Antonio Lara, determine its age. “Almost 50 years since my grandfather discovered it, we didn’t know anything about the tree,” Barichivich says.

When dating a tree, dendrochronologists usually bore a hole into the trunk and extract a pencil-thin sample, or core, and then count the rings using a microscope. But Barichivich, unwilling to drill all the way into the cypress for fear of damaging it, turned to statistical modeling instead. Using cores from other nearby alerces, as well as environmental data, he calculated a range of possible ages. His model placed the alerce’s most likely age at 5,484 years old, with an 80 percent probability that the tree is more than 5,000 years old.

If the model is correct, it means the Chilean tree is senior to the generally accepted current titleholder of world’s oldest tree: Methuselah, a wizened bristlecone pine located in California’s White Mountains. University of Arizona dendrochronologist Edmund Schulman spent nearly 20 years searching for the world’s oldest trees before finding Methuselah in 1953, based on a tip from a park ranger. In 1957, Schulman and his University of Arizona colleague Tom Harlan placed its age at about 4,850 years. But determining which tree is truly the world’s oldest—and even which organisms should be considered contenders—is more complicated than you might think.

Tree rings form because new growth, beneath the bark, generally starts out as a light tan color in spring and then darkens, due to cell walls thickening, as winter approaches. The majority of trees grow one ring each year (though some species, notably tropical trees, lack rings and require other methods of dating). Dendrochronology uses ring patterns to determine an individual tree’s age, but it also provides a way to reconstruct a timeline of environmental changes that left their mark by impacting tree growth, says University of Nevada dendrologist Franco Biondi. By analyzing aspects such as width and color, and by comparing ring patterns from one tree to the next—a process called crossdating—tree rings can reveal evidence of droughts, fires, and other large-scale events.

While the Alerce Milenario’s estimated age was not calculated via traditional tree ring dating, other contenders for the world’s oldest tree have endured the intrusion of a pencil-thin drill. They include the Sarv-e Abarkuh, a towering Iranian cypress, and Wales’ sprawling Llangernyw Yew, both of which are estimated to be between 4,000 and 5,000 years old. In 2012, Harlan—who had helped date Methuselah decades earlier—described another bristlecone pine that he estimated to be 5,062 years old; however, the dendrochronologist died before sharing the tree’s location, which remains unknown.

A failed attempt to collect a core from another ancient bristlecone pine known as Prometheus led to the tree’s demise in 1964. The tree was cut down, with permission of the U.S. Forest Service, because a graduate student coring trees in the area for a geology study was unable to extract a sample and wanted a full cross-section instead. The full slice revealed that Prometheus was about 4,900 years old.

What all these contenders have in common is that they are individual, genetically unique entities. Bristlecone pines, alerces, and yews are all what scientists call non-clonal organisms. Clonal organisms, on the other hand, are genetic copies of a single ancestor, and, in terms of longevity, they win every time. The world’s oldest living thing—aside from some deep-sea microbes and dormant bacteria found in permafrost—may be the clonal organism Pando, a grove of genetically identical quaking aspens linked to a shared root system that sprawls over 107 acres. Some estimates place the organism at more than 80,000 years old.

Another particularly ancient tree is Old Tjikko: Identified in Sweden* in 2008, the tree is scrappy and stands only 16 feet, but the root system of this clonal organism is more than 9,500 years old. “No one believed these trees were that old,” says Sapienza University professor Laura Parducci, who has studied Old Tjikko. To pinpoint its age, scientists dug below the tree, unearthed ancient cones and fossilized material, and then carbon-dated the samples. And Old Tjikko, Parducci notes, is almost certainly not the oldest clonal tree. It is, she says, “simply the oldest one that we have dated.”

While Old Tjikko is sometimes called the world’s oldest tree, it is technically not a contender—and neither is Pando. According to Biondi, tree age is typically calculated by trunk age, for “either clonal or non-clonal organisms.” Despite the advanced age of their root systems, the current trunks of both Old Tjikko and Pando are at most a few centuries old.

If Barichivich’s calculations about the Alerce Milenario are correct, the Patagonian cypress, which watched silently as humans developed writing, clocks, and the hydrogen bomb, claims the title of oldest tree. However, some dendrochronologists have questioned his use of statistical modeling rather than a traditional physical sample. Ed Cook, a founding director of Columbia University’s Tree Ring Laboratory, told Science that accurate tree ring dating “requires that all rings be present and accounted for.”

Barichivich’s statistics-based approach is just one way that scientists are innovating the study of ancient trees. For example, as described in a recent Nature Communications paper, Parducci and her team used ancient DNA, obtained from tree fragments that were preserved in peat and lakebeds, to determine that Norway spruce, Old Tjikko’s species, moved into the area thousands of years earlier than previously thought.

Ultimately, for Parducci, Barichivich, and their peers, determining the world’s oldest tree is less important than understanding the information preserved within all these ancient organisms—which also means protecting them. Although Barichivich has not had his findings about the Alerce Milenario published in a peer-reviewed journal yet, news of the tree’s estimated age has brought media attention to the park. Barichivich worries that increased tourism, particularly foot traffic on and around the tree’s delicate roots, will damage both the cypress and its ecosystem.

The Alerce Milenario, Barichivich says, is a “powerful spirit protector of the forest” that carries important wisdom. “We’re just starting to decode part of that message with science,” he says, adding, “but probably, that message will be for future generations. That’s why it’s so important to protect the tree.”

Correction: This story previously stated Old Tjikko is located in Norway. While it is a Norway spruce, the tree is located in Sweden, close to the Norwegian border.

Revisiting the Weird and Wonderful Nature of 2022

This year, we met creatures (and other living things) great and small, from the world’s largest organism to microscopic parasites.
forests

What's the Hardest Wood in the World?

And what does hard mean, anyway?
forests

3:07
Want to see fewer ads? Become a Member.
From Around the Web
Atlas Obscura Trips
Chiloé & the Fjords of Northern Patagonia
View This Trip
Thanks for sharing!