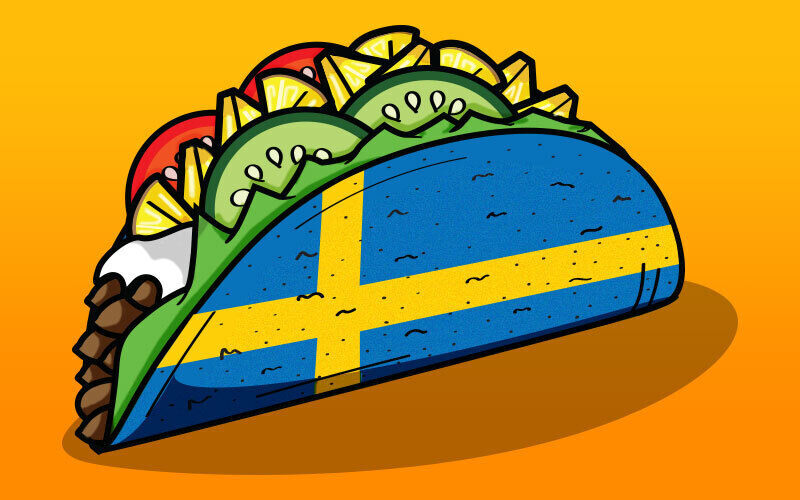 Sadly, this is not what the taco shells actually look like. Aïda Amer for Gastro Obscura
In This Story
Destination Guide

Swedish food columnist Daniella Illerbrand remembers her first Taco Friday well. She was 14, and it was the first time her parents, who cooked everything from scratch, decided it was okay to buy ready-made ingredients like tortillas and spices.

“That was a big deal for us,” says Illerbrand, who works for Sweden Foodtech, an organization that works with food startups and businesses. “My parents liked traveling, so they were into trying something new.”

It was her first real Fredagsmys, or Cozy Friday, a beloved Swedish tradition. Across the Scandinavian country, families stay home on Friday night, watch TV, and eat Tex-Mex-style tacos. This dinner choice is so common that, for most Swedes, Cozy Friday is also Taco Fredag, or Taco Friday.

A few elements conspired to make Taco Friday a Swedish institution. In 1990, the country was emerging from a financial crisis, and Swedes were eager to spend again and try new things. Around the same time, government deregulation of television allowed advertising for the first time. Prior to that, Swedes had only seen on-screen ads in cinemas.

The Swedish chips company OLW popularized the slogan “Now it’s cozy Friday time” in its commercials. These days, most Swedes can still hum the catchy jingle by heart. This is widely believed to be the origin of the term Fredagsmys, and in 2007, it was even adopted into the Swedish dictionary.

Chips are still part of many Swedes’ Cosy Friday routine, but it’s Tex-Mex that truly benefited from the idea of staying in and eating processed foods on the sofa. Old El Paso, which had been attempting to break into the market in the 1980s, experienced success as its ads demonstrated taco assembly.

Meanwhile, the Swedish spice company Nordfalks, which marketed their Tex-Mex products to appeal to a Swedish audience, eventually changed its name to Santa Maria due to the popularity of its tortillas and tacos. Their TV spots suggested tacos as a staple of Cozy Fridays, and for Swedes, who were already used to smörgåsbord or potluck-style meals piled onto one plate, tacos were something new and exciting, yet familiar too.

“Commercials were very important in showing how you could put together tacos because before that we didn’t have anything where you could put it together in front of the TV like that,” says Richard Tellström, a food historian and professor at Stockholm University.

Soon enough, grocers and restaurants rallied around the idea, promoting Cozy Friday with discounts and take-out specials. Taco Fridays even became a staple of Sweden’s free lunch programs for schoolchildren.

“I remember being a teenager when you would start having dinners for school functions at restaurants, and the restaurant would make a taco buffet,” says Illerbrand. “That was, like, the best thing ever.”

Tex-Mex was a hot American import, just like the series and movies on the tube. But once it arrived, it morphed, becoming infused with Swedish food culture. Spin-off recipes emerged, such as taco pie (also available in frozen food aisles), taco soup, taco pizza, and taco burgers. “Anything where you could add the packaged spice mix, really,” says Tellström. Americans might recognize the ground meat, soft or hard tortilla shells, peppers, onion, tomatoes, and guacamole of Swedish tacos, but not necessarily the cucumber, peanuts, pineapple, and yoghurt sauces that Swedes added to suit their own cultural tastes.

Cucumbers, which are perhaps the most curious ingredient, reflect a particularly Swedish love affair: Historically, Sweden’s summer months were jokingly called “cucumber time,” and you’ll still find cucumber on most dinner tables. It may be pickled, sliced and doused with vinegar and salt, or atop a salad; it’s also often a topping on kebab pizza, another ubiquitous national dish imported and adapted for the Swedish palate.

Over the decades, Fredagsmys has become a national institution. On Fridays, Swedish families gather at home, hang out in their pajamas (or base layers in winter), and relax. Friday evenings are a primetime slot on Swedish television, in contrast to what’s known as the “Friday night death slot” in the United States. According to Tellström, tacos are the preferred meal, but it can be anything eaten by hand: burgers, pizza, guilty-pleasure processed snacks, or pick-and-mix candies (a national obsession that is also indulged on Lördagsgodis, or Saturday sweets).

As a family tradition, Taco Fridays haven’t changed much over time. “What we haven’t seen is hipster tacos—no making the shells yourself or cooking the meat for 24 hours,” says Tellström. “It’s still mostly canned, packaged ingredients.” But its imprint on Swedish food is clear. Walk into any supermarket and you’ll find a sprawling Tex-Mex section, sometimes even larger than the baked-goods aisle. Market research shows that Sweden is now the highest per capita consumer of Mexican food in Europe, along with Norway, which practices Taco Fridays too.

However, a study by the Swedish newspaper Aftonbladet shows that Tex-Mex products don’t sell as well in supermarkets in immigrant neighborhoods. “It does tend to be more [practiced by] Swedish middle-class families,” Tellström says.

“Tacos have become known as something classically Swedish,” says Swedish-Brazilian writer Rafaela Stålbalk Klose. “The kids from Brazil or Gambia I hung out with had no time for tacos, they ate their own food for dinner … But I grew up in an all-white neighborhood, and the kids I went to school with were all Swedes and they ate it.”

Sure, pairing tacos with pizza, candy, chips, and beer and soda bucks modern-day wellness trends, but according to Tellström, Cozy Fridays has mental health benefits. In Sweden, family meals are less frequent than in other Nordic countries, so tacos are a convenient meal that allows people to spend more quality time together.

“It’s not about increasing your body standard, but your family standard,” he explains. “It’s healthy to have a family and someone to live with. For Swedes, the purpose of food is to eat it with other people.”

Remains hidden with this Swedish “founding father” likely belonged to his grandson, but questions linger.
music

Join us for a daily celebration of the world’s most wondrous, unexpected, even strange stories.
objects of intrigue

These beautiful mementos of mourning have all but disappeared.
shipwrecks

In 1495, a fire destroyed a stately ship and sank a big fish.
Video • Wonder From Home

A tiny village is home to the world's only diner completely devoted to the many varieties of traditional Swedish dumplings.
Dala-järna, Sweden

This giant subway sculpture celebrates the fruit that inspired the theory of gravity.
Stockholm, Sweden

Located in an old church, this brewery produces a different kind of holy water.
Want to see fewer ads? Become a Member.
Related