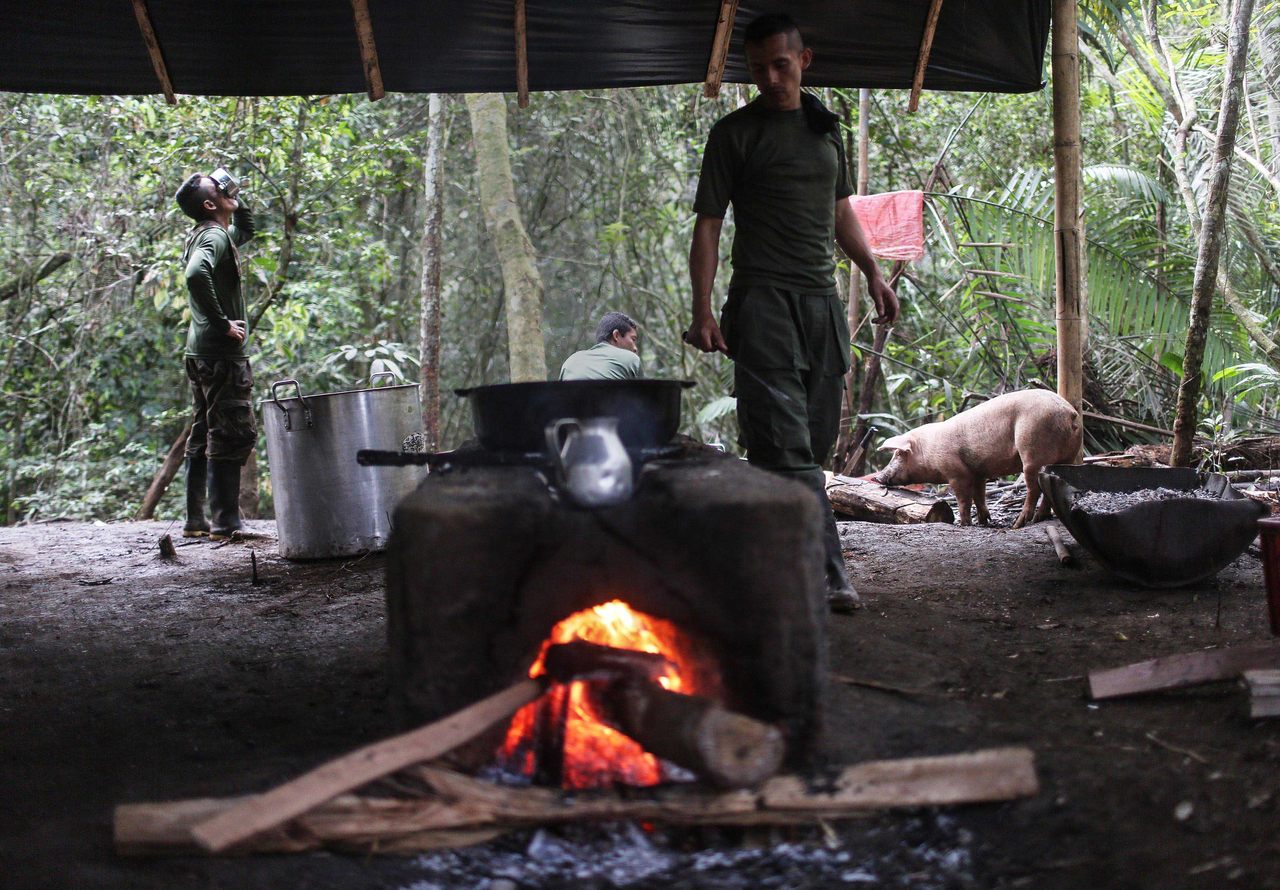 FARC rebels in their field kitchen during breakfast hours at the 10th Guerrilla Conference, where the peace accord was being ratified by on September 23, 2016. Mario Tama/Getty Images
In This Story
Destination Guide

The night before, Ricardo Semillas and his neighbors had cooked like they were still rebels in the FARC-EP (Fuerzas Armadas Revolucionarias de Colombia - Ejército del Pueblo). They had patiently kneaded eggs, water, and salt into flour. They then carefully divided the dough into balls, and flattened them until they became translucent, like soft chiffon. When hot oil touched the dough sheets, it puffed them up like a breeze filling a curtain. Once golden, the dough had become cancharinas, which is known amongst the group as “the bread of guerrilleros.”

In the morning, they woke before dawn and packed fried beef and the cancharinas. But the 15 former guerrillas were not going to war. Instead, the food that once fueled their marches and civil war was a pack lunch as they joined a national strike to protest tax reforms, high unemployment rates, and widespread poverty intensified by the pandemic.

The cancharinas made by Semillas, along with dozens of other FARC foods, are now a topic of study for a small group of researchers who believe the history of Colombia’s internal conflict should be explored not only in terms of violence. The goal, explains anthropologist Tomás Vergara of Javeriana University, is to explore and document the former rebels’ daily lives, and an emerging area of study is understanding how an illegal organization fed thousands of people living in Colombia’s forests, mountains, and valleys. The conversations, interviews, and cooking workshops between researchers and former guerrilleros have unearthed a food system on an unimaginable scale.

“It is a universe,” says food anthropologist Ramiro Delgado Salazar of the University of Antioquia. “They sow, they cultivate, they gather, steal, take, give, they have all sorts of transactions of food, in this weaving to feed a whole bunch of guerrilla rebels.”

The FARC was founded in the 1960s in Central Colombia by peasants who took up arms against the government, demanding land and opportunities. Over 50 years, the guerrilla group expanded through Colombia—partly financed with drug money—and grew to nearly 10,000 rebels. In 2016, the FARC, then the oldest guerrilla group in the continent, signed a peace agreement with the Colombian government, putting an end to the half-century civil war that ravaged the lives of nearly 8 million Colombians, 16 percent of the country’s population.

Two years later, nutritionist Isabella Fuenmayor Cadena, from Javeriana University in Bogotá, saw the intricate web of the FARC’s food system taking shape on one of her bedroom walls. For her undergrad thesis, she interviewed 10 former FARC members at the community Comunidad Noble y de Paz Marco Aurelio Buendía in early 2020. After each phone call, she wrote key concepts and pasted them on her wall. Slowly, the tags revealed an intricate culinary system with traditions, hierarchies, and hygiene standards.

Food was a central part of FARC life, explains 34-years-old Semillas, who says he joined the group voluntarily when he was 11. (Although international humanitarian law considers the recruitment of children as forced under any circumstance). After his father and grandfather were killed due to their pro-union political activism; he, his mother, and siblings had to constantly move to escape death threats, he says. He asked FARC members in his rural town if he could join. They agreed, despite Semilla’s mother’s pleas. “FARC gave me shelter and refuge. It saved my life,” he says. The organizations’ rules forbid him to actively fight until he turned 15. But he started cooking like anyone else.

“I will never forget my first ranchada [cooking shift],” he says. That first day, Semillas had to cook everything from white rice to fried meat and colada, a thick liquid mixed into agua de panela, a traditional beverage. He was guided by an experienced, old guerrilla who taught new guerrilleros all the “little secrets,” such as how to clean the rancha, or artisanal kitchen station, and how to knead and fry cancharinas. “We passed the knowledge from one generation to the next.”

An ecónomo oversaw the operation, painstakingly planning weekly menus, adjusting the meals to account for available ingredients and the intensity of the conflict, and creating individualized menus for sick or injured members. One former ecónomo told Fuenmayor Cadena that the communal pantry included 36 essential ingredients such as flour, powdered milk, sugar, panela, salt, coffee, and oil. Sometimes, despite living mainly in forest and jungle campsites, they even had access to processed foods and alcohol.

“As an organization mainly composed of peasants, they know the land better than anyone else,” Fuenmayor Cadena says. Cassava, rice, plantains, and corn were staple crops. In Semilla’s front, guerrillas often gathered fruits from the rainforest. Those fighting near the Andes mountain range cultivated potatoes and other cold-resistant vegetables. During the first decades of conflict, distant guerrilla cells even exchanged vegetables and fruits that each grew, and buried them to keep them fresh. The FARC managed cattle and had pork and chicken farms near distant villages, co-managed with local peasants. (Sometimes the peasants voluntarily helped, Cadena Funemayor says, and other times they were pressured.)

Inspired by the Vietcong, FARC rebels initially built underground wood-burning stoves, which released smoke in a controlled way, avoiding Army surveillance. “We would build them next to very large trees, so smoke will diffuse,” Semillas explains. Classic, time-intensive preparations were common, such as arroz empedrado (rice and beans), smoked meat, and arroz empastelado, a mixture of rice, onions, carrots, chili, and smoked pork.

“What surprised me the most were the ranchas (cooking stations),” Fuenmayor Cadena says. “[During calmer times] they were so huge they could feed 200 people. It’s like having a restaurant in the middle of the jungle.”

But meals changed when the conflict escalated and new air-surveillance technology gave the Army an advantage in the early 2000s. The FARC switched to portable gas stoves and created a new position, says Semillas: the hornillero, who was exclusively in charge of controlling smoke. Meals became less elaborate; stews and soups became the norm. Cancharinas, which lasted up to five days without losing its texture or flavor, and energetic mixes like minicui (powdered milk, water, sugar, crackers) and majule (smashed sweet plantain mixed with sugar and milk) prevailed.

The Army also burned the FARC’s crops, killed their animals, and limited food circulation in faraway villages, so guerrillas resorted to eating lowland pacas, monkeys, tapirs, and other wild animals. (Despite FARC’s environmental code forbidding wildlife hunting unless it was strictly necessary.)

In Colombians’ imaginations, these “weird” foods, and stolen cattle or chickens, became the staple guerrillero foods. This solidified the images of guerrilla members as enemies, almost savage-like figures that needed to be eliminated.

“This country has made sure, through the media, that we only receive this information [about FARC as terrorists],” says Fuenmayor Cadena. “The bribes to cattle ranchers, the theft of cows and pigs.” But she believes that, as 7,000 former guerrilla members return to Colombian society, food can be a way to humanize them.

Now, as former rebels reincorporate, the FARC foodways are mutating. There is a tension, explains Paula Natalia Caicedo Ortiz, Fuenmayor Cadena’s thesis advisor, between their regained Colombian citizenship and what she describes as a sort of “FARC citizenship” that defined most of their lives. (Many joined, either voluntarily or forcefully, as teenagers.) For example, when former guerrilla members first arrived in the Comunidad Noble y de Paz Marco Aurelio Buendía area, where Semillas lives, they kept cooking together at the rancha the government built for them. But after the government built houses for each former FARC member and their families, everyone started cooking at home, where kitchen duties have fallen on the shoulders of women, unlike their time in the guerrilla, when men and women cooked as equals.

These sudden changes need to be emotionally and psychologically processed, explains social worker Marta Inés Valderrama Barrera, who leads a multidisciplinary team at University of Antioquia that has been working with former FARC guerrillas. Government support focuses on aspects like living allowances and financing small businesses. “But the transition needs to be approached with much more delicacy and depth,” Valderrama Barrera says. Understanding FARC’s foodways could help former guerrillas transition into civilian life. Having conversations about food, Valderrama Valdez says, allows them to “recover that memory, not to remain in the nostalgia of life in arms, but as a possibility and a device for reincorporation.”

In Santa Lucía, a small village in Antioquia, former guerrilla members are planning to sell a cookbook of 36 FARC recipes they unearthed from their memories during Valderrama Barrera’s research, among other food-centered initiatives. In Chocó, former guerrilla women created the restaurant La Rancha de Mi Pueblo (My People’s Rancha), which serves foods with local ingredients and some traditional FARC dishes. In the Comunidad Noble y de Paz Marco Aurelio Buendía, Semillas and his peers are trying to grow a community garden to bring back a more diverse set of vegetables, as the groceries that the Colombian government sends them are less varied than their former diets. The community also created a “demonstrative traditional rancha” for an ecotourism project and is gathering support for an annual “Cancharina Festival” to showcase FARC cuisine.

“We want to show that people from FARC are not what the media says about us,” Semillas says. “We also have a heart; we also have feelings and stories, we fall in love, we love. We were like a society in the jungle.”

During a siege, desperation drove people to disinter skeletons from cemeteries.
food

These Mushroom Clouds Are Made From Actual Mushrooms

A team of artists create horror out of fungi.
food

Evelene Spencer was the force behind the wartime campaign that encouraged the country to love fish.
Video • Gastro Obscura

This eatery is emblematic of the connection between Jamaica and Nubia.
Want to see fewer ads? Become a Member.
From Around the Web
THE GASTRO OBSCURA BOOK
Taste the World!
An eye-opening journey through the history, culture, and places of the culinary world. Order Now