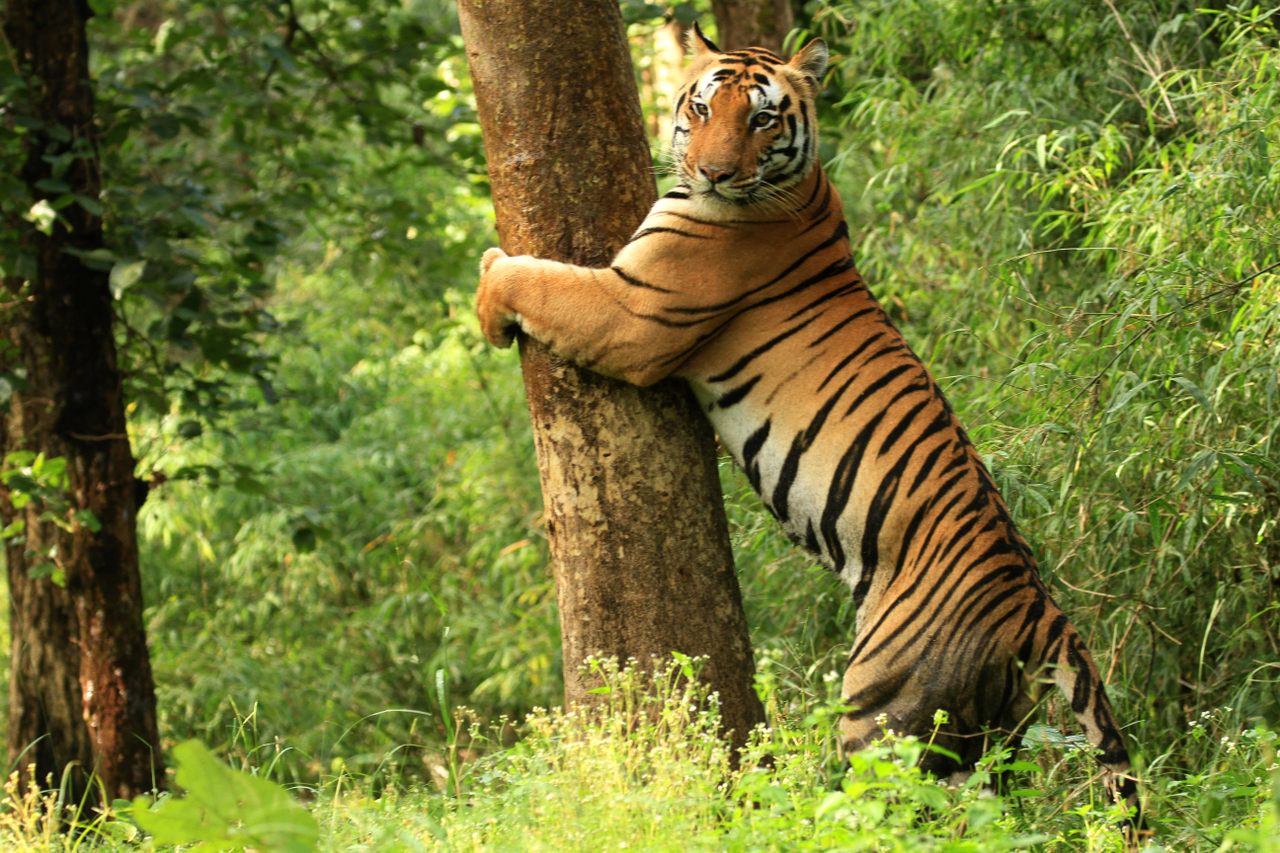 One of Kanha Tiger Reserve's revered residents: Conservation scientists are studying how villagers near the Central Indian park coexist with the big cats. Davidvraju, CC BY-SA 4.0/Wikimedia
In This Story
Destination Guide

When he was about six years old, Venkat Raman Singh Shyam’s father took him by the hand and led him into a dense forest, where tigers, hyenas, sloth bears, nilgai antelope, and wild boars roamed freely. Shyam’s family, which belongs to the Gond tribe, lived in a hamlet at the periphery of the Kanha Tiger Reserve in Central India. Kanha, home to thick groves of bamboo and slender-trunked trees, including sal and East Indian ebony, is the forest that provided the backdrop for Rudyard Kipling’s The Jungle Book.

As the pair went deeper into the thicket, they came to a solitary stone with a large, ochre cat painted on it. It was a totem of the tiger, covered in tangerine paste and decorated with symbols of the sun and moon above it. That was Shyam’s introduction to Baghdev—in Hindi, literally “tiger god.”

For centuries, indigenous communities in Central and Western India, such as the Gond, Warli, and Koli, have worshipped tigers and leopards. Big cat shrines can be found in countless small villages scattered across the wilderness, as well as adjacent semi-urban areas. Conservation scientists are now investigating whether these traditions of animal reverence have, in fact, mitigated negative human-big cat encounters. Preliminary research suggests that worship of the big cat deity translates into a greater tolerance of the animals and their behavior, even when it involves attacking livestock.

“We ask the deity to protect our families, and not harm our livestock or our fields,” says Shyam, whose family has honored Baghdev for generations. “In return, we promise to offer it a sacrificial goat or a chicken, along with a fermented alcoholic beverage made from the flowers of the mahua tree.”

For many indigenous communities in the region, tigers and leopards are the same animal, and the big cat deity they represent is known by different names: While the Gonds call it Baghdev, the Warlis know it as Waghoba, a combination of the Marathi words for big cat and community elder. Each shrine dedicated to the animal is marked by a stone statue or a wooden panel made of teak, painted or engraved with the animal’s image. The idol is often placed under a thick canopy of lush green trees. “Just like the tiger should roam freely in its natural habitat, the deity too, should exist unbounded,” says Rajesh Chaitya Vangad, an acclaimed Warli artist who grew up listening to an intricate crossweave of mythical tales and anecdotes about the forest and its inhabitants. In some villages, however, particularly those on the fringes of more populous areas, the statue or image is placed under sun-dried thatched roofs—or, if the village can afford it, installed within a modest temple, where it often shares space with other idols.

The practice of worshipping the deity has existed for “hundreds of years, long before there were kings and queens,” says Vangad. Waghoba is viewed as a village’s guardian and gatekeeper; as such, most shrines are located at the hamlet’s entrance, but additional shrines exist “higher up in the mountains,” says Ramya Nair, a field researcher for Wildlife Conservation Society-India. Nair has studied how Warli people live side-by-side with wildlife and was the lead author of a paper on the topic, published in June in Frontiers in Conservation Science. Her team’s research suggests that the centuries-old tradition of worshipping Waghoba is important for present-day wildlife conservation. Because the indigenous communities revere the animals as incarnations of a god, they are less likely to try to eradicate the predators from the area, even as more of the land is used for agriculture and other human activity.

That reverence is renewed in a two-day ritual held in each village once or twice a year, depending on the tribe’s tradition. Villagers gather to tend to the shrine and the ground around it, and to pray to the deity. In return for the tiger god’s protection, the village offers it a sacrificial goat or chicken—“sometimes a wild pig is sacrificed as well,” says Shyam—along with coconuts, rice, flowers, mahua drink and raal, solidified resin from the sal tree. The figure of the deity is smeared with saffron or ochre paste as the village fills with songs, chants, and drumming that lasts for hours. After the sacrifice, the animal’s severed head is offered at the shrine’s altar; its meat is distributed among the members of the community as prasad, or blessed food. Such rituals, say practitioners, are an integral part of each village’s cultural fabric.

“The tiger god definitely exists,” says Ullas Bhaguji Bhagat, who belongs to the Mahadeo Koli community in Palé, a village in Maharashtra. “If for some reason we cannot hold the ceremony or are unable to complete it, someone in our family is bound to fall sick or get wounded.” Wide-eyed, he adds: “Years ago, a tiger did visit our village. We hadn’t performed the ceremony that year, so it attacked the cattle…We went to the temple and performed the necessary rituals. After that, the tiger hasn’t stepped inside our village.”

Nair’s research found that big cat attacks, instead of shaking the villagers’ belief in the deity, were interpreted as a consequence of its wrath. “People often tend to associate livestock depredations as a fault of their own, especially if they feel that they may have made a mistake in performing the rituals correctly. Such reasoning gives them a way to cope with their loss,” she says.

Whether the reverence shown for the animals has resulted in fewer attacks has not yet been studied but, notes Nair, “At the end of the day, it’s a belief. Whether we try to make sense of it or not, it is what they believe in.”

University College London conservation anthropologist Sahil Nijhawan believes that modern conservation strategies could take a cue from indigenous traditions of tolerance and respect. “Our current model of conservation is founded upon the idea that in protected areas we should eliminate the people, and outside protected areas we should eliminate the wildlife,” says Nijhawan. “The idea of coexistence, however, does not rest on elimination of one or the other; it rests on tolerance from both sides. Waghoba is one such example where certain communities have found ways to meaningfully share their landscape with dangerous animals, without having to eliminate them.”

The Gonds, for example, believe their identity is inextricably linked to every living being in the forest. “Not just the tiger, we pray to snakes, peacocks, deer, porcupines, frogs, even crabs,” says Shyam. “We have been born in nature and so have they. Our lives are braided together and we are incomplete without them. Therefore, we must live with them as peacefully as possible.”

Shyam’s attitude mirrors that of individuals Nair and colleagues interviewed as part of their extensive ethnographic study. “We came across multiple worshippers who claimed that the tiger deity protected them,” says Nair. “All of their personal stories are data, but not in a scientific format. However, these narratives are important because they give you a glimpse into how people feel and how crucial their relationship is with the big cats.” In the Frontiers paper, Nair and her coauthors wrote: “It is worth reflecting on how fleeting our conservation interventions can be in comparison with something as resilient as the institution of Waghoba.”

How to Buy Pink Pineapples and Fruitcake Off Etsy

For centuries, hundreds of shrines have preserved crucial information about the marine mammals' diversity and distribution.
animals

A conservation biologist in Argentina once hosted one of the animals in her living room, but finding them in the wild has proven far more difficult.
Video

1:34
Sponsored by Visit St. Pete/Clearwater
Want to see fewer ads? Become a Member.
From Around the Web
Atlas Obscura Trips
Delhi and Rajasthan: Colors of India
View This Trip
Thanks for sharing!