The Holocaust-Surviving Violins That Were Quarantined Beneath a California Stage - Atlas Obscura
Want to see fewer ads? Become a Member. 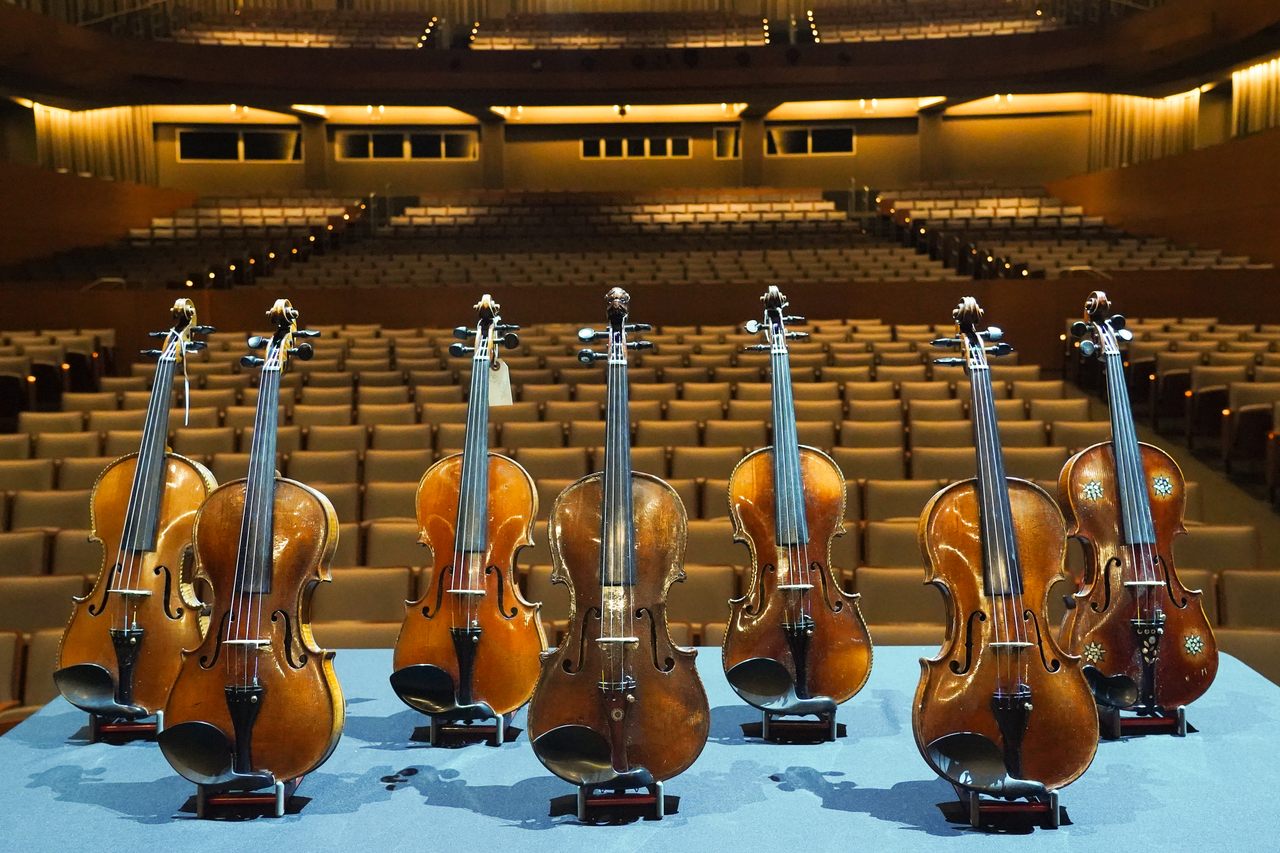 Some of the Violins of Hope on the stage of The Soraya. Courtesy Ricki Quinn / The Soraya
In This Story
Destination Guide

In March 2020, as each hour brought updates on the spread of COVID-19 and the looming possibility of lockdown, a group of visitors with rather unfortunate timing appeared in Los Angeles. Dozens of violins from Israel, fresh off a run of concerts in San Francisco, had arrived in town for a series of events—events that were just about to be cancelled. So, like many musicians themselves, these instruments had to spend the next several months in quarantine, emerging only recently for filmed performances before they were sent back home to Tel Aviv.

Throughout their long shared history, these violins had already endured far worse. Many of these instruments, which belong to a collection known as the Violins of Hope, are in some way connected to the Holocaust. Their prior owners include scores of Jewish musicians, some of whom died in the Nazi genocide and some of whom survived it. Of the 88 violins that make up the collection’s full inventory, some 60 had been dispatched to Los Angeles for a spring concert series at the Younes and Soraya Nazarian Center for the Performing Arts (commonly known as The Soraya). In an effort to protect the instruments from theft or other damage during their unexpected time in storage, they ended up beneath the concert hall’s stage for months. It was another chapter in the long story of these instruments that lived history.

Each violin tells its own tale, some of which are particularly vivid. One violin survived the Auschwitz death camp, along with its former owner, who played the instrument for the entertainment of his Nazi captors. After the war, penniless in a Displaced Persons camp, the musician sold his violin to an aid worker, whose son later donated it to the Violins of Hope. Another instrument was thrown out the window of a train transporting French Jews to Auschwitz, as its owner hoped a passerby might find it and keep it safe. The man who retrieved it kept it for the rest of his life, and it was donated to the Violins of Hope after his death. The collection also includes a tainted violin that is never taken out for performance: Inside the instrument, an anti-Semitic craftsman scrawled the words “Heil Hitler 1936” alongside a large swastika, while repairing the violin for a Jewish player. It’s not clear whether that musician was even aware of the inscription, as a later owner donated it to the collection after discovering its secret.

The violinist Niv Ashkenazi first learned of the Violins of Hope in 2015, when the Cleveland Orchestra featured the instruments in a concert series. Since 2017, he has kept one of the violins on semi-permanent loan, making him the only musician in the world to have one of these instruments in his possession. In an email, he says he doesn’t know much about this violin’s backstory, just that its former owner survived the Holocaust and immigrated to the United States. When visiting the collection in Tel Aviv in 2017, Ashkenazi writes, “I tried about 10 of the instruments they didn’t need for the touring collection at that point in time, and this was the one that opened up and spoke to me the most.” When it came time, however, to record a performance at The Soraya before the violins went back to Israel, Ashkenazi chose to play the violin that survived Auschwitz. Those filmed performances, which also featured violinists Lindsay Deutsch and Janice Mautner Markham, will be shared at a later date, the closest possible approximation of the concerts that couldn’t be held.

Ashkenazi writes that, in recent years, he’s focused on using the Violins of Hope to play music by composers who were affected by the Holocaust, including Szymon Laks, who survived Auschwitz; Mieczysław Weinberg, whose family was murdered, though he managed to flee Poland; and Robert Dauber, who was murdered at the Dachau concentration camp. “It has been a chance for me,” Ashkenazi writes, “to discover beautiful pieces that deserve to be included in the main violin repertoire.” Once the violins can be taken out again for live performances, however, they may serve another purpose. A recent survey found that many young Americans lack basic knowledge of the Holocaust, with 63 percent of respondents unaware that six million Jews were murdered in the genocide. Some of them held these very instruments in their hands, and few things can make that history more present.

Why Birds Changed Their Tune During the Pandemic

We don't know if they'll ever sing their old songs again.
pandemic

Meet Koronon—cute, cuddly, and a big fan of masks.
garbage

They whiled away the dark months with poetry, banjos, and Russian grammar—and you can, too.
Video • Wonder From Home