For Italy's Musical Woods, Threats From Without and Within - Atlas Obscura
Want to see fewer ads? Become a Member. 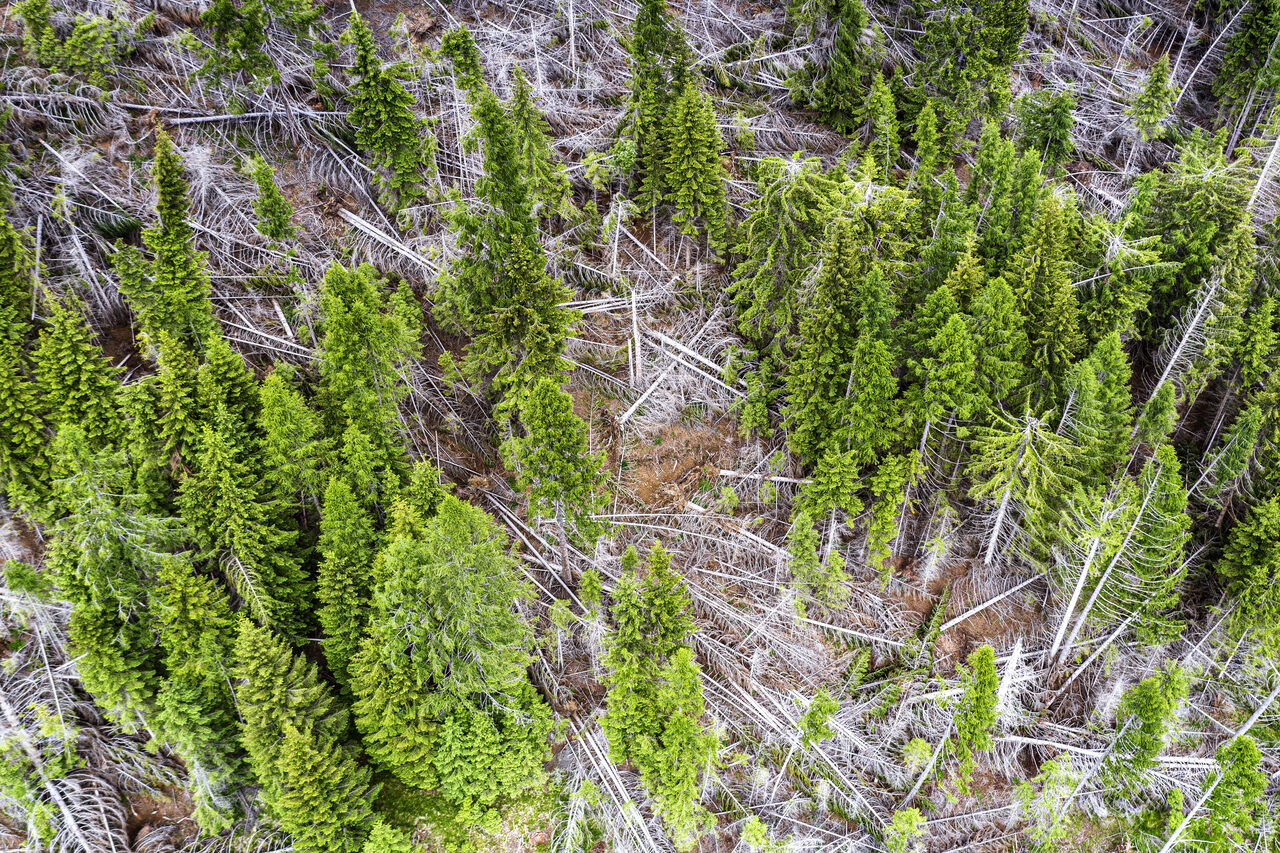 The storm known as Vaia felled millions of trees in the Alpine region of Italy in 2018. Roberto Moiola/Sysaworld/Getty Images
In This Story
Destination Guide

At the edge of the road there is a heap of about 200 spruce logs, each approximately 30 feet long, all felled by a recent, severe winter storm. It’s late spring, but the wood is still covered with a dusting of snow. A middle-aged man on his knees, wearing hiking boots, jeans, and a waterproof jacket, is examining a section of one of the trunks, looking for mold or knots. He calls out to the operator of a crane, and asks him to turn the log so he can have a better look. If it meets his needs, he will take a can of black spray paint and mark the end of the log with the letter “C,” and then ask the operator to load it onto a flat-bed trailer. The rest go into another pile.

Though all the logs look identical—same length, straight and hearty—for Fabio Ognibeni, not all the spruce trees of Val di Fiemme, in the Alpine region of Trentino Alto Adige in Italy, are the same. Ognibeni estimates that just two to three out of 1,000—trees that he can recognize by sight—will make beautiful music. He can see how this wood will resonate in prestigious auditoriums and concert halls, in schools and homes around the world, in the form of grand pianos, violins, harpsichords, and harps. Ognibeni is the owner of Ciresa, a company that supplies “resonance wood” to luthiers and piano-makers, including globally known brands such as Fazioli, C. Bechstein, and Blüthner.

Sound is produced by a piano when the vibrations of the strings are transmitted, via a bridge, to the soundboard. The music you hear is the vibration of wood transmitted to the air. This wood. Ognibeni’s wood. “If you want to see the soundboard of a piano you have to lie down with your head up. Ninety-nine percent of people don’t even know it’s there,” says Ognibeni “Many pianists are really convinced that it is the keys or at most the hammers that make their instrument sound, many don’t know where the soundboard is. I know it’s hard to believe, but that’s the way it is.”

It works similarly for the violin, but not in secret. The body of the instrument—belly, ribs, and back—is the soundboard. This is Ognibeni’s wood as well, sold to luthiers who then carve it to create the tone they’re looking for. The most famous luthier in history, the Italian Antonio Stradivari, who lived between the 17th and 18th centuries, used spruce from the Val di Fiemme. Today, his famed violins still sound very good and can command millions of dollars.

Spruce is all over the Italian Alps, but it is only the ones that grow in this specific valley that are so coveted for their musical qualities. There are two reasons, Ognibeni says: “One is orographic, the second is cultural. The slopes of the Lagorai mountain chain, one of the two that delimit the valley, are exposed to the north-northwest, so they receive less sun and this allows trees to grow slowly. In addition, there is a lot of rock and it is not very calcareous, so the roots absorb less minerals and the wood is lighter than the forests dominated by the Dolomites.” This is an essential quality: The heavier the wood, the less it vibrates. Of course, there are woods that are even lighter than spruce, but they don’t possess the same fiber quality.

The cultural reason is that since the Late Middle Ages, the woods of Val di Fiemme have been managed by a local authority, Magnifica Comunità, that has always looked after and managed its forests with care and competence. “Here the forest has always been cultivated by selecting the plants, making them grow evenly, at the same height, so that little light can filter through. That’s why the trees are tall, straight and with very few low branches, which, without direct light, dry up immediately,” Ognibeni says.

It only takes Ognibeni a few seconds to know how the trunk will sound. The only tool he uses are his glasses. First he looks at the growth rings on the outermost layers of the trunk, the only part that is used for soundboards. “The fiber has to be tight and equidistant,” he says. “Even just two or three wider rings are enough for the trunk to be discarded.” A wider ring means that the tree has grown more, often because it received more water than usual. Ognibeni fears that climate change will mean less wood for musical instruments, as both drought and storms become more frequent. Ognibeni also looks for knots, the circular or elliptical scars left by old branches. “A knot means a difference in density in the wood, as if it were a brake on the rush of music,” he says. And then there are mold stains: If they are very large, the trunk must be discarded. This pursuit of only the most perfect logs is why resonance wood costs $195 dollars per cubic meter, compared with $85 or less for logs—still of high quality—used for furniture.

The wood Ognibeni’s company, Ciresa, selects is then dried and seasoned for a year, and then examined again before processing. By that stage, it is more or less perfect. Any flaws, already few, are eliminated by company craftsmen who make up the soundboards of the pianos by piecing together wood from different trunks but with very similar fibers, like a puzzle. The lines of the rings are equidistant from one another and regular, as if drawn with a ruler. “Imperfections are not allowed, but at the same time we are talking about an organic material, not plastic. And that’s why it can’t be mechanical work,” says Ognibeni as he looks out over an empty factory, ready to come back to life the next morning.

In addition to climate change, there is a more pressing threat: Ips typographus, the small, dark, pill-shaped European spruce bark beetle. These insects penetrate the bark, reproduce, and suck the sap until the tree dries up and dies. Under normal circumstances, healthy trees have defenses against the beetles, which keep their population in check. But at the end of October 2018, the most powerful wind storm ever recorded here, Vaia, destroyed almost 100,000 acres of woods in northern and northeastern Italy. Gusts of over 120 miles per hour felled millions of trees. These carcasses, still rich in sap but defenseless, fed a beetle explosion, despite efforts to remove the logs as quickly as possible. Now, with a full-blown outbreak of spruce bark beetles, even the healthy trees are at risk.

Red-brown patches can already be seen on the slopes of valleys in the region: standing trees, desiccated and dead. “The bark beetle can equal and even overcome the damage caused by a wind storm,” says Andrea Battisti, an entomologist at the University of Padua and one of the leading experts on bark beetles in Italy. The beetle proliferates when the temperature reaches 65 degrees Fahrenheit, and when this happens, technicians, forest service officers, and experts place hundreds of pheromone-based traps and baits throughout the Alps.

In the Gares Valley, east of Val di Fiemme in Veneto, Battisti explains the traps to a group of students. The traps are three-foot-tall plastic “houses” that resemble apartment mailboxes. They have drawers at the bottom where the trapped insects end up. Every 10 days the traps are emptied and the victims tallied. In mid-May in Veneto, the average was 4,700 insects per trap. At lower altitudes it can reach 25,000, three times the critical threshold. And that was just in the spring, before summer’s warmer temperatures.

Another method for containing the outbreak is a “bait,” when foresters fell five or six trees and then “decorate” them with the pheromones. “The insect is attracted and begins to reproduce under the bark,” says Valerio Finozzi, technician in Veneto. “After a few days, if we see that the infestation is at its peak, we remove the bark so that the larvae are killed by the sun or by the rain.” The principle, Finozzi says, is to sacrifice a few trees to save hundreds.

But it is an uphill battle. “We can monitor and work to keep it under control, but we cannot hope to eliminate the bark beetle,” says Renzo Motta, a professor of forest ecology and forestry at the University of Turin. “We have to take into account a share of damage, which is inevitable.”

Ognibeni remembers the days after the fateful 2018 storm well. “Val di Fiemme was hit hard. The idea that among those felled trees there were hundreds that could have played music made me sick,” he says. “So we worked like crazy to save everything that could be saved, before it rotted, and we discovered we had many ‘friends.’” In those days Ciresa launched a crowdfunding campaign to finance the purchase of thousands of cubic feet of timber. “The idea was that all that can become music, it must become music, not wardrobes or skirting boards,” Ognibeni says. He was aiming for €40,000. He received €230,000, from all over Italy and abroad.

“The solidarity of those weeks gave us the push not to give up,” he says. “And today we are already starting to pay the money back to the first donors. Because for us, that was just a loan.” Had it not been for that feverish recovery operation, he says, the company would have been out of work for some time because after the damage of Vaia, logging has been suspended in Val di Fiemme and many other areas in the Alpine arc, leaving additional storms as the only source of fresh wood. “But rather than making boards with a poorer wood,” he says, “I would have preferred to grit my teeth and close the business for a while.”

Plus four ways to eat and drink coffee that involve the whole plant.
forests

Women in Northern Kenya Rally to Save a Forest

Just a few years ago, Samburu women were using Kirisia Forest for firewood and charcoal. Now they're protecting it, and managing it sustainably.
forests

Once thought to be a burden to neighboring trees, these 'ghosts of the forest' may actually benefit them.
Video • PinDrop