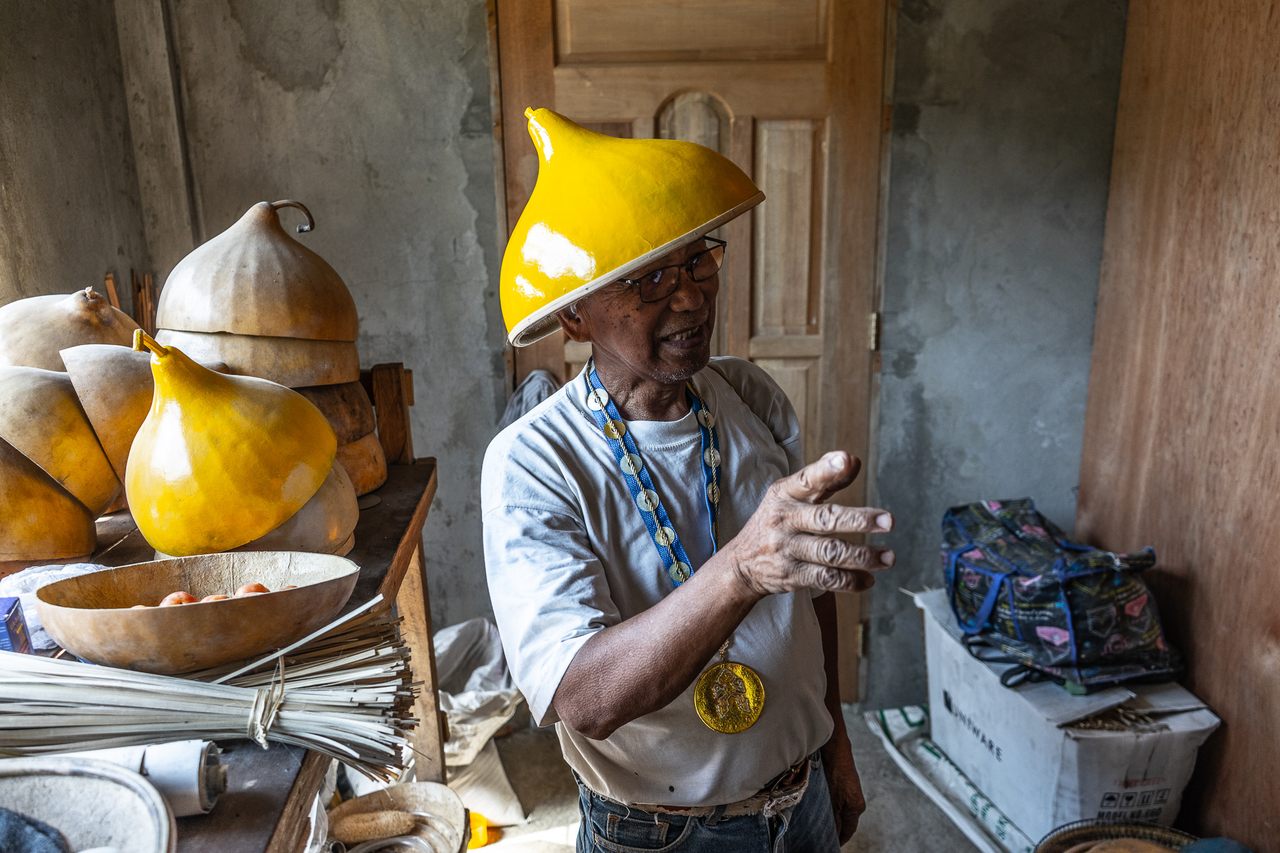 Teofilo Garcia poses by a pile of hats in progress. All photos by Richard Collett
In This Story
Destination Guide

In a remote mountain village in the Northern Philippines, Teofilo Garcia greets me outside his workshop. Atop his head, a finely polished, yellow-orange hat glints in the sunlight. His workshop contains an abundance of similar hats, all in various stages of completion. Strips of bamboo are strewn across the floor, and bundles of rattan are piled on the counters. Some of the hats are bright in color, while others are dull and grimy, still caked with mud.

That’s because these are tabungaw hats, and Garcia has painstakingly handcrafted each one from a gourd grown in the fields surrounding his home.

For centuries, the Ilocano people in Northern Luzon, where Garcia lives, have worn these hats, which are called, like the vegetable they are formed from, tabungaw. High-school children wore them for graduations. Farmers sheltered themselves under their brims while ploughing fields. They’ve even been donned by revolutionaries charging into battle against the Spanish.

But, now, Garcia is one of the last tabungaw hat makers left in the Philippines. He may be the very last.

At 78 years old, Garcia has been crafting tabungaw hats for much of his life. In the workshop, after turning down the radio volume (he is deaf in one ear), he explains that his father taught him to make his first at age 15. “It’s a farmer’s hat and very practical for working in the sun,” he says. “When I was young, I remember everyone made them at home, but now it’s easier to buy a baseball cap at the market.”

For Garcia, making hats is a seasonal process. In June or July, he plants tabungaw seeds. They grow on the ground, but during the rainy season, he hangs the growing gourds from bamboo supports to protect them from bugs. In the fall, he harvests his hats.

Garcia gestures to the pile of green gourds drying in the mid-day heat outside the workshop, where he stacks the vegetables to harden the exterior. Their insides, though, become soft and mushy. “I leave them on the ground so the marrow inside is eaten by ants,” Garcia says. “It’s the best way to clean them!”

Even as a septuagenarian, Garcia does most of the work himself. Once the gourds are prepared and cleaned, he polishes and varnishes the shell to its bright-yellow or orange hue.

“I used to travel from village to village selling my hats,” Garcia says as he demonstrates how he weaves soft bamboo mesh to form comfortable padding inside the hat, which he strengthens with rattan that he collects in the mountains. “I went to the cockfighting arenas across Abra and sold them there too. There used to be more hat makers then, but now, I think it’s just me left.”

In Rizal Park, in the center of the capital city of Manila, a bust of Filipino revolutionary Diego Silang depicts him wearing a tabungaw hat. In 1763, Silang led a revolt against Spanish colonial rule. In a study of the revolt, scholar Fernando Palanco writes that while Silang himself was not a farmer, the core of his followers were “the least Hispanized and the poorest residents” in Ilocos. Tabungaw hats became such a symbol of revolution that the Spanish stopped Ilocanos from wearing them.

“When I was younger, I remember being told stories that tabungaw were worn into battle against the Spanish,” Garcia says. Silang was assassinated at age 32, in a hit ordered by Church officials to end his rebellion.

In an era of baseball caps (often worn by farmers in rice paddies) and indoor office work, wearing a tabungaw hat today is equally symbolic—a fact represented by a small monument in front of Garcia’s workshop, given to him in 2012 by the Filipino government, that announces that he is a “National Living Treasure” for keeping this tradition alive. Rather than use smoke to harden the hats for fieldwork, as he once did with an open fire, Garcia now uses varnish. The yellow hats stacked under a table are for an upcoming school graduation. Garcia also receives orders from politicians and generals, as well as the odd overseas hat collector.

The schoolchildren’s hats resemble the simple farmers’ hats of old, while other orders are more intricate, in line with how tabungaw hats once indicated social status. To make them, Garcia weaves thin strips of rattan into unique designs around the rim. “High ranking officials in Abra would wear the most elegant of these hats at ceremonies,” he says.

Crafting vegetables into hats has become an excellent niche business for Garcia, but he’s exasperated that no one wants to take up his mantle. For years, he’s been searching, but even with funding from the government, he can’t entice any young apprentices in Abra to stay for more than a few days. His five children help occasionally, but they don’t see it as a career.

If Garcia can’t find an apprentice, he may well be the Philippines’ last tabungaw-hat maker, and the last person to lovingly craft a symbol of Filipino identity from nothing but seeds, water, and sunshine.

What’s the perfect occasion for a tabungaw hat? Head over to the Atlas Obscura Community Forums, and share your comments and thoughts!

The 'Dead Sea of Senegal' Is a Shocking Shade of Pink

The Disappearing Philippine Tradition of 'Souling' for Rice Cakes

Filipino tribal tattooist Fang-od Oggay has built an economy on the back of skin art.
islands

Oversized, fluffy rodents in the Philippines may have been hunted by our evolutionary cousins.
Video • PinDrop

An eatery in a shallow river where diners can enjoy their meal mere feet from the base of an artificial waterfall.
Pringy, Switzerland