The 'Dead Sea of Senegal' Is a Shocking Shade of Pink - Atlas Obscura
Want to see fewer ads? Become a Member. 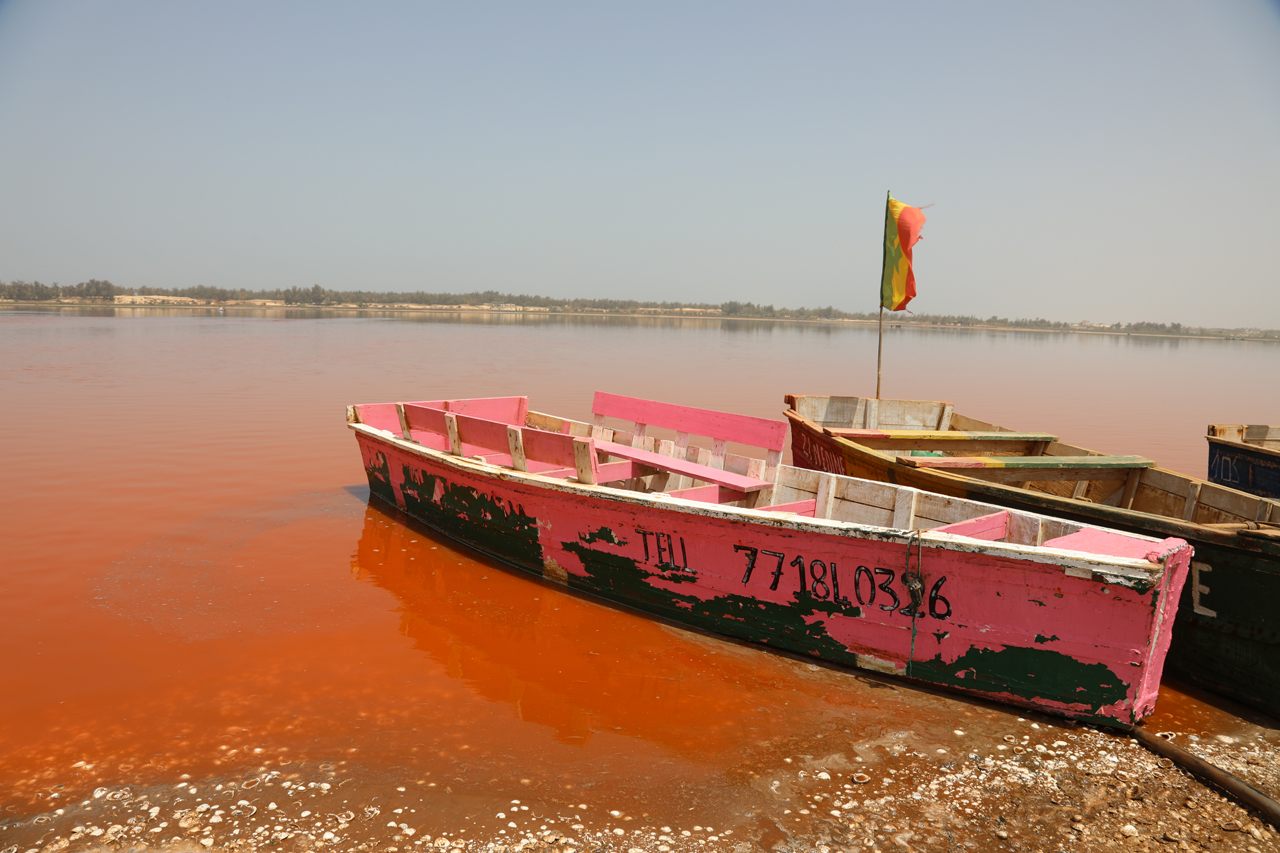 A pink boat for a pink lake. The water's color changes based on weather patterns and times of day. Peter Yeung
In This Story
Place

A resonant crunch reverberates as Boubacar Keita thrusts his wooden baton into the pink water. Another blow triggers a pulsating, circular ripple that seems to continue on for half a mile. A third swing brings a conclusive crack, and Keita’s figure plunges below the surface.

A few moments later he resurfaces, waist-high and dripping, sparkling in the sunlight. Contrasted with the radiant body of water he’s wading in, it makes for a biblical scene. But the traces of white residue that coat his sinewy torso reveal what he’s searching for: salt.

As much as 11 ounces of the mineral are contained in a quarter-gallon of water in the Lac Retba, aka the Lac Rose or Lake Retba—a lagoon on the edge of the Cap Vert Peninsula, about 22 miles northeast of Senegal’s capital, Dakar. That’s 10 times the level found in the nearby Atlantic Ocean, just a thousand feet away, and enough to rival Utah’s Great Salt Lake, Australia’s Spencer Lake, even Lake Retba’s famous Middle Eastern cousin, the Dead Sea.

A kind of microalgae known as Dunaliella salina thrives in this extreme salinity. By producing a pigment from the beta-carotene family, in order to maximize the amount of light it can absorb, it forms one of the natural world’s most mesmeric sights.

At the height of the dry season, from January to March, when the midday sun blazes unforgivingly and strong winds blow in from the Atlantic, Lake Retba is at its most colorful: a beguiling sherbet pink. As weather patterns and times of day change, a glorious spectrum of shades emerges—from strawberry milkshake and Pepto-Bismol to coral, fuchsia, and an almost chocolate brown. The pigment even lends the waterside bushes of samphire, a plant-like vegetable that is typically green, an intense magenta hue.

Bathers are drawn by the great beauty, and buoyancy, offered by the salt. Workers from all over West Africa are drawn here too, to mine the mineral that forms the floor of the lake. Since the 1970s, when economic woes triggered a search for new streams of income, Lake Retba’s salt crop has been harvested year-round. Each year the lake—two-and-a-half miles long, half a mile wide, and 10 feet deep (50 percent of which is the submerged salt crust)—hosts some 3,000 laborers.

Most work for themselves. Slim profit margins and low salt yields mean there’s not enough money here to draw big businesses. But it is a job, and collectively these miners dredge up and extract nearly 60,000 tons of salt each year.

Keita, a 25-year-old from Mali, is among them. Every morning he and his fellow workers take wooden boats to the pink waters in search of salt. They rub shea butter—derived from the nuts of local trees—into their skin to protect it from the corrosive effect of the saline, which can cause cuts and abrasions, and the punishing tropical heat, which can reach up to 100 degrees (Fahrenheit). They also apply strong glue to seal the wounds they acquired the day before.

It’s backbreaking labor—the opposite of la vie en rose. Keita must split the salty lakebed before he can shovel weighty piles of salt onto his wooden boat. The mineral can be grayish when it’s first extracted, because of the clay contained in the soil, and must be strained through a giant sieve. Like a Venetian gondolier, Keita guides his pirogue back to the shore once it’s full. He usually collects five boats’ worth of salt a day.

But his earnings are scant. Around $35 (in U.S. dollars) is paid for each ton of salt gathered—a week’s work.

“It’s very tranquil here, and it is beautiful,” Keita says. “But the work is very tiring. ” His lack of education and qualifications, however, mean that his options are limited—and the daily grind must go on. “If I had the choice I would leave,” he says. “I’m at the bottom rung of life here.”

The collected salt produces a sci-fi landscape, with mounds like a Chinese karst region lining the shallow lagoon. Women, who work only on land here, carry the salt left by miners—either in boats or on the water’s edge—over to the hulking mounds nearby, one 55-pound bucket at a time. These contain crystals the size of a fist—a sort of rougher, hailstone-size cousin to Pink Himalayan salt. Some piles grow large enough to climb, offering a fine vantage point to survey the surroundings.

The value of iodized salt has risen in recent years—a positive development for at least a couple of reasons. One of them pertains to health: Millions of babies around the world, particularly in Africa, are born each year at risk of brain damage due to a lack of iodine in their diet. But only about half of all edible salt in Senegal is iodized, even though it’s a key ingredient in many foods. (Local fishermen use it to preserve their haul, as fish forms a key part of Senegalese cuisine—in particular the national dish, a rice-based stew called thieboudienne.)

But thanks to the aid of local charities, salt workers have begun to add in the supplement, with a mixing machine, after the salt has been dried.

The other benefit is economic: Iodization can increase the value of the salt by up to 50 percent.

Today Lake Retba is under consideration to become a UNESCO World Heritage site. If it does, a still brighter future may be in store for this strange pink home to humanity’s most important seasoning.

The Japanese Ghost Town Buried Deep in a Canadian Forest

Yuncheng Lake is one of the country's oldest salt-production sites.
lakes

Conservationists were baffled when hundreds of elephants died in the Okavango Delta this summer.
lakes

The Glittery Legacy of Lead at a Historic Native American Site

A shiny mineral called galena, once prized by the Mississippian people, left its mark on the soil.
Video • PinDrop