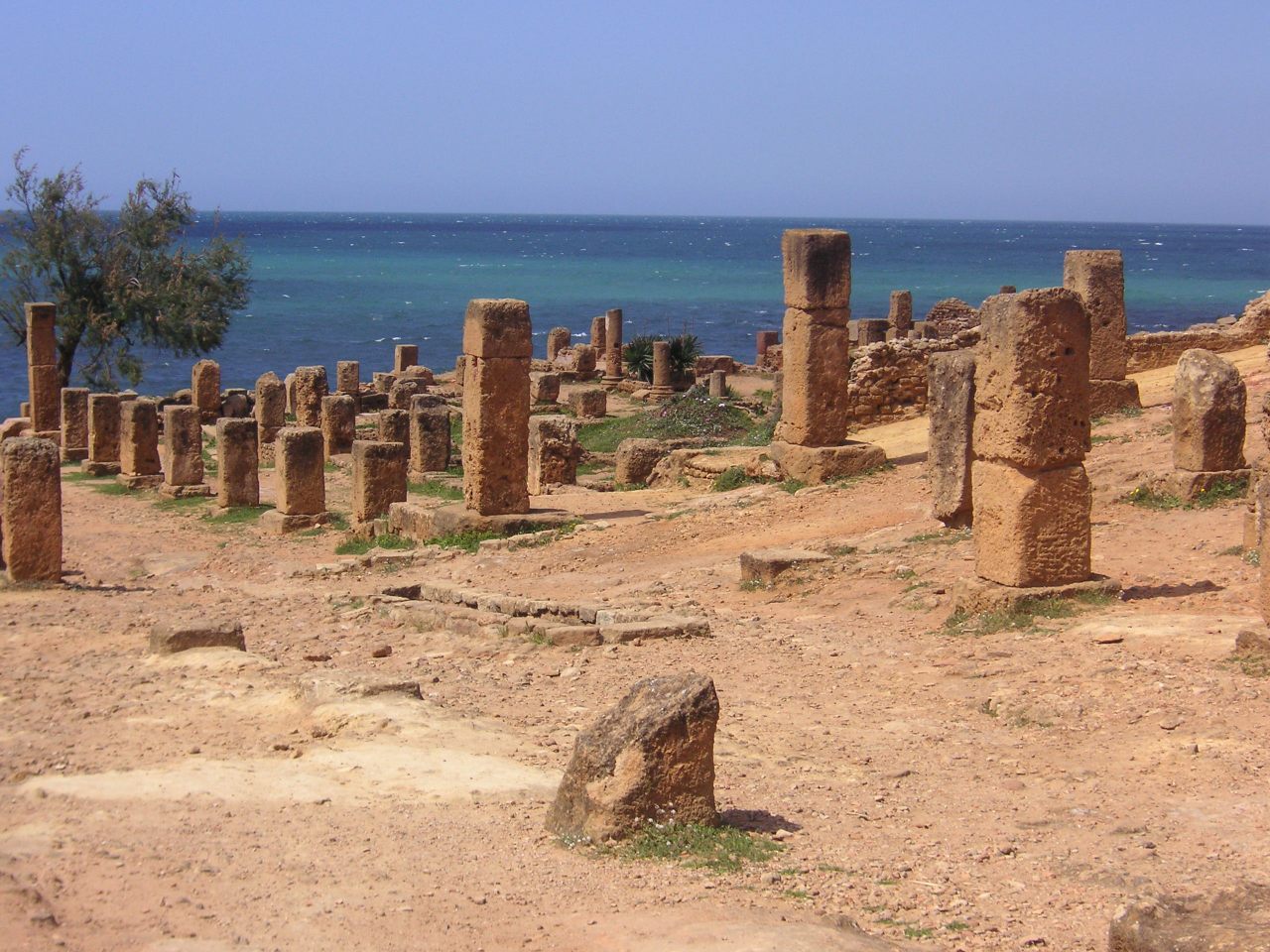 Along the rocky, rumpled Algerian coast, just east of where the bulky silhouette of Mount Chenoua slides into the Mediterranean, the sea and bureaucratic indifference may finally do what the Vandals did not.

There, for more than 2,500 years, through a succession of civilizations both local and foreign, has stood Tipasa. Considered one of the most important archaeological sites in North Africa, Tipasa is home to Phoenician and Mauretanian tombs, Roman fortifications and an amphitheater, bath complexes and an early Christian basilica. Tens of thousands of people have lived there at different points in its history. In its architecture and its graves, Tipasa recorded a millennium of unique multicultural exchange, of trade, innovation, conflict, conquest, and colonization.

After more than a millennium of activity, Tipasa fell into ruin in the sixth century. Both its main complex on the coast and an inland monumental tomb were all but forgotten amid the olive trees and slender pines. Most of the ancient city, in fact, remains buried beneath sediment up to 12 feet thick. For the last few decades, however, what’s left of Tipasa’s past has been increasingly hemmed in on three sides by the expanding modern town of Tipaza. And to the north, the waves lap ever closer.

Despite its precarious location, the complex of tombs, defensive walls, colonnades, and mosaics still tantalizes with echoes of its past as a cultural crossroads. What’s special about Tipasa, a UNESCO-designated World Heritage Site since 1982, is “the rhetoric of its landscape, the (shared) presence of history and archaeology, culture, nature, and architecture. It’s the spirit of the place,” said Lynda Aoudia Benali via email. A lecturer at Algeria’s Université Mouloud Mammeri de Tizi-Ouzou, Aoudia Benali has studied Tipasa and the ongoing challenges from both rapid urbanization and insufficient site management.

Now, Tipasa is entering a new chapter, perhaps its last: It’s become a symbol of an entire continent’s heritage in crisis. In a recent Nature Climate Change paper, a multidisciplinary team reported the results of unprecedented, painstaking work mapping how sea level rise is affecting nearly 300 World Heritage Sites around Africa’s roughly 20,000 miles of coastline. About 20 percent of the sites examined, including Tipasa, are already at heightened risk from flooding and erosion. By 2050 that figure is expected to more than triple.

“We had no idea before this work started how many coastal African heritage sites were at risk from climate change,” says University of Cape Town’s Nick Simpson, a coauthor who studies climate change risk and adaptation. “I don’t think anyone on the team expected this number of sites to be exposed.”

While some previous research had modeled the effects of sea level rise on select African heritage sites—a 2018 Nature Communications paper, for example, included some North African sites in an overview of Mediterranean World Heritage Sites at risk—the new research is unprecedented in its scope and detail. “We are the first to comprehensively map and model World Heritage Sites, Tentative Sites, and Ramsar Wetlands for the entire African coast,” says coauthor and University of East Anglia archaeologist Joanne Clark, naming different UNESCO designations for sites of outstanding value.

The sites identified at greatest risk in the paper span the incredible cultural complexity and rich biodiversity of Africa itself, from the ruins of a British fort that held enslaved people on tiny Kunta Kinteh Island, where the Gambia River opens to the Atlantic Ocean, to Togo’s Aného-Glidji, established in the 17th century, and still the seat of power for rulers of regional clans. Sites of particular natural value mapped in the project include Cape Verde’s Curral Velho wetland and Aldabra Atoll in Seychelles, home to most of the world’s giant tortoises.

Tipasa, in many ways, encapsulates the multiple challenges these sites face. As sea levels rise, the locations become more prone to both flooding events, including storm surges, and coastal erosion. “Tipasa is considered a very high vulnerability area in the Algerian space, in terms of natural disasters,” said Aoudia Benali. She added that, in addition to the direct threat from the sea, the remaining architectural features are also scoured by wind-driven salt and sand.

But like many of the sites studied, sea level rise is, for Tipasa, just the latest in a long list of modern existential threats. In 2002, UNESCO added the site to the World Heritage in Danger list. Inadequate management, according to UNESCO, had left Tipasa vulnerable to deterioration and vandalism—the latter a somewhat ironic twist given that Tipasa weathered a brutal fifth-century invasion by the actual historical Vandals, a Germanic people from what is now southern Poland.

The site’s 21st-century problems have only increased in the last two decades; UNESCO has repeatedly threatened to strip the site of World Heritage status. As recently as 2021, the organization noted a litany of problems at Tipasa, such as modern construction, including a proposed port, that threatened the site’s integrity.

The crisis facing Tipasa and other heritage sites along Africa’s coast is about more than preserving the past. These sites are often significant to the present—and the economic future—of the communities surrounding them.

“Many African economies are highly dependent on heritage tourism. Perhaps more importantly, many local and Indigenous communities have heritage-dependent livelihoods,” says Simpson. Despite the sites’ economic value, he adds, many lack both recognition and adequate protection from a variety of threats. Simpson believes an increase in tourism to sites such as Tipasa could boost their profiles within their countries’ borders, garnering more attention and ultimately improving management while also providing local communities with needed cash.

Of course, tourism has downsides. Increased traffic means more footfalls on what could be fragile areas, more trash, and more strain on local infrastructure already stressed by a growing population.

For most international tourists, experiencing these locations in person also requires first stepping onto a fossil fuel–guzzling airplane. Clark, who acknowledges the economic value that heritage sites can provide to local communities, also advises would-be explorers: “Don’t go by air if you can possibly avoid it.” Visiting threatened sites such as Tipasa without contributing to the threats they face is almost impossible.

Despite the challenges, Aoudia Benali believes Tipasa can survive if it receives the resources it needs, including management of the encroaching urbanization and steps to mitigate erosion and flooding. Getting those resources, however, remains uncertain—in a distracted world, the recent paper caused barely a ripple.

Tipasa’s name derives from the Phoenician for “crossing point,” a reference to its earliest days along a key maritime route that linked ancient Carthage to colonies around Gibraltar. The ancient city is now at a tipping point, the devilish business of securing resources on one side, the deep blue sea on the other.

The Quest to Reacquaint Japan With Its Forgotten Native Citrus

The coastal community of Selsey welcomes the return of salt marshes where farms once stood.
science

Researchers scramble to find and study everyday items preserved for millennia and now at risk.
ruins

Up close with the 7,000-year-old Dolmen of Guadalperal.
ancient

Cahokia's decline is at least partially a story of climate change.
Video • PinDrop