The Quest to Reacquaint Japan With Its Forgotten Native Citrus - Gastro Obscura
Want to see fewer ads? Become a Member. 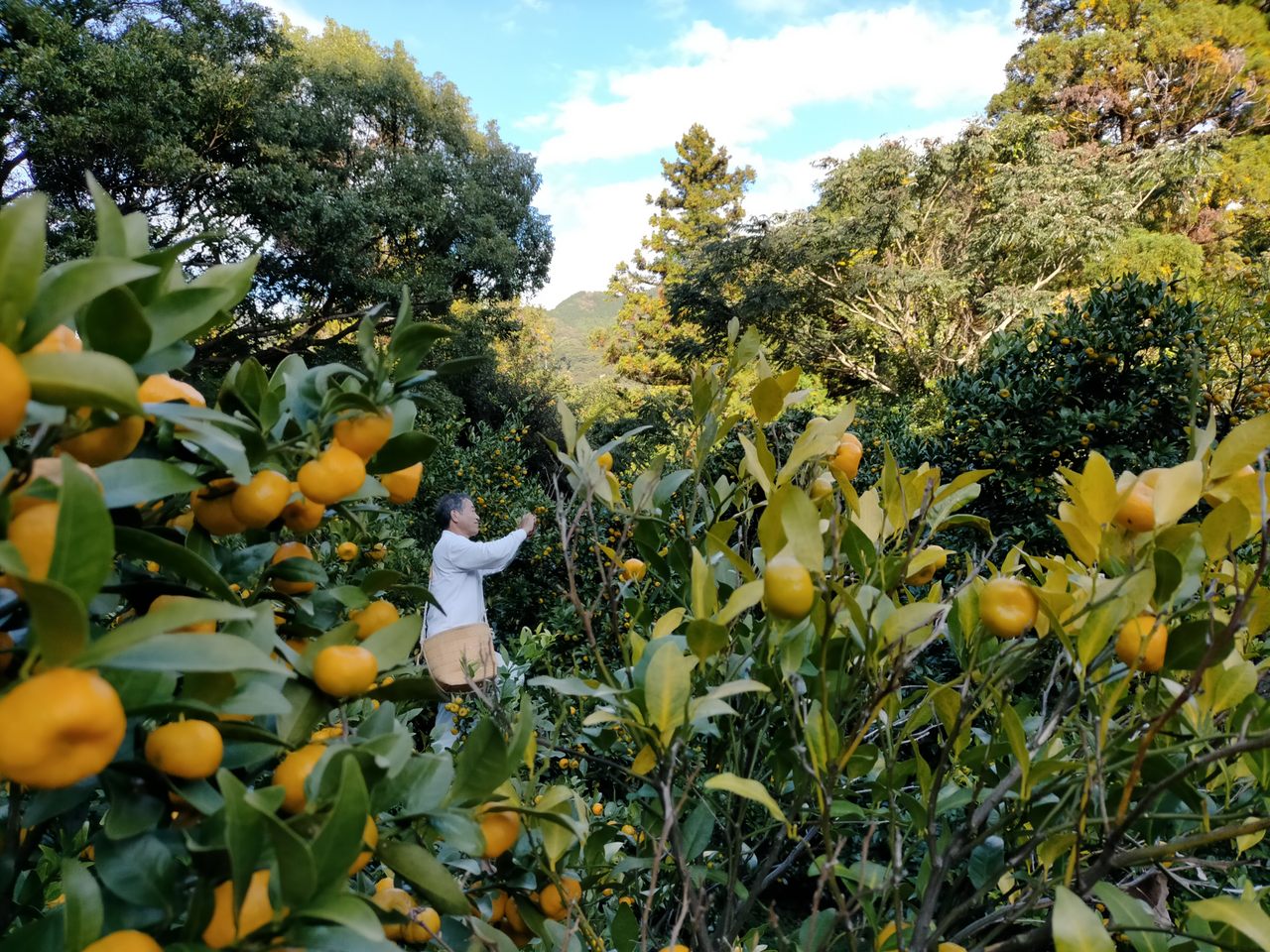 It’s early December, and somewhere on a mountain on the Japanese island of Shikoku, there’s a citrus tree laden with golden-yellow fruit, each one no larger than a kumquat. There aren’t many of them in the wild. This one might have grown from a large seed, dropped by a bird feasting on the fruit of its cousin from elsewhere. These rare trees cannot survive unless their surroundings are just right, with plenty of sun, space, well-drained soil, and warm temperatures.

Scratch the peel of one of those tiny fruits, and you’ll release a remarkably powerful fragrance, full of zesty, spicy, bitter notes, a dozen citruses distilled into a single whiff. Its flesh is an electric burst of tart and bitter flavors, far more intense than a lemon or grapefruit, followed by a barely detectable undertone of sweetness.

This delicate little citrus is the tachibana. It is one of only two citruses native to Japan—the other being the Okinawan shequasar—and is extremely rare. Officially classified as an endangered species by the Ministry of the Environment, the tachibana is in the rather peculiar position of being omnipresent yet virtually unknown.

Most people encounter it daily, engraved on the face of 500-yen coins, or in miniature as a tree on the dolls’ displays during Girls’ Festival in March. Its flowers appear on family crests, and on the prestigious Order of Cultural Merit medal, awarded to those who have made significant contributions to Japanese culture.

Nevertheless, tracking down a tachibana is like trying to score a reservation at an invitation-only restaurant. You have to know what you’re looking for, and whom to ask. Most people have never seen a tachibana in the flesh, let alone tasted one. Many Japanese citizens don’t even realize it’s a citrus, according to Akari Hiroi, a citrus expert based in Kagawa Prefecture.

“I’ve seen tachibana before, but they were always ornamental,” says Hiroi, who authored The Citrus Textbook for the Citrus Sommelier Association. “We usually encounter them in their flower form, rather than as a fruit to be eaten out of hand, so we tend to think of it as a plant.”

Kenji Jō is trying to change that. Since 2011, the former bank employee has served as the chairman of the Nara Tachibana Project. The organization’s mission is to rekindle interest and raise awareness about the citrus, preserve a forgotten piece of Japanese culture, and raise Nara’s culinary profile in the process. To help achieve that goal, Jō has spent most of his retirement planting several thousand tachibana trees and developing related citrus products such as tachibana herb tea and tachibana koshō (a riff on yuzu koshō—a seasoning that contains chili and citrus—using tachibana peel).

Jō’s work is crucial to saving this disappearing fruit tree and preserving its little-known legacy. While few people may be able to recognize the tachibana today, there was a time when the fruit and its flower both commanded reverence and respect. Both the Nihon Shoki and the Kojiki describe its legendary origins: With one foot in the grave, Emperor Suinin (r. 29 B.C.–70 A.D.) commanded a man to venture into the underworld and bring back the fruit of immortality. Although he returned too late to save the emperor, the fruit and branches he brought back were supposedly planted at Tachibana Temple. Although the story may be apocryphal, the temple still stands to the south of Nara City and features several tachibana trees on its grounds.

According to citrus researcher and scientist Sayuri Teramoto, there’s a grain of truth to that legend. Whether it was humans, migrating birds, or even ocean currents, the first citrus seeds were almost certainly carried over to Japan from the Chinese mainland thousands of years ago. Somewhere along the line, the imported interloper underwent several mutations that resulted in a citrus cultivar that was genetically isolated from other citrus populations in China. In short, one that was unique to Japan.

Most early references to the tachibana praise its tart, heady fragrance. During the Heian period (794–1185), women within the Japanese aristocracy perfumed themselves with tachibana, tucking sachets of its blossoms into their kimono sleeves or threading the fruits on cords and wearing them like bangles. The Man’yōshū, the oldest extant collection of Japanese poetry, contains 70 poems about or referencing tachibana, celebrating its beguiling perfume.

By the Edo period, the tachibana had become more accessible to classes outside the aristocracy, with many families using the fruit in household offerings to the gods. But even with its increased popularity, the tachibana still held a powerful status in royal circles: In the same era, there are references to ripe tachibana fruits being presented to the Imperial Court and the shogunate.

Despite its value, the tachibana wasn’t something people commonly ate. “I mean, you could eat it, but it wasn’t a fruit as such. You didn’t just eat it as is,” stresses Teramoto. “It was originally a symbolic fruit.”

Historical records overwhelmingly emphasize its fragrance over its flavor. Although details on the tachibana’s culinary use throughout history are sparse, there are a few examples: The Nihon Shoki, for instance, briefly notes that tachibana juice was used as a sweetener and, before satsuma mandarins and bitter oranges replaced the citrus, decorative kagami mochi (rice cakes) once came topped with tachibana to symbolize longevity at New Year’s celebrations.

And yet, while the tachibana was once the subject of poems, offerings, and reverence, few people give a second thought to the fruit that graces their money today. How did such a beloved citrus fall into near-obscurity?

Kenji Jō thinks that censorship during the postwar period is partially to blame. Following orders from the Ministry of Education in September 1945, teachers and students across Japan were obliged to erase nationalist content from wartime textbooks with ink and scissors. Because of its associations with the Imperial family (who had long cherished the tachibana as a symbol of longevity), mentions of the tachibana were likely also deleted. According to his theory, this had the effect of erasing, or at the very least vastly diminishing, the tachibana’s presence in Japan’s collective consciousness.

However, according to other citrus experts, there are simpler, more likely reasons for the tachibana’s gradual fall into obscurity. First, the trees are very challenging to cultivate. “There are still places that protect and grow them, especially shrines and temples,” says Teramoto. “But there are very precise, limited conditions under which tachibana can survive in the wild, and if these aren’t just right, they won’t survive at all.”

More importantly, the tachibana currently lacks commercial value. According to citrus farmer Noriyuki Enami, who makes marmalade using the tachibana, the bitter citrus can be a hard sell. The increasing availability of more flavorful citruses like the satsuma mandarin as well as sugar in general has also reshaped palates to prefer sweeter fruits. The average consumer is unlikely to gravitate to new, unfamiliar fruit, let alone something as bitter as the tachibana. (It certainly doesn’t help that the fruits remain ripe and edible for a week to 10 days at most before rotting; they wouldn’t last the journey to most supermarkets.)

The tachibana’s symbolic weight in Japanese culture also means that not everyone thinks the drive to bring the fruit to more consumers is uniformly positive.

“I feel a little disloyal to Jō for saying this, but if many people started growing tachibana and it became popular, it would lose some of its value,” muses Hiroshi Kawashima, head chef of akordu, a modern Spanish restaurant in Nara. Kawashima features fruits sourced from the Nara Tachibana Project on akordu’s menu. “Not everyone will care about its history as a sacred fruit the way he does, and if it does become popular, it’ll become just another consumer product.”

Although the citrus still isn’t widely cultivated on a commercial scale, there has been a quiet-but-growing increase in culinary interest in the tachibana, thanks to the efforts of grassroots organizations in small towns across Japan, such as the Nara Tachibana Project as well as Heda Tachibana no Kai, which has carried out tachibana conservation and promotion efforts in Numazu City for the last two decades.

Short of finding actual tachibana in the wild, consumers can try the rare citrus through dishes like the ones served at akordu. Kawashima’s menu includes a refreshing, gently medicinal tachibana herbal tea as an aperitif as well as tempura he makes with leaves from the plant’s first flush.

Beyond the restaurant, a variety of tachibana-flavored products have started popping up across Japan. Nara kakigōri specialist Housekibaco transforms tachibana into vibrant syrups for shaved ice, while Yamato Distillery’s Kikka Gin uses the fruit’s peels. And farther south, in Fukuoka, wagashi purveyor Fujimaru uses egg whites, sugar, and juice from the tachibana that grows at Dazaifu Tenmangu Shrine to make a dry, wafer-like sweet to be enjoyed with tea.

In 2020, Noriyuki Enami took home the Double Gold Award at the World’s Original Marmalade Awards with his tachibana marmalade, made from wild tachibana trees managed by the Toda Forestry Association in Numazu City. “It’s pretty popular in the U.K.,” he says with pride.

While the tachibana’s extreme bitterness means that it’s unlikely to ever achieve mainstream popularity, any recipe that promotes the little citrus is a step toward lifting it out of its endangered status.

“I’d like for this level of interest to continue,” says Enami. “I’d really like for more people around the world to know about tachibana.”

A medley of efforts, and one abbey's monks, may bring back the forgotten fruit.
food

Medlars' shapes once inspired a lot of jokes.
food

When you can't throw a vegetable at a rotten official, call them one.
Video