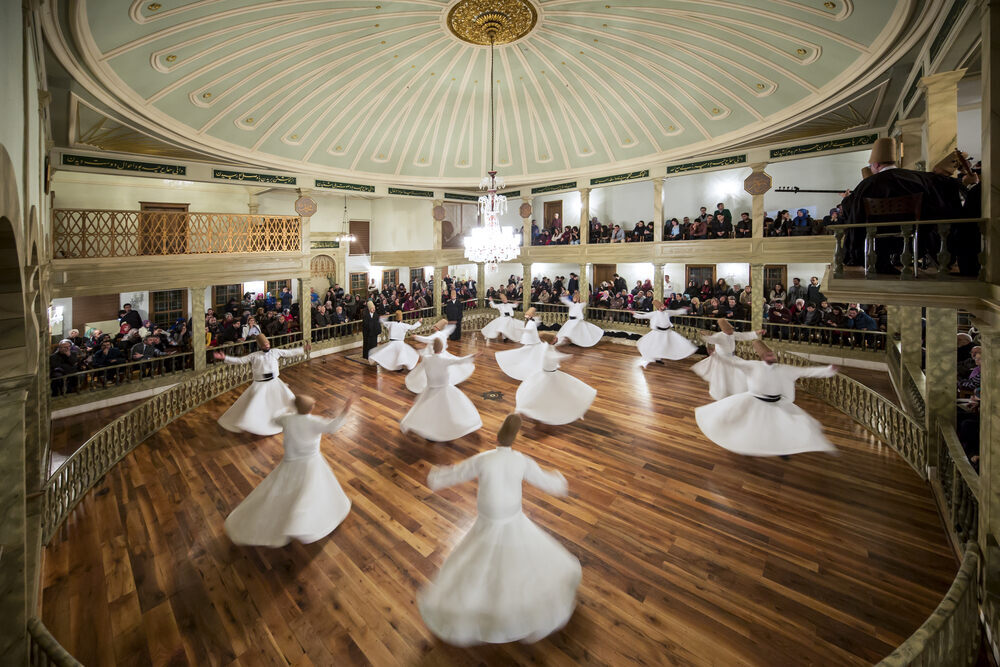 In This Story
Destination Guide

The whirling of the Mevlevi dervishes is one of Turkey’s most iconic images, popularized in films and tourist ads for decades. Naturally, these ads do not mention that it has been illegal to perform this ritual for almost 100 years. In fact the Mevlevis are just one of a dozen Islamic orders—called tarikat in Turkish—whose activities are still banned in Turkey.

Luckily for tourists and Turks, selective application of the law means that we can still watch the Mevlevis’ whirling ceremony inside state-owned museums. But for every lodge that has been turned into a cultural center or museum, there are hundreds that lurk neglected and crumbling in the backstreets.

According to historian Faruk Göncüoğlu, the number of Istanbul’s lodges reached around 700 in the Ottoman era. Each of the orders that lived in these buildings had different rituals and professions: the Mevlevis were musicians and artists, the Bektaşis were soldiers, and the Nakşibendi were scientists, for example. Aside from the whirling dervishes, European travellers in the 19th century were spectators to the Rifaiyye “howling dervishes”, who practiced flagellation and piercing with needles.

But Mustafa Kemal Atatürk’s vision of a republic based on European positivism had no place for mystical orders. The outbreak of a southeastern rebellion led by Nakşibendi leader Sheikh Said gave the government a reason to act, and in 1925 all Sufi lodges and Ottoman tombs were closed by law. It also became illegal to use the titles of “sheikh”, “dervish”, “emir”, and “caliph”, to wear clothing associated with those titles, and more bizarrely to call oneself a coffee reader, sorcerer, or exorcist. The first cracks in this extreme secularism came with the defeat of Atatürk’s party in the 1950 elections, and the Ottoman tombs were reopened to the public that year—with no change to the ban on Islamic lodges.

Istanbul’s first lodge was founded next to Rumeli Hisarı, the fortress that Sultan Mehmed I built in preparation for the conquest of 1453. Now on the grounds of Boğaziçi University, the lodge was rebuilt as a historical research center in 2015.

The Galata Mevlevihanesi, a two-minute walk from the Galata Tower, dates to 1481 and reopened as a museum in 2011. While the building is beautifully restored, the waxworks of cross-legged Sufis have all the mystical power of a natural history museum. Visitors are invited to watch the whirling ceremony every Sunday—as has been the case since the 19th century, with travelers such as Gustave Flaubert and Hans Christian Andersen writing their accounts of the dervishes.

Across the Bosphorus in Üsküdar, the 18th-century Uzbekistan Lodge has met a worse fate. Bukharan pilgrims built the lodge as a stop on the way to Mecca, but after the Ottoman defeat in World War I it began ferrying Turkish nationalists in the opposite direction. Future president İsmet İnönü was one of those who escaped the Allied occupation of Istanbul through the Uzbeks. Atlantic Records co-founder Ahmet Ertegün was descended from one of the lodge’s sheiks, and he restored it in 1996 with the aim of opening a museum. Ten years later he signed the lodge over to the government, and it has since been occupied by a foundation for Islamic research.

In recent years a number of high-profile writers have revived interest in the Sufi orders. Despite having no strong beliefs himself, Orhan Pamuk used Sufi elements in his novels The Black Book (1990) and Snow (2002). Popular writer Elif Şafak retold Mevlana’s relationship with Shams of Tabriz in her novel The Forty Rules of Love (2010), and she has talked widely about her respect for Sufism. However, neither Pamuk nor Şafak have declared themselves as active members of a Sufi order.

One symbol of continuity is the family of Mevlana Celalledin-i Rumi, whose 22nd generation descendant still lives in Turkey as president of the International Mevlana Foundation. President Faruk Hemdem Çelebi represents an unbroken line of over 800 years from Rumi’s birth to the present day.

Public interest peaked recently with news of celebrities joining one of Istanbul’s Cerrahi lodges. The Nureddin Cerrahi lodge, close to the Byzantine walls of the old city, contains the tomb where the order’s founder is buried, as well as a hall for zikir—remembrance of the names of God through music and dance. Cerrahi members dress in white robes and skullcaps with black jackets, rocking and turning to hymns accompanied by the ney (reed flute), tambur (long-necked lute), and def (frame drum). Similar to the nigns of Hasidic Jews, the rising tempo carries the Cerrahis into an ecstatic union with the divine.

Also active in Istanbul is the Bektaşi order, which is considered a branch of Alevi Islam. Şahkulu Sultan Alevi-Bektaşi lodge is possibly the oldest Turkish structure on the Asian side of Istanbul, built in 1329 by followers of Anatolian mystic Hacı Bektâş-ı Velî. The Bektaşis perform their zikir mostly in Turkish, with few Arabic words—a consequence of the strong Central Asian influence on Aleviism. Unlike most Sunni groups, it is important for Alevis that men and women perform these rituals together.

Since 2010, politicians from both the ruling party and the opposition have proposed removing the 1925 law that closed the lodges. But others are uneasy about approving these heterodox and eccentric orders. Until a spirit of acceptance prevails, they will continue to pass on their secrets in the twilight between past and present.

The Woman Who Survived the Lowest Body Temperature Ever

A tradition of anonymous charity lives on in the age of COVID-19.
architecture

One researcher is recommending a zero-tolerance policy.
Video • AO Docs