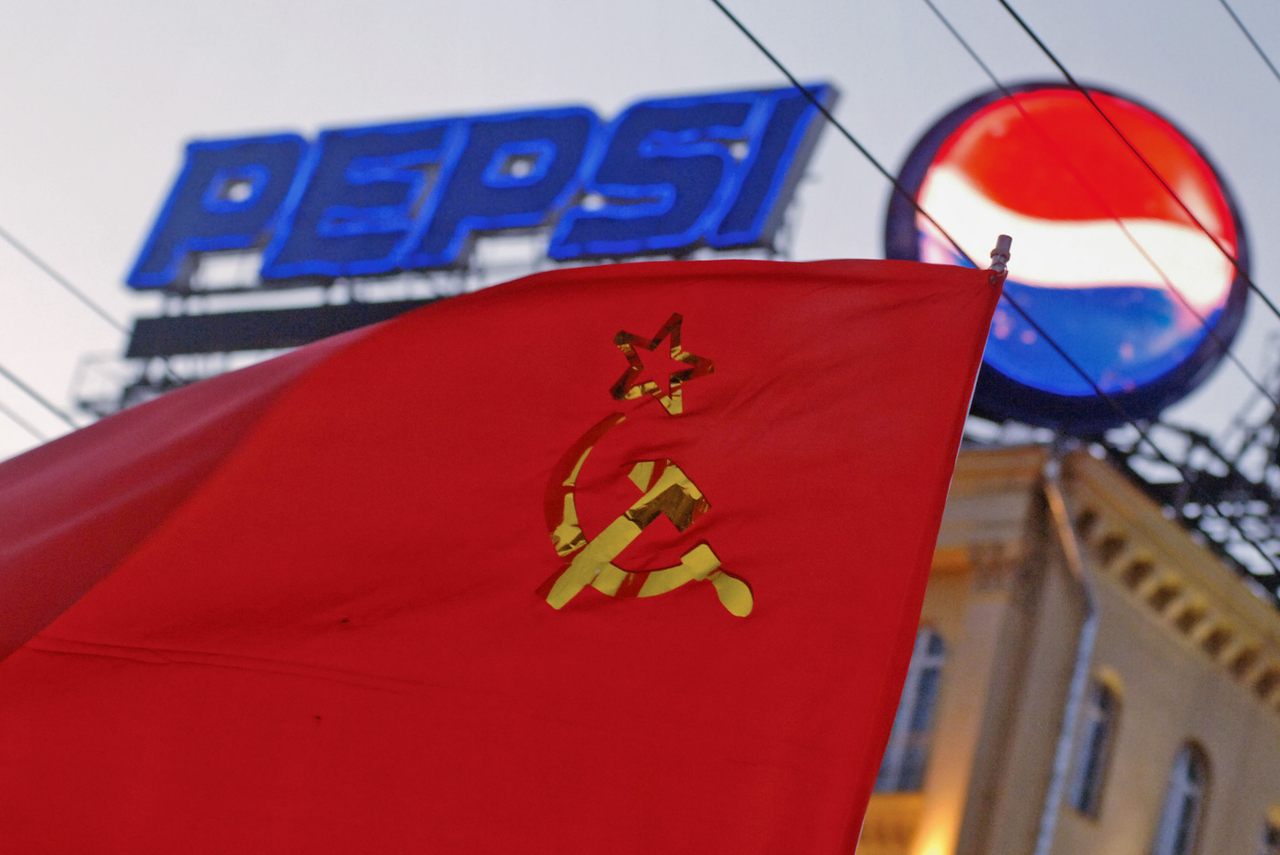 On April 9, 1990, American newspapers reported on an unusual deal. Pepsi had come to a three billion dollar agreement with the Soviet Union. The Soviet Union had long traded Stolichnaya vodka in return for Pepsi concentrate. But this time, Pepsi got 10 Soviet ships.

This wasn’t the first time that Pepsi sold soft drinks in return for a flotilla. The previous year, the company even received warships. This situation—a soft drink conglomerate briefly owning a fairly large navy—was the unusual result of an unusual situation: a communist government buying a product of capitalism from the country it considered its greatest rival.

It began with a rare exchange of culture. In the summer of 1959, the U.S.S.R. held an exhibition in New York, and the United States reciprocated. The American National Exhibition in Sokolniki Park, Moscow, featured American products: cars, art, fashion, and an entire model American house. A number of still-familiar brands sponsored exhibits and booths, including Disney, Dixie Cup Inc, IBM, and Pepsi.

That month, many Russians got their first taste of Pepsi. One of them was Soviet leader Nikita Khrushchev. On July 24, then-Vice President Richard Nixon showed Khrushchev the exhibition. It became the scene of the infamous Kitchen Debate. While standing in a mock-up of an American kitchen, Nixon and Khrushchev traded barbs about communism and a recent American resolution on “captive states” under Soviet power. Nixon also led Khrushchev towards a display booth that dispensed nothing other than Pepsi-Cola. Symbolically, the booth offered two batches: one mixed with American water, the other with Russian.

It was a set up. The night before, a Pepsi executive, Donald M. Kendall, had approached Nixon at the American embassy. As the head of Pepsi’s international division, he’d defied the company’s leaders in deciding to sponsor a booth and attend the exhibition. To prove that the trip was worthwhile, he told Nixon, he “had to get a Pepsi in Khrushchev’s hand.”

Nixon delivered. A photographer caught Nixon and Khrushchev together as the Soviet leader gingerly sipped his cup of Pepsi. Kendall stands to the side, pouring another cup. Khrushchev’s son later recalled that many Russian’s first take on Pepsi was that it smelled like shoe wax. But, he added, everyone remembered it, even after the exhibition was over.

For Kendall, the photo was a triumph. He had big plans for the brand’s expansion, and the Khrushchev photo op catapulted him up the ranks at Pepsi. Six years after the American National Exhibition, Kendall became CEO.

The U.S.S.R. was Kendall’s land of opportunity, and his goal was to open it to Pepsi. In 1972, he succeeded, negotiating a cola monopoly and locking out Coca-Cola until 1985. Cola syrup began flowing through the Soviet Union, where it was bottled locally. It was a coup: As the New York Times put it, the soda was “the first capitalistic product” available in the U.S.S.R. Pepsi had become a pioneer. But there was one issue: money.

Soviet rubles were worthless internationally, with their value determined by the Kremlin. Soviet law also prohibited taking the currency abroad. So the U.S.S.R. and Pepsi resorted to barter. In return for cola, Pepsi received Stolichnaya vodka to distribute in the United States. By the late 1980s, Russians were drinking approximately a billion servings of Pepsi a year. In 1988, Pepsi broadcast the first paid commercials on local TV, starring none other than Michael Jackson. The bartering worked well—Stolichnaya was popular in the United States. An American boycott in response to the Soviet-Afghan war, however, meant that Pepsi wanted something else to trade.

So, in the spring of 1989, Pepsi and the Soviet Union signed a remarkable deal. Pepsi became the middleman for 17 old submarines and three warships, including a frigate, a cruiser, and a destroyer, which the company sold for scrap. Pepsi also bought new Soviet oil tankers and leased them out or sold them in partnership with a Norwegian company. In return, the company could more than double the number of Pepsi plants in the Soviet Union. (It also ignited jokes that Pepsi was taking the Cola Wars to the high seas.) “We’re disarming the Soviet Union faster than you are,” Kendall quipped to Brent Scowcroft, President George H.W. Bush’s national security adviser.

But that was nothing compared to 1990’s three billion dollar deal. (A figure based on Pepsi’s estimate of how much sales of cola in the Soviet Union and vodka in America would net them over the next decade.) It was the largest deal ever brokered between an American company and the Soviet Union, and Pepsi hoped it would spur more expansion. Pepsi even launched another American institution in the country: Pizza Hut. The future looked bright.

Instead, the Soviet Union fell in 1991, taking with it Pepsi’s deal of the century. Suddenly, their long balancing act turned into a scramble to protect its assets in a free-for-all made more complex by redrawn borders, inflation, and privatization. The LA Times described how the new Pizza Huts were hobbled—their mozzarella was sourced from Lithuania. The company had hoped to pivot from heavy glass bottles to cheaper plastic, but the plastic company was located in Belarus.

Similarly, Pepsi’s partially-built ships were stranded in newly-independent Ukraine, which wanted a cut of the sales. Kendall, who had since retired, lamented that the Soviet Union had essentially gone out of business. Over several months, Pepsi pieced parts of the deal back together. But instead of dealing with a single state, they had to broker with 15 countries. Worse, Coca-Cola aggressively entered the former Soviet Union, and Pepsi struggled to keep its advantage. Among other marketing strategies, it launched a giant, replica Pepsi can up to the Mir space station for a commercial, and erected two iconic billboards over bustling Pushkin Square in Moscow.

Russia is still Pepsi’s second biggest market outside of the United States. But their pioneering luster has faded. It didn’t help that Pepsi had been around for so long that other sodas seemed novel by comparison. After only a few years, Coke beat out Pepsi as Russia’s most popular cola. And in 2013, even the billboards over Pushkin Square came down. Maybe Pepsi should have held on to that destroyer.

The Fashion and Mystery of Ancient Roman Puzzle Locks

The Iron Curtain went to infinity and beyond.
cold war

How a standoff with Castro knocked a hole in the shrimping village of Thunderbolt.
politics

How Survivors of Stalinism Created a New Korean-Fusion Cuisine

When the Koryo Saram were forcibly relocated, they forged new identities.
Video