Can Solar Cookers Save the World? - Gastro Obscura
Want to see fewer ads? Become a Member. 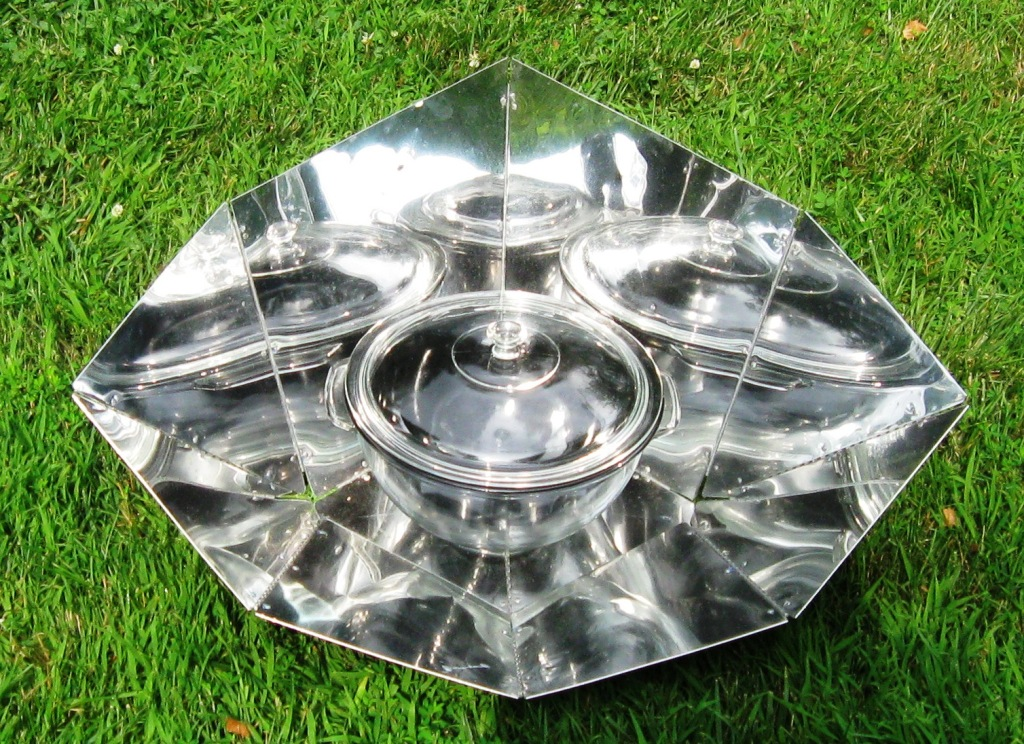 Sunshine and some reflective material can cook your dinner. Public Domain/CC0 1.0
In This Story
Place

At this desert restaurant, meals are cooked in solar ovens.
Place

In Phetchaburi, Thailand, a roadside vendor cooks his fare with 1,000 mirrors and the power of the sun.

THIS ARTICLE IS ADAPTED FROM THE MAY 28, 2022, EDITION OF GASTRO OBSCURA’S FAVORITE THINGS NEWSLETTER. YOU CAN SIGN UP HERE.

Last week, I gave myself both a sunburn and a crash course in solar cooking.

This culinary vacation from my kitchen started when I unearthed a strange cardboard contraption in the attic. It looked like a flattened box, but unfolding it revealed printed instructions on one side and a gleaming, chrome-painted lining on the other.

The device was a solar oven. Specifically, a CooKit, a cardboard oven created by Solar Cookers International, a non-profit based in Sacramento, California. Solar ovens are more than science fair experiments. For decades, SCI has used them to fight all manner of social, economic, and environmental ills, from the respiratory illnesses caused by smokey cookfires to the high price of fuel.

The CooKit solved one issue for me this week: how to cook during a heatwave without heating up the house. The last few days, I’ve roasted vegetables and baked cakes in my backyard. Sure, each dish took twice as long as usual, but they required no more attention than adjusting the oven every so often to follow the sun.

Solar cooking has been around for hundreds of years, but the case for it (no fuel, zero pollutants, no need to use an indoor stove during ever-hotter summers) is stronger than ever. Could this be the dawn of a new era of cooking?

In Enlightenment-era Switzerland, a Renaissance man by the name of Horace-Bénédict de Saussure had a space-age idea. In 1767, the famed mountaineer-physicist-meteorologist layered together sheets of glass to create the first solar oven, even hauling the contraption up and down the Alps to test it at different altitudes and temperatures.

The following centuries saw a slew of inventors follow in his footsteps. They used glass, reflectors, and curved mirrors to direct light to a focal point, such as a pot. The pot absorbs heat, which is trapped by a glass or plastic cover.

Though solar-oven cooking takes longer than the average stove, the heat is so low and even that there’s no need to stir or even monitor the food. Burning food in a solar oven is almost impossible.

Even in the early days of solar power, people recognized its potential. Mountaineers and militaries have constantly experimented with solar cooking over the years, since there’s no need to haul heavy fuel with a solar oven on hand.

Many restaurateurs have also used it as a compelling draw. During the Qing dynasty, a Chinese mathematician used mirrors and reflectors to start a sun-roasted duck business. Today, restaurants in Armenia, Chile, and Thailand all cook with sun power.

Solar Cookers For All

Cooking with the sun has many champions. Smoky fires and high fuel prices are causing environmental, health, and economic damage to families across the world.

I chatted with Caitlyn Hughes, the executive director of Solar Cookers International, about her organization and the potential of solar cookers. This interview has been edited and condensed for clarity.

How would you describe your mission?

There’s about 2.6 billion people worldwide who are cooking over open fires, which is incredibly harmful to people’s individual and family health, as well as our planet.

People who are cooking this way don’t have other choices. They have to cut down trees, which also contributes to climate change and deforestation. And so when we are able to offer the solution of solar-thermal cooking, people can cook with no emissions and no pollutants.

Solar Cookers International has consultative status with the United Nations. I remember meeting the Minister of Energy from Uganda at one of these UN climate conferences, and he was just like, “This is the solution that people need. I cannot wait to take this back and show more people in my country.”

And you also make and distribute solar ovens, right? I own a CooKit.

The CooKit is still a fabulous design. Solar Cookers International actually designed the CookIt by request of the United Nations Refugee Agency because they wanted something that could be made easily and affordably anywhere around the world.

Is there a part of the world that SCI particularly focuses on?

Ideally, worldwide! Everywhere the sun shines. We’ve been working in Kenya for quite a few years now as there’s a really good fit in terms of the need and opportunity for impact as well as the climate.

We’re doing work in the Kakuma refugee camp. The refugees don’t have enough fuel to cook the food rations they’re given. So they often have to trade some of their food rations for cooking fuel.

India also has a really strong presence in terms of solar cooking. We’ve got three global advisors there doing amazing work in institutional-scale solar cooking. So, for example, rooftop steam systems that can cook for thousands of people at a time.

Do the staff at SCI actually use solar cookers?

We all love to solar cook! It was over 100 degrees in Sacramento [yesterday]. The last thing we want to do here is turn on our oven.

I love to cook lasagna, enchiladas, quiche, brownies, cookies … Corn on the cob is actually the easiest. You just put corn on the cob—still with the husks on—into the solar cooker and check on it in maybe an hour, an hour and a half, and you get really sweet, juicy corn. Cooked by the sun.

How to Cook With the Sun

Want to start solar cooking but don’t have the foggiest idea where to start? Here are some tips!

The "Sunny Meals" are made with sunshine.
prisons

In the 1970s and 80s, when the guards stepped away, the pots and flames came out.
food

A gift guide from the Atlas Obscura team.
restaurants