How Do You Do Color Commentary for an Eclipse? - Atlas Obscura
Want to see fewer ads? Become a Member. 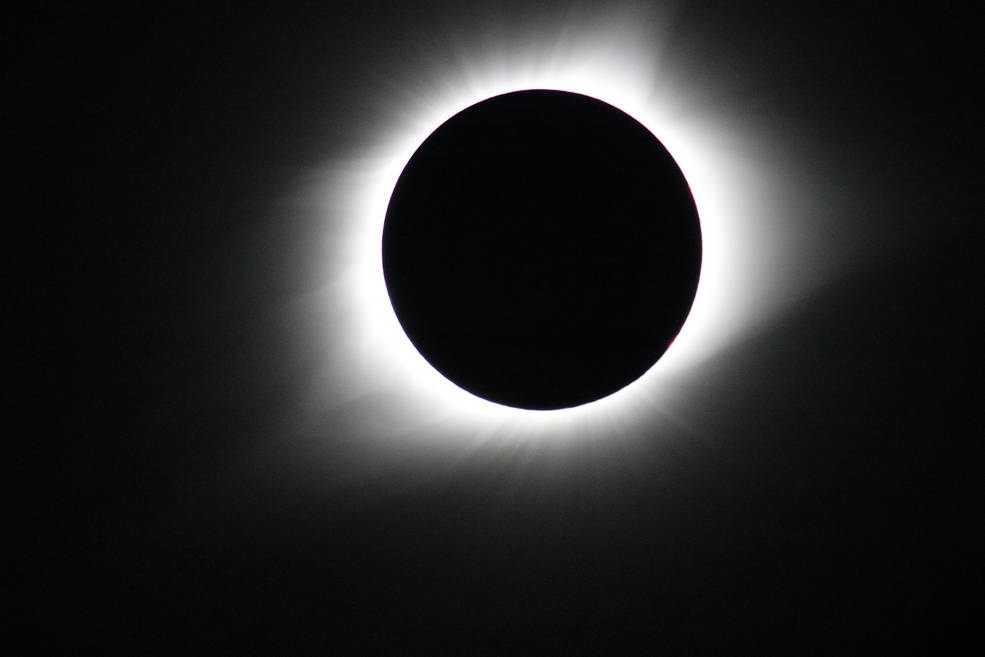 The corona is most visible during a total solar eclipse, like this one, captured on August 21, 2017. NASA/Gopalswamy
In This Story
Destination Guide

The on-air commentators for the NBA Finals in June had plenty of high-stakes gristle to chew on. The Raptors and Warriors each have legions of passionate fans with a seemingly insatiable appetite for analysis, and commentators fed them everything they could: injuries, stats, free agency, Drake’s sideline antics. Unlike Game 6, the total solar eclipse on Tuesday, July 2, isn’t a competition—but experts from NASA and the Exploratorium, a museum in San Francisco, will be delivering online commentary to viewers tuning in around the world.

For eclipse fans, there are a few excellent viewing options. The first is aboard the Parker Solar Probe, a car-sized spacecraft that NASA launched in 2018 to take a closer look at the Sun’s atmosphere. The second is here on Earth, from tall, cold, remote mountain observatories along the path of totality—the band where the Moon will fully blot out the Sun. This narrow swath between La Serena, Chile, and Buenos Aires, Argentina, will be plunged into daytime darkness for a few minutes between 4:38 p.m. and 4:44 p.m. Eastern Daylight Time. (The band of totality will make landfall in Chile and then continue over the Andes, but a partial eclipse will be visible across the rest Chile and Argentina as well as Ecuador, Peru, Bolivia, Paraguay, Uruguay, plus portions of Colombia, Brazil, Venezuela, and Panama.)

It’s impossible to actually hitch a ride on the Parker Solar Probe, but even if you could, you wouldn’t want to—the craft whips around at speeds of up to 430,000 miles per hour, and at its closest approach, roughly 3.8 million miles from the surface of the Sun, a 4.5-inch-thick carbon-composite shield is the only thing insulating it against temperatures of 2,500 degrees Fahrenheit. (It’s currently zipping along at 84,585,600 miles from the scorching surface.) And those lonely peaks in Vicuña, Chile—thousands of feet up—are more accessible, at least if you’re already there. They offer ideal conditions to study black holes and far-away galaxies, and “it turns out that the same weather and being up high away from the atmospheric stuff is good for [looking at] the Sun, as well,” says Rob Semper, of the Exploratorium. Up there, at the Cerro Tololo Inter-American Observatory, Semper and his team have set up four telescopes with various filters to help them peer at the solar show—and beam it to onlookers around the world.

From 3 p.m. to 6 p.m. Eastern Daylight Time, the Exploratorium and NASA will broadcast live feeds from these telescopes with commentary in English and Spanish from 4 p.m. to 5 p.m., courtesy of the Exploratorium’s Sam Sharkland, astrophysicist Hakeem Oluseyi, and many more. (Watch it here.) The program will include science demonstrations and updates from the Parker Solar Probe, which is seizing the opportunity to peek at the corona, the outermost portion of the Sun’s atmosphere. A solar eclipse is the best time to study it, because it’s usually outshined by the bright surface of the Sun, which is 10 million times denser. The probe will gather more information about the structure of the corona to investigate what drives the outflow of solar wind, and determine why the corona is hotter than the Sun’s surface—which remains a bit of mystery, because “when you walk away from a heat source, it usually gets colder, not hotter,” explains Karen Fox, NASA’s heliophysics communications lead. (Separately, the Virtual Telescope Project will be running a feed of its own, too.)

Since totality only lasts a precious few minutes, the NASA/Exploratorium team will prime viewers by explaining what they expect to see—including streamers and other things erupting from the surface—so that onlookers can enjoy the show once it begins. “The idea was, if you can’t travel to an eclipse, you can have some of the experience of really seeing totality,” Semper says. “You have to maximize those two minutes, [because] totality is completely different than partial. It’s an emotional experience, actually.” It can be profoundly visceral: “When I look up,” Semper says, “it looks like someone punched a black hole into the sky where the Sun used to be.” No matter where you are in the world, the online show means you can settle into a courtside seat to the solar action.

A new exhibit in London has 300 years of celestial ephemera on display.
astronomy

Found: The First Film of a Total Solar Eclipse

What We Know About How Animals Reacted to the 2017 Eclipse

Who Keeps Track of All the Craters on the Moon?

For generations, women have been critical to bringing order to the chaos of the solar system.
List