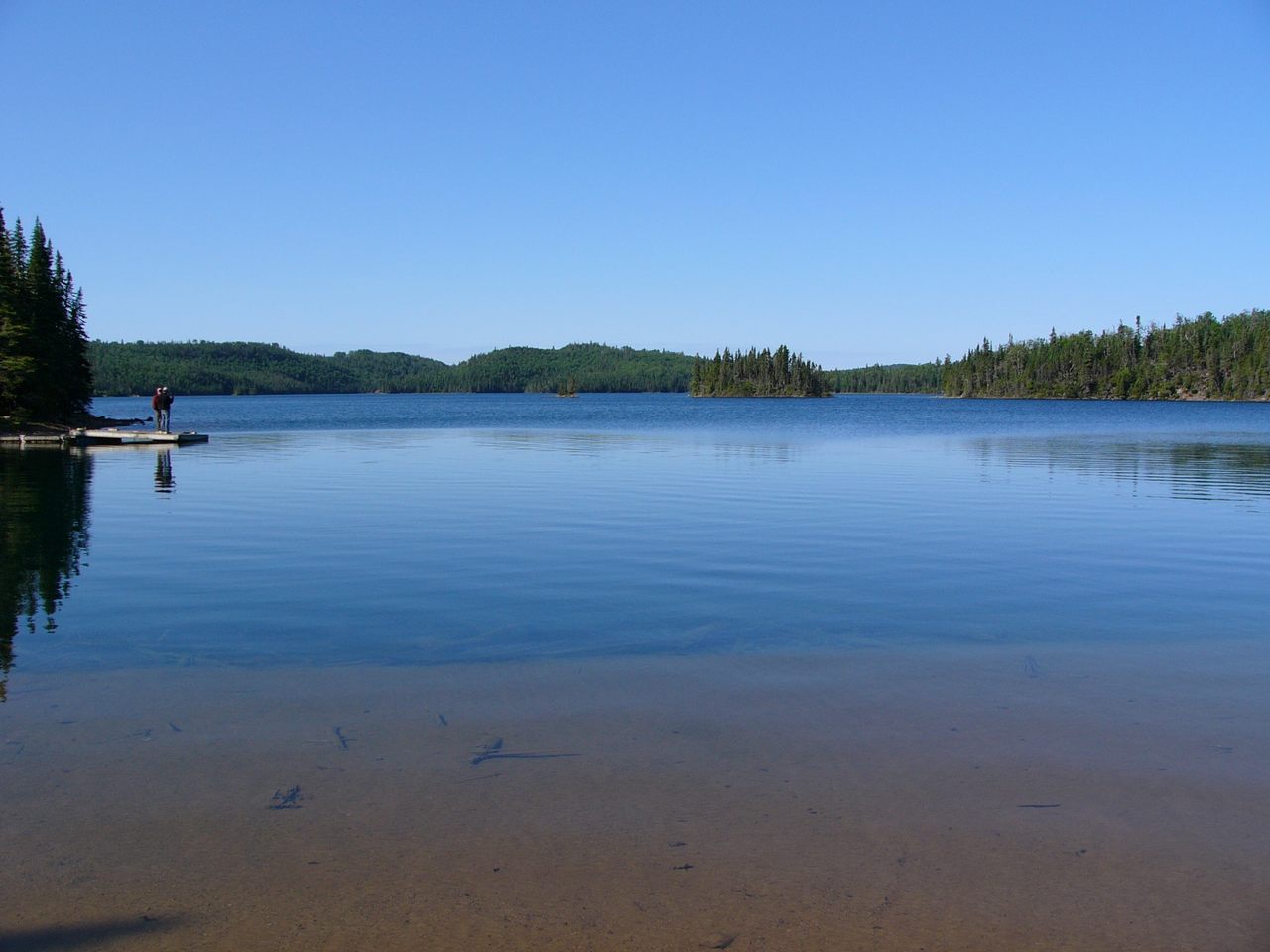 The calm waters of McGreevy Harbor, in the Slate Islands, belie a violent meteorite strike 450 million years ago that led to the archipelago's formation. Zatoichi26, CC BY-SA 3.0/Wikimedia
In This Story
Place

This small archipelago in northern Lake Superior was formed by a massive meteorite impact 450 million years ago.
Destination Guide

The Slate Islands archipelago, a small cluster of conifer-studded, rocky islands, sits in northern Lake Superior, about 8 miles from Terrace Bay, Ontario. The islands, a provincial park, feature sheltered inlets and stunning night skies, free from light pollution, which draw hikers and kayakers. The archipelago also attracts scientists: Lake Superior is the coldest and deepest inland sea in the Western Hemisphere, and the Slate Islands’ peculiar microclimate supports plants and animals—including caribou—typically seen in the Arctic.

The islands’ geology is even more significant: The archipelago marks the center of an ancient crater, the remnant of a violent event 450 million years ago. And on the shore of Patterson Island, the largest in the archipelago, a 30-foot cone of rock sits with its foot at the shoreline and its tip pointed toward the sky. It’s a shatter cone, a formation characteristic of meteorite impacts, and it’s the largest one ever discovered. Then again, maybe it isn’t.

“Whether that is a giant shatter cone or not changes on every visit, pretty much,” says Pete Hollings, a geologist at Thunder Bay’s Lakehead University. Together with Mark Smyk, his colleague at the Institute on Lake Superior Geology, Hollings has led numerous field trips to the Slate Islands over the years—but both scientists admit they’re still not sure what the towering rock formation on Patterson Island is.

The first geologic maps of the Slate Islands were published in 1901. At the time, scientists knew that some type of violent event had happened there: Some incredible force had warped and melted the rocks. They called this force a cryptoexplosion, an unexplained explosion from deep within Earth’s crust, probably due to volcanic activity.

It wasn’t until the middle of the 20th century that geophysicists determined similar structures around the world, such as the Sudbury Basin in Ontario and Arizona’s Meteor Crater, were actually the result of meteorite impacts. Not everyone agreed, and for decades, a volcanoes vs. meteors debate simmered among geoscientists.

Shatter cones, present at many of these sites, emerged as key pieces of evidence to support the impact hypothesis. The surface of these conical rock formations has a horsetail-like pattern of thin grooves; the lines radiate from the apex of the cone, which points toward the center of the impact. Quartz crystals found near shatter cones often have a particular kind of microscopic crack called planar deformation. The shockwave pressure required to create these features is intense enough to make artificial diamonds.

Shock waves from an impact also change the magnetization of surrounding rocks in unique ways, so scientists looking for evidence of a meteor strike often hauled equipment that could find those signatures into the field. Sue VanHulle, part of a geomagnetic research team investigating the Slate Islands in 1980, recalls pulling a magnetometer behind a boat in a grid pattern around the archipelago’s waters. “We were like, is this or is this not a meteor site,” VanHulle says.

In fact, the jury was out on the Slate Islands’ origins longer than for many other sites. As late as 1999, noted Canadian geologist R. P. Sage argued in favor of a cryptoexplosion, citing inconsistencies he found in the impact crater hypothesis. According to Sage, multiple shatter cones at the site weren’t pointing toward the crater’s center as would be expected, there was no evidence of the crater on Lake Superior’s nearby north shore, and other, non-impact events could explain the melted and fractured rocks present around the archipelago.

Eventually, however, faced with what Hollings calls “pretty compelling” evidence—including geomagnetic readings, microscopic rock fractures, and the sheer number of shatter cones around the islands—even Sage came to embrace an impact origin for the archipelago.

“Experimental work shows that you really couldn’t create some of these structures, like shatter cones, without these hypervelocity impacts,” says Smyk. “So the debate was pretty much put to bed.”

Geologists now agree that 450 million years ago, a roughly mile-wide meteorite slammed into what is now Lake Superior. Just like a stone’s impact on the surface of a lake sends up a tiny plume of water, the meteorite strike created an uplift of rock—the Slate Islands—in the center of an impact crater. The crater itself is estimated to be about 19 miles across, though most of its features have been worn away by waves of glaciation and other erosive events.

One remnant of the impact that has endured is that 30-foot-tall rock formation on Patterson Island, which would be a record-breaking shatter cone—if that’s what it is. Shatter cones usually aren’t more than a couple feet tall. “You get [shatter cones] in clusters or groups, so they’re pretty obvious when you do see them,” says Smyk. “This one’s a little bit different in that it’s a one-off and it’s so large. It’s a different beast altogether.”

“There’s been a lot of discussion about whether it represents a single shatter cone, or perhaps it’s just a trick of the light, or it’s multiple shatter cones,” Hollings adds.

In fact, the Patterson Island formation is ambiguous enough to lend itself to multiple interpretations. For example, the lines on this particular outcropping aren’t the definitive thin, horsetail-pattern grooves of a shatter cone, and could just be cracks; powerful space rock impacts can fold, melt, and fracture the rock until it’s nearly unrecognizable. While geologists continue to be intrigued—and perplexed—by the massive rock cone on Patterson Island, there’s no question that it sits at ground zero for a notable event in our planet’s history.

“When you talk about processes in geology, you’re talking on the order of thousands, millions, billions of years…whereas [a meteorite impact] is essentially instantaneous,” says Smyk. “Part of the fascination is how all this can happen so quickly, and on such a large scale.”

For frequent visitors such as Smyk, the archipelago’s origins are just one part of its appeal. “It’s just like a little world away in the middle of Lake Superior,” he says. “The rocks and the geology notwithstanding, it’s still a beautiful, beautiful spot.”

When Is a Crater Not a Crater?

Our planet is pockmarked with the scars of these extraterrestrial visitors. Morgan Freeman would be terrified.
science

Well, yes. And no. Actually, it depends on where you stand, in more ways than one.
maps

The recent discovery of the world's northernmost "island" recalls the groundbreaking work of the international Polarfahrt team more than 90 years ago.
Video • Object of Intrigue