The Rougarou, Beast of the Louisiana Bayou, Gets a Makeover - Atlas Obscura
Want to see fewer ads? Become a Member. 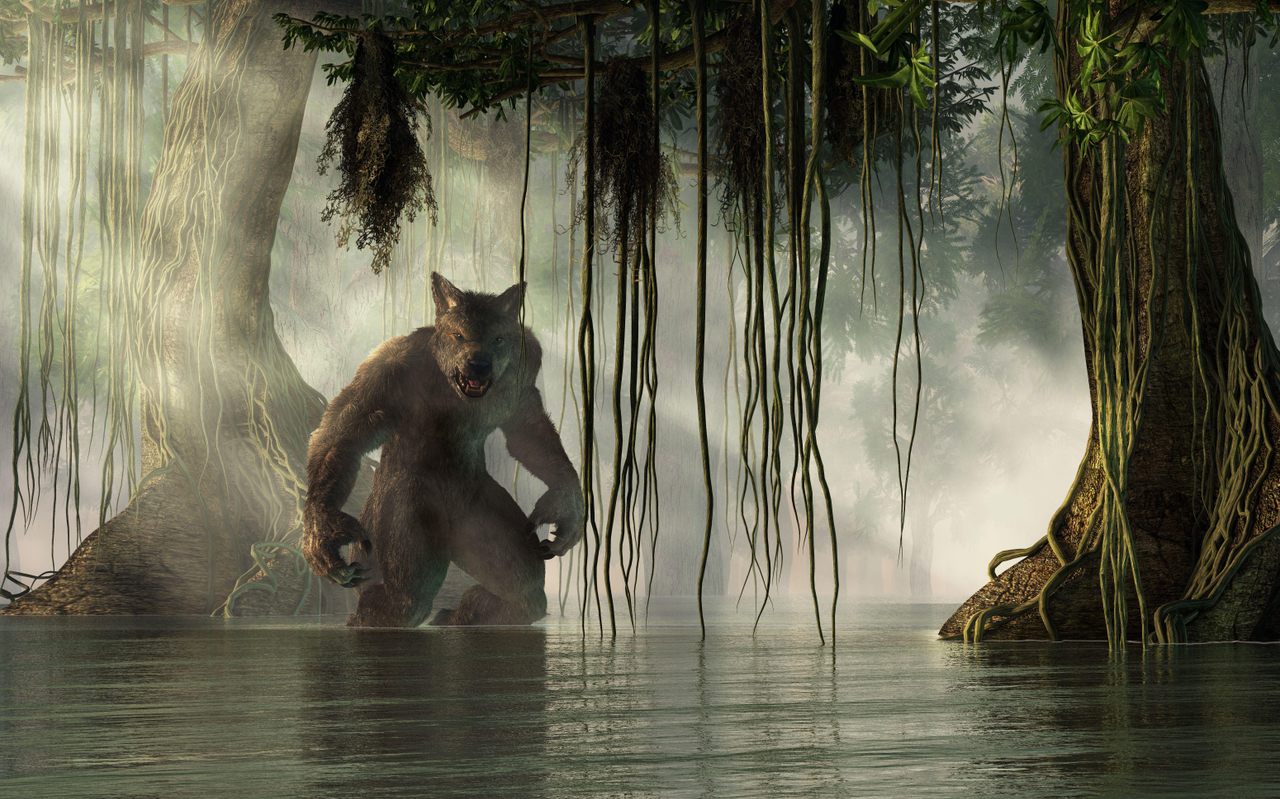 The rougarou, the Cajun cryptid said to haunt Louisiana's wetlands, is the mascot of a conservation effort for its traditional habitat. Daniel Eskridge/Alamy Stock Photo

Lurking in the woods and wetlands of southern Louisiana, according to Cajun legend, there’s a ferocious monster that attacks the wayward and the wanderer. “Our parents would say things like, ‘you better behave or the rougarou is gonna get you,’” says Jonathan Foret, a native of Terrebonne Parish, a patchwork of bayou and lowlands on the Gulf shore.

The cryptid, usually described as a towering, hairy monster, is allegedly a human cursed to take beastly form. For centuries, if you didn’t follow Catholic traditions, such as observing Lent, or if you hunted on holy days, the rougarou would get you. Even the act of self-defense could be life-altering. Foret recalls hearing of one legendary rougarou run-in, when a young boy out for a stroll, armed with only his oyster knife, encountered the creature. “As the rougarou lunges forward he defends himself and cuts its arm, thus releasing the curse from that person and putting it onto [himself].”

But now, the story of the once-terrifying rougarou is changing, along with the coastal wetlands it has long called home. Over the last century, hurricanes, sea level rise, and problematic development projects, such as damming the Mississippi River, have caused Louisiana to lose more than 2,000 square miles of land. For decades, the equivalent of one football field of coastline was lost per hour; while the rate has slowed, the region’s long-term prognosis remains grim. And as the stomping grounds for the rougarou have disappeared, so have tales about the beast—until Foret made it his mission to save both.

Stories of the rougarou in Louisiana derive largely from 16th-century French legends of a beast called loup garou, essentially a werewolf. The name changed to rougarou in Cajun Louisiana because “‘l’ and ‘r’ are linguistically liquid consonants and they change places a lot,” says Barry Jean Ancelet, a Cajun folklorist and professor emeritus with the University of Lafayette. For instance, instead of labourer, meaning to plow, sometimes you’ll hear Cajuns say rabourer.

Once the rougarou settled into southern Louisiana’s swampy shadows, it took on some aspects of local Native American cryptids, such as a legendary Choctaw shapeshifting owl-witch. In fact, instead of wolfish features, most Cajuns will describe the rougarou as resembling a dog or owl. “No one agrees what it looks like because they don’t really have wolves in this part of our country,” says Nathan J. Rabalais, author of Folklore Figures of French and Creole Louisiana.

Foret grew up in southern Louisiana, between the Atchafalaya Basin and New Orleans, where stories of the rougarou are most often heard—and he wouldn’t venture into wooded areas at night because of them. Years later, as a middle school teacher, he’d mention the beast to his students only to learn they’d never heard of it. “I realized that parts of our folklore and our oral traditions were getting lost,” he says.

Foret is now director of the South Louisiana Wetlands Discovery Center, a nonprofit that educates students, in the classroom and on field trips, about the challenges of sea level rise, climate change, and living in a coastal community—one still recovering from 2021’s Hurricane Ida. “There’s a lot of blue tarps still on roofs everywhere,” says Foret.

For Foret and many other Cajun residents in the area, the real possibility that climate change will eventually force them from their homes is particularly upsetting. “We got kicked out of Nova Scotia, and now we’re getting kicked out of Louisiana and it just feels like there’s some generational trauma linked to being forced to move over and over again,” he says.

In 2011, Foret launched Rougarou Fest in Houma, Terrebone’s parish seat and largest city, as both a fundraiser for the center and a way to revive the fading cryptid tradition. At the annual October event’s rougarou costume contest, the fest’s mascot is reimagined hundreds of different ways, including as an eco-activist.

“That festival is cool because it links folklore to current issues and things that people need to be aware of,” Rabalais says. He sees it as an example of the way cryptids evolve alongside the cultures that created them. The rougarou once served to scare adults into being good Catholics, and children into staying home after dark, Rabalais says, adding, “Now there are other things to be scared of, like rising water levels and hurricanes.”

Such monster makeovers are common. More than a millennium ago, vampires were demonic vectors of disease, possibly reflecting the very real threat of rabies. Today, they’re suave and sexy, thanks in part to pop culture hits such as Interview with the Vampire, Twilight, and True Blood. Dragons, once the ultimate test of a hero’s courage, have been effectively domesticated. Werewolves have transformed, too, and not just into the Teen Wolf tv show and movie. Overall, “We’ve seen the evolution of the werewolf become a more sophisticated, debonair character,” Ancelet says.

Lapin, the trickster rabbit rooted in African folklore traditions that were brought to Louisiana by enslaved people, has also seen a transformation. “The trickster figure really went from being the bad guy, the one to watch out for, to being a hero,” says Rabalais, adding that the shift reflected the reality of the people who told and retold the stories. “People who didn’t have a lot of physical or social power in society found a way to survive through being clever.”

Even Louisiana’s infamous and very real alligators have undergone a rebranding. “Children’s authors have started using alligators as characters. You interact with them, they’re dancing and they’re nice. They’re not trying to eat you,” Ancelet says. “That kind of transformation happens and I suspect that what’s going on with this festival.”

But unlike sexy vampires or friendly alligators, Foret’s rougarou has been reimagined to champion a specific cause: protecting its habitat, which in turn will protect our own. “The rougarou is like our Smokey the Bear,” says Foret. “Only you can prevent forest fires, and so only you can save Louisiana’s wetlands.”

The source of storms and an (occasional) kidnapper, the massive ancient beast has inspired muscle cars and jet fighters.
Video • Wonder From Home