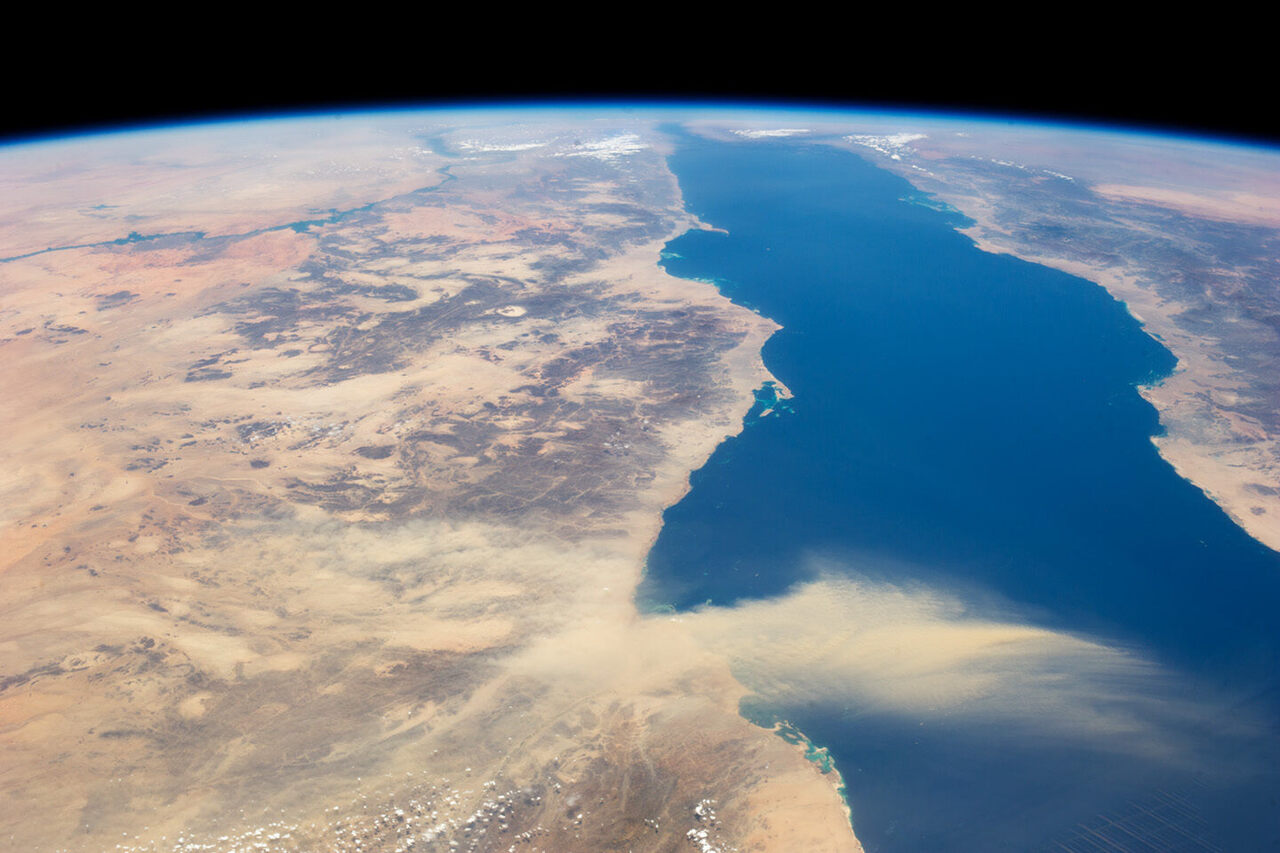 The Red Sea, dividing Africa and Arabia, may be the world's youngest ocean. ISS Expedition 36 Crew/NASA Earth Observatory
In This Story
Destination Guide

The Seven Seas are a lie. The bodies of water that the traditional title encompasses have changed over the centuries, but today include the North and South Atlantic, North and South Pacific, Arctic, Indian, and Southern. All of them are actually oceans. Seas, on the other hand, are by definition much smaller and at least partly enclosed by land—think the Mediterranean or Sea of Japan. (The North Atlantic’s Sargasso Sea, which is defined by the ocean currents that surround it, is an exception.) Geologists would go a step further, and categorize oceans based on the presence of oceanic crust: basalt created when Earth’s mantle coughs up magma along mid-ocean ridges. When continents, made of granite-based continental crust, tear apart, mid-ocean ridges sometimes emerge in that opening and act like conveyor belts, churning out magma that quickly cools, becoming basalt-based ocean floor. Mid-ocean ridges are how oceans are born, grow, and mature.

Right now, Africa and Arabia are pulling apart, a process called continental rifting, and the Red Sea between them is widening at an average annual rate of less than half an inch. Most models suggest that, over the past five million years or so, isolated sections of ocean ridge have popped up here and there as Africa and Arabia unzip from south to north. Most researchers believe the Red Sea is an embryonic ocean. But there’s a problem.

“Geologists, especially geophysicists, tend to make things overly complicated. They model the hell out of it,” says Nico Augustin, a marine geologist at Germany’s GEOMAR Helmholtz Center for Ocean Research Kiel. Augustin is the lead author of a recent paper in Nature Communications that offers a simpler but unconventional take on the Red Sea: It’s actually already an ocean, fully mature. A mid-ocean ridge, running along its entire length, has been pumping out ocean floor for the past 13 million years.

Determining how, when, and even whether the Red Sea became an ocean is important for a number of reasons, says geologist Bill Bosworth, exploration manager for the Cairo-based Apache Egypt Companies. Bosworth has done research in the region for years, and, while declining to comment on the new model specifically, says, “Everyone agrees that the Red Sea is the best present-day, overall example of a geologically young continental rift that has developed into—at least in part—a new oceanic rift, regardless of which specific model you adhere to.” Understanding the Red Sea’s backstory not only gives geologists a window into how older oceans were born—such as the Atlantic, which has a mid-ocean ridge running down its center—but also informs future plans for resource exploration and other projects, such as renewable geothermal energy. It even has implications for species evolution and dispersal. “The Red Sea has acted as a physical barrier between Africa and Arabia [and] has played a big role in whether some animal species have been able to migrate out of Africa (or not), including hominids,” says Bosworth. “Knowing when it became a seaway, which is tied to knowing its timing, is therefore very important.”

The roots of what may be the world’s youngest ocean go back more than 25 million years, when Africa and Arabia started to pull apart, creating the Red Sea Basin as the continental crust stretched and thinned. “This is the continental rifting,” says Augustin. “There is thinning and thinning and then—bang!—you have the crack all along the continent.” Most researchers believe that bang was more of a slow and ragged split, beginning around three to five million years ago and continuing today. “Our paper is the first that really boldly says we think we have it everywhere,” Augustin says, “and we think the seafloor spreading started more or less at the same time along the entire length of the Red Sea.”

Not everyone in the field is ready to boldly go along with Augustin’s new model, and declare the sea an ocean. In an email, Marco Ligi, a senior researcher at the Institute of Marine Science in Bologna, says of Augustin, “We have completely different ideas regarding the nature of the crust underlying the Red Sea,” and declines further comment. Other researchers familiar with the paper also declined interviews.

Roger Buck and Mike Steckler, geophysicists at Columbia University’s Lamont-Doherty Earth Observatory, who are not involved in the research, are more enthusiastic. “This paper is bringing things into the 21st century, in a good way,” says Buck, as Steckler nods beside him.

“The reason this area is controversial is this is the youngest example of a continental break-up event, and it has the same sort of features as all the other big continental break-up events,” Buck says. Stakes are high because figuring out what’s happening here could help answer many of the big questions we have about plate tectonics. “We’d love to know what controls the transition between the continents and the ocean,” says Buck. “That’s why it’s really exciting.”

The academic disagreement over the Red Sea is salty, in more ways than one. Beneath layers of newer sediment, much of its seafloor is covered with a blanket of salt that can obscure or distort many of the signals—chemical, magnetic, and otherwise—that geologists look for to understand what lies beneath. The current mainstream models about the Red Sea are based, says Augustin, on trying to weave together disparate and incomplete streams of information. “They try to combine different signals, with many, many ways to interpret it,” he says.

For the new research, he and his colleagues focused on “signals you can’t change.” They looked at seismic activity and something called the vertical gravity gradient, which is often used in oil and gas exploration to map subsurface features. Says Steckler: “The salt is a relatively thick, uniform layer so it doesn’t affect the gravity very much.”

“You can potentially see through this thick salt layer that exists almost everywhere in the Red Sea,” says Buck, who found the new approach—which relied mostly on satellite data rather than drilling or other on-the-ground methods—“kind of a cool thing.”

“We compared the signals we saw in the Red Sea to other oceans, and basically we found more similarities than differences,” Augustin says. He notes that the Reykjanes Ridge, a portion of the Mid-Atlantic ocean ridge near Iceland, is a particularly good analogue, though several times larger and easier to study. If you superimposed the geological features of the Red Sea onto Reykjanes, says Augustin, they would essentially match. “The Red Sea is just too narrow to see the whole picture,” he adds.

The massive salt deposits are themselves an interesting clue. The same planetary plumbing that can push magma up from the mantle can also trap seawater. When conditions are right, the water evaporates, leaving behind salt.

Don’t expect to see “Red Ocean” on a map anytime soon, however. Even if the new model is proven correct, Augustin himself says, “‘Red Sea’ sounds much nicer, even though seas are not connected to oceanic crust.”

“When does a sea become an ocean? I don’t know,” Buck says, contemplatively. Steckler chimes in: “We can add it to the ‘Seven Seas.’ Which are oceans.”

Podcast: Pics or It Didn't Happen

Researchers braved storms and monstrous underwater mountains to learn why one region’s earth-shaking is so peculiar.
science

It was stored inside limestone beneath the seafloor.
science

Greenland Has a Grand Canyon Beneath Its Ice, Carved by Ancient Floods

An online video raised a strange question: Do whale sharks make sounds? And would it matter if they did?
List

12 places to marvel at the history of human language.
Video • Gastro Obscura

5:11
Want to see fewer ads? Become a Member.
From Around the Web
Atlas Obscura Trips
In the Footsteps of Pharaohs: Exploring Ancient Egypt
View This Trip
Thanks for sharing!