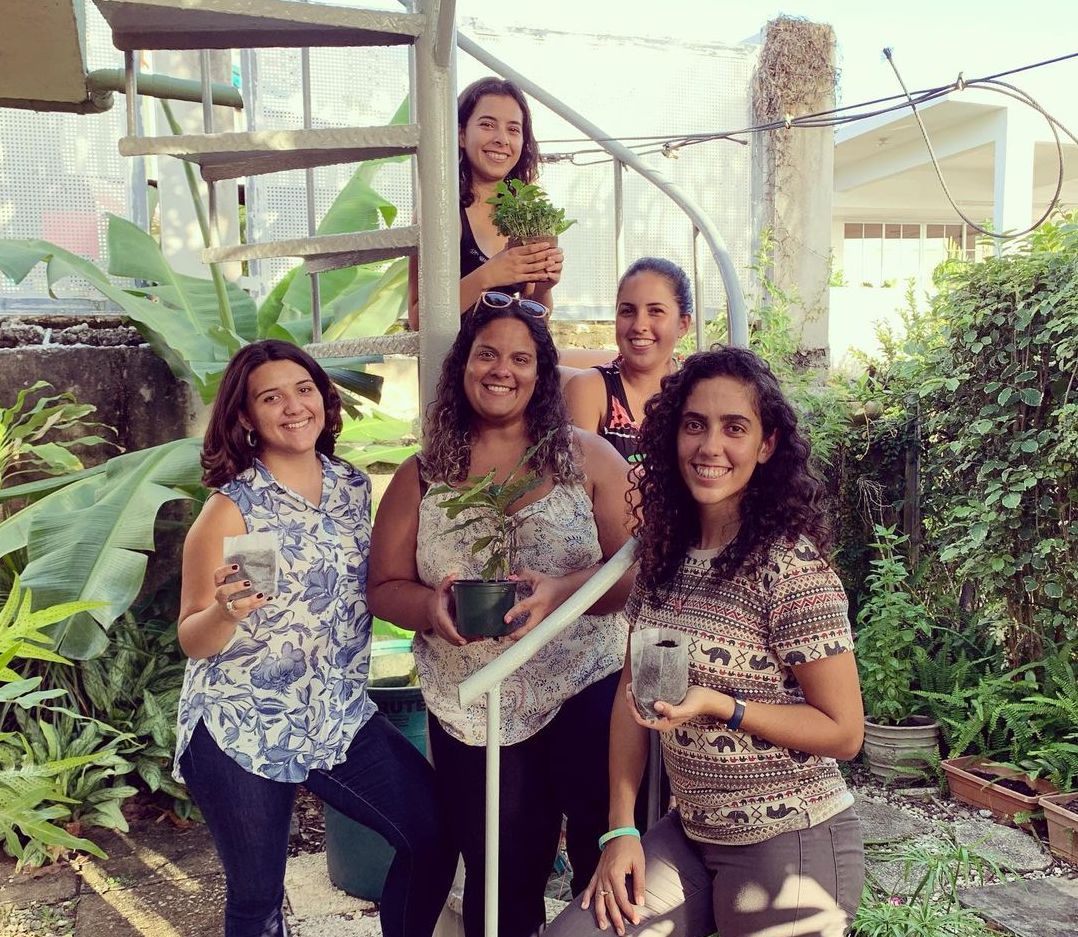 A small group of dedicated environmentalists has distributed fruit trees across Puerto Rico. All images courtesy of CYEN PR
In This Story
Destination Guide

When the fury of Hurricane Maria subsided long enough to allow Amira Odeh to leave her grandmother’s home in Bayamón, Puerto Rico, she stepped into a terrifying scene. “It was like waking up in a sci-fi, alien-invasion kind of movie,” she says. “All of this destruction.”

The storm that swept through the Caribbean in the fall of 2017 devastated Puerto Rico, where Odeh was born and raised. High winds, floods, and landslides killed people across the island, destroyed the power grid, and wrecked innumerable homes. Next came months of hardship, as shuttered ports and a carelessly executed aid effort from the mainland United States meant few supplies for weeks on end. “We didn’t have anything to eat,” says Odeh. While the semi-official death toll from the storm is 4,645, the lack of food, clean water, electricity, and shelter led to many more preventable deaths.

But in the immediate aftermath of the storm, the memory that most stands out for Odeh was that first glimpse of the post-Maria landscape. “There wasn’t green anymore,” she says. “A tropical landscape always has green. And the only thing green was the grass. There were no trees.”

It wasn’t just in her neighborhood. Within hours, Hurricane Maria wiped out 80 percent of Puerto Rico’s agriculture. For an island that already depended on imports for much of its food, this compounded the agony of Maria’s impact.

The same day, Odeh called her friend Dariana Mattei, who was living on the mainland. Only the year before, they had launched the Puerto Rican branch of Caribbean Youth Environment Network (CYEN PR). “We had the group, and we were figuring out where to go,” she says. “And then, we got the impact of this immense hurricane that was disastrous.”

The two quickly hatched a plan. “She was thinking about how to bring seeds to help the farmers who lost everything. And I was thinking on how to reforest,” she says. What ensued, over a shaky internet connection that day, was a remarkable grassroots effort to plant fruit trees and food plants across Puerto Rico. The “Regreen Puerto Rico” initiative was born.

Seven members of the CYEN PR, all women, started driving to the most afflicted areas of the island with emergency supplies, as well as trees and seeds for plants such as tomatoes and peppers. “Our goal is to give people an opportunity to reconnect to the soil, to the ground, to learn about our local foods, to know that not everything needs to come from the supermarket,” Odeh says. But, she adds, “we know we’re going to get more drought, more storms. With food-producing plants in backyards across the island, we’re hoping that communities can get some resilience, even if it’s in a small way.”

Over Zoom, Odeh twists to peek through her wooden shutters at the trees she’s growing in her yard for distribution. “Soursop, papaya, lemon, orange … What else do I have here? Tamarind, sometimes we have avocado, coco, plantains … those are the most common ones.”

When the group receives donations, they buy fruit trees from greenhouses. “But most of them we grow in our own backyards,” she says. “Our backyards are all overtaken by pots and plants.”

Odeh isn’t a farmer or a horticulturist. Instead, she has a degree in hydrology. But as a Puerto Rican environmental activist, she is intimately aware that many of the island’s issues are interconnected. “One of the reasons I got motivated to plant trees is that I’m a hydrologist. And here, we have a huge issue with water,” she says, noting that increasing the number of trees on the island will help prevent sediment from getting into the water supply.

She’s not alone in turning her attention to agriculture, though. The younger generation in Puerto Rico, especially those who lived through the hurricane, are increasingly passionate about shoring up food security on the island, especially under the increasing effects of climate change. “The newer generation is super woke and doing amazing agricultural work,” she says.

So far, CYEN PR has handed out fruit trees and seeds to families in every one of the 78 municipalities of Puerto Rico. In the early years of the project, the group all packed into one car “like sardines,” Odeh laughs, “driving 10 hours in one day, house to house. It was exhausting.” But recently, the group transitioned to creating community fruit tree parks. So far, the group has planted 20 parks, everywhere from vacant lots to empty spaces next to basketball courts.

The group is getting noticed for their work. In 2018, Univision honored Mattei and Odeh as “Agents of Change” at the television network’s yearly Youth Awards for their reforestation work. Odeh also gushes about how CYEN PR this year received a small grant from the One Young World Foundation. “For us, it feels like millions,” she says. “Because we were working on this out of our own pockets.”

One town even invited them back to see their flourishing fruit forest, welcoming the group with a parade, a concert, and a party in their honor. It’s both gratification on a personal level, Odeh says, as well as encouragement to continue the work. “Our first plan was to reach a thousand families with fruits and seeds,” she says. “And then we got to that number, and we just kept going.”

How to Forage From the World's Oldest Tree

These "living fossils" are everywhere; their nuts are delicious.
trees

Everyone from Alan Ginsberg to The Rolling Stones has stopped by this classic dive bar.
Bayamón, Puerto Rico