Could a Gene Bank Save Endangered Plants From Extinction? - Atlas Obscura
Want to see fewer ads? Become a Member. 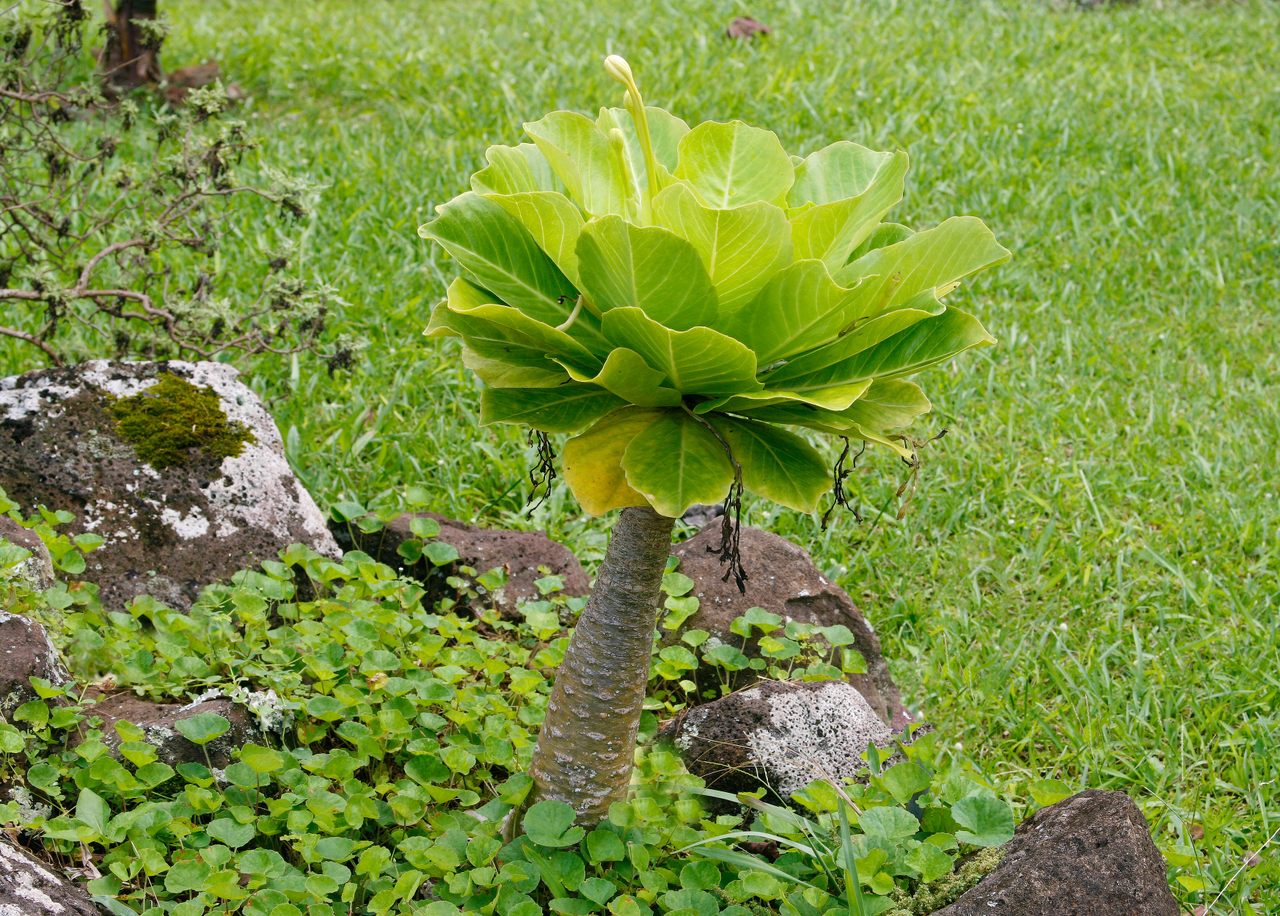 Brighamia insignis, shown here in a botanic garden, is known as the ‘ōlulu in Hawaiian; in English, it’s jokingly called “cabbage on a stick.” Steve Pridgeon/Alamy Stock Photo
In This Story
Place

It was 2013, and botanist Seana Walsh had a pollen problem. She was working at the National Tropical Botanical Garden on Kaua’i, trying to breed a severely endangered Hawaiian plant. Brighamia insignis is known as the ‘ōlulu in Hawaiian; in English, it’s jokingly called “cabbage on a stick.” But when Walsh tried to collect pollen from the staminal columns of different flowers in the garden, almost nothing came off. The little pollen Walsh did collect turned out to have extremely low viability—similar to low sperm count in animals. For the ‘ōlulu, this meant low odds of the plants successfully reproducing.

The urgency of Walsh’s work came from an alarming fact: Only one ‘ōlulu plant was known to exist in the wild, hanging from its preferred cliffside habitat on Kaua’i’s Nā Pali coast. Walsh had never seen that particular individual, but she’d visited other plants in botanical gardens across the Hawaiian Islands. Now, she was studying the plant’s breeding strategy (likely accomplished with help from moths in the wild) and attempting to coax the reproductive process along by hand.

Walsh wasn’t sure what had caused the paltry pollen harvest. Maybe it was the result of environmental differences between the botanical garden and the natural habitat—it might be hotter or drier, for example, or lacking certain nutrients in the soil. Or maybe there was some Hapsburg effect happening: the plants had experienced too much inbreeding.

But what if Walsh could play matchmaker for Brighamia insignis plants with drastically different genes? Botanical gardens and private greenhouses around the world have cultivated thousands of them and other plants, in part to study and preserve species that are rare, or potentially useful. Maybe she could mix and match distinct individuals from the same species, creating a more genetically robust population of plants, and then return those healthy cabbages to the wild.

Walsh and colleagues envision what they call a plant studbook. The idea came from a tool for captive breeding in zoos: population management software, or PMX, which works to track the lineage of different species. Say you’ve got Siberian tigers in a dozen zoos around the world, but don’t know which individuals would be best suited as mates. If the species is being tracked by the software, it’s relatively easy to answer that question. (The logistics of bringing the new couple together may be a lot more complicated.)

Often, when plants are as rare as the ‘ōlulu, they’ll be preserved in seed banks such as the Svalbard Global Seed Vault. But only 80 percent of plant species are amenable to the seed banking technique. The other 20 percent don’t tolerate freezing, fail to produce enough seeds, or have some other quality that makes them less than ideal candidates for storage. In these circumstances, having a studbook available for breeding plants would be a huge advantage. “It’s a piece of the puzzle that doesn’t yet exist for botanic gardens,” says Kayri Havens, a plant scientist at the Chicago Botanic Garden.

Havens and a handful of others have teamed up with Walsh to test the idea out on three plants other than the ‘ōlulu: a cycad endemic to the Bahamas called Zamia lucayana, currently managed by the Montgomery Botanical Center in Florida; the Quercus oglethorpensis tree, threatened by chestnut blight; and Amorphophallus titanum, the famously smelly and seldom-blooming “corpse flower.” The researchers are currently working to document the lineage of these plants in garden collections around the world, either by genetic sequencing or based on their collection history. “There are as many as 50,000 species that might benefit from this approach,” Havens says.

We live in an age of extinctions, and plant species are going extinct even more frequently than animals. In 2010, 844 plant taxa were found to be extinct in the wild. Recent research found that since 1900, an average of eight plants have gone extinct per year. Botanic gardens are in a unique position as stewards of the last living individuals of numerous species. “We know these species will go extinct if we don’t do something, because we’re the last place they’re at,” says Andrea Kramer, another botanist at the Chicago Botanic Garden who’s involved in the project.

To understand the ancestry of Brighamia insignis, Walsh and molecular ecologist Jeremie Fant looked at the genetics of the plant to see how much diversity was left in garden populations, and identified three genetic clusters for the plant. This is too expensive a strategy to be used on every species, so for now the idea is to track mother populations, which produce the seeds or cuttings that grow into new plants.

But it’s a tricky process. Plant reproduction is significantly more complicated than most animal reproduction: Some plants reproduce asexually, some are pollinated randomly by the wind, some rely on specific birds or insects to act as pollinators (in the case of botanic gardens, humans fill in). The team thinks its technique could revolutionize how botanical gardens manage their collections. Even if the plants can never be returned to the wild, keeping them healthy will still mean they won’t go completely extinct.

Christine Edwards, a conservation geneticist at the Missouri Botanical Garden who is not affiliated with the project, thinks the concept holds great promise. “This type of software may allow botanical gardens to maintain fewer individuals while preserving a large proportion of the genetic diversity of a species,” Edwards writes in an email. “This may allow them to have additional capacity to conserve a greater diversity of endangered plant species.”

There are even bigger plans afoot for the ‘ōlulu. If the researchers can produce more robust plants, the goal is to get them planted back in the wild by 2023 or 2024. Right now, researchers aren’t sure there are any wild plants left—drone surveys are currently ongoing to see if the lone Kaua’i plant is still there. Any specimens that they plant in the wild will still have to contend with all the things that pushed them to the edge of extinction: hurricanes, ravenous goats, competition from invasive plants. But at least they’ll be genetically hardy.

Walsh is cautiously optimistic that the ‘ōlulu could come back from the brink. “If you asked me if I thought it was going to be possible to restore Brighamia insignis to the wild before I knew about these possibilities, I probably would’ve said no,” Walsh says. “But now I’m excited to see what comes out of all this.”

* Correction: This caption previously identified the plant as the “only known wild specimen of the ‘ōlulu.” It was one of the last wild specimens.

A lush, green paradise for the dead.
botanical gardens

In botanic gardens, the lineage of a famously smelly plant is threatened. What can save it?
trees

The Mountains Where Manna Flows From Trees

Giulio Geraldi brought cultivation of the sweet stuff back from the verge of extinction.
Video