In Kaua‘i, Botanists Rediscover an Extinct Plant Once Mistaken for Another Extinct Plant - Atlas Obscura
Want to see fewer ads? Become a Member. 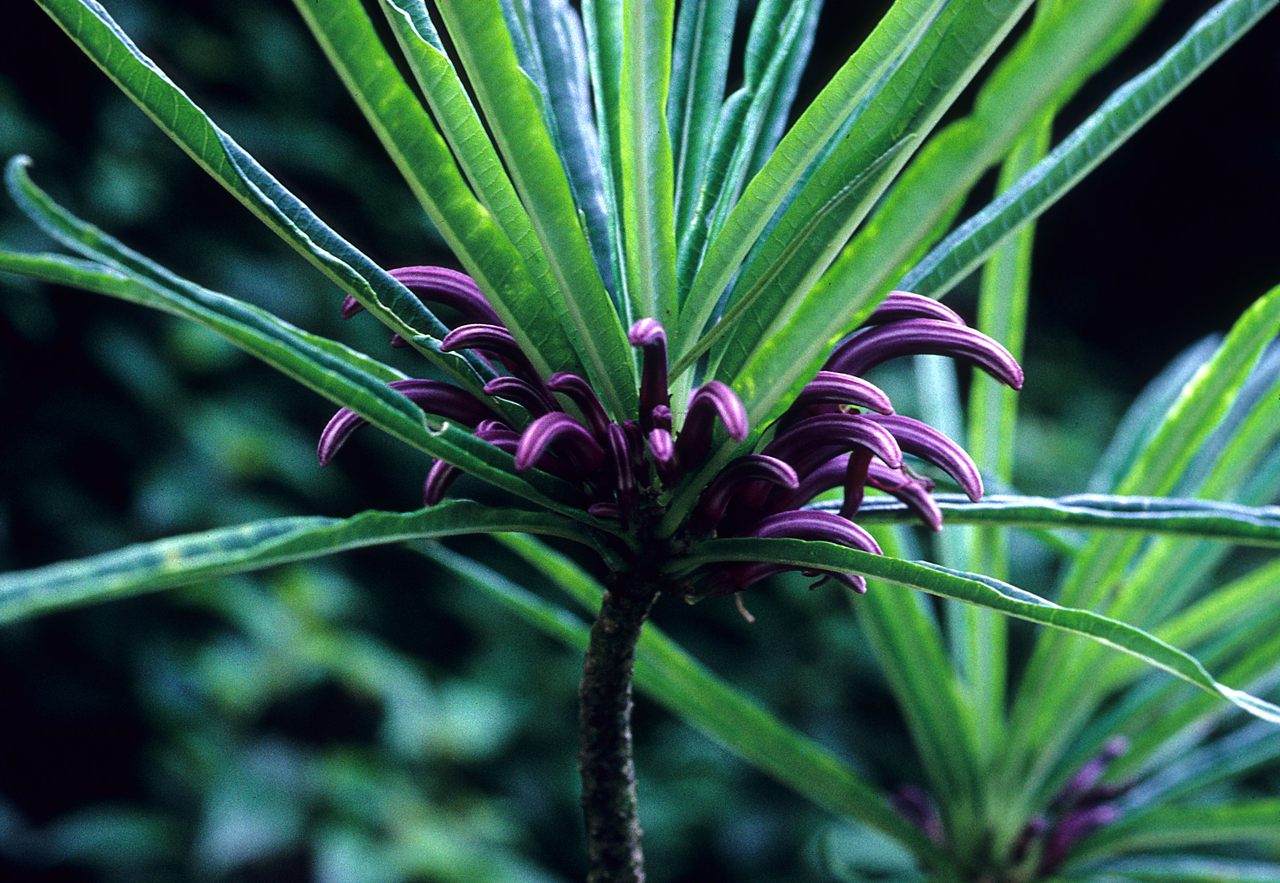 In 2017, botanist Ken Wood ran into an old friend in the forest. He was wading through a thicket of ʻōhiʻa trees in a private valley in Kauaʻi, taking an inventory of rare plants for his job at the National Tropical Botanical Garden on the island. It was fairly routine work—collecting specimens, recording their GPS locations, and describing the other plants growing in the area—until he spotted something familiar, a spiky green plant with purple, tongue-like flowers bursting from the trunk like stars. It was Cyanea kuhihewa, a rare Hawaiian lobelioid that Wood himself had first discovered almost 30 years ago, and was, until recently, believed to be extinct. “When I saw the Cyanea, time stopped,” he says. “I knew exactly what it was because of my intimate relationship with it.”

This newly discovered population of C. kuhihewa has allowed the National Tropical Botanic Garden a new chance at saving the species, according to a recent study in Plants, People, Planet, coauthored by Wood.

When Wood first discovered C. kuhihewa in 1991, he thought it was an entirely different species: C. linearifolia, which actually is extinct. He and a team of botanists from the botanic garden had helicoptered to the headwaters of a very remote, very tall waterfall in the Limahuli Valley in northern Kauaʻi. They weren’t looking for anything in particular, and were just set on surveying the plants growing in the remote and unexplored area. “But we were all talking about [C. linearifolia] that day,” Wood says. “It was one of those species that’s in my subconscious that I kept in the back of my mind to look for.” At the time, C. linearifolia was the only species of Hawaiian lobelioid (in the bellflower family) known to have narrow, linear leaves—hence its name—and was last seen in 1957, presumed extinct due to the invasive weeds and rats that plague Kauaʻi.

Wood spotted a large tree sprouting near the plunge pool at the top of the waterfall and decided to forge ahead, alone. He scaled it with the help of his spiked, split-toe jika-tabi shoes, and once on top, spotted unusual Cyaneas that looked a lot like C. linearifolia. He climbed to the plant and collected a specimen for study. “I remember thinking, there is some magic out there in the universe,” Wood says. “I laughed.” Everyone else on the team quite reasonably agreed the plant must represent the rediscovery of the extinct species, and the Hawaiian botanical community rejoiced.

Wood’s specimen eventually went to Thomas Lammers, a botanist at the Field Museum in Chicago, who realized something was amiss. Wood’s Cyanea had flatter leaves and larger flowers than the reference sample of C. linearifolia. Lammers concluded, surprisingly and maybe a little sadly, that Wood had actually discovered an entirely new species of Cyanea, and that C. linearifolia must still be extinct. The new species was named C. kuhihewa—in Hawaiian, kuhihewa means “to suppose wrongly”—and, like many species in Hawaiʻi, immediately declared critically endangered by the International Union for Conservation of Nature.

Just a year later, however, Hurricane Iniki destroyed much of the canopy forest at Limahuli, paving the way for invasive rats, slugs, and plant diseases to colonize the area. The only known population of C. kuhihewa declined until the last known plant died in 2003, according to the study. This kind of blinking out is tragic but common in Hawaiian conservation, where dwindling populations of endemic species are attacked on both natural and unnatural fronts. “With one single population, you need just one landslide and it’s gone,” says Nina Rønsted, the director of research and conservation at the National Tropical Botanical Garden. Scientists from the garden are still searching for the last known wild ‘ōlulu plant, which may have died since it was spotted in 2013 in Kauaʻi. And in late 2019, the garden rediscovered a rare cousin of the hibiscus that was discovered in 1991 and declared extinct in 2016.

But C. kuhihewa never left Wood’s mind. Many of the areas he surveys are deep valleys or steep cliffs accessible only by helicopter. There was always the chance of other populations of C. kuhihewa, but finding them would take some time. In 2017, Wood found himself in the right kind of habitat, just a few deep valleys away from where the species was originally found. He’d flown in by helicopter, to a remote ridge thick with matting ferns. It was his last day in the valley, and his last chance to make this kind of discovery in the area. So when Wood saw three individual plants with long, narrow leaves, he didn’t have to hesitate. “The magic was here again,” he says. “Time stopped again, and it was silent. I felt this type of elation, a kind of endorphins, a high.”

Luckily, since 2017, no landslide or hurricane has come for Wood’s new population, but the botanical garden is taking no chances. Botanists have installed a thicket of rat traps to prevent the rodents from dining on the plant’s seeds. Wood visits the population often to collect those seeds to propagate the plants in the garden’s facility. When they sprout, they’ll be planted around the Limahuli Valley to increase C. kuhihewa’s chance at survival. “We currently have about seven plants in our nursery,” Rønsted says. “We hope to get 30 to 50 plants out in the Limahuli area, so that it becomes a resilient, sustainable population that can thrive.”

Meanwhile, Wood is still on the lookout for any new populations of C. kuhihewa in the wild that could increase the species’ genetic diversity. “Discovering this new population gives us a new chance to save this thing, as we didn’t make it last time,” Wood says. “But there’s always more hope.”

Could a Gene Bank Save Endangered Plants From Extinction?

A "plant studbook" might help botanic gardens bring rare breeds back from the brink.
islands

The state has some strict standards to be named an exceptional tree, and competition is pretty stiff.
insects

The bean-sized snail has persevered despite hundreds of related species going extinct in recent decades.
Video • Object of Intrigue