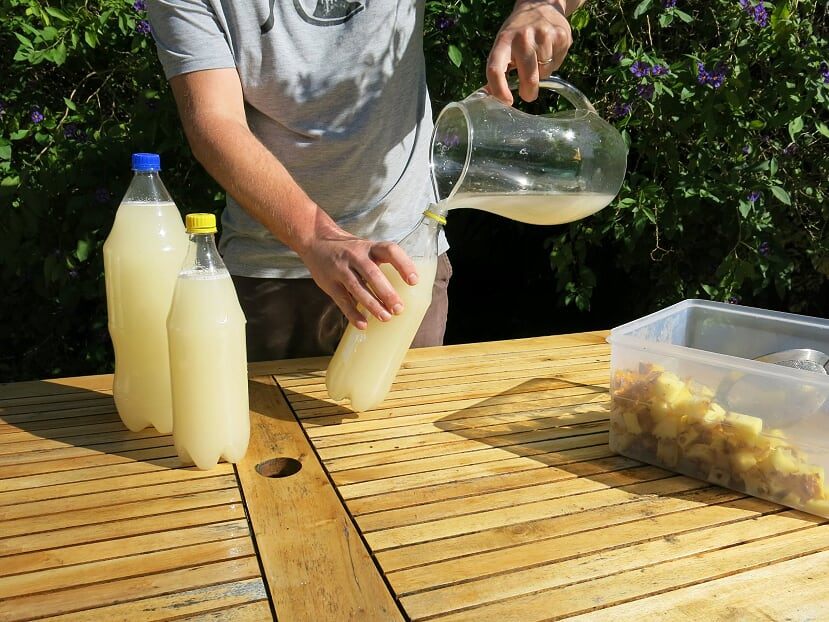 Plastic bottles are a must to avoid potentially dangerous explosions. All photos by Nick Dall

On March 15, the day before South Africans were plunged into a lockdown which prohibited sales of alcohol, cigarettes, and takeout food, lines outside liquor stores spilled into the streets. One bottle store owner told me he did a month’s trade in a day.

Three weeks later, when President Cyril Ramaphosa made it clear the booze ban wouldn’t be lifted anytime soon, South Africans started to get desperate. Bottle store break-ins and drone-assisted drink deliveries made the news across the country. Then came the tenfold leap in pineapple sales: from 10,000 a day to nearly 100,000.

Thirsty South Africans have turned to making their own beer out of pineapples. In normal times, you can get sloshed on pineapple beer at the Big Pineapple, a 56-foot fiberglass construction in subtropical Bathurst. But these are not normal times. Luckily, pineapple beer—which is technically more of a wine or cider, as there’s no boiling involved—is easy to make, and can even be quite pleasant to drink.

You can turn any fruit (even a carton of fruit juice) into booze, says Greg Casey of Cape Town’s Afro-Caribbean Brewing Company. Here’s his hard-to-forget summary of Brewing 101: “Yeast eats sugar, farts CO2, produces alcohol.” Pineapple, as it happens, is one of the easiest fruits to ferment because it contains lots of sugar, and its skin is packed with natural yeasts (you can sometimes even see the white stuff growing on the skin.)

Pineapples hail from Latin America, and pineapple beer, called tepache, is a popular drink in Mexico. Despite the fact that pineapples were only introduced to South Africa in 1860, pineapple beer is made by most segments of the Rainbow Nation. My own grandmother, the daughter of an Anglican vicar, was famous for her particularly potent brew. Stoffelina Johanna Adriana de Villiers’ 1951 Kook en Geniet, the bible of Afrikaans gastronomy, includes a recipe for pynappelbier, and there’s even a traditional Zulu version known as mfula mfula, which dates back to an old law banning Black South Africans from purchasing or consuming alcohol.

After instruction from both Casey and cult winemaker Chris Alheit, whose first forays into fermentation involved “a nasty Tupperware of pineapple skins under my bed in high school,” I set about making my own. After paying top dollar for two pineapples (prices have more than doubled due to the homebrewing trend) I removed the spiky green bits and diced the rest, unwashed skins and all, before bunging it all in a plastic container. To this I added a cup-and-a-half of sugar, a gallon of water, and a sachet of regular baker’s yeast.

This last addition is slightly contentious. Alheit first argues that the natural yeasts present in the skin should be allowed to work their magic. But he does eventually concede that “a tiny sprinkle” of store-bought stuff will see to it that the ‘good’ natural yeasts win out over the ‘bad’ ones that can give the beer a funny taste or make you slightly ill. Casey, meanwhile, says the best way to achieve a pleasant end product is to use brewer’s yeast, which won’t impart any undesirable flavors, and to pasteurize the mixture by boiling it.

But he’s the first to admit that this goes against the whole idea of cheap ‘n nasty lockdown hooch. “We’re not following the German Reinheitsgebot here,” he laughs, referring to the law limiting what can be put into beer. “We’re just throwing a bunch of stuff together to make pineapple-flavored alcohol.” In the spirit of the lockdown regulations, some brands have even pulled brewer’s yeast from the shelves to keep it from being used for homebrewing.

After giving my concoction a healthy stir, I closed three corners of my plastic tub’s lid, leaving the fourth one open. Sealing the vessel tightly would end explosively, but leaving it open to the elements would attract fruit flies. To sidestep this issue, I popped the whole thing in a large cooler box, which I closed and moved to a cool bathroom. Both Casey and Alheit tell me that keeping the mixture at around 18°C (or 64°F) for the duration of the ferment is key to achieving a desirable brew.

Three days later, I strained the mixture into a jug and poured it into clean plastic Coke bottles. Glass might be the classier option, but given that I have no idea how much CO2 is being farted out by my concoction, putting the fermenting mix into glass bottles could turn them into grenades.

The bottles can now go back in the bathroom to continue fermenting and carbonating. To avoid explosions, Casey advises checking on them daily and releasing a little gas if they feel too hard.

After three days at room temperature, the bottles should be moved to a fridge for a final 48 hours, as liquid absorbs CO2 more easily at colder temperatures. While it might be tempting to skip this step (especially if your bar has run dry), it could be the difference between barely-drinkable and quite-nice pineapple beer. When I cracked my first bottle, I was rather pleased with the results: It tasted dry and rather sophisticated, somewhere between a sparkling wine and a cider. If I had to guess, I’d say it’s about 4 percent alcohol.

But others haven’t been so lucky. Kirsten Morreira, an editor friend who ran out of booze long before I did, has already made a few batches, with varying success. “My main problem is often that it’s too sweet, because not all the sugar has fermented,” she says. (Casey says this might be because she killed the yeast by letting her brew get too warm.)

With so many variables at play, both Alheit and Casey admit that their own efforts at making pineapple beer have been rather hit or miss. But when I raise the possibility of killing yourself with a bad batch of pineapple beer, Alheit laughs at me. Casey is similarly dismissive, but he does stress the importance of keeping everything clean, as bacteria are far more dangerous than booze. (“Don’t play with raw chicken while you’re making it,” he warns.) The consensus? If you’re brave enough to make your own sourdough, you can definitely try this.

Which brings us back to Morreira, the only one among us seriously brewing pineapple beer to drink. “None that I’ve made has been so great that I’d offer it to anyone else,” she concludes. “But it’s generally drinkable, and just alcoholic enough to make it worth it.”

Art Challenge: Readers Show Us How They Map Their Worlds

A past global staple you've never heard of, maslins are poised for a comeback.
bars

Once places of refuge, these Anglo-Indian bars are now institutions.
architecture

A South African bar inside a hollowed out 6,000-year-old Baobab.
Genoa, Nevada