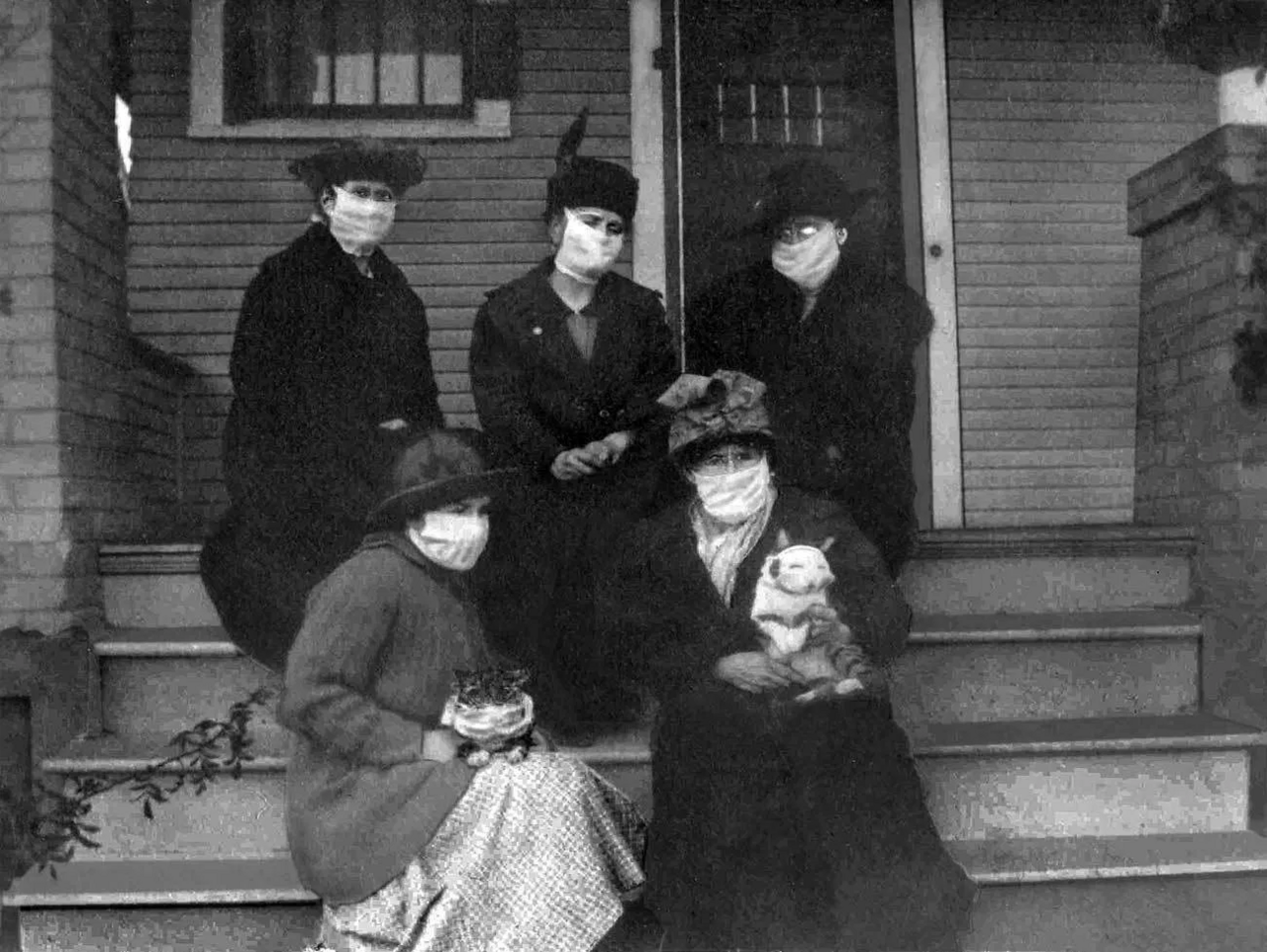 Tommy the cat is on the left, and Golly on the right. Courtesy Dan Eskenazi
In This Story
Place

An old-timey peepshow allows visitors to gawk at some of the world's most freakishly large footwear.
Destination Guide

Dr. Woods Hutchinson had opinions about a certain epidemic. “The reason for the spread? Pig-headedness, not another thing,” he raged in in Des Moines on November 25, 1918. “We knew it was prevalent in Europe and that it would find its way here.” His speech on the so-called Spanish influenza was colorful, to say the least. “The ‘flu’ germ doesn’t care a hang for your state of mind,” he noted. “After he takes up residence in your nose, he doesn’t give a blankety-blank whether you’re afraid of him or not.”

Nevertheless, Hutchinson was anti-quarantine. Instead, he whole-heartedly espoused the use of masks, pointing to the West Coast, where some cities made mask-wearing mandatory in public. Photos from the time show people going to and fro, with the lower halves of their faces swathed in gauze. But some Americans took flu safety one step further: they masked their cats, too.

One image, dating from the years when Spanish flu rampaged across the United States, shows a unknown family of six, in Dublin, California, all wearing the standard mask of the time: “white and fastened around the head,” as Catharine Arnold writes in Pandemic 1918: Eyewitness Accounts from the Greatest Medical Holocaust in Modern History. A behatted woman holds a bouquet of flowers. And the family patriarch holds a tense-looking masked cat under his arm, like a loaf of bread. Faint wrinkles under the cat’s right ear show where the gauze is bunching up, and a faint shadow marks the spot of its triangular nose.

People worldwide are fretting over their pets catching COVID-19: A recent study suggested that cats can contract it, at least under laboratory conditions. Dogs seem to be less susceptible, though dog masks have popped up on eBay. In February, news stories showed unfortunate cats in China whose owners covered their faces completely with masks, simply punching out holes for the eyes.

The photos inspired worldwide hilarity, and perhaps they were meant to—it’s hard to imagine a cat actually putting up with a face mask for any significant amount of time. Humor may have been a motivation for photographs of masked pets from the early-20th century, as well. The families and friends in these images may have felt fear, apprehension, or even the weight of history on their shoulders. Putting Puss in a mask probably would have lightened the mood.

But there was genuine fear that pets could carry Spanish influenza. In Allentown, Pennsylvania, one councilman insisted that dogs and cats were responsible for the spread of the illness, proposing that they all be killed or at the very least shaved to prevent more infections. In Phoenix, it was rumored that dogs could carry influenza. Police killed strays, while some people killed their own pets. According to the U.S. Centers for Disease Control and Prevention, some influenza viruses can pass from certain birds and mammals to humans, though it’s rare for them to directly make the jump to people.

When dogs did get the mask treatment, it was treated as a joke. “What is believed to be the first masked ball game ever staged,” trumpeted once newspaper, when two teams went head-to-head in Pasadena, California, in early 1919. The umpires, players, spectators, and the mascot’s dog gathered for the game in linen and cheesecloth masks. The dog’s picture made the local paper, as did that of Yancia, a 5-year-old Boston bulldog whose masked muzzle graced the pages of The Seattle Star in late 1918. “This Seattle Dog Wears Flu Mask” read the headline, and her owner told the paper that “she has made the best of it in good spirit, as we all have.”

According to Tyler Phillips of the Dublin Heritage Park & Museum, the identity of the family of six was who posed with their cat a century ago is unknown. The same is not true of another photo, taken in 1918. In it, five women and two cats sit on a porch. All of them are wearing masks. The names of the women and the cats are listed on the back: “Top row, Anna Kilgore, E.K. Barr, Ms. Anna S. Shaw. Lower row, Penelope and Tommy, Mrs. Shaw and Golly.”

The photo is part of the collection of Dan Eskenazi, the curator of Seattle’s Giant Shoe Museum. Eskenazi’s friend Pat Dorpat, a columnist and historian, found that four of the five women lived together in a still-standing house on 43rd Street in the Wallingford neighborhood of Seattle. One can imagine the ladies—bored roommates during a seemingly endless epidemic—trooping outside in their glorious hats, then slipping the inglorious masks over Tommy and Golly’s heads. The photographer who snapped their photo captured a moment of levity in the middle of a scourge.

Around the World in Pandemic Street Art

From war to exploration to pleasure cruising, pets have often accompanied us on the oceans.
pet cemeteries

Perhaps, but humans all over the world, from Siberia to Illinois, have a long history of burying animals with respect.
animals

With proper training, dogs can follow their noses to human and animal remains from bygone centuries.
plague

For centuries-old bars, a pandemic is nothing new.
Video