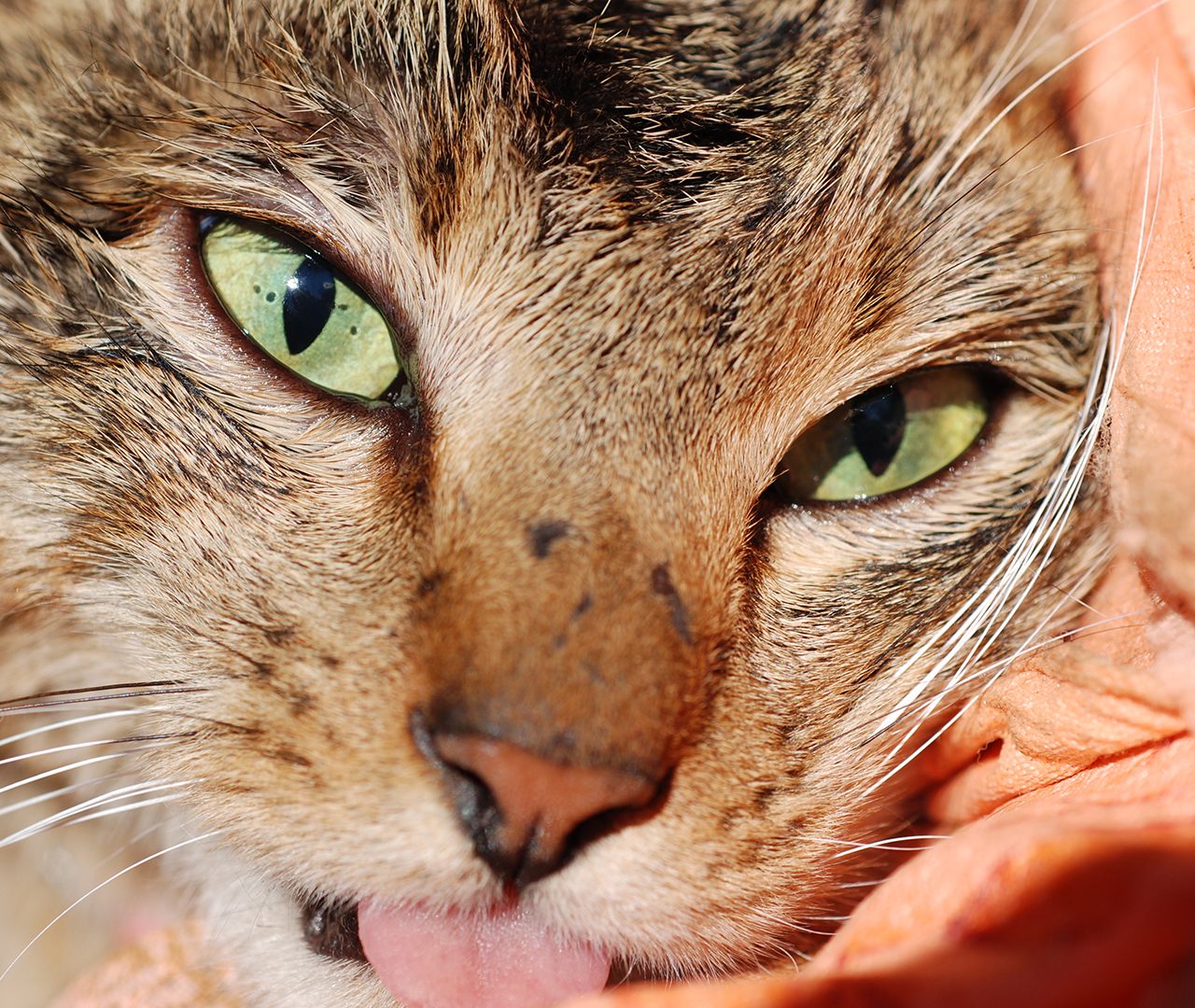 According to recent genetic analyses, "forest cats" may have arrived on the island as far back as 1,000 years ago. Michelle Sauther
In This Story
Destination Guide

On the island of Madagascar, evolution has worked overtime assembling a menagerie like no other on Earth. That makes any interloper’s history all the more germane.

Take the resident non-native “forest cat,” for example—an animal whose origins have been the subject of much debate. Many scientists have long thought the feline’s ancestors were small wildcats that somehow reached Madagascar from mainland Africa. Others posited that Felis catus, the domestic cat, was also part of the gene pool (though historical and ethnographic data suggest that domestic cats didn’t arrive here until the 1800s—with a U.K. ambassador—after the forest cat was already established on the island nation).

Now, new evidence tells a whole different story. Recent genetic analyses by Michelle Sauther of the University of Colorado and colleagues indicate that the oversize, tiger-striped, lemur-eating feline came to the island by way of Arab trading ships up to 1,000 years ago.

After trapping and drawing blood from 30 forest cats in two Malagasy sanctuaries—the Bezà Mahafaly Special Reserve in the southwest and Ankarafantsika National Park in the northwest—the international team of scientists compared forest-cat genes to a host of cat genomes from around the globe. The data, reported in Conservation Genetics this month, tell a Middle Eastern tale: The animals descend from domestic cats of the Arabian Sea region, which includes the islands of Lamu and Pate, Dubai, Oman, and Kuwait.

Whether the ancestors were beloved pets, ship ratters, or sneaky stowaways, “these findings are consistent with human migration patterns of people arriving from the east,” says Tim Tetzlaff, chair of the Madagascar Fauna and Flora Group, an international consortium of zoos and conservation organizations, who was not involved in the study. “With so many fundamental mysteries about Madagascar’s past, beginning with how its iconic wildlife even got here, it’s gratifying to have any one of these questions sorted.”

Madagascar, an island country in the Indian Ocean with exceptionally diverse habitats and a host of species that evolved here and live nowhere else, has its own small carnivores. The largest, called the fosa (or fossa), is often described as “cat like”—or, some say, a cross between cat, mongoose, and dog—though it is not actually a felid. A member of the Eupleridae family, which covers all of the island’s meat-eaters, it prefers a deep-woods habitat and leans on lemurs for much of its nourishment.

“Fosa are only found on Madagascar; they are meant to be here,” says wildlife biologist Luke Dollar of the Department of Environment and Sustainability at Catawba College in North Carolina, who was involved in the genetics study. “They evolved to be, and remain, the top predators of Madagascar’s intact forests.”

Meanwhile, the non-native forest cats—sort of supersize tabbies that Sauther describes as having “uniform mackerel tabby markings,” straight tails, and bodies “about double the size and more robust than the wizened tabbies and little white kitties” from forest-bordering villages—have long been observed on the island. But no studies were dedicated to them until now.

Written evidence of their presence on Madagascar that clearly distinguishes them from other felines goes as far back as 1870. But the forest cats had plenty of time before that to hop aboard a Madagascar-bound vessel. Trade across the Arabian Sea has gone on for thousands of years, with a heavy influence by Arab visitors reflected in the island’s languages and architecture.

Sauther’s interest in the cats’ origins was piqued when one of her own study subjects, a ring-tailed lemur, went missing. “[Its] microchip turned up in the scat of one of the forest cats,” she says. “So, both the fosa and these other cats are noshing on my lemurs!”

Meanwhile, fosa appear to be taking out some of the competition, according to cat bones that one of Sauther’s students found in fosa poop. That fosa are eating some of the non-native felines is good news for other native species. Some Malagasy people are known to trap, kill, and eat the cats as well.

Exotic species, whenever and wherever they show up, can be devastating to local wildlife. The cats and dogs that live in Madagascar’s villages, for example, share pathogens extensively with the native animals, Tetzlaff says. “If striped forest cats do the same, this adds the additional wrinkle that these naturalized animals may be taking these [viruses and parasites] deeper into the forest.”

Whether that’s already happened is unclear. “The native animal populations in Madagascar have not been monitored for disease long enough to know how they are impacted,” says Duke University veterinarian Julie Pomerantz, who points to toxoplasmosis as an example of a disease that can affect lemurs and fosa alike and may, quietly, be having a significant impact on these native mammals.

Aside from their potential as disease disseminators, the forest cats prey on native birds, rodents, and snakes, and compete with the fosa for the endemic lemurs. But their estimated date of arrival means that they’ve spent centuries living on and adapting to Madagascar, becoming part of the island’s ecosystem as it functions today.

“They occupy the forest edges really, really well,” says Dollar—a case of a non-native species snagging relatively new digs (areas disturbed by human development) that competitors haven’t occupied. And with so many centuries as co-residents, he says, “things may be relatively balanced.”

For wildlife managers, learning more about these forest cats can help them decide what, if anything, should be done about them. “It’s important to follow these cats and really study them,” says Sauther. “We need to get to know them before doing anything dramatic that changes the system.”

On that note, filling in details of the forest cats’ origins leads to a complex and big-picture question for conservationists: At what point is an invasive species considered part of the fabric of the environment it once established? Is 900-plus years long enough?

“It’s quite the conundrum,” says Dollar. “When is it no longer justifiable for managers to [interfere with invasive wildlife]?” Especially, he says, when Madagascar is weighted down by many “more acute” conservation problems, such as population growth, lack of infrastructure, and the devastating effects of traditional agricultural practices.

“Is this a case where we should focus our efforts elsewhere—where we should leave a thing alone and let nature take care of itself? I really don’t know the answer, but this will be quite a debate!”

Regardless of what decisions are made going forward, these findings “give us insight into how things from outside adapt and change an existing ecology,” says Sauther. “We know humans came into Madagascar and changed a lot—cutting forests, raising cattle, planting crops. There were waves of heavy human impacts. And these cats are part of that story.”

At least while the lions behave.
science

The evolutionary marvel mates in love trains, can swim in the ocean, and even uses jazz hands as a defensive tactic.
animals

From a flightless giant heavier than a polar bear to a super-glider with a 24-foot wingspan, avians ancient and modern compete for the crown.
animals

The cat-loving island nation is redefining its relationship with the 'elegant assassins.'
Video