For many retro-tech enthusiasts, pneumatic dispatch is the holy grail of awesome lost technologies—but we found a strikingly modern system at Stanford Hospital, delivering thousands of capsules daily. 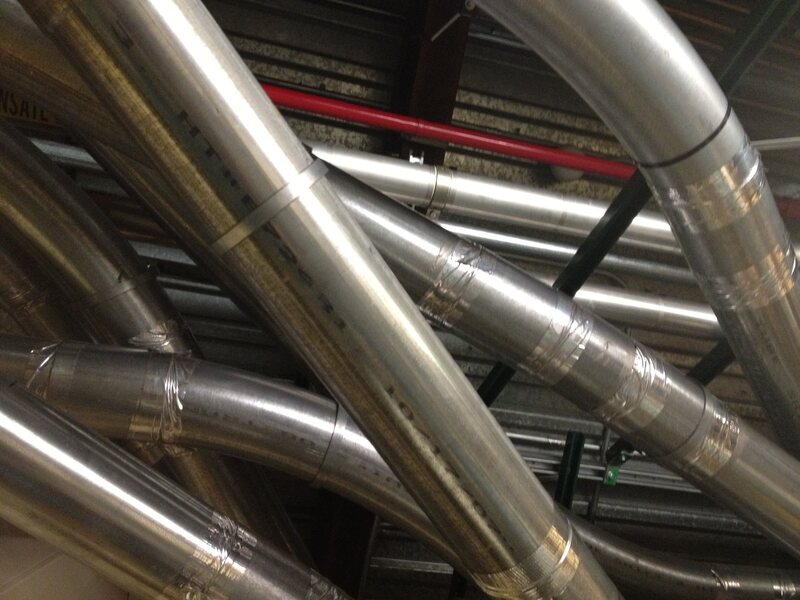 On January 26, 2013, Obscura Society San Francisco went to visit and find out more. Using air power to zip parcels and packages through complex systems of tubes, the once common technology of pneumatic tube systems has all but fallen into total obscurity. With the exception of a few surviving relics, like the pneumatic system used at the New York Public Library or the defunct (but hopefully to-be-restored) massive systems like the one that snakes under the city of Prague, all of the world’s great pneumatic systems have gone the way of wax cylinder recordings and steam power.

Although most of the world’s historic tube systems have disappeared and the technology has been mostly forgotten, there is a surprising exception: hospitals and administrative buildings. Massive tube systems run through these buildings, not as relics of a time gone by but as brand new, state of the art delivery systems, sending paperwork and specimens across vast properties, with just the barest whisper of a whoosh belying the presence of miles of tubes crawling out of sight in walls and ceilings, and basements and rooftops. 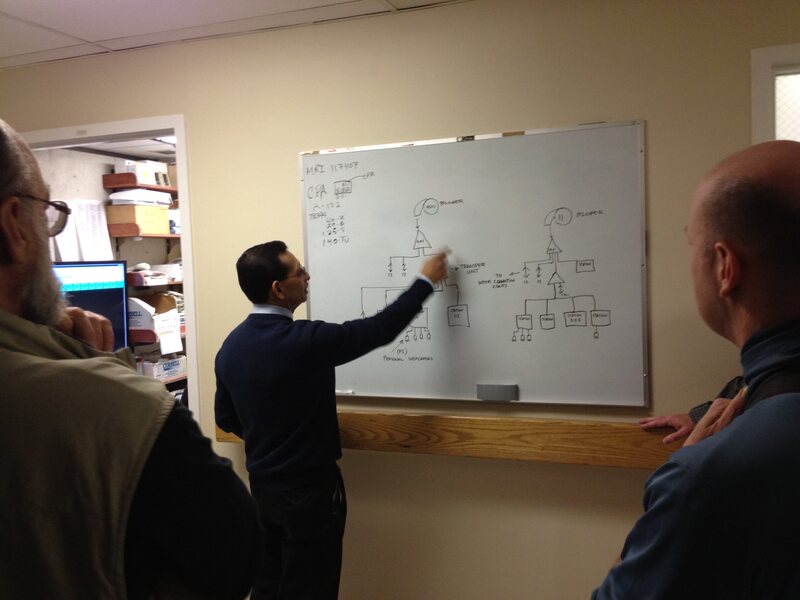 You know it’s going to be good when the tour starts with technical schematics. 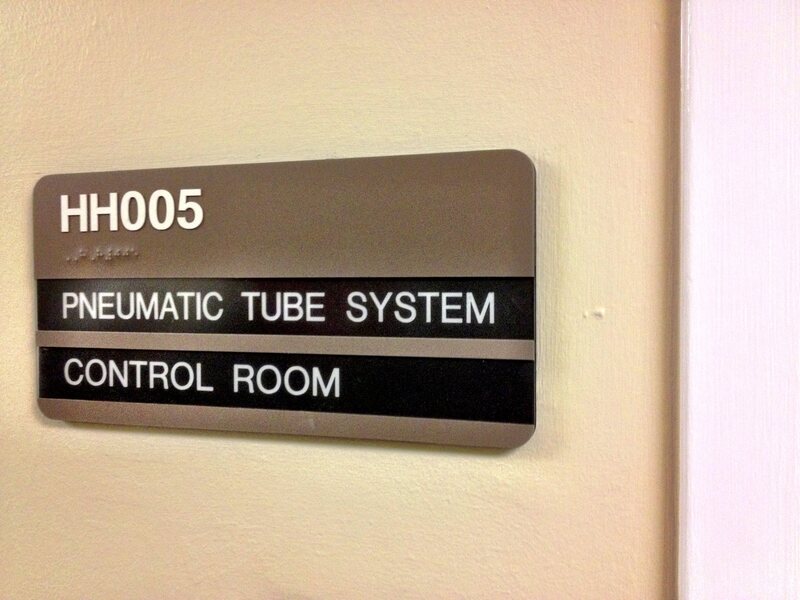 The second largest system of this kind in the United States is at Stanford Hospital, where we joined the engineering staff for a look at this remarkable retro-modern combination of low and high tech.

The pneumatic tube system at Stanford Hospital was installed in 1989, and began operating in the 1990s. Since then, it has been expanded greatly so that soon, with new construction under way, it will be the largest such system in the United States. Every day, sealed capsules powered by 40 blowers in 40 zones deliver thousands of packages through 4 1/2 miles of tube, hidden almost entirely out of sight. Annually it adds up to an estimated 2.2 million deliveries. 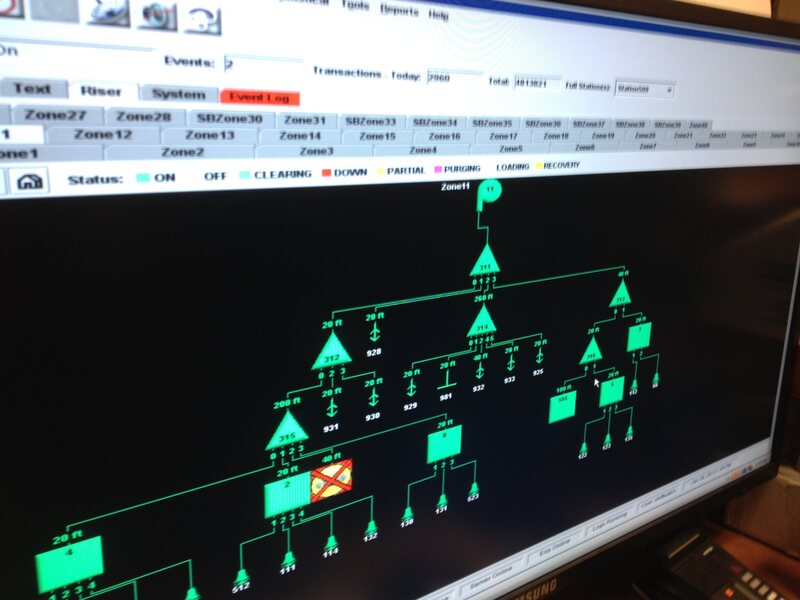 Individual RFID tags identify each one of the capsules as they pass through the system, monitored here in the control room by the engineering staff. 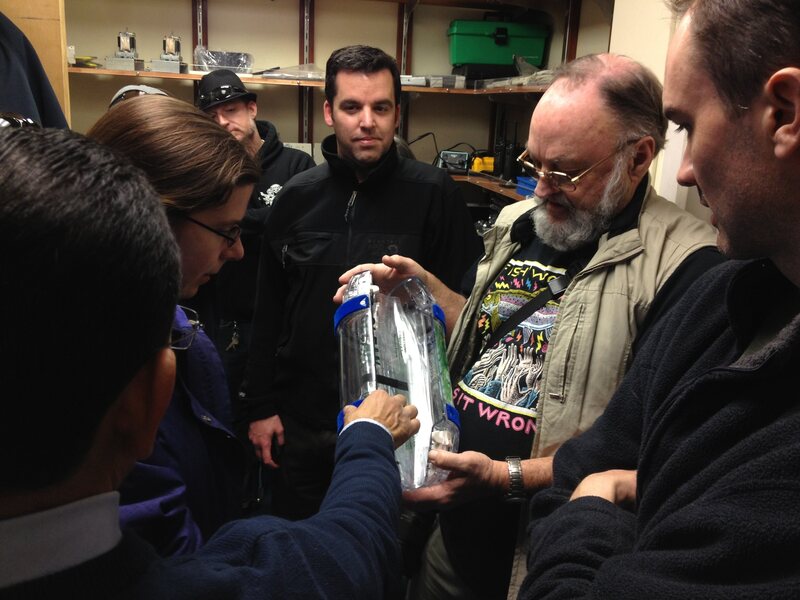 Three different color-coded capsules, created specifically for Stanford, identify the types of contents being sent through the system. 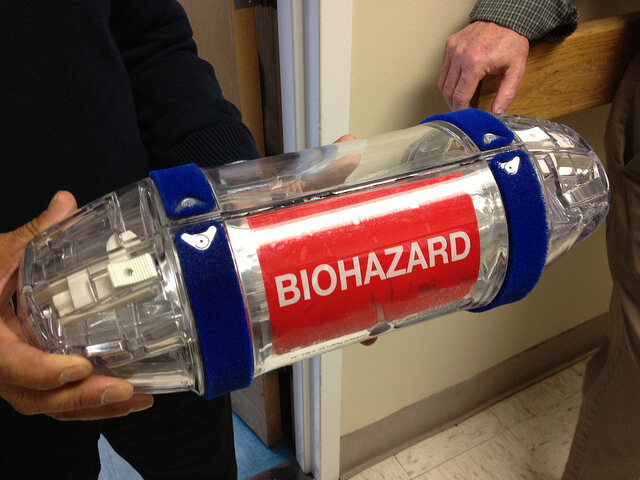 The red biohazard capsules are kept separate from capsules designated to hold clean specimens and tools or paperwork. 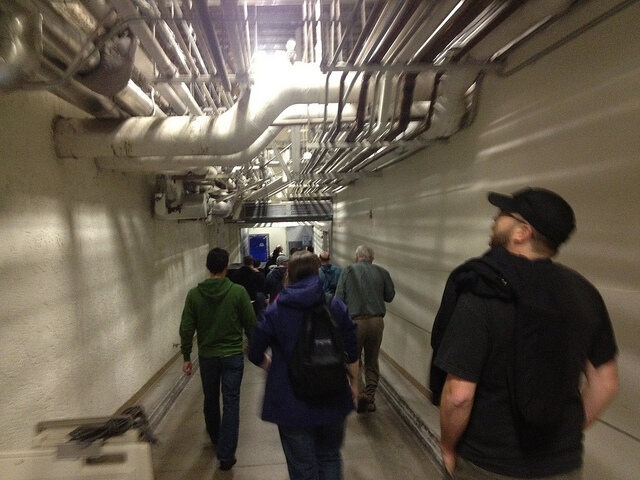 Into the depths of the hospital… 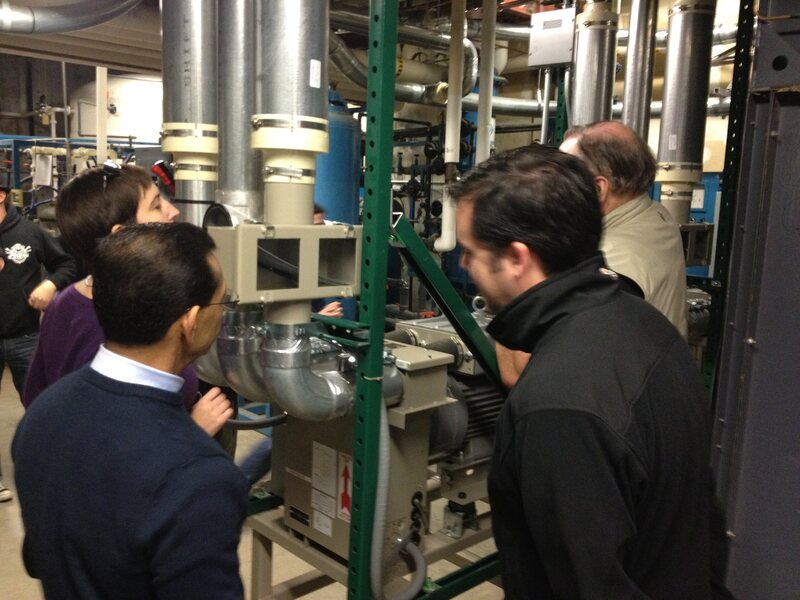 Earplugs in, we examined the blower systems that power the tubes. 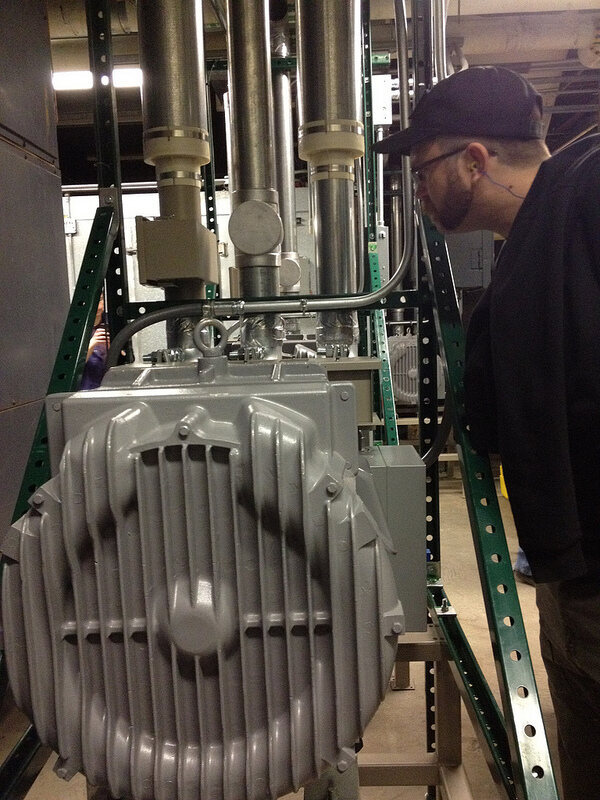 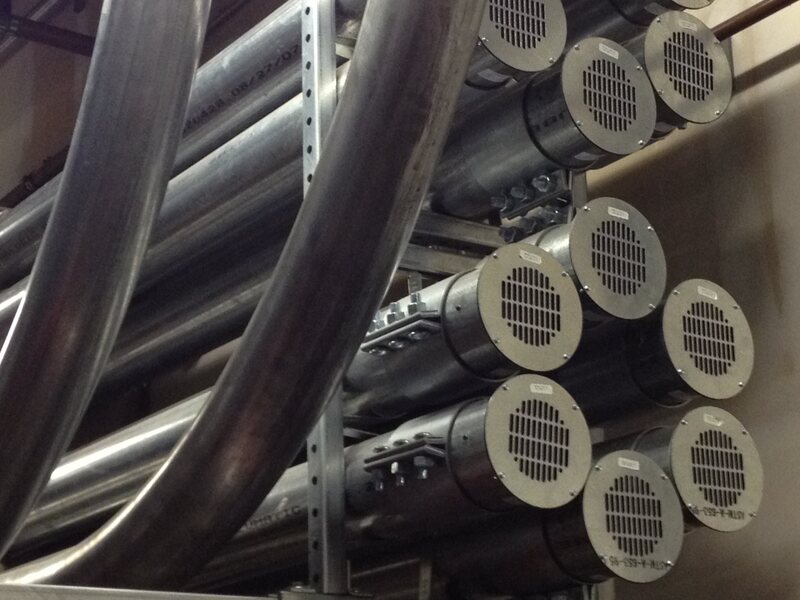 Deep in the far end of the basement, tubes finally reach their end point. 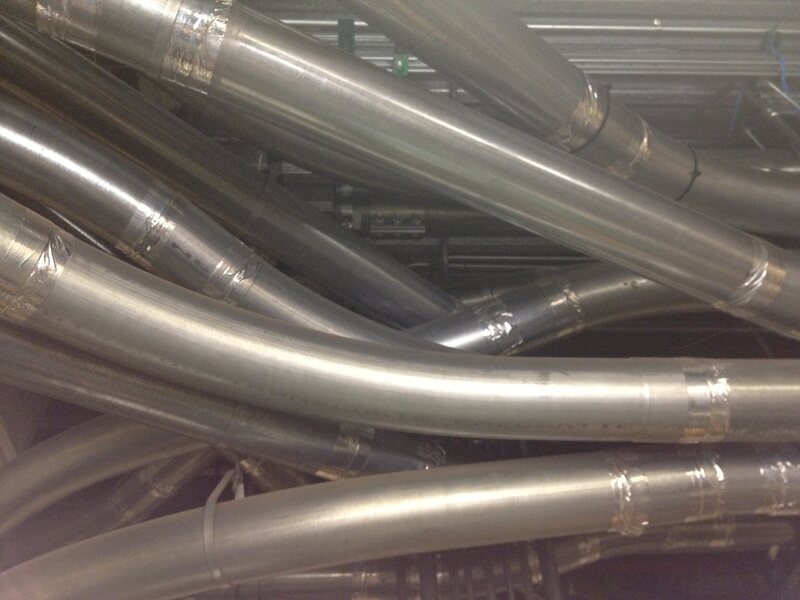 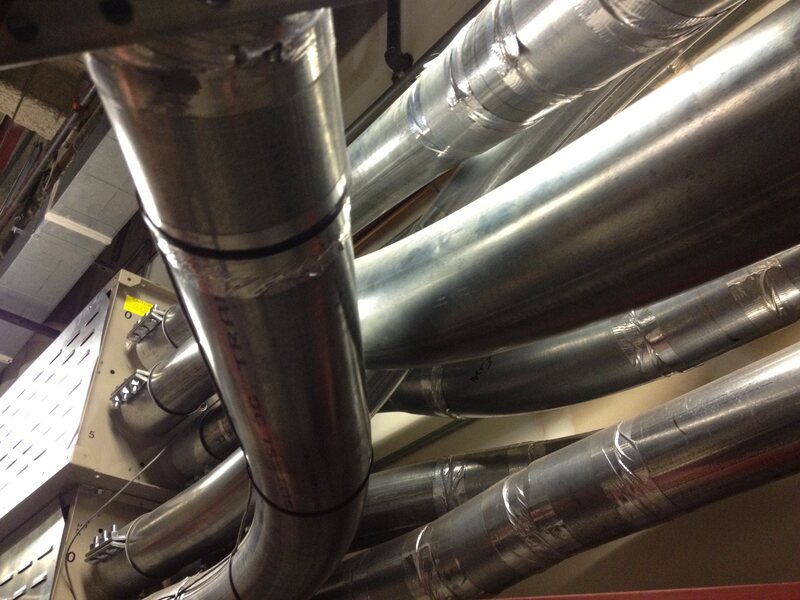 On the roof, masses of snaking of tubes come together.

The most remarkable thing about visiting the pneumatic system at Stanford is just how normal and common sense it seems. The system is quiet and efficient, and delivers thousands of vital items daily. It doesn’t seem bizarre that they have such an unusual system, but rather that more places do not.

Thank you to the Stanford Hospital Engineering staff who so graciously let us explore in, under, and over their domain.

DO IT YOURSELF:
The Stanford Hospital pneumatic system is only available for exploring by special advanced appointment. Join our San Francisco Bay Area mailing list to find out the next time we plan a visit.

Notes From The Field: In Search of the Green Fairy in New Orleans

It was the Tinder of the early 20th century.
pneumatic tubes