Some Ships Keep Sailing Even After They're Wrecked - Atlas Obscura
Want to see fewer ads? Become a Member. 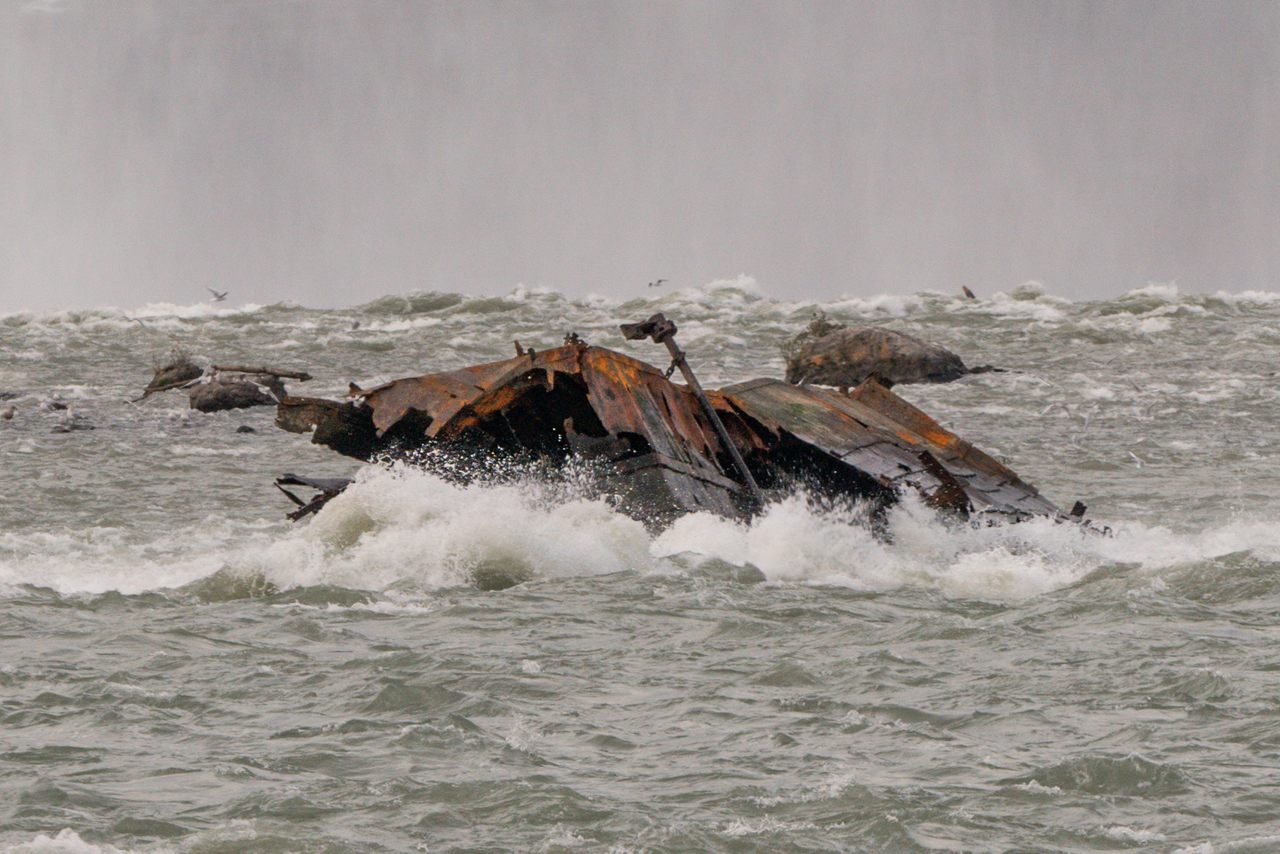 On the move again! Niagara Parks
In This Story
Destination Guide

For the past century, someone standing on the Canadian side of the upper Niagara River and looking out toward Gull Island—a little heap of rocks with a couple of scraggly trees and a few feathered residents—has been likely to spy a mangled mass of iron, partly submerged in the rapids. With a portion sticking up in the air, “it almost looked like was trying to fight its way upriver,” says Jim Hill, senior manager of heritage at the Niagara Parks Commission.

The wreck has languished there since August 1918, when a scow became untethered from the tugboat that was towing it and ran aground while drifting toward the falls. (Designed to be hauled, the hefty flat-bottomed sand barge lacked power and a rudder, leaving it rather helpless on its own.) The two crew members on board were rescued, but the scow had no such luck. Even if the boat could be salvaged for scrap, the potential payoff for individuals or companies wasn’t worth fighting the current to bring it ashore, especially with so much hydroelectric infrastructure nearby.

So, day in, day out, come storms and tumbling water, the 98-foot boat sat lodged in place—exactly where the crew had abandoned it.

Then suddenly, this past Halloween, it moved. Stimulated by a storm that felled trees, knocked out power, and deluged the already-brimming Lake Erie (whose waters sat at a record high last summer), the boat broke loose and went on a little trip downstream.

The trip was short and quick. The boat “appears to have sort of flipped on its side and spun around,” says Hill. Meaning when it moved, it moved on an angle—one side traveled 108 feet, the other 141 feet.

Or at least what’s left of it did. The boat has been steadily deteriorating over the years; a century in white-tipped water, barreling past at roughly 30 miles an hour, has done a number on it. “It was getting bombarded by rapids,” says Hill. “Much of it was already gone.”

The romantic vision of shipwrecks is one of peaceful, undisturbed slumber—artfully decaying vessels resting elegantly on a sandy bottom. In reality, shipwrecks are dynamic environments. “Every shipwreck is unique,” says Della Scott-Ireton, associate director of the Florida Public Archaeology Network in Pensacola.

Some wrecks are safer or more unstable than others, due to a number of factors. Many ships, for instance, fare pretty well in cold, fresh water, where there’s no salt to corrode their metal bodies. (Then again, even the shipwreck-studded Great Lakes have their share of problems: The aggregate weight of slews of zebra mussels—an invasive species—can overwhelm the ships and compromise their structural integrity.) Shipworms can make Swiss cheese of wooden hulls, Scott-Ireton says, while generations of oysters can colonize a ballast and cap it with their shells, creating a natural protective layer, as happened to a 16th-century Spanish ship in Pensacola Bay.

In any event, wrecked ships don’t tend to roam. “In most cases, once [wrecks] settle in place, they don’t often shift naturally,” Southerly says. But they can be nudged by salvage efforts or clean-up projects, and by fierce storms and floods. In 2005, Hurricane Dennis roared past Key Largo with enough force to right the USS Spiegel Grove, a deliberately sunk ship that was serving as an artificial reef but had rolled on its side. (When storms strike North Carolina’s Outer Banks, Southerly says, large fragments of wrecks can migrate up to two miles along the shore).

Scott-Ireton glimpsed the wrecked scow back in 2005, on a trip to Niagara Falls, and was struck by how precariously it was perched. “I was wondering when it was finally going to break loose,” she recalls, thinking, “‘Sooner or later, this thing is going to rust away to the point where a storm is going to push it over the falls.’”

Lodged amid the rocks, she says, the wreck had “no chance to get into the muddy bottom of the river and get covered by sediment, which is what would have protected it.” Had it been nestled down there, it “probably would have been fine and stayed there on and on.”

It’s hard to say how long the scow will stay in its new environs. Hill figures the scow could stay put for a while, because from a hydrodynamic standpoint, it has never looked worse. “It’s literally now a crumpled mass,” Hill says. The tie-off points, still intact on the hull, are now reaching into the riverbed, like accidental anchors.

But there’s no doubt that the boat will continue to disintegrate. After the scow’s little jaunt, the Parks Commission launched a drone to fly over it and take aerial images, which revealed big punctures and gashes in the hull. Chunks are missing, and water is pouring through. “Our best guess is it’s going to continue to break up,” says Hill, “and that [it] will be scattered in the rapids.”

Before debris reaches the brink of the falls, he adds, it will pass through other shallows, where it could find itself wedged. (Hill suspects that some of the pieces that have come off over the years are scattered there already.) “It’s anyone’s guess what its next move is gonna be,” Hill says. If portions of the boat do stay intact long enough to topple over the falls, he adds, he expects them to sink.

Whether it vanishes from view or plunges down the falls, the wreck won’t be around forever. But Hill points out that it’s pretty remarkable it’s survived this long. Another stranded ship—a wooden-hulled surplus Sunbeam, built as a World War I-era Navy patrol boat—had given up the ghost not long after it got stuck on a sandbar, and then a neighboring shoal, in 1923. The hull “disappeared in about 10 years,” Hill says,“and the metal left behind got swept away.”

The scow, on the other hand, “seems to be literally made of tougher stuff.” Lashed by the rapids, perched amid rocks, “it’s a mini miracle that this thing has held on.”

A Minefield of Purple Urchins Devastated Kelp Forests in California

The Dominican Republic's fifth Living Museum in the Sea has just opened.
shipwrecks

Without the training, equipment, and utter terror.
Video • PinDrop