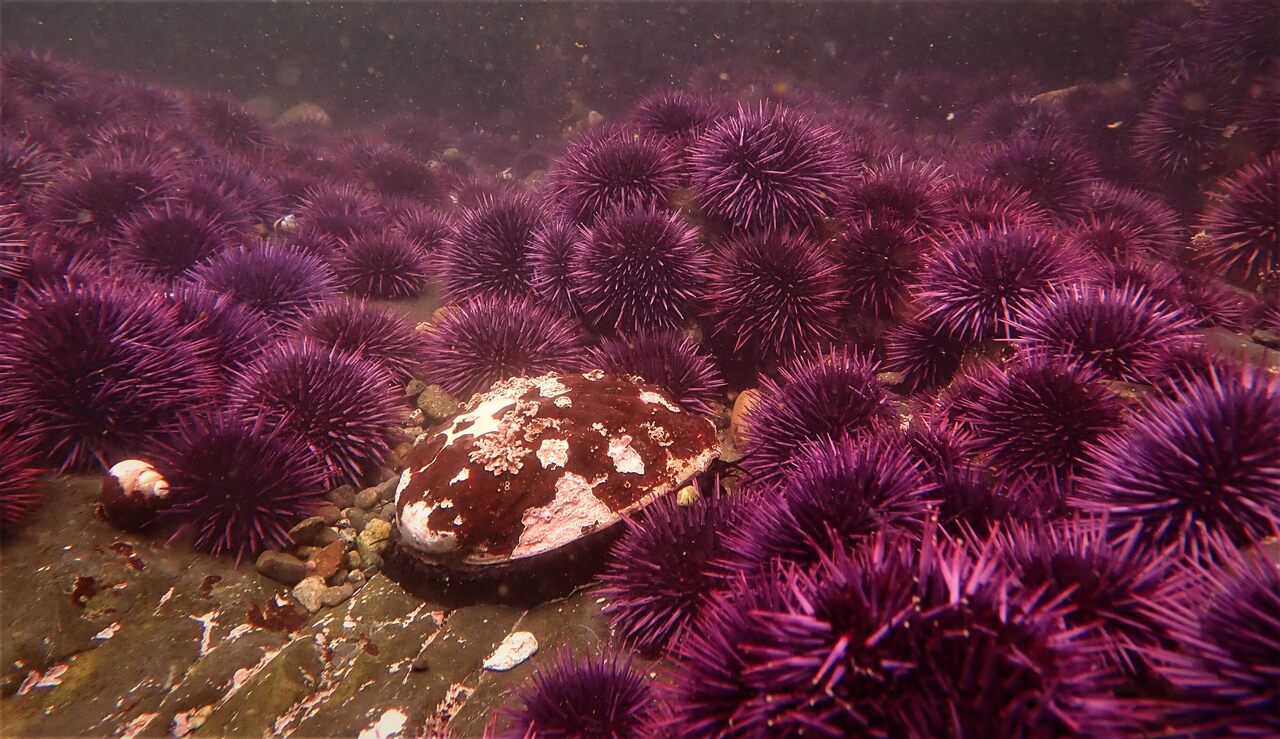 In 2013, California’s bull kelp forests began a vanishing act. First, the starfish blinked out, their tissue decaying in lesions until their arms fell off their bodies like petals. Next, the purple urchins multiplied in vast hordes like a glitch in the system, munching steadily on bull kelp until it had all but disappeared. All this time, the water kept warming, with temperatures hovering around 2.5 degrees Celsius above normal. Once the kelp was gone, the red abalone starved, leaving behind an underwater graveyard of upturned shells. But millions of urchins stuck around, carpeting the seafloor like violet-colored burrs.

For centuries, long stretches of northern California’s coastline supported sprawling forests of bull kelp. Fish, snails, and octopuses took shelter under the bull kelp’s blades, and a diverse population of mollusks and echinoderms held snug to the rocks. “You couldn’t even move without stepping on an abalone or red urchin,” says Francesca Koe, a dive instructor and free diver in the Greater Farallones National Marine Sanctuary, in reference to Gerstle Cove in Sonoma. “Now it’s empty of invertebrates, of kelp, of fish.”

Between 2013 and 2017, a perfect storm of factors resulted in the collapse of the northern California kelp forest and the animals that depended on it, according to a study published in October in Scientific Reports. Drawing on two decades of kelp ecosystem data, researchers found that 90 percent of bull kelp and 96 percent of red abalone disappeared from those coastal waters in a matter of years. “It’s as if all the redwood trees in California disappeared in two years,” Koe says. “This is the equivalent. It’s just that people don’t see it because it’s under the surface.”

When the oceans were healthy, Northern California’s coastal waters rivaled outer space in their abundance of stars—20 species, to be precise. Many sea stars prey on sea urchins, but the urchins’ primary predator was the massive sunflower star, which can grow up to three feet long. Sunflower stars were like oceanic roombas, gliding over the seafloor and grazing enough urchins to keep the population in check.

Scientists first noticed the coast’s sea stars were dying in the summer of 2013, according to Laura Rogers-Bennett, a co-author of the study and an environmental scientist at the University of California, Davis. The culprit was sea star wasting disease, which affects echinoderms and often appears in areas with unusually raised water temperatures. The viral disease causes skin ruptures that expose gonads, internal tissue, and finally their calcified skeletons. “It’s easy to recognize because the sea stars appear as if they’re melting away,” Rogers-Bennett says. “It’s really quite disturbing.” In the disease’s final stages, the lesions often grow so wide that the stars bodies fragment, arms coming loose from the center. From 2013 to 2014, the disease devastated the area. But while some populations have since begun to recover, no one has seen a sunflower star since 2015, suggesting the species has gone locally extinct.

In 2014, things got much worse when a marine heat wave known as “the Blob,” traveling south from the coast of British Columbia, reached California and mixed with warm El Niño waters, according to the study. For 226 days, the surface of the sea was 2.5 degrees Celsius warmer than usual, making waters nutrient poor and essentially unlivable for the kelp—and to top it off, an algal bloom released a neurotoxin that stranded many marine mammals.

In 2015, with few stars to prey on the purple urchins, the population of spiny critters exploded to 60 times their recorded population the previous year. Once appearing in small, dense patches, the urchins began to cover the barren ground like moss—but by this point, there was almost no food left. “Once they consumed all the fleshy algae and kelp, they started eating through the coralline algae, through woody stipes and tunicates,” Rogers-Bennett says. “They were eating through everything.” Some urchins that multiply in “barrens” have been known to survive without food for up to 50 years, according to a 2009 study in Tasmania.

As the urchins ate all the available food, they doomed nearby red abalone. At its peak, the abalone fishery attracted more than 31,000 visitors per year and fed $44 million into the surrounding coastal communities. But after the urchin boom, divers saw abalone inching up kelp stalks in search of fronds that were no longer there. “They’re strict herbivores and are susceptible to starvation within 18 months,” Rogers-Bennett says. Normally, abalone cling forcefully to rocks. “But they got smaller and weaker, to the point where you could just use your hand to pull one off,” Koe says. With nothing left to catch, the fishery shuttered in 2018.

Now, California’s coastal waters belong to legions of purple urchins—but they are far from thriving. The urchins survive on next to no food, their bodies shrunken and gonads empty. “The purple urchins aren’t evil creatures, but we created the environment that allowed them to flourish,” Koe says. “We shouldn’t forget that.” While the urchins are not invasive, their supersaturated presence is alarming. If any bull kelp spores were to latch on rocks, the seedlings would be immediately devoured by hungry urchins.

The bull kelp is unlikely to come back without help, especially given the likelihood of future marine heatwaves linked to climate change. And so in June, the California Department of Fish and Wildlife joined a nonprofit, the Greater Farallones Association, in releasing the Sonoma-Mendocino Bull Kelp Recovery Plan. The plan details a number of strategies to try and revive the forests, including seed banks, commercial ranching, and community outreach, and includes input from research groups, commercial divers, and local Native American tribes that have historically harvested the urchins and abalone for sustenance.

For the past several years, recreational divers affiliated with several conservation groups have been diving and removing the urchins, one by one. One group, the Watermen’s Alliance, removed 1.2 million purple urchins in 2018 and sent them to be composted in Utah, according to KCET. Of course, removing every purple urchin is impossible. Instead, the scientists want to clear strategic pockets of urchins to allow bull kelp the chance to come back in patches. “The strategy is to create this network of coves and oases up and down the coast,” Rogers-Bennett says, adding that these pockets could also serve as seed banks for the future.

For some Californians, the delicate balance between kelp, abalone, and urchins is nothing new. Bob Bertelli, the vice president of the California Sea Urchin Commission, which represents the state’s nearly 300 licensed urchin divers, started harvesting from these waters in 1975. He collected abalone at Killer Point by Half Moon Bay, but when the fishery closed each August, he’d switch to red sea urchins. They grew in such abundance that divers used rakes to detach them from the rock. “It was pretty much virgin territory back then,” Bertelli says. “You could anchor your boat pretty much anywhere in the kelp bed, swim down there, and pick 500 pounds in just a few minutes.”

Red sea urchins, which are bigger and spikier than their purple cousins, are a delicacy: Their gonads are served as uni in sushi. But the red sea urchin fishery collapsed alongside the surge of purple urchins, which outcompeted the reds for kelp. Now, when urchin divers spot a lone red and bring it to the surface, they find shriveled gonads that would never make it on a plate, Bertelli says.

Still, Roger-Bennett sees California’s purple plague as an opportunity. Like red urchins, smaller purple urchins can be harvested as food. “If you bring a purple urchin to market that’s empty, you can’t sell it as a seafood product,” she says. “But you can if you feed it for a short amount of time.” She likens the strategy to Florida’s marketing of the invasive lionfish as a seafood product. “This is going one step above sustainable. It’s a restorative seafood product,” she says.

From his years of experience as an urchin diver, Bertelli isn’t convinced that such an approach would be economically or physically viable. First off, he says, the urchins available for harvest are just too small, around the size of a silver dollar, making them hard to extricate. To get around this, the retired commercial urchin diver Jon Holcomb developed an urchin-sucking airlift, which sucks any animals and small objects in the nearby sand up a pipe and into a waiting net. The process is efficient, cleaning around 1,500 square feet of purple urchins a day, and far less backbreaking than plucking the critters by hand. But the technique is incredibly invasive, sucking up any living thing that happens to be loitering by the airlift. “You can try and put the critters back,” he says. “But who knows if they made it up the tube.”

Even if the researchers were able to establish a market for purple urchin uni, Bertelli doubts demand would grow high enough to extricate the needed amount of urchins from the kelp beds. “And the ocean is so dynamic that all this could change in a few years.” Instead, Bertelli advocates for the simplest, most time-tested method of urchin removal. “You take those purples and you crush them,” he says. All divers need is a rock hammer, armed with a spike on one end and a hammer face on the other, and the tiny urchins are easy to crack. (They can also serve as Christmas decorations.)

Still, to see if urchin ranching could become a reality, the Bodega Marine Laboratory at UC Davis has partnered with Urchinomics, a Bay Area shellfish company. Together, they’ve started an experimental urchin ranch. They collect purple urchins from the seafloor and fatten them up with pellets made from cuttings of the Japanese kelp kombu, according to the San Francisco Chronicle. So far, the project seems promising. The withered urchins take around six weeks to reach market size, and produce reliable roe with a sweet, umami flavor, Brian Takeda, the CEO of Urchinomics, told The Chronicle. If all goes well, the company plans to build a facility in downtown Bodega Bay, hire more divers, and eventually churn out 100 tons of purple urchin per year.

Since the California kelp collapse, Koe says she’s seen some patches of bull kelp take root in clearings off the coast of Marin County. But nothing comes close to the forests that were once so thick and tangled that divers would carry knives to cut themselves free of the kelp. Bull kelp’s natural life cycle includes fallow periods: The species naturally dies off and regrows each year. “This whole thing has shifted beyond cyclical,” Koe says. “It’s an unfortunate new world order.”

Welcome to the Great Atlantic Sargassum Belt, the Seaweed Superhighway

Researchers suspect that the smelly macroalgae will keep piling up on ocean shores.
turtles

Turtles Have Led Us to Their Secret Seagrass Meadows

The Lasting Magic of Drift Bottles

A man in France found a message-in-a-bottle from a student in North Carolina, and everybody loves it.
disasters

Sikhs statewide have organized to feed their fellow Californians in crisis.
Video