In Little Cayman, Things Are Looking Up for the Enormous, Friendly Nassau Grouper - Atlas Obscura
Want to see fewer ads? Become a Member. 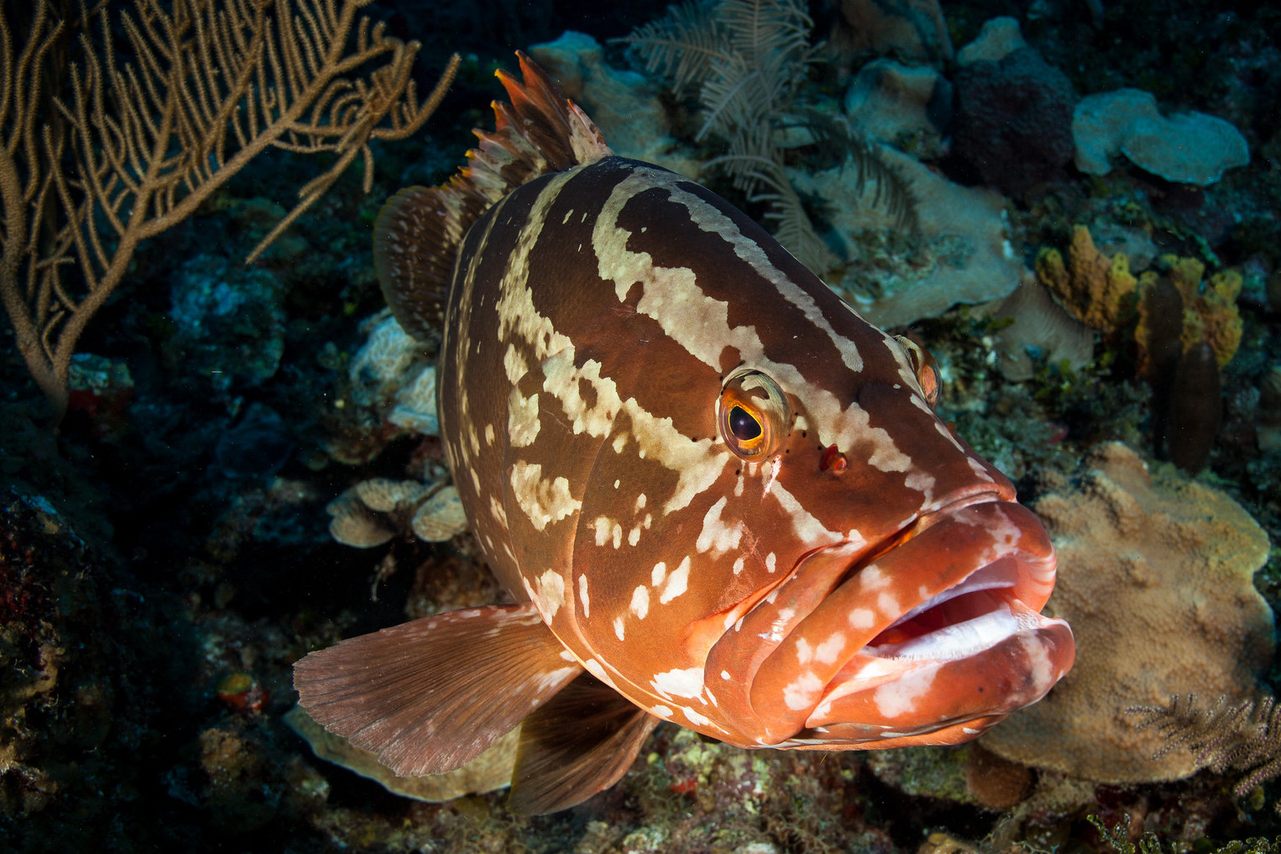 A Nassau grouper off the coast of Cuba. q phia/CC by 2.0 (cropped from the original)
In This Story
Destination Guide

By any account, the Nassau grouper is intimidating. The fish can grow as long as a yard and weigh up to 55 pounds. They feed by opening their thick, grumpy lips and inhaling helpless prey. Any unsuspecting diver or greenhorn marine biologist would be wise to be wary, if it weren’t for the groupers’ fatal flaw. “They’re kind of like puppy dogs,” says Brice Semmens, an ecologist at the Scripps Institution of Oceanography at the University of California, San Diego. “They’ll swim right up to you and you can pet them.” And if you don’t, the fish, like any wheedling dog, will find a way to make you. “They’ll tuck themselves under your arm when you’re trying to set up cameras for scientific purposes,” Semmens says. “You literally have to swat them away.”

Inconvenience aside, Semmens feels grateful whenever he’s prodded by the attention-seeking fish. The Nassau grouper is critically endangered, having almost disappeared from their home waters in the Caribbean over the past few decades due to overfishing. All Nassau grouper populations have dropped by more than 60 percent since 1980, according to the International Union for Conservation of Nature (IUCN). It’s almost like the fish are swimming up to fishermen and begging to be caught—and in a way, they have been. But from 2003 to 2015, the population of Nassau groupers living around Little Cayman Island has more than tripled, thanks to a conservation collaboration between researchers, conservation organizations, and the Cayman Islands government, according to a new study in Proceedings of the National Academy of Sciences.

When the grouper was abundant in the Caribbean, their annual breeding aggregations were dizzying in scale. The large fish are territorial, but each year, right after the full moon in early winter, they gather in huge numbers to breed. In 1971, researchers estimated one crowd by Cat Cay in the Bahamas contained anywhere from 30,000 to 100,000 individuals. In 1975, Jacques Cousteau captured a massive Nassau grouper spawning event in Belize. But in the 1980s, the groupers became harder and harder to find, and local fishermen went to the Cayman Islands government seeking answers, writes Croy McCoy, a research officer in the government who coauthored the paper, in an email. By the 1990s, the fishery had collapsed across all three Cayman Islands.

When Nassau groupers gather to breed, the fish hang out, in eerie suspension, until the sun begins to set, Semmens says. As soon as the light begins to fade, the females begin to dart upward and release a burst of eggs, clear orbs the size of pinheads. The males, catching on, then rush to spurt a splash of sperm in the water. “Once the spawning starts, after 10 minutes or so, the visibility at that aggregation site can drop to zero,” Waterhouse says, quickly clarifying, “because there’s so much sperm in the water.” Grouper sperm, released in enormously optimistic plumes, turns the water so cloudy that researchers can barely make out their hands, let alone how many groupers are around them.

The fish, which can live up to 20 years, return to the exact same sites every year to breed. Once fishermen keyed in on these places and the right time to be there, it was a simple matter of returning each year to pick off the would-be lovers. In 2001, fishermen stumbled upon an aggregation off Little Cayman of approximately 7,000 fish. “They had just a couple of boats and line-fishing, but they managed to take out more than half the population,” Semmens says. Even as their populations dropped, the groupers kept returning to their old breeding spots. And with fewer fish, they began linger longer. “It’s a jeopardy problem,” Semmens says. “It offered more and more access to the few remaining fish at the site.”

When McCoy worked as a divemaster at a site called Three Fathom Wall off Little Cayman in the 1980s, he regularly saw one Nassau grouper with distinct markings. “This fish knew me like a dog knows his master,” McCoy says. “He followed me around until I would cuddle him gently and stroke his head.” McCoy left to earn his PhD at Bangor University in Wales, but when he returned in 2000, it was like not a day had passed. “When I got into the water, he would somehow recognize me after all those years and leave the aggregation,” McCoy says. “He’d still come to me looking for his hug.” McCoy stopped seeing the fish over the next few years, and he suspects it was among the unlucky ones caught in the 2001 raid.

After the government learned of the devastating 2001 fishing expedition, it realized the need for action. The Grouper Moon Project, a collaboration between the government, the citizen science group Reef Environmental Education Foundation (REEF), Scripps Oceanography, and Oregon State University, was born. REEF started sending teams to the western tip of Little Cayman to monitor the spawnings. In 2003, the government closed off large sections of the grouper’s habitat from wintertime fishing. In 2016, Little Cayman introduced size and catch limits and broadened the fishing ban to a seasonal closure, from December through April. The researchers believe this swift, varied conservation plan is the reason behind the grouper’s recent rebound there.

But the results weren’t visible overnight. Groupers live a long time and don’t reach sexual maturity until four to seven years of age, according to Lynn Waterhouse, lead author of the study and a research biologist at Chicago’s John G. Shedd Aquarium. The researchers saw almost no change for years, but now the population off Little Cayman has reached the same estimated size as the population discovered in 2001. It took 15 years.

Grouper Moon continues to keep a watchful eye over the population, using tags and, eventually they hope, an image recognition algorithm that can recognize their distinctive patterns. The researchers hope their methods can inform species conservation at other sites. Grouper Moon has also developed a curriculum to be taught at schools in the Cayman Islands. “They are the ones who will replace me and others and our plight to see this particular species thrive on Cayman reefs,” McCoy says.

Though Grouper Moon represents a collaboration with researchers from around the world, McCoy recognizes that the project started within the Cayman Islands community, way back in the 1980s. “I would like to [give a] heartfelt thanks to the local fishermen who gave up a deep-rooted tradition to make this all happen,” he says, adding that now, during open season, he often gets grateful calls from fishers who boast of catching a Nassau grouper from the shoreline. “I do hope that I can see in my lifetime the larger island of Grand Cayman follow suit,” he says. “That jury is out.”

Critically endangered, and a much-sought delicacy, the animals are imperiled at every turn.
food

Tristan da Cunha was first inhabited to keep an eye on Napoleon; now residents are looking out for lobsters.
food

Gyotaku was once a way to brag about the size of your catch.
Video