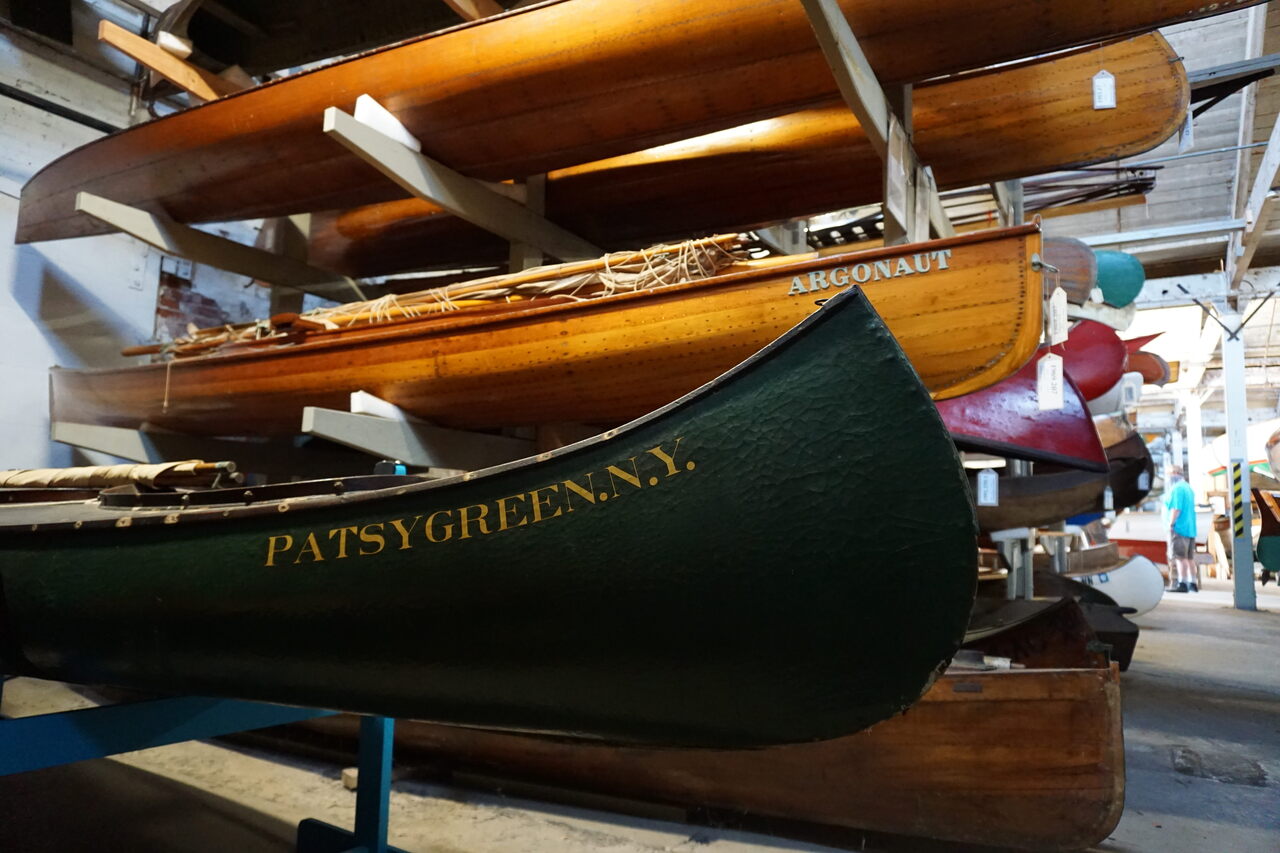 The Patsy Green was built around 1906. A married couple, Henry A. Wise Wood and Elizabeth Ogden, once paddled and sailed the canoe from New York City to Prince Edward Island, Canada. John Boudreau
In This Story
Place

In an old velvet mill in the picturesque New England town of Mystic, Connecticut, there’s an unassuming door marked “Brooms.” But instead of a dusty collection of mops and buckets, anyone who opens that door will find hundreds and hundreds of boats, from ancient canoes to postwar motorboats. Together, they make up part of Mystic Seaport Museum’s historic watercraft collection, one of the largest in the United States.

Because of its location on a sheltered estuary with easy access to the Atlantic Ocean, the Mystic area has always been ideal for boatbuilding. The Pequot people likely built mushoons, or dugout canoes, in the area until English settlers and Native allies destroyed their community in the Mystic Massacre of 1637. Colonists continued to build boats in the area, and shipyards lined both banks of the Mystic River throughout the 18th and 19th centuries. In 1929, Mystic Seaport Museum was founded on the site of the old Greenman Brothers shipyard. As the museum grew, a portion of the historic watercraft collection moved across the street into the old Rossie Velvet Mill. (Production of velvet had boomed as shipbuilding declined.) As the museum modified the building to fit its needs, what started as an actual broom closet became at first a miniscule office and then a modest portal to a much larger storage room.

The watercraft storage area is still sometimes referred to as the “broom closet,” which is what I first heard it called when I worked in the museum’s education department from 2014 to 2017. Neither museum guests nor staff are usually allowed to visit, so I couldn’t understand why people were so excited about brooms until I saw it for myself. The museum’s best-kept secret may soon be its biggest draw: The museum plans to open a portion of the storage area as a permanent exhibit space.

Atlas Obscura recently spoke with Quentin Sneidker, the museum’s senior curator of watercraft, to learn more about the secrets of the boat-filled broom closet.

We don’t view it as much different from preserving fine art. The artifacts we preserve just happen to be a bit bigger than most. Just like with other artifacts, environmental stabilization is a big consideration—we do our best to keep the vessels stable, and the renovated space is going to help with that. The Rossie Mill’s historic construction has actually been surprisingly good for preservation. The building has a big, thick concrete floor, which retains heat in the winter and keeps cool in the summer. That means the vessels aren’t subject to rapid temperature and humidity swings.

Some boats look almost brand new, while others look fragile. How do you evaluate if a boat should be repaired, restored, or left as-is?

If a vessel comes to us and its coatings show its use history—wear patterns, repairs, modifications—we keep that intact as much as possible. If a boat has simply been neglected, but doesn’t show interesting wear patterns, there might be a way to stabilize the vessel so it’s structurally sound but not necessarily seaworthy. We’ve recognized that we’re trying to present vessels in a way that will appeal to a layperson. If we leave a boat in sort of an unkept state, rather than presented as it was meant to be, it might not resonate as much.

What’s been your focus as a curator?

I’ve made it my focus to point out the significance of fiberglass. Often, the way we can get people interested in history isn’t with something that happened hundreds of years ago. What connects people is a more recent past. There’s always been a bit of an unspoken reticence to collecting fiberglass, because it wasn’t seen to be vintage. But as time marches on, these vessels are going to be important to future understanding. I want to try to be objective and view all vessels as historic, regardless of material.

What’s the most meaningful piece in the collection for you?

I helped acquire a boat from 1947 called a BB Swan, which was made by the Beetle Boat Company. Swan is the model name. It really illustrates this uninterrupted link between deep history and the more recent past. The Beetle family has built whaleboats and recreational sailboats in Massachusetts since the mid-19th century. After World War II, Carl Beetle recognized the importance of fiberglass as the material of the future.

Another boat we had in recently is a duck-hunting boat called a Madoc skiff, which was designed by L. Francis Herreshoff, the son of a famous yacht designer and a well-known designer in his own right. L. Francis famously dismissed fiberglass as “frozen snot,” but the Madoc skiff is fiberglass. So as derogatory as he was towards the medium, he still designed boats in it.

What attracted you to historic boats and watercraft in the first place?

Growing up, my father always had a wooden boat around. I sailed on and captained several different vessels until the late ’80s. Around the same time, a position in vessel maintenance opened up at the museum, so I took that opportunity. I was named curator in 2017, and I feel really privileged to hold this position. To be honored with the title of Clark Senior Curator of Watercraft is a fulfillment of a career trajectory. I really enjoy coming in every day and working with our fantastic group of volunteers.

For those who do get to see the so-called broom closet, what are they most excited about?

Vireo was Franklin Delano Roosevelt’s yacht. Apparently, on this boat, while on vacation in Canada, he contracted polio. After that, the boat was never used again. Eventually, in the mid-’50s, it was donated to the museum. In the mid-’90s, we had a longtime trustee and interim president of the museum who asked to forgo a salary so that we could clean and stabilize Vireo and put it on display. So it’s still in great shape.

There’s also a small skiff from a completely anonymous builder, probably in New England, that captivates anyone who sees it. Its lines are so sweet and its construction is so fine and meticulous, but we know little to nothing about it. It’s really a testament to the anonymous builder—you expect extraordinary craftsmanship from big-name builders like the Herreshoff family, but it’s inspiring to see that this level of craftsmanship was once ubiquitous.

Without this collection, what stories don’t get told?

The main story is that old song: Form follows function. Especially with wooden boats. Each locale would develop a boat specific to its conditions, which is why you can immediately tell a Chesapeake Bay boat from a New England boat. These variations happen even on a microscale: There’s different boat designs in Buzzards Bay, Massachusetts, and Woods Hole, Massachusetts. Absent the broad collection of vessels that we have, you’d lose that story.

Most of these things were utilitarian objects—not meant to last more than about seven to 10 years. Because they were seen as generic, no one really took time to document them. And so the surviving examples are key to the story of maritime American ingenuity and craftsmanship.

“Every one of these animals has a story."
sailors

From war to exploration to pleasure cruising, pets have often accompanied us on the oceans.
anatomy museums

The Canadian Team on the Hunt for Radioactive Artifacts

Historic objects made with dangerous elements are lurking in museum collections.
Video