What Is Killing Albatross Chicks in the Falkland Islands? - Atlas Obscura
Want to see fewer ads? Become a Member. 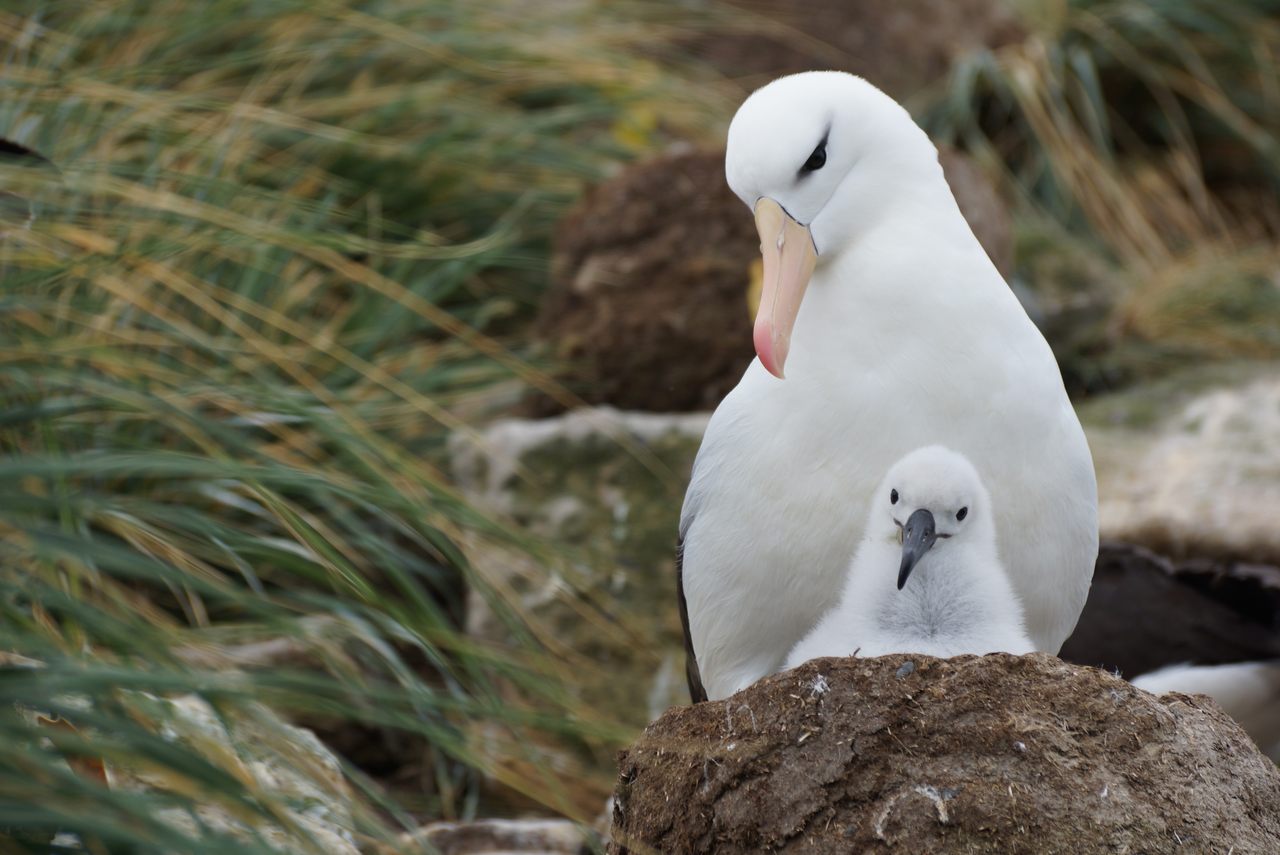 Few humans live in the Falkland Islands, an archipelago in the Atlantic Ocean off the southern coast of Argentina. But there is a lot of wildlife, especially seabirds, including the largest breeding population of black-browed albatrosses in the world.

Considered endangered as recently as 2013, the numbers of these big migrators have since rebounded, and the species is currently listed under the lowest level of threat by the International Union for Conservation of Nature. These days, around 500,000 pairs attempt to breed in the Falklands each year. By December, dark-spotted eggs—one per nest—begin hatching into fluffy, gray chicks. Lately, a mysterious illness has been claiming the lives of those chicks, causing concern among the researchers who study them.

On the west side of the archipelago—a British overseas territory, also claimed by Argentina and the subject of a brief, decisive war in 1982—is New Island. This elongated patch of dense tussac grass with dramatic cliffs on one side and gently sloping beaches on other was historically used as a base for whaling. It was established as a nature reserve in 1972.

A small settlement sits on the east side of New Island, a short walk from a research reserve. That’s where Fernando Ventura, a doctoral student at the University of Lisbon in Portugal, was living in 2019 and 2020 when he started monitoring black-browed albatross nests to learn more about the population.

He spent his days from October to January out in the field with the colonies, enduring chilly, wet, extremely windy island weather. He monitored 260 nests daily, keeping track of the nest owners and recording when each egg hatched and how the chicks progressed.

He soon made a grim observation. “I began noticing the chicks were dying for apparently no reason,” he says, “and I got really upset.”

Again and again, he saw the same symptoms: discharge seeping from their eyes, swollen tissue around their beaks, and difficulty lifting their heads. He learned that by the time a chick displayed these symptoms, it only had a few days left to live.

Ventura brought up the chick mortalities with his doctoral advisor, Paulo Catry, who had been visiting New Island for research since 2003. He confirmed that he had seen the same thing before, and the pair, along with two of their colleagues, decided to investigate. The symptoms didn’t appear to match any known albatross disease, but as they dug deeper, they found a possible match to sporadic “virus-like infections” affecting black-browed albatrosses in the Falklands that had been described as far back as 1975.

The researchers then pored through their own records on chick survival during six breeding seasons between 2004 to 2020 on New Island and three other nearby islands with large albatross populations: Steeple Jason, Beauchene, and Bird. Under normal circumstances, 30 percent of chicks die on average per year of natural causes, including predation. The new analysis, published in 2021 in the journal Polar Biology, revealed that between 3 percent and 40 percent of the population’s chicks were dying in their nests in any given year for reasons other than predators.

The biggest killer of adult black-browed albatrosses is long-line fishing boats, which can snag and drown foraging birds out at sea, often dooming the parentless chicks as well. Birds of prey, such as the striated caracara, also snatch chicks from their nests. And then there’s disease.

Mapping out the locations of the nests in which they discovered dead chicks gave the researchers another big clue—alongside the shared symptoms and old reports—that they were dealing with a contagious disease.

Amandine Gamble, a disease ecologist at the University of California, Los Angeles, who wasn’t involved in the study, says, “I think the spatial structuring [of chick mortalities] is very strong support for an infectious disease,” because other causes of death—predation, for example—wouldn’t produce such a pattern. But “without finding the infection itself, it’s hard to tell for sure.”

Identifying the infection is easier said than done. New Island is a remote place. To get there, researchers rely on tiny planes (the size of Fiat 500s, Ventura says) that can only make the trip when the wind is just right, due to the island’s extremely short landing strip. That means that getting significant research equipment to the island, such as an ultracold freezer that can preserve samples, is challenging.

But isolating the culprit is a worthy endeavor, according to Ralph Vanstreels, a wildlife health expert at the Institute of Research and Rehabilitation of Marine Animals in Brazil, who also wasn’t involved in the study. It could help researchers prevent the spread, or at least predict how it will impact black-browed albatrosses in the Falklands and elsewhere. “It is essential to employ diagnostic tools to investigate what is happening,” he says.

Maria Dias, the marine science coordinator at BirdLife International in the United Kingdom, agrees, stressing the need to identify any disease killing albatrosses, which as a whole, she notes, are “one of the most threatened groups of animals in the world.”

With many unknowns related to the disease, Ventura is still confident that humans aren’t the disease vector. He reasons that the study found chicks on New Island—which is frequented by tourists and researchers—were dying at a similar rate to those on the more deserted islands, such as Bird and Beauchene.

For that reason, Gamble sees this research as a rare opportunity. “More and more studies are being done in Antarctica trying to detect viruses and parasites to see if we are introducing anything, but the thing is we don’t know what was there before.” The baseline data from this research, she says, could be a crucial point of comparison 10 years from now.

Ventura notes that albatrosses face far bigger threats than this unknown pathogen. In fact, it’s not even the worst contagious disease they can get. Outbreaks of avian cholera, for instance, have more severely impacted the population of closely related Indian yellow-nosed albatrosses on Amsterdam Island in the most remote southern reaches of the Indian Ocean.

Fortunately, black-browed albatrosses aren’t in dire straits; at present they hold the title for the least-threatened albatross species. And despite the appearance of this mysterious chick-killing disease year after year, the Falkland Islands population is still thriving, according to Ventura. That may be down to the long lives of the adults, which can live into their 60s and can usually continue to produce more offspring for many years losing a chick.

“There are some bumps on the road,” he says of the long-term recovery of the species, “but overall, the story is a happy one.”

As birds go, these Australian animals are unusual in many ways, including how they divvy up parenting duties.
islands

The bean-sized snail has persevered despite hundreds of related species going extinct in recent decades.
islands

Just 10 men are permitted to hunt and pickle 2,000 young seabirds on a desolate island each year.
Video • Object of Intrigue