Emu Dads Raise the Young—Which May Not Even Be Their Offspring - Atlas Obscura
Want to see fewer ads? Become a Member. 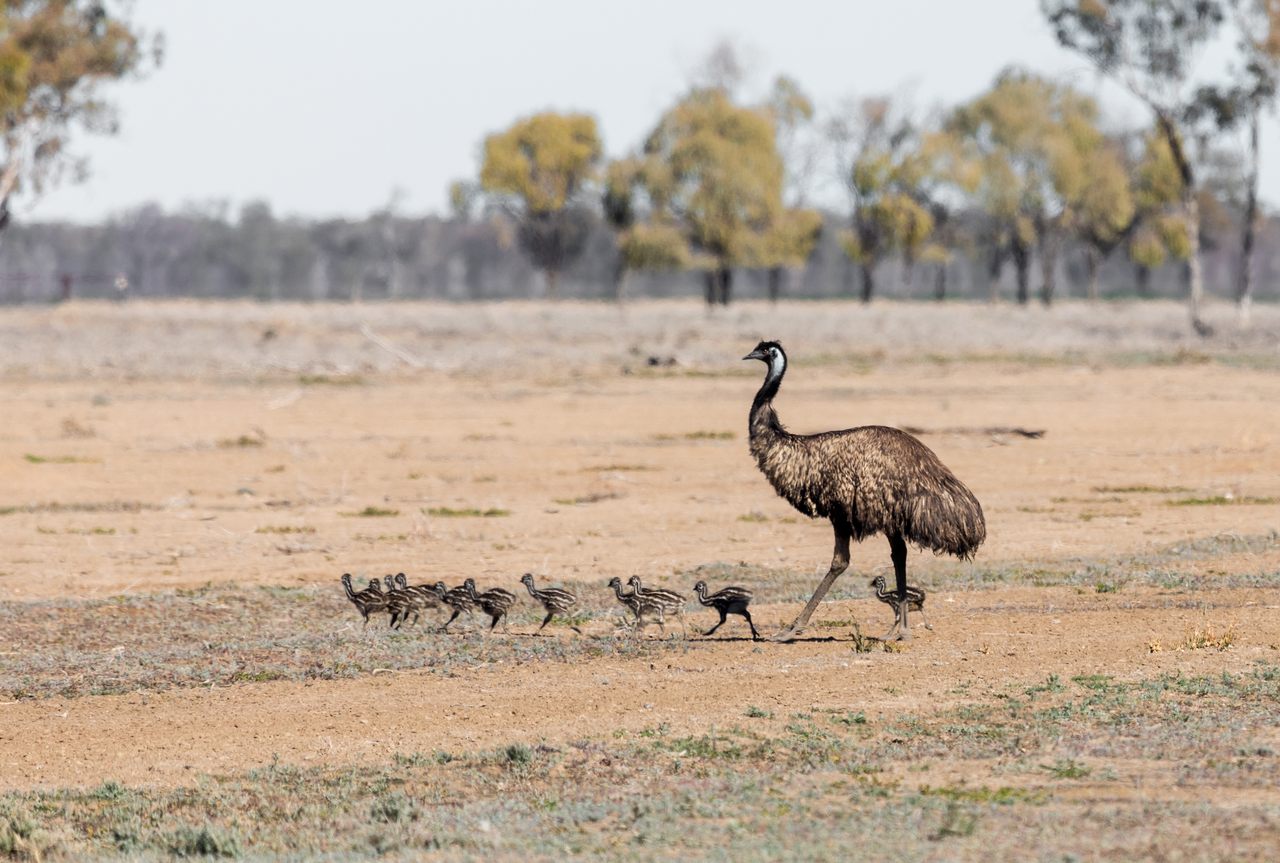 Ecologist Julia Ryeland was on the hunt for emu nests. These trampled patches of vegetation, padded with grass and twigs, measure a few feet across but can still be tricky to spot. At Ryeland’s field site a few years ago, about 300 miles northwest of Sydney, Australia, the nests were camouflaged among clumps of low-growing plants. When she found one, she would gather the gorgeous, deep turquoise eggs carefully—each one weighs more than a pound—and take them to a nearby research station.

After labeling each egg, Ryeland, a Ph.D. student at Western Sydney University at the time, randomly divided eggs into groups and then placed each group in a nest. The goal of the egg-shuffling experiment was to learn more about what makes some nests more successful—with more eggs hatching—than others. It’s a step toward understanding what affects the overall reproduction of the animals, which play an important role in several Australian ecosystems.

As birds go, emus are pretty strange. They’re flightless and taller than the average American woman, with enormous feet that arrestingly bring to mind birds’ evolutionary relationship to dinosaurs. Their mating and parental care behaviors are even stranger. For much of the year, emus will often be observed with a social partner of the opposite sex. But when the mating season arrives, all bets are off: Both males and females mate with multiple partners.

For most birds, producing an egg is just the start of a female’s parental duties, which include tending to the eggs and, depending on species, possibly feeding and caring for the hatchlings. Not so for emus: Once the female lays the eggs, her responsibilities to the brood are complete—but a male emu’s work is just beginning. “Emus are really unique in that they have male-only parental care, which is only true for about two percent of bird species,” says Ryeland.

Tending the nest is a huge investment for an emu dad. He rarely eats or drinks during this time, and can lose up to half his body weight, says Ryeland. Moreover, because both males and females mate with multiple partners—and because females may lay eggs in several different nests—many of these eggs will not even be related to the male minding the nest. One study found that about half the chicks that the male ends up raising are not actually related to him. “It’s a really fascinating thing for a bird to sit on an egg for two months and then to look after this chick for 18 months with the potential that it’s not even his baby,” says Ryeland.

Even with these unusually high levels of cuckoldry, many of the eggs will still contain chicks related to the male. The more eggs overall that hatch, the higher the probability that his DNA will be passed to future generations, so a more successful nest generally still benefits him. Ryeland wanted to know how the number of eggs in an emu nest—which varies widely, from just a couple eggs to more than 30—affects a nest’s overall success. Did more eggs always mean more baby emus? To find out, she redistributed eggs from the emu nests she found, placing clutches of four, 11, or 20 eggs in each nest.

While an emu’s size is certainly intimidating, it wasn’t that difficult to move the eggs around, says Ryeland, adding that emus aren’t particularly aggressive, or especially clever. “Emus will try to get up in your face to scare you, but as soon as you’re taller than them and a bit more scary, they just sprint off,” she says. “They’re not very brave.” If you happen to be shorter than the emu, Ryeland said it’s easy to fool them into thinking you are taller simply by holding your hand above your head.

“My mom says I should be a better advocate for my study species,” Ryeland says. “But no, emus are not very smart. An emu farmer once said to me that they can do two things: they can run, and they can think. But they cannot do both at the same time.”

After redistributing the clutches of emu eggs in the nests, Ryeland waited. It takes almost two months for emu eggs to hatch; when they finally did, she found that the nests with the most eggs didn’t necessarily result in the most chicks. According to a 2021 Behavioral Ecology and Sociobiology paper based on the fieldwork, the eggs in the largest clutches actually had the lowest probability of hatching. On average, less than 25 percent of eggs in the 20-egg clutches hatched. The nests that produced the most chicks were actually the medium-sized clutches, with 11 eggs.

Studying what drives emu egg hatching and general reproductive success helps us understand how populations grow or decline. This is important because, while emus are thriving in most of Australia, there are some regions where they seem to be struggling.

“There have been anecdotal reports of emus disappearing across a lot of the east coast of Australia,” says Ryeland, adding that the population in New South Wales is listed by the state as endangered. “They’ve really quite severely declined,” Ryeland says. “And there’s not a lot known about why that is.”

Any reduction in the emu population could have a substantial impact on an ecosystem because the birds play an important role as seed dispersers. “They’ll eat anything—literally anything—walk along for great distances, and then poop it out in this beautiful substrate of emu poop,” says University of Tasmania’s Matthew Fielding, an emu researcher not involved in Ryeland’s project.

Fielding is interested in emus’ capabilities as seed dispersers in order to find out how the extinction of emus in Tasmania in the 1800s may have affected the environment—and whether it might be a good idea to bring emus back to the island. But reintroduction is a complicated process, and important questions about emus’ reproduction, biology, and ecology remain unanswered.

Fielding says Ryeland’s clutch research is “really important” for a clearer picture of the odd—and oddly endearing—bird. “We know so little,” Fielding says. “There’s so little research on emus, that anything more we learn about their biology and ecology is good news.”

Jo the deer offered researchers a look into migrations and how long it takes deer to visit a forest after a fire.
Video • AO Docs