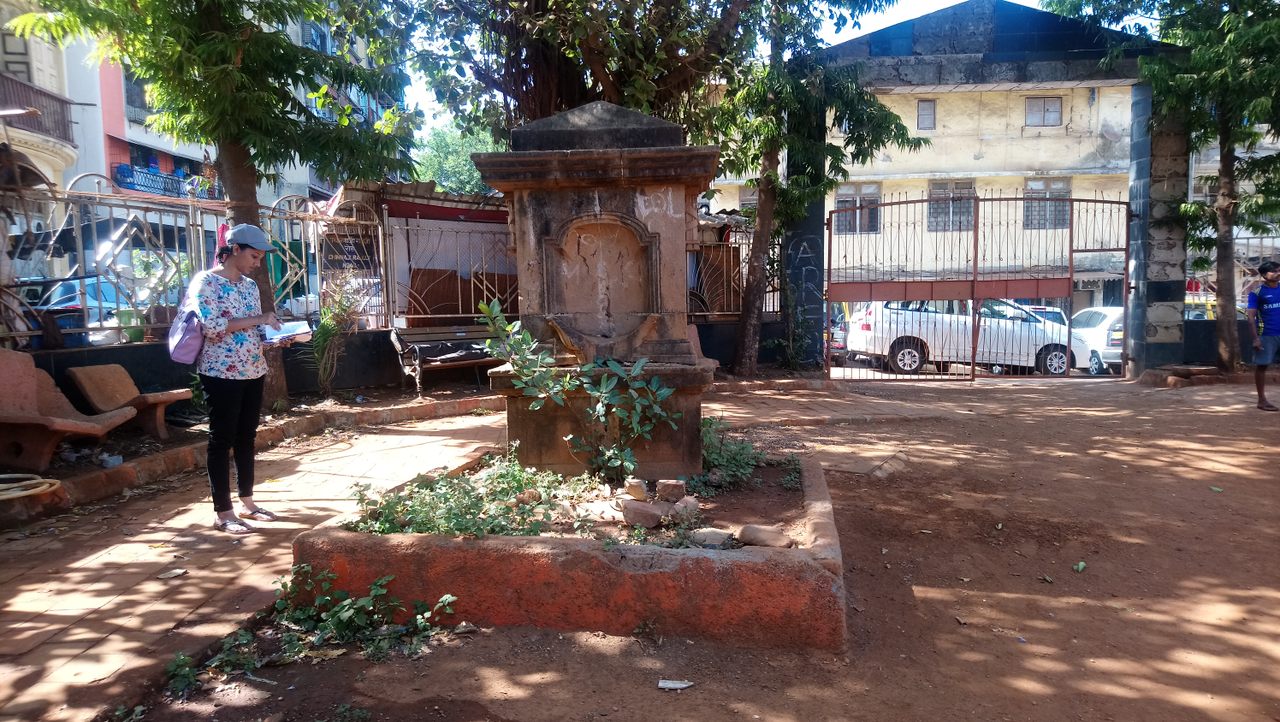 A drinking water fountain in the heart of Mumbai, built by a father in memory of his son.
Destination Guide

On a sweltering October afternoon, I found myself on the edge of Mumbai’s Shivaji Park staring at a water fountain. It looked rather ordinary to me—a stone structure that supported two basins. But as my companion, architect Rahul Chemburkar, explained to me, it was one of a handful of successfully restored colonial-era drinking fountains in the city. This remnant of Mumbai’s past had been in ruins, and was brought back to life just a few weeks earlier.

Chemburkar has been restoring drinking structures since 2008, when the heritage conservation department of Mumbai’s municipal corporation commissioned his architecture firm, Vaastu Vidhaan, to work on a fountain.

“While studying these fountains early on, I realized that they were unique, but neglected and not really spoken of,” he says. “The city seemed to have forgotten them.” It pained him when he read about the demolition of pyaaus, or water fountains, and made it his mission to protect as many as possible. Through his firm, he is currently working on more than two dozen fountains across Mumbai. “It is our moral duty to protect this part of the city’s heritage,” he says. “And if we could revive this idea [of public drinking fountains], it would be in contrast to the plastic bottles we drink from.”

There are no clear numbers on how many pyaaus Mumbai once had, but close to 30 are being restored or are already functioning. Mumbai’s civic authorities and various partners have spearheaded the work on these structures, which are architectural jewels scattered across parts of Bombay (as the city was earlier known). Chemburkar says that they are found in public spaces such as local squares and parks, and along old tram routes and thoroughfares.

The fountains were largely built between the late 1800s and mid 1900s. According to Chemburkar, this was the period when the city’s water infrastructure began to grow, with piped water making an appearance. As Mumbai developed and more people came to the city to work, city officials and the public felt the need for drinking water facilities.

Philanthropists stepped in to fill the gap. “It is considered pious to help people quench their thirst,” Chemburkar says. Most fountains are known by the names of their benefactors. “Many pyaaus were built in the memory of loved ones,” he explains. “There is an element of charity and remembrance.”

The fountains vary in size, with some, like the Ramji Setiba pyaau in Shivaji Park, standing about five feet tall and others, such as the Keshavji Nayak pyaau, rising to more than 20 feet.

They also vary in architectural styles. The Kothari pyaau is opposite Mumbai’s General Post Office, which has an Indo-Saracenic edifice that combines Indian and European elements. The fountain, built by Devidas Kothari in memory of his daughter Lilavati, in 1923, seems to borrow elements from the neighboring building, including decorative friezes and small minarets on the corners.

The Keshavji Nayak pyaau, inaugurated in 1876, looks nothing like a public drinking fountain—it resembles a pavilion or shrine, with red sandstone pilasters, a cupola covered in carved peacocks, and statues of bulls at the entrance, a feature seen in many Hindu temples.

In Crawford Market, one of Mumbai’s busiest bazaars, a pyaau donated by Sir Cowasjee Jehangir takes its inspiration from cathedrals. The 15-foot-high brown-and-white structure has floral stone carvings, arches, and a spire. Sadly, today it sits forgotten, amid piles of rubbish with cobweb-filled spouts.

Many of Mumbai’s pyaaus faced similar fates. As the city developed, the population grew and the demand for water increased. A scarcity of water meant 24/7 supply was difficult, which caused many fountains to run dry. Gradually, water was piped directly into homes and bottled water became available.

“The act of drinking water, which was the central idea of the pyaaus, changed,” Chemburkar says. “So the fountains were neglected.” As real estate became precious in the city, many fountains were demolished, and they disappeared from public consciousness.

The restoration project comes at a time when people are realizing the value of access to water, and drinking fountains in cities including Istanbul, London, and Los Angeles are being restored and installed.

At the start of Mumbai’s restoration projects, teams study a pyaau’s features: the architectural elements, the materials used, whether it had a special trough for animals. Most fountains that Chemburkar has worked on were built with local stone that is easy to find. Depending on the state of the pyaau, the team determines whether it needs to be taken apart entirely and rebuilt, or whether it can be repaired.

Each fountain has unique challenges. One pyaau’s basin was missing, for example, so Chemburkar’s team replaced it by copying an existing one. Another fountain, built in 1929, will have to be raised several feet because the height of the city’s roads and sidewalks has increased.

Beyond restoration, Chemburkar conducts frequent walks and lectures, via the Mumbai Pyaau Project, and sketches postcards of the fountains. I went on a walk last March, before the pandemic, and, along with architecture students, tourists, curious locals, learned about structures that I would have never noticed. The walk also nudged the group to contemplate today’s water-supply challenges.

Architect Purva Dewoolkar has been studying the disparity in Mumbai’s water supply through the lens of legal, sometimes wealthier, settlements and illegal ones such as slums. As a member of Pani Haq Samiti (Right to Water Group), a local organization focused on universal access to water, Dewoolkar and others try to get supply to slums. But due to bureaucratic roadblocks and a lack of standard procedures, out of 1,000 applications, they could only get about 72 to 78 connections over three or four years. As a result, many poor families pay more than rich ones to buy water from private companies.

Activists are pushing officials to create more drinking fountains in low-income areas. In a 2020 report, Pani Haq Samiti recommended that authorities invest in more pyaaus. Mumbai’s civic bodies have been installing water dispensing units in public spaces, such as railway stations, but these units are sometimes privately managed and the water is not free.

What’s more, many of the newer public drinking units, Chemburkar says, are ”not inviting… they are just selling a commodity.” He believes aesthetically built fountains become community spaces with people pausing to take a break during their day. At the benches around the Shivaji Park pyaau, I saw couples stealing quiet moments and students napping between classes.

But he wouldn’t replicate the designs and materials of the pyaaus. Instead, he would use modern elements to build something that represents the 21st century. “We need to use the aesthetic sensitivity of the pyaau and design for today,” he says.

"Sowing water" in this mountainous region has been crucial for people, crops, and biodiversity for more than a millennium.
architecture

Houses and other buildings that rise and fall with water levels are becoming more common in Dutch cities.
islands

The Clever Architectural Feature That Makes Life on Bermuda Possible

How does an island with no lakes, rivers, or streams provide water for 65,000 people? Look up.
architecture

Filthy infrastructure has long been a site of artistry and civic pride.
Video • PinDrop