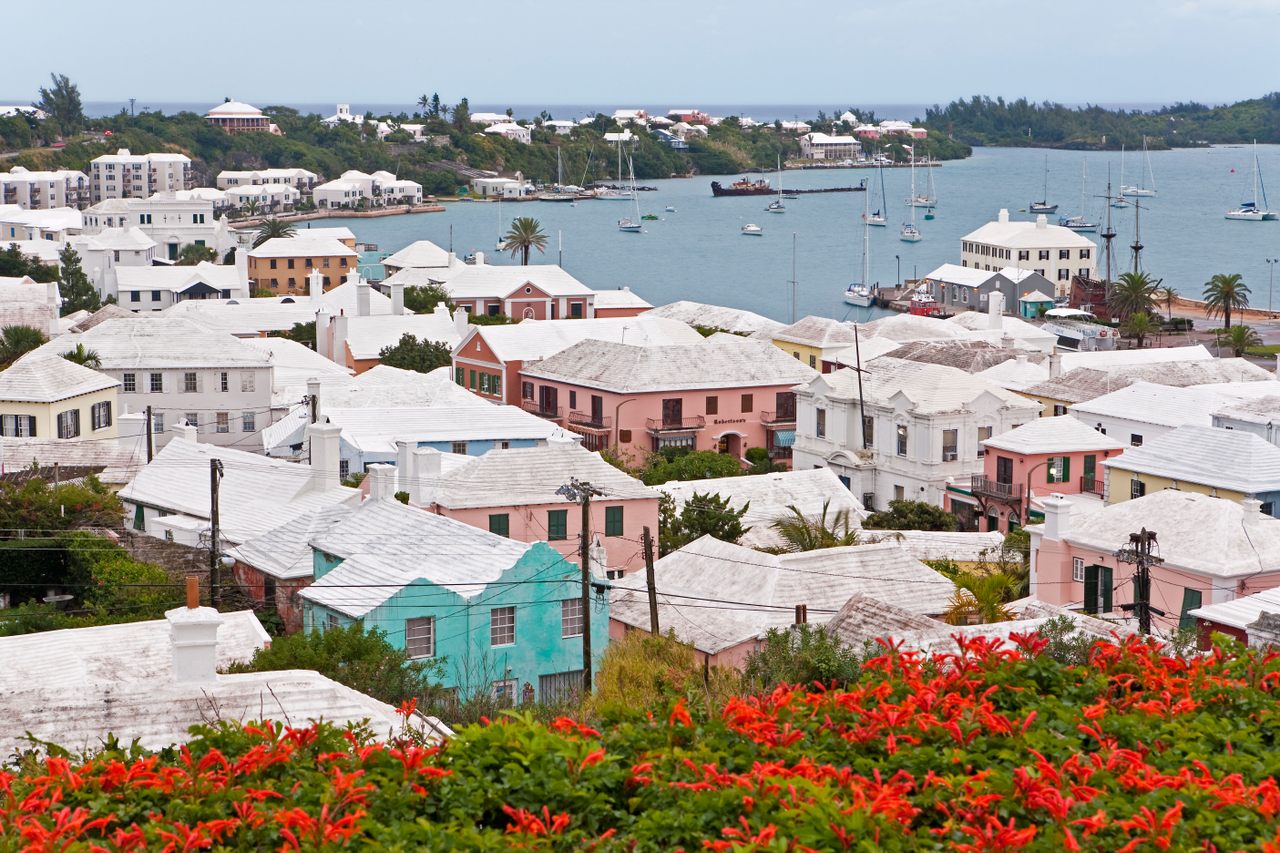 Bermuda's solution to its water conundrum is visible in the historic town of St. George. Gavin Hellier/Alamy
In This Story
Destination Guide

In 1609, the flagship of the Virginia Company, Sea Venture, was blown miserably off course by a brutal summer hurricane that wrecked the ship near a tiny island, some 700 miles off the Virginia coast. Fortunately, no lives were lost. Unfortunately, the island offered not a drop of fresh water.

Today, that island is among the most densely populated countries on Earth, and it is still without a permanent body of fresh water. Oddly enough, visitors to Bermuda can see the solution to the problem of potability before the plane even touches down.

Bermudians are some of the most water-conscious people in the Western world, and this consciousness is built into their homes. The blindingly white, limestone Bermuda Roof—an architectural rain-catch concept with roots dating back to the 17th century—is singularly responsible for making human life possible in the middle of the Atlantic Ocean. The roof of each home is mandated, by law, to catch and redirect rain into underground cisterns that serve as islanders’ primary source of freshwater. While initially conceived as a means of survival, the elegant roofs have become an aesthetic landmark. “Architecturally, Bermuda really hasn’t changed,” says Guilden Gilbert, a born-and-raised Bermudian. “It’s unlikely that you’d see any modern design in island architecture, which I think is actually a good thing.”

It’s an ingenious concept, even if the land itself does most of the work. Bermuda is a limestone island, so for most of the houses, the stone that is unearthed to make room for the foundation and mandatory water tank becomes the slabs that form the actual roof. The sloping slabs then catch, slow, and redirect rain through several pipes that meet in the underground tank. “When it’s heavy rain, you actually hear it in the various downpipes in the walls,” says Geoffrey Smith, an environmental engineer with the Government of Bermuda. “It’s actually a nice sound.” He says regulations demand that 80 percent of each roof be designated for rain catch, and that for every 10 square feet of roof, the tank below must hold 100 gallons of water.

The roofs have side-benefits, too. According to Gilbert, the limestone is naturally cooling, relieving most families of the need for central air conditioning. So long as there are no overhangs or gaps between the coated slabs, the inch-thick roofs are also virtually hurricane-proof. “In rare cases, the whole stone roof will have been lifted up and shifted a foot or two,” says University of Rochester historian Michael Jarvis. “But it’s still solid.”

Between the roofs, pipes, and tanks, the uniquely Bermudian relationship to water trickles into day-to-day life. Hydrogeologist Shaun Lavis grew up in the United Kingdom, but has acclimated to the centrality of rainfall in island living. “I’ve got a little part of my brain that’s always aware of the tank level,” he says. “Pretty healthy at the moment, we’ve had good weather.” He says islanders refer to prolonged bouts of precipitation as “tank-rain” or a “tank-filler.” The water pressure isn’t quite the same as back home, he says, and baths are more of a rarity. “Probably a quarterly event, if there’s been a good rain. But it’s somewhat frowned upon.”

Indeed, rain is exalted, and water waste is condemned. “Bermudian kids are always taught about conservation and the Bermuda Roofs from a young age,” says Gilbert. From taking short showers, to turning off the water while brushing your teeth—and, in rough times—flushing toilets as little as possible, the interplay between water and survival is ingrained from a young age. “We were raised to be cognizant of how much water was in the tank,” he says. “We had to make it last.” Of course, droughts still happen. While roof catch meets the needs of most Bermudians most years, innovations have been made to accommodate an expanding population. In the 20th century, the growth of the tourism industry (today a distant second to financial services) meant the arrival of hoards of water-gluttonous mainlanders, mostly Americans. Around then, according to Jarvis, the island developed its first desalination plants, which use reverse osmosis to make fresh water. Other backup sources were identified throughout the century, including groundwater lenses (fresh water that floats on top of denser saltwater), as well as water mains and trucks to bring water to empty-tanked families. The island now fills all its water needs consistently, but, according to Smith, rain catch from Bermuda Roofs is still far and away the largest source.

Bermudians appreciate the backups, but cling to tradition anyway. As Jarvis says, “Bermudian families strive for self-sufficiency. To need government water is almost like surrendering, like you lost the fight.”

The Risks and Rewards of the Remarkable Desert Truffle

"Sowing water" in this mountainous region has been crucial for people, crops, and biodiversity for more than a millennium.
outsider art