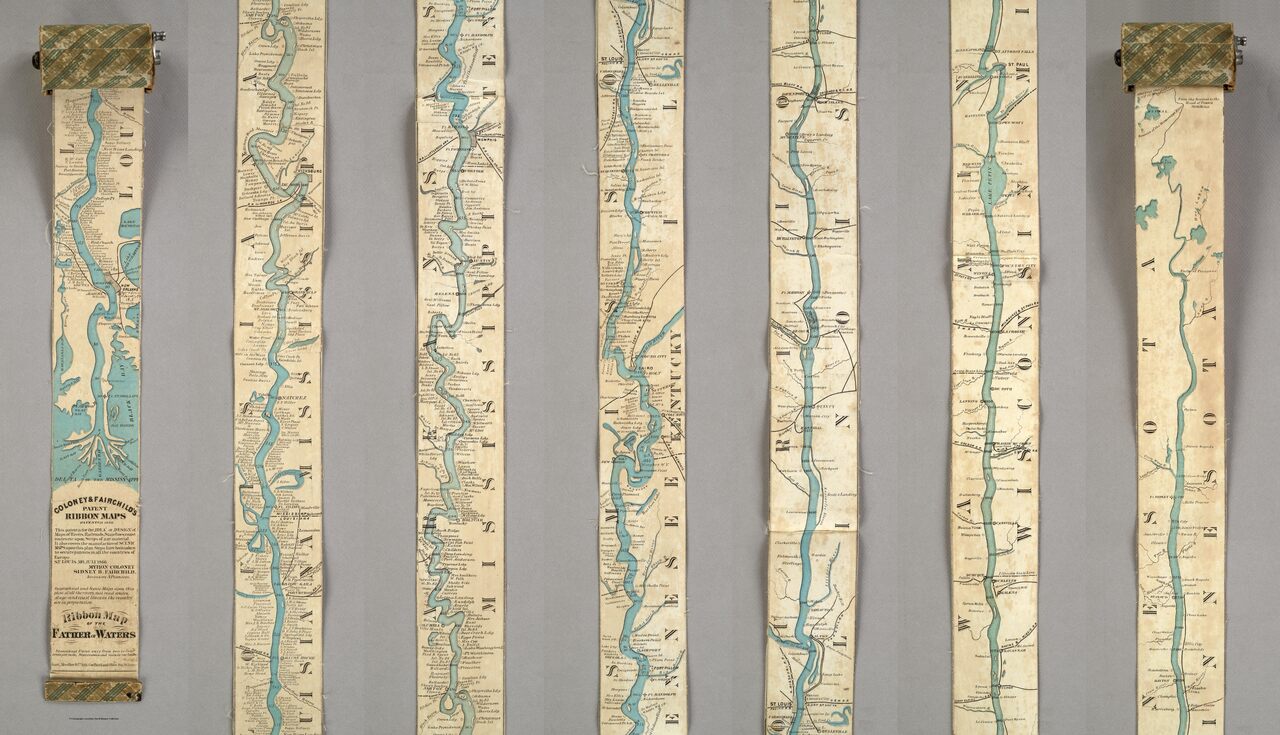 The Ribbon Map of the Father of Waters—pictured rolled up (left) and fully extended (right)—was meant to be wrapped around a spool and brought on steamboat trips. Courtesy David Rumsey Map Collection
In This Story
Destination Guide

Imagine: it’s 1866, and you’ve just hopped on a steamboat heading up the Mississippi River. Excited, you pull out your newest souvenir, a small spool with a strip of linen-backed parchment twisted around it. You begin unwinding, and see a near-future destination: Memphis, marked by a smart bullseye, and the site of a major railroad junction. You twirl it up again and travel back in time: There’s the Mississippi-Louisiana border, which you crossed just yesterday.

Suddenly, a stiff river breeze churns up, and you lose control of your map, which quickly unspools. The end of it gets caught by the wind and floats across the deck. Before you can say anything, whap!—it hits another eager tourist right in the face.

Such were the delights potentially provided by the Ribbon Map of the Father of Waters. A depiction of the entire Mississippi, from the Gulf of Mexico all the way up to northern Minnesota, the map stretched 11 feet long and just under three inches wide, and was meant to be wrapped around a spool and carried in a pocket. Although it never really caught on, it stands as a testament to the many forms maps can take, and as a precursor of how we treat traveling today.

As Jim Akerman, the Curator of Maps at Chicago’s Newberry Library, points out, the Ribbon Map of the Father of Waters belongs to a class of map with a deep history: the “itinerary” or “strip” map. Unlike network maps, which are designed to show all journeying possibilities—think of a road atlas, or a big fold-out trail guide—strip maps “are organized around a specific route of travel,” he explains. “It’s meant to give you very close guidance.”

Strip maps arose from oral or written itineraries, and were used by ancient Romans who wanted to plan trips to nearby towns, and medieval Europeans who hoped to make pilgrimages from London to Jerusalem. Reading one is like getting directions from a friend: left at this landmark, right at that fork.

This form lent itself quite well to rivers, which make up a route all on their own. “In late medieval China, people made beautiful panoramas of the course of the Yangtze River that are basically strip maps,” Akerman says. Fast forward to the early 1800s, and throngs of opportunity-seekers were heading for the American West, often via the Ohio River or the Mississippi. A mapmaker named Zadok Cramer began publishing pocket guidebooks that essentially chopped the rivers into chunks, and laid the strips next to each other for easy viewing. “If they were strung together [instead] they’d be 15 feet or so,” says Akerman.

By the 1860s, a pair of St. Louis-based entrepreneurs had decided there was a market for a river map that embraced its true length. In 1866, Myron Coloney and Sidney B. Fairchild, a.k.a. Coloney and Fairchild, unfurled their first Ribbon Map, a long, blue-inked facsimile of the Mississippi. “Coloney and Fairchild’s patented apparatus required that the single sheet be cut into strips, attached end-to-end, mounted on linen, and then rolled inside a wooden, metal, or paper spool,” writes art historian Nenette Luarca-Shoaf in an article in Common-place. (“This patent is for the ‘IDEA,’” the pair specified when filing it.)

This map would not have been useful to steamboat captains: “Because the river channel changed so often, the captains actually had to know the river in intuitive ways … informed by their extensive travel and understanding,” Luarca-Shoaf says. It wouldn’t have been too handy for people moving West, either. Instead, it was marketed toward tourists, who were flocking to the Mississippi to see the sights and ride the steamboats.

“The river was a source of great awe,” she says. “That kind of length, that kind of spaciousness was incomprehensible to a lot of folks who were coming from the East Coast.” An advertisement for the ribbon map suggests that people needed an outlet for that awe: having your own chart to unroll, it promised, would stop you from “constant[ly] questioning… the officers of the boat,” and causing “an immensity of annoyance” to them.

It wasn’t just a marketing gimmick, though. By choosing this particular form, Coloney and Fairchild leaned into a particular depiction of the Mississippi that took shape during the Civil War. “There was this idea that because the river went from north to south, it was a great unifier for the country,” Luarca-Shoaf says—that it tied the divided North and South together like, well, a ribbon. At the same time, they took pains to include important battle sites, like Vicksburg. That these sites made it onto the map just a year after the war ended “shows that the war had marked the landscape in more than physical ways,” she says. “It had become part of the history of the place.”

According to Akerman, Coloney and Fairchild had planned to produce a whole series of ribbon maps for other popular, linear destinations, like retail-heavy streets and railway lines. (They may have made one other, of Broadway in New York City.) But despite the apparent success of this original effort—a September 1866 article in the New Orleans Times-Picayune indicates that the entire first run of 1,000 sold out quickly, making room for a more detailed second edition, which is the one pictured throughout this article—the company seems to have given up.

Today, the remaining copies of the Ribbon Map of the Father of Waters sit spooled up in map libraries and local history museums, testaments to the idiosyncrasies of their particular users. One, at the Missouri Historical Society, is from the collection of a riverboat pilot, suggesting a moment of either aspiration (if he bought it before he got into the profession) or nostalgia (if he snapped it up after). The Denver Public Library has one with a patterned red case and a tiny hand crank.

Luarca-Shoaf has stretched out and wound up a number of these, and tried to puzzle out how well they’d work in context. She says it’s not too hard to see why the idea didn’t succeed. “[Imagine] the thing gets all wet, and it’s kind of just hanging out,” she describes. “I’ve never found any definitive evidence that anybody actually ever used this.” It’s certainly hard to imagine carrying them around today.

But as she and Akerman both point out, in the years since the Ribbon Map’s demise, the genre it belonged to—the pocket-sized itinerary map—has snapped up a massive market share. Now, every time we take out our phones to try to get somewhere, we can choose to be led carefully along, step by step, by Google Maps or Waze. The only real difference is that the scrolling stays onscreen: safer for our fellow travelers, but a whole lot less exciting.

Found in the Garbage: A Supposed Bone of a First-Century Pope

A 19th-century infographic that stacks a redwood against St. Peter's Basilica.
maps

One man's journey from GIS specialist to artist.
Read more
Thanks for sharing!