How a Globemaker Navigates a Digital World - Atlas Obscura 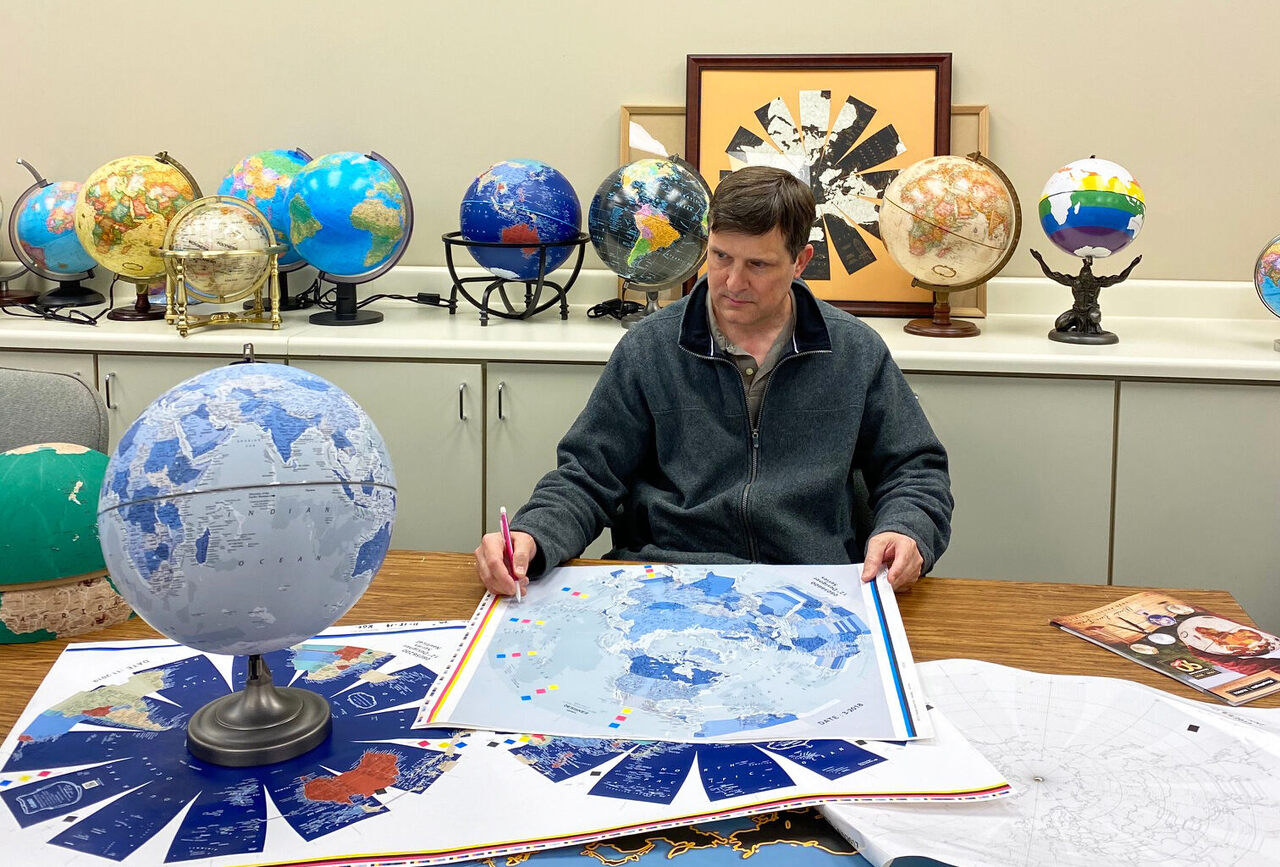 Nearly a decade ago, a shipment of several hundred globes from Hillside, Illinois, arrived at a port in Chile. There was nothing inherently wrong with them—they were round, depicted Earth with some measure of accuracy, and would have passed muster almost anywhere else—but customs officials sent them right back to Replogle Globes, the United States–based manufacturer. The problem was that the maps on them didn’t fit with Chile’s view of the world, which includes Chilean dominion over certain disputed territories—claims that are likely of little to no concern to most other nations. “It’s funny, what we find is [one country] usually doesn’t care about anything outside that country,” says Kevin Dzurny, chief cartographer at Replogle, of the company’s international customers. “But I’ll be darned if that political border isn’t showing.”

Dzurny is responsible for the accuracy of the maps on the hundreds of thousands of globes Replogle sells in 100 different countries every year. When he was hired at Replogle 27 years ago, Google Maps was more than a decade away. Replogle had not yet hit its all-time sales peak, which would come in the fourth quarter of 2001, in the wake of 9/11. At that time, at school and at home, globes, atlases, and paper maps were how we made sense of the world’s geography and scale. Now, in an age when you can “walk” down streets in a web browser and pinpoint any place in the world in a matter of seconds, globes, particularly in America, are becoming less primary references than decorative objects. “In a lot of schools, globes will be sitting there for 15 years, which blows my mind,” Dzurny says. “Geography here is not as important as it used to be.”

But abroad, in many of the other countries where Replogle sells globes, they’re still in use in classrooms, according to Dzurny—often in countries where territorial conflicts are ongoing or fresh in the national consciousness. “Geography overseas—in China and Japan, Serbia, places like that—is huge,” Dzurny says. “They teach it and they enforce it and they want people to learn about the geography of the world, not just their country.” For countries such as Chile, a globe can be something more than decorative or even educational—it can be an expression of national identity, a manifestation of pride and a certain geopolitical view of the world. As the company’s lead mapmaker, Dzurny is responsible for plotting and tracking these variant takes of the world, and making sure that the right globe is made for the right country.

Such geopolitical reconfiguring has always been a part of the business at Replogle, which was founded by former school supply salesman Luther Replogle at the start of the Great Depression, and blossomed during World War II as President Roosevelt encouraged listeners to “get out your globe” during his fireside chats. As Dzurny’s predecessor LeRoy Tolman, who worked at the company for 44 years, told The Wall Street Journal in 1986: “The customer’s not always right. But he’s always a customer.”

Let’s take those Chile-bound globes, for example. Any globe acceptable to Chile’s National Department of State Borders and Boundaries must include the country’s territorial claim in Antarctica, which overlaps with both British and Argentine claims. It also must denote a maritime claim that dates back to the 19th-century War of the Pacific, in which Chile won land from Peru and Bolivia, and later claimed a large portion of the bountiful fishing waters off the southern coast of Peru, though the maritime borders were not officially resolved at the time. In 2014 the International Court of Justice in The Hague ruled in favor of Peru, removing 8,000 square miles of ocean from Chile’s claim—but not from its globes. “Chile supplies us with the actual dimensions of the maritime line and the latitude and longitude and direction of that maritime line,” Dzurny says.

Dzurny confirms country-specific adjustments with the relevant government agencies in those countries, but mistakes still happen—“99.999 percent of the time, an error in shipping,” he says. The globes shipped to Chile were in Spanish, but did not include the approved cartography. So back they went.

Chile is one of 11 countries—along with Japan, China, Argentina, Turkey, India, Pakistan, Greece, Israel, Ukraine, and Russia—that require special cartography from Replogle. “In order to sell globes in those particular countries, you have to abide by the rules and regulations of that country,” Dzurny says. “It’s kind of a joke, but in some sense, I almost feel like I could start a war.”

A current hot-button example is Kashmir, the predominantly Muslim Himalayan territory claimed by both India and Pakistan. In August 2019 the Indian government revoked Kashmir’s special status as an autonomous region, sent in thousands of troops, and cut off all phone and internet access in the region. In the next three months, “I probably got 15 calls on Kashmir,” Dzurny says, noting that both American and Indian customers have inquired about how Replogle depicts the region. The answer depends on where you’re seeing the globe. For globes sold to India, he says, “we have to make sure that our borders comply with the government of India,” and show Kashmir within its borders. Otherwise, Dzurny defaults to the Central Intelligence Agency’s World Factbook take, which places dotted lines around the region so as not to demarcate it as belonging to a particular country.

In China, globes have to show Taiwan as part of the larger People’s Republic, using the same coloring as the mainland. They also depict the Nine-Dash Line, a claim to a significant portion of the South China Sea, where countries including Malaysia, Brunei, the Philippines, and Taiwan have also asserted territory—and a claim on which The Hague has ruled China has no legal standing. (In early October 2019, the border appeared on a map in the animated movie Abominable, causing Vietnam and Malaysia to pull the movie from theaters.) “If you don’t include these zones, these lines, you definitely won’t be able to sell globes in China,” Dzurny says.

The cartographer isn’t bothered by making these changes, and the world views they reinforce. “Do I have any political stance? Not really, I mean I couldn’t have one in this job, in a sense. It’s about trying to get our product out there to help people learn,” he says. “You can’t just say, ‘China’s wrong for teaching [their view] or India’s wrong for teaching about Kashmir.’ That’s their policy … it’s no different than what we do here.”

To Dzurny’s point, the United States Board on Geographic Names (BGN), a federal body that works with the Secretary of the Interior to implement uniform name usage throughout the federal government, and which Dzurny relies on as a key reference, is strongly influenced by American policy. As Trent Palmer, the BGN’s executive secretary for foreign names explains, “Because we’re a part of the U.S. government, we need to present a unified U.S. government position on foreign places, which gets into foreign policy.” The Foreign Names Committee is comprised of about 15 members from various federal agencies, including the State Department, CIA, and Library of Congress. “The State Department may have a position about something, and in order to be consistent with that foreign policy, it will result in a certain name being the one BGN authorizes for use,” Palmer explains, leading to name choices that can be controversial, such as the Sea of Japan (disputed by Korea) or the Persian Gulf (which Arab countries call the “Arabian Gulf”). “Names are very powerful.”

Though globes are increasingly less common, Dzurny says that over the past decade he’s noticed an increase in geographic awareness, and particular attention to out-of-date borders, naming, or mistakes. More customers, it seems, have been calling in to complain. “People are more aware of updates to maps than 10, 12 years ago,” he says. “It seems like people follow more politically what’s going on in the world.”

Now that Google Maps becomes the world’s most influential cartographer (so influential, in fact, that in 2010, Nicaragua used a border error as an excuse to invade Costa Rica), Replogle has maintained its business by focusing on globes as artifacts, relics that, unlike Google’s ostensibly real-time and agnostic digital maps, capture the geopolitical moment of their making and the design sense of the customer. For example, Replogle CEO Joe Wright notes that the Frank Lloyd Wright Series, which offers stands based on the architect’s aesthetic, is currently “enjoying a resurgence in Japan.” Presumably those globes also include that country’s claim to four of the Kuril Islands—part of a dispute with Russia that dates back to 1945.

Dzurny understands the current lay of the land. “I keep the cartography up to date,” he says, “but most people just care what it looks like.”

When American Voters Had 2 Choices: Whig or Loco Foco

This fascinating electoral map from 1840 documents a chaotic time in American politics.
maps

A Border Town Is Now Isolated From Both the U.S. and Canada

Ever since COVID-19 shut down the border, Point Roberts has been neither here nor there.
politics

The Uncertain Future of a Border-Straddling Liquor

Sotol could bring Texans and Mexicans together, or divide them.
maps

When Cameroon and Nigeria settled their long-standing border dispute, it was just the beginning. Then a 21st-century border had to be laid down.
Video • Object of Intrigue

This Map Shows How the Presidential Election is 1888 Repeating Itself

The election was fought over trade.
Read more
Thanks for sharing!