Why Historians Are Reexamining the Case of the Woman Who Gave Birth to Rabbits - Atlas Obscura
Want to see fewer ads? Become a Member. 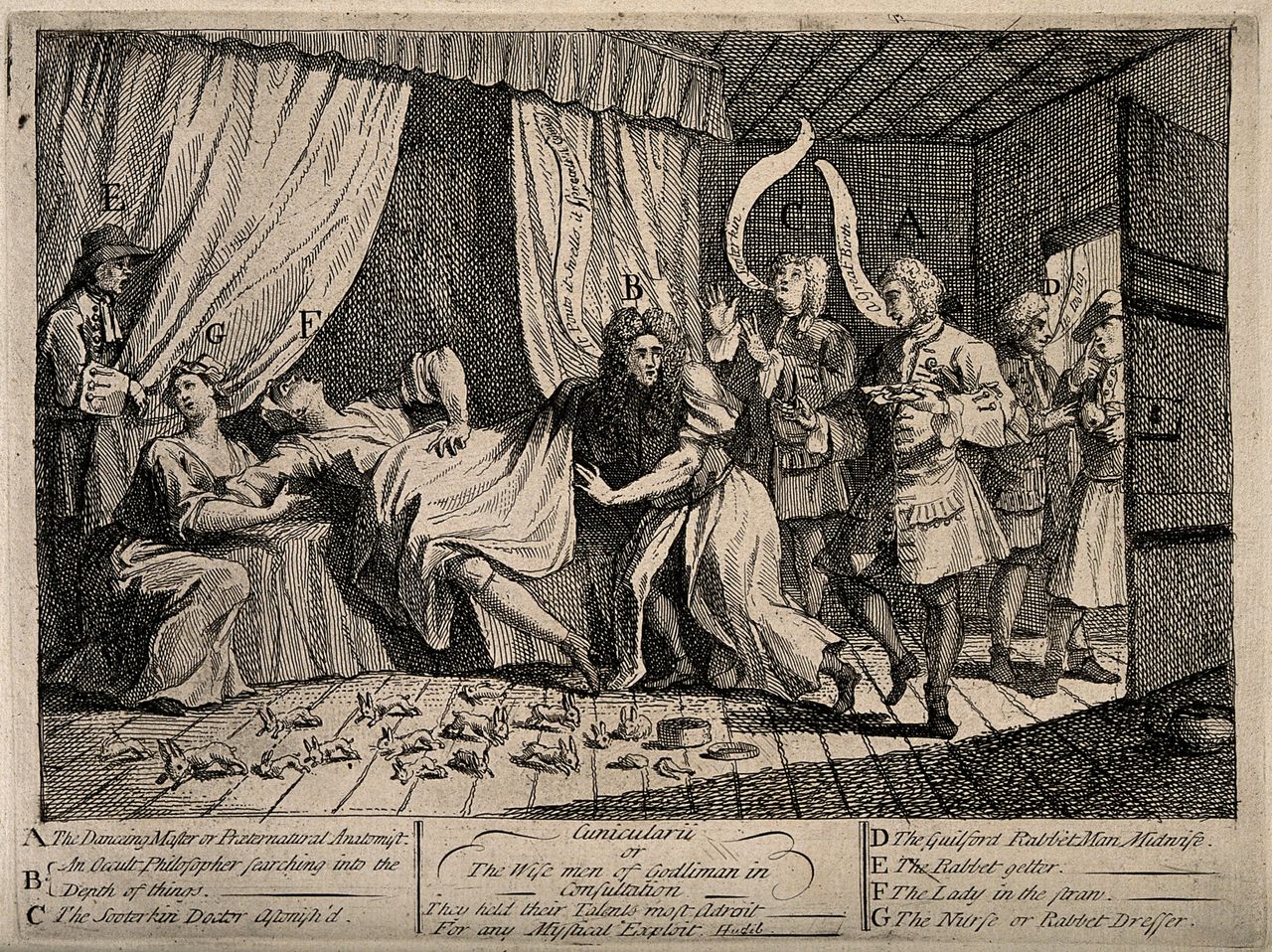 The curios of pharmacist and collector Henry Wellcome.
Destination Guide

In 1726, London was hoodwinked by a poor, illiterate woman named Mary Toft. She had fooled the city’s finest doctors, scientists, and even the King. She, apparently, could give birth to rabbits. It was not a skill anyone had been clamoring for, but it understandably had everyone fascinated. Toft delivered on that promise—17 times over, leading to a spectacle that mesmerized the nation for several months. At least until she was inevitably exposed.

Today, Toft has been relegated to a footnote in the “weird” archives of history. She has become an entry in a listicle, a cocktail fact, a curiosity, proof that people in the 18th century had to have been different from us in some crucial, preposterous way. But Karen Harvey, a historian at the University of Birmingham, thinks we should take Toft more seriously, as a poor woman caught up in a power struggle between powerful men, a woman who lost authority over her body in the process—a story that says a great deal about its time and place. “The idea is absurd, and we know it’s absurd,” Harvey says. “But when you think about it, it’s quite a ghastly story.”

Harvey began teaching Toft’s case to her undergraduate history students, and soon realized that historians had left out a great deal of what she saw as crucial to it. “Nobody had asked very many questions about her and her life,” she says. So Harvey dug into Toft’s confessions, which can be found today in the University of Glasgow’s special collections. The scholar was struck by how much distress Toft appeared to be in, and how explicitly she articulated the pain of the whole process. Rather than a master manipulator, Toft appeared to have been exploited herself. “‘But all along, she says, ‘It wasn’t me, it wasn’t my idea, there are women who put me up to it,’” Harvey says. “I’m not sure she had any power at all.”

Toft was born Mary Denyer in 1703 in Godalming, Surrey, just about 40 miles from London. Godalming was one of the poorest areas in the county, according to Harvey’s paper “Rabbits, Whigs and Hunters: Women and Protest in Mary Toft’s Monstrous Births of 1726.” At 17, she married the wool textile worker Joshua Toft, 18, and soon had two children. Every morning, Mary Toft walked two hours to labor in a hop field, another grueling day in a relatively grueling life.

Toft was just 25 when she delivered her first monster. The ruse began on September 27, 1726. She’d miscarried the month before—a common outcome for pregnant peasants in the 18th century, who were required to continue working in the fields while pregnant—and reportedly delivered several lumps of flesh, which may have been a malformed placenta. But this latest “birth” did not appear to have been human. Toft’s family called upon local obstetrician John Howard, who helped her deliver what he described as “three legs of a Cat of a Tabby Colour, and one leg of a Rabbet: the guts were as a Cat’s and in them were three pieces of the Back-Bone of an Eel,” according to Fiona Haslam’s From Hogarth to Rowlandson: Medicine in Art in Eighteenth-Century Britain. In one particularly productive day, according to Niki Russell, who works in the University of Glasgow’s special collections, Toft allegedly gave birth to a nine dead baby rabbits.

Entranced by what seemed to be a supernatural occurrence, Howard wrote to England’s most revered doctors and scientists, as well as the secretary of King George I. The monarch sent two men to investigate: Nathaniel St. André, his Swiss surgeon-anatomist, and Samuel Molyneux, the Prince of Wales’s secretary. Toft had already become a local celebrity, and she was moved from Godalming to a larger town of Guildford, where Howard worked. Whenever Toft delivered a rabbit, Howard promptly pickled it and placed it in a jar on a shelf in his study.

The noblemen arrived on November 15 to learn, rather conveniently, that Toft had just gone into labor with her fifteenth dead rabbit. St. André and Molyneux then witnessed the births of a couple more. Examination of the bunnies suggested, as one might expect, they could not have originated in Toft’s body; one’s stomach contained remnants of hay and grass. Some appeared to be fetuses, while others were maybe three months old. But St. André was just thrilled by the possibility, and he explained things away, reasoning that the rabbits were delivered dead and, in some cases, in pieces because of the contractions of labor, British historian Edward White wrote in The Paris Review. And so St. André took one of the pickled rabbits back to the king.

By way of explanation, Toft said that she had been startled by a rabbit while working in the field. This notion complied with a theory, quite popular at the time, called “maternal impression,” which attempted to explain birth defects and other congenital disorders, according to Russell. Joseph Merrick, known as the “Elephant Man,” explained his own condition along these lines, claiming that his mother was startled by an elephant while pregnant with him. St. André was thoroughly convinced that Toft’s case was a stunning example of this theory. Other doctors, such as the respected midwives James Douglas and Sir Richard Manningham, not so much.

On November 29, Toft was taken to a bath house in London to be observed further. There, she was examined frequently, by as many as 10 doctors at a time, all of whom were men, Harvey writes in her paper, “What Mary Toft Felt: Women’s Voices, Pain, Power and the Body.” She gave birth to no more rabbits, and also seems to have taken quite ill. But it was during this time that a porter was caught sneaking a rabbit into Toft’s room. He explained to Douglas that Toft’s sister-in-law, Margaret Toft, had asked him to obtain the smallest rabbit he could find. Toft refused to confess until Manningham threatened to perform surgery to determine if she had strange reproductive organs. On December 7, she came clean. The confession surprised very few, but was unfortunately timed for St. André, who had just published his thrilling, “true-to-life” exposé, “A Short Narrative of an Extraordinary Delivery of Rabbets,” just four days prior. Needless to say, his career was never quite the same.

Though the rabbit births weren’t real, the pain was. According to Toft’s confessions, the ruse relied on an accomplice placing parts of dead animals into Toft’s vagina—painful, difficult, and dangerous. Per St. André’s early reports, Toft’s rabbits were often delivered with their sharp nails intact. Because these animal remains were likely hidden in Toft’s body for several weeks, Harvey says, “It’s astonishing she didn’t die of a bacterial infection.”

Rabbits were widely available at the time, and they also symbolized the carelessness of nobility, Harvey adds. In medieval Britain, rabbits lived in warrens, built by local lords who sold their meat and fur as elite goods. These rabbits frequently escaped to munch on commoners’ grasslands and gardens. “Landowners’ rabbits were seen as a pest for lower status people in rural areas,” Harvey says. “So I think there might be something quite political about that choice.”

It’s impossible to say why Toft executed this dangerous, strange ruse, but Harvey doesn’t believe Toft to have been primarily responsible. “She was a young, extremely poor woman from a small town who was taken to London, all the time escorted and watched by titled, landed, aristocratic men,” Harvey says. “I think she was just playing the lead role in a performance orchestrated by other people.” In her confessions, Toft repeatedly blamed other people: her husband, her mother-in-law, even the wife of a local organ-grinder.

When the hoax was revealed, the papers had a field day—ridiculing the venerated medical professionals in particular. “It was the media sensation of 1726 to 1727,” Russell says. “It certainly helped to tarnish the reputation of doctors as a profession.” But Toft did not escape opprobrium. On December 9, she was charged as a “Notorious and Vile Cheat” and incarcerated at Bridewell prison for four months. Crowds of people came to gawk into her public-facing cell. Eventually, she was released without charge, and disappeared back into some kind of obscurity. But her place in history had been established. When she died in 1763 at the age of 60, the parish noted her as “Mary Toft, Widow, the Impostress Rabbitt.”

Toft’s case still fascinates. Russell receives many inquiries about it from people visiting the Glasgow library. She is also a rather popular subject at London’s Wellcome Library, which recently held an art installation inspired by her. “It could have been seen as a way out of grinding poverty or a desire just to be noticed or important for a short while,” Russell says. “But she seemed completely overwhelmed and scared, fearful of what would happen to her for making fools out of so many prominent people in society.”

The most famous image of Mary Toft is a print by the great satirist William Hogarth. In Cunicularii—a pun on the Latin words for “rabbit” (cuniculus) and “vulva” (cunnus)—Hogarth depicts Toft’s body wrenched in labor, surrounded by doctors. It is dramatic, but not flattering. Hogarth wanted to satirize the gullibility of medical professionals of the day, many of whom sought to gain fame through such strange cases. Harvey, who will soon publish a book that aims to humanize Toft, first encountered the case through the print. She immediately noticed how Toft was surrounded by so many men, including her husband and a doctor with his arm up her skirt. “You could see her in agony, but it almost looks like she’s experiencing ecstasy,” she says. “Either way, she’s in a very vulnerable position.”

A new study suggests the soundscape could have affected the mental health of 19th-century settlers.
medical museums

Marie Grissot and Aimée Potens are just two of the women finally being written back into the history of childbirth.
nobel prize

A young medical researcher's idea led to a powerful weapon against the disease—and a Nobel Prize.
Video