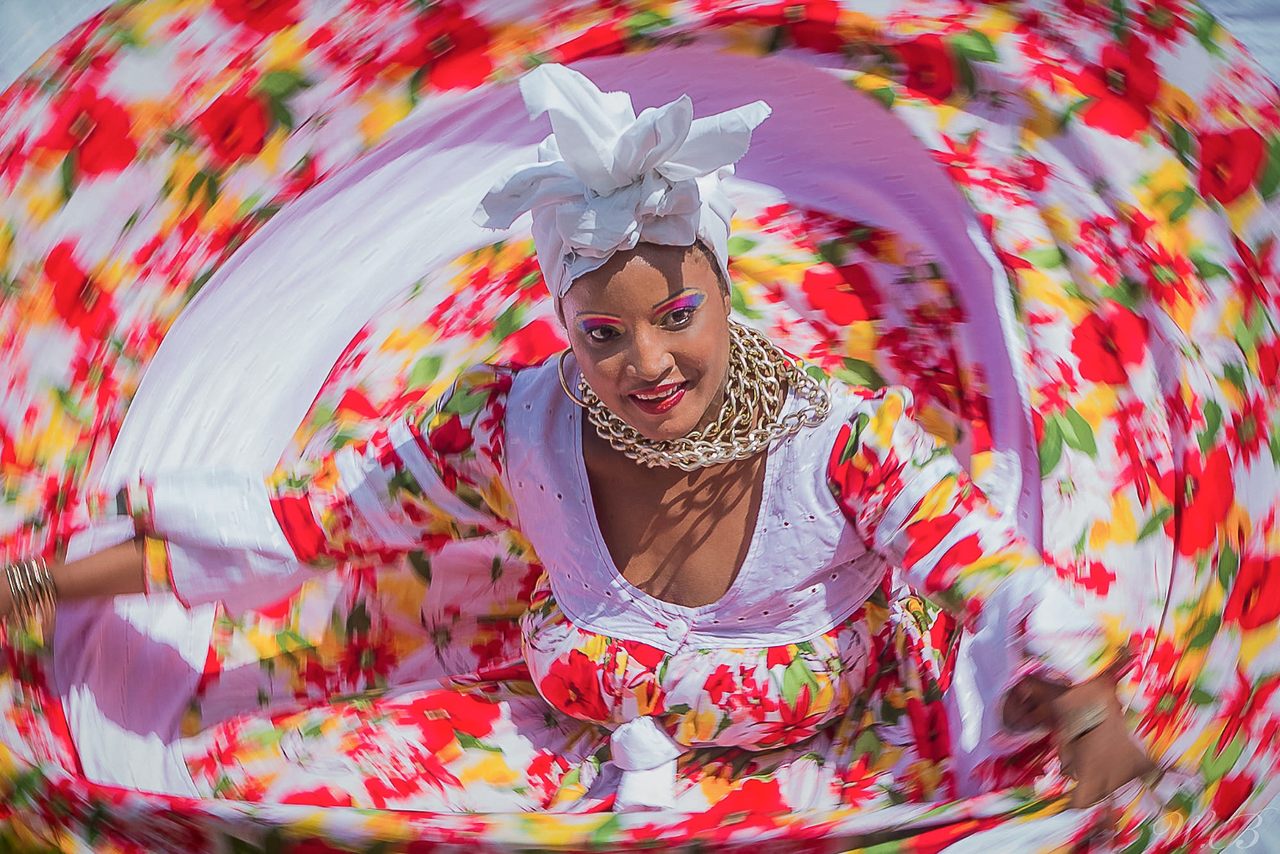 On May 22 each year, when the eastern Caribbean island of Martinique observes Emancipation Day, drums beat from sunrise until the break of dawn the next day. Participants at open-air, starlit gatherings dance, sing, play drums, and feast for ancestors who fought to break the chains of bondage. The uprising that eventually led to the abolition of slavery on the island in 1848 was sparked by the arrest of Romain, an enslaved man who refused to comply with his master’s ban on beating drums.

Today, drums are still a symbol of rebellion and freedom. The traditional dances that span the island each May 22, at performances called swaré bèlè, are filled with an electrifying aura of reverence and honor. But the bèlè is not only a genre of ancestral Afro-Caribbean drum-dance practices. Rather, it is an mannyè viv: a lifestyle and worldview through which many people find healing and empowerment for themselves and their communities.

My first encounter with bèlè occurred when I was a graduate student in anthropology, conducting fieldwork in Martinique. As a former dancer, I was drawn to how bèlè drummers, dancers, and singers experience spiritual and cultural freedom. Performers tell me their participation feels transformative, sacred, and otherworldly.

Martinique is an overseas region of France in the Lesser Antilles islands. Most of the 400,000 people living there are descended from Africans brought to the islands by the slave trade, whose traditions have left a deep imprint on Martinican culture.

Centuries of history have given bèlè a complex set of symbols, only understood by those deeply immersed in the practice. Swaré bèlè gatherings typically begin with a few matches of ladja/danmyé, a martial art tradition between two combatants in the center of a circle, which warms up the energy of the space as guests are arriving.

The remainder of the event involves an improvised rotation of performers playing and dancing sets from the bèlè linò repertoire. These square dances use the quadrille configuration, with four pairs of female and male dancers. After the opening sequences, each pair takes turns dancing in a playful exchange in the center of the circle, then dances toward the drummers to salute them.

Bèlè traditions use the tanbou, a goat-skinned conical drum. There is also the tibwa: two wooden sticks beaten on the side of the drum at a steady tempo. The ensemble of dancers, drummers, and singers is normally encircled by a crowd of spectators who clap their hands, sway their bodies, and join in the song’s refrain. All dancers master the base repertoire. Yet the order and style of interactions between partners is improvised—making it remarkable that the drummers can match their rhythm to the dancers’ intricate footwork.

In the playful, flirtatious, and at times competitive game of certain bèlè styles, the woman is the object of her male partner’s pursuit, and she ultimately decides if she will welcome his affections. This aspect of bèlè performance, whereby women are admired and praised for their sensual dance prowess, brings female performers a sense of affirmation.

Martinique has been under French control since 1635. Even during the post-colonial era, many Black Martinican folk traditions faced repression, as leaders imposed mainland French culture on the population. For example, bèlè practices were often denigrated as bagay vyé nèg, bagay djab and bagay ki ja pasé: primitive, indecent and outdated, in the Martinican Creole language. To many in the Catholic Church, traditional drumming and dance symbolized heathenism. In a country where the vast majority of people belong to the church, it was difficult for devout Catholics to support bèlè.

Many practitioners see bèlè as a dance of the earth that reinforces human connections with the land, divine spirits, and ideals of freedom. Touted as a fertility ritual for both humans and the land, the dance reflects sensuality between partners. Other symbolism suggests sacred connections with the soil, vegetation, and water on which enslaved ancestors of Martinicans labored and survived. Many dance movements represent agricultural labor.

During the 1980s, student activists and youth groups led initiatives to revive traditions that had nearly dissolved as a result of French pressure to assimilate. Today an ever-growing community has embraced bèlè as they challenge the legacy of colonialism and racism in Martinique. Bèlè performance is increasingly visible in the Catholic Church. Bèlè légliz or “church bèlè” fuses the liturgy with references to the African and diasporic heritage of Martinicans.

Some bèlè activists weave in symbols of ancestor reverence and land stewardship, which are also found in Caribbean religious traditions such as Haitian Vodou, Cuban Santería, Brazilian Candomblé, and Quimbois, Martinique’s tradition of folk healing. An increasing number of practitioners assert that bèlè is a “secular spirituality,” viewing it as a form of social healing from subjugation. Many of the people I have interviewed speak about bèlè as an “otherworldly” experience with unique energy that helps them cope with their society’s shadows of colonialism and slavery, and the post-colonial transition.

The bèlè drum and its associated dances have become the rallying cry around which many bèlè cultural activists organize daily life, such as by teaching classes and participating in mutual aid projects. Swaré bèlè gatherings are often associated with community, and have become key opportunities for attendees to express cultural pride, political solidarity, and hopes for change. These events often pay homage to historical figures who made contributions to struggles for Black liberation, such as poet and politician Aimé Césaire and philosopher Frantz Fanon.

Over the last 13 years, my research has probed how traditional dance expresses resistance, emotions, spirituality, and even feelings of transcendence. I have also explored how bèlè complicates black-and-white ideas about what is “sacred” versus what is “secular.” Bèlè dances on the line between the two, reflecting the complex legacy of colonialism that continues to shape life in the Caribbean.

Camee Maddox-Wingfield is a cultural anthropologist, dance ethnographer, and assistant professor at the University of Maryland, Baltimore County.

Every January, This City in Ecuador Fills With Dancing Devils

Diablada de Píllaro is a rebellious but festive answer to a much older tradition begun by Spanish colonizers.
exploration

Can the Māori Connection to Antarctica Help Safeguard the Continent’s Future?

Indigenous ties to the bottom of the world go back more than a millennium, and could point the way forward.
museums

This Royal Coach Is Forcing a Reckoning With Racism

A gilded royal vehicle in the Netherlands—currently being restored—has sparked conversations about the colonial past.
festivals

The shells may have once pointed the way to freedom.
Video • AO Docs

3:54
Want to see fewer ads? Become a Member.
From Around the Web
THE GASTRO OBSCURA BOOK
Taste the World!
An eye-opening journey through the history, culture, and places of the culinary world. Order Now