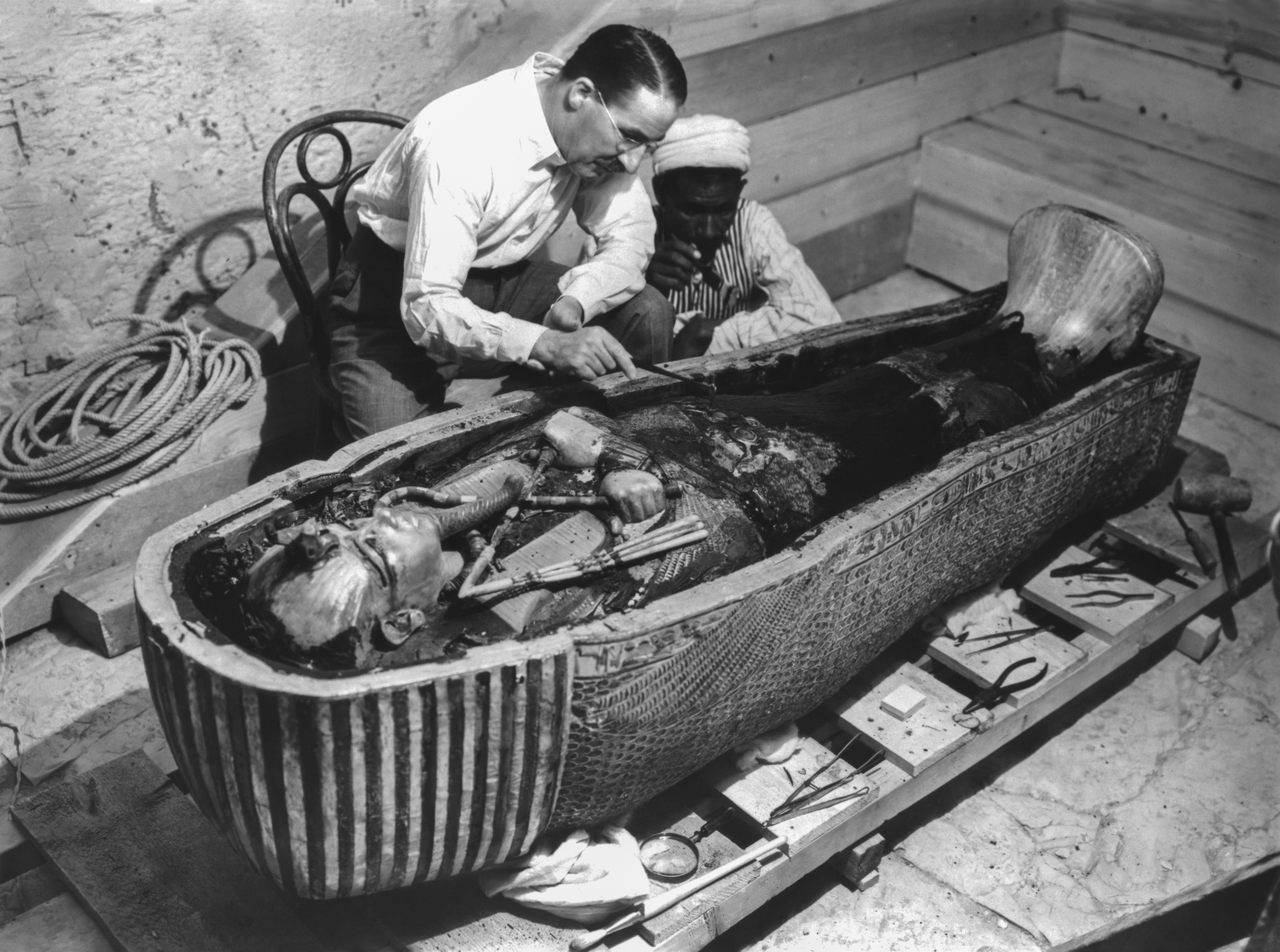 English archeologist Howard Carter is well-known for his discovery of King Tutankhamun’s tomb in 1922. "We really wanted to showcase the Egyptian team, whose hard work has been overlooked for 100 years," says Oxford University Egyptologist Daniela Rosenow, co-curator of the exhibition. Burton P0770 © Griffith Institute, University of Oxford
In This Story
Destination Guide

The discovery made front-page news around the world: In November 1922, noted English archeologist Howard Carter unearthed the long-sought tomb of the Egyptian pharaoh Tutankhamun, apparently undisturbed in the more than 32 centuries since the king’s untimely death at 19 years old. Granted an exclusive tour the following month, a rapturous New York Times writer described objects of “rare beauty,” which “as works of art… reach a plane of excellence probably higher than has been reached in any subsequent period of the world.”

As told by the Times and other breathless reporting from the era, the story of King Tut’s tomb was just the thing to tickle the fancies of Americans and Europeans who had only recently emerged from the slog of World War I and the Spanish Flu. It had treasure, mystery, and tragedy. (The dig’s funder, English aristocrat Lord Carnarvon, would die shortly afterward from an infection that some attributed to a mummy’s curse.) And it had a romantic hero in the 48-year-old Carter, who, though essentially self-taught, brought modern scientific techniques to his years-long quest for the pharaoh’s final resting place. But what was missing, at that time and in the century since, was a true understanding of the role modern-day Egyptians had in uncovering their country’s history.

That’s one revelation of a new exhibition at the University of Oxford’s Bodleian Libraries, “Tutankhamun: Excavating the Archive,” which runs through February 2023 and showcases Carter’s letters, plans, drawings, and diaries, along with large-scale images from the excavation by Harry Burton, the Metropolitan Museum of Art photographer who was known as the top archaeological photographer of his era. While the excavation’s big anniversary may be celebrated elsewhere with a focus on gold and treasure, Oxford University Egyptologist Daniela Rosenow, co-curator of the exhibition and herself a longtime leader of archaeological digs, hopes this closer look at the discovery itself will prod viewers to consider not only the Englishman’s impressive accomplishment, but also the contributions of Egyptians themselves to what began as a colonial enterprise.

“Obviously we want to celebrate the centennial of this amazing event,” Rosenow says, “but we also want to interrogate it. Above all, we really wanted to showcase the Egyptian team, whose hard work has been overlooked for 100 years. A lot of them did very demanding physical labor, but others had their own expertise.” Carter had been working in Egypt for 30 years before unearthing Tutankhamun’s tomb, she notes, and in that time, he had come to appreciate and rely on the deep knowledge of local people, who had lived near the Valley of the Kings—where Tutankhamun and other pharaohs were laid to rest—for generations. “These people knew that territory,” Rosenow says.

Unfortunately, most of their names and stories have been lost to history. Carter mentions his trusted foreman, Ahmed Gerigar, in his diaries, and it is well-documented that the physician who performed the autopsy on Tutankhamun’s mummy was Saleh Bey Hamdi, the Egyptian head of a medical school in Cairo. But the dozens of workers who appear in Burton’s photos—excavating the tomb, lugging crates in the blistering heat, serving an elaborate picnic lunch to a group of Englishmen—go uncredited by name, as does the local boy who modeled Tutankhamun’s gold scarab necklace in a famous photograph that takes pride of place at the Bodleian show.

“The pictures are exquisite,” says Salima Ikram, a professor of Egyptology at the American University in Cairo, who has led digs in Egypt for decades. (She was not involved in mounting the Bodleian exhibition.) “They have been chosen and arranged so there is a twist on the narrative. They are bringing to the forefront not just the characters who are typically trotted out, but the workers and others who had a role in the dig. I think the average person will come away with something more than ‘ooh, gold!’”

The modern nation of Egypt had won its independence from the British Empire the February before Carter announced his pivotal find, and despite the British funder’s desire to bring Tut’s treasures to London, all of the 5,398 objects collected from the tomb remained Egyptian property. This year, the government is planning to open a new, $1 billion Grand Egyptian Museum, at which the contents of Tutankhamun’s tomb will be prominently, and permanently, displayed.

While the colonialist aspects of Carter’s excavation now lie squarely in the past, archeology has changed less than one might think, says Zahi Hawass, Egypt’s former Minister of State for Antiquities Affairs, who sits on the board of the new museum and who has worked to position Egypt as the rightful keeper of Ancient Egypt and its treasures. Hawass, a celebrity of Egyptology who has written more than a dozen books about Tutankhamun, has long sought the tomb of Queen Nefertiti, and he’s at work on a new dig not far from where Tutankhamun’s tomb was found. As in Carter’s time, the locals have proven an invaluable resource.

“They’re the descendants of people who worked with Carter,” Hawass says. “They tell me stories about him. In the past, they told archeologists about the locations of tombs. They still know the Valley of the Kings better than anybody.”

Locks from everyone, from Ludwig van Beethoven to Ulysses S. Grant.
objects of intrigue

Yale has acquired some of the Black photographer’s best-known images.
libraries

A Trove of Sad, Funny, and Familiar Stories From the 1918 Flu Pandemic

A UCLA librarian has built a remarkable collection of century-old letters, diaries, and photographs.
List

12 places to marvel at the history of human language.
Video • AO Docs