This Jelly Cake Captures the Wonder of the Cosmos - Gastro Obscura
Want to see fewer ads? Become a Member. 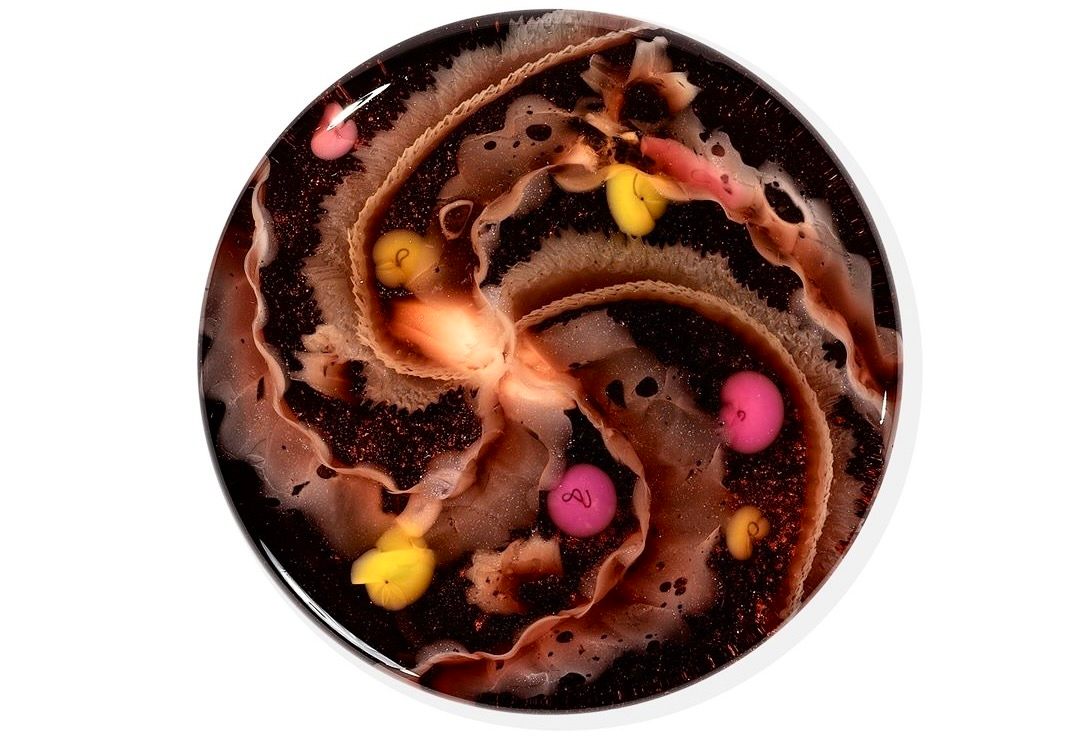 The Cosmos cake. Courtesy of Solid Wiggles
In This Story
Destination Guide

Like the best jelly cakes, The Cosmos appears at first glance to be an elaborate optical illusion. A Milky Way wrought in condensed milk jelly spirals out of its galactic center into shimmering nebulas of edible glitter. Although astronomers would not be able to identify the constellations suspended within the mirror-smooth dome, the overall effect is uncannily photorealistic.

“We were looking specifically at Hubble imagery,” says pastry chef Jena Derman, who, along with mixologist Jack Schramm, runs the jelly cakery Solid Wiggles out of a Brooklyn incubator for queer-owned businesses. “It’s so easy to make something that looks kind of cartoonish, so we were really trying to break away from that.”

Derman, like many of her contemporaries, first stumbled across gelatin cakes on YouTube in 2018. Jelly cakes long predate social media, yet feel tailor-made for the medium, which has allowed them to spread rapidly across the globe. The wobbly confections most likely originated in Mexico, where they remain a fixture at quinceañeras. From there, they migrated to Vietnam, where they are known as thạch rau câu 3D and contain everything from faux koi fish to flowers.

By now, cakes bound with gelatin or agar-agar are popular across Singapore, Malaysia, Thailand, Japan, and, increasingly, the U.S. and U.K. Popstar Olivia Rodrigo recently celebrated her birthday with a jelly cake by Los Angeles-based artist Lexie Park, and the judges on the 11th season of The Great British Baking Show challenged contestants to pull out the syringes. As with most viral trends, jelly cakes mutate rapidly, with pastry chefs twisting the formula in ways that range from the surreally beautiful—the coral reefs by Moscow-based Elena Terentyeva—to the gleefully macabre—the 13-pound edible babies embalmed in aspic by Guadalajara-based Yoly Navarro.

The genesis of The Cosmos in this case was a pun. Unlike most jelly cake-makers, Derman and Schramm offer boozy versions of all of their creations. At 5 percent ABV, their grown-up riffs on Jell-O shots reference classic cocktails such as the Garibaldi and the Paloma. “We thought it would be amazing to do a ‘Cosmo’ that looks like the cosmos,” Derman says. With a base of clarified cranberry-lemon juice jelly and acid-adjusted orange jelly, along with a nip of vodka, the flavor profile here mimics that fixture of the early Aughts cocktail scene.

From that first conversation, she and Schramm ran with it, leaning into the inherently mysterious nature of both their subject matter and medium. Much of the appeal of jelly cakes lies in their how-did-they-do-that quality. While other forms of patisserie betray hints of human labor, The Cosmos seems like something that could only be born fully formed from a magic trick.

The key lies in a high-powered centrifuge that can strip fruit juices of their solids, making for a perfectly clear base. Opaque milk jelly is then injected through the bottom of the cake via custom syringe-tipped knives that Derman likens to miniature bayonets. The warm jelly briefly liquifies the surrounding cold base, which then sets around it as the mixture cools. At the end, the stainless steel mold is warmed just enough to melt the exterior, giving the finished cake a glassy surface. No trace remains of the creator’s surgical artistry.

“There’s nothing actually exposed from the outside of the cake—it’s all happening internally,” Derman says. “I think that’s also what makes Jell-O cakes so beautiful. It makes it look like those glass coffee weights that maybe your grandmother had. It creates this whole little world that you can peer into.”

Driving a Muffin Car Is Fun (and Slightly Dangerous)

From futuristic test kitchens to Under-the-Sea Salad, midcentury Jell-O took a turn for the weird.
food

It took an international team (and Buckingham Palace).
Video • Wonder From Home