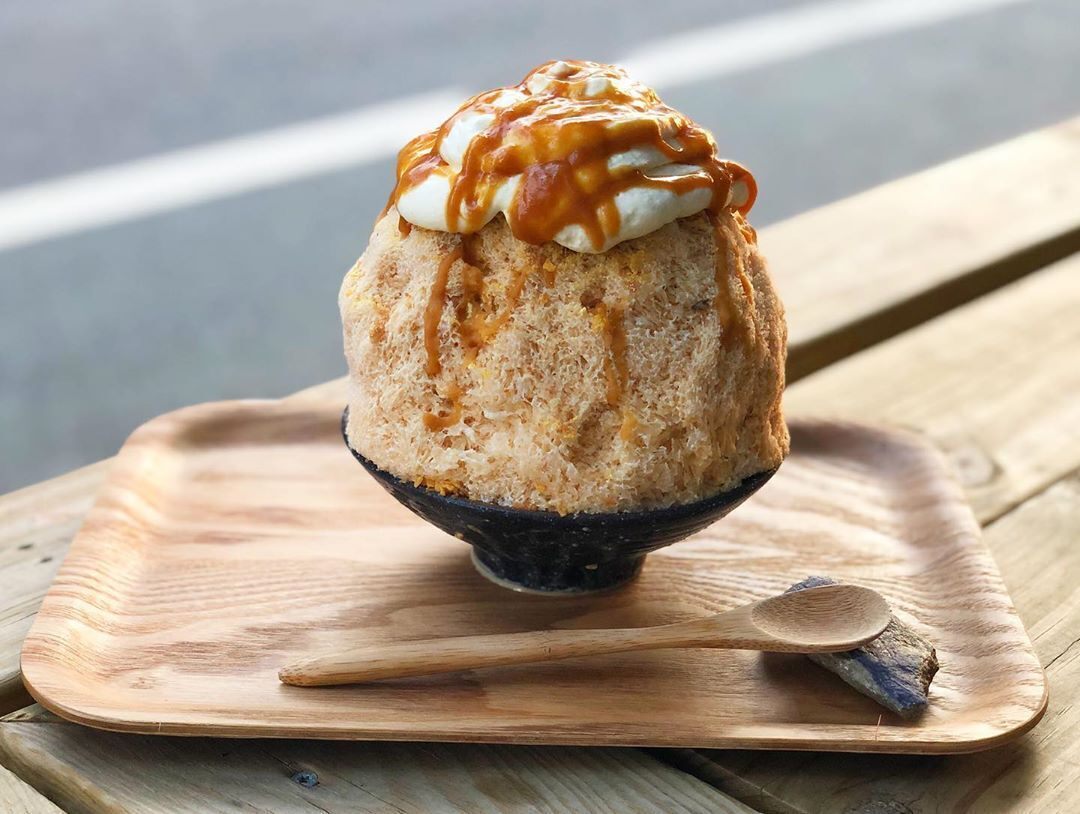 Kakigori, pictured here on the streets of New York City. i_am_cin/used with permission
In This Story
Food

A sundae with a surprising mix of flavors that reflect Filipino history.
Destination Guide

It’s not just shaved ice. Rather than ground or crushed, ice in proper kakigori is shaved on a razor-sharp plane so thinly it more closely resembles freshly fallen snow. Topped with condensed milk and flavored syrup, the rich, cold treat melts gently in your mouth, carrying more flavor than crunch. While kakigori is a common tactic in Japan’s annual war against natsubate, or “summer fatigue,” it was not always so. A delectable once enjoyed only by the hyper-rich, its current ubiquity is thanks, in part, to one 19th-century display of American gunboat diplomacy.

The earliest mention of kakigori comes from Sei Shonagon, a lady of the imperial Heian court who wrote in her early-11th century The Pillow Book of a silver dish of shaved ice, topped with tree sap and flower nectar. Dr. Eric C. Rath, a historian of premodern Japan at the University of Kansas, writes that the Heian aristocracy relied on special cellars called himuro to keep ice shipped from the frigid mountains of Hokkaido frozen. Without access to ice and requisite storage, those of lesser means told ghost stories to chill themselves, says Dr. Rath, or hung small bells with streamers from windows to sound the “cooling” of a light breeze. “It was a delicacy for the one-percenters,” says Nathan Hopson, Associate Professor of Humanities at Nagoya University.

This began to change in 1853, when a U.S. naval fleet comprised of four of the world’s deadliest warships arrived in Tokyo Bay. Commodore Matthew C. Perry carried a letter from U.S. president Millard Fillmore for Emperor Kōmei of Japan, which asked him to end a 200-year-old policy of isolationism and begin trading with the West. Michael Booth, whose up coming book Three Tigers, One Mountain explores Asian political relations, describes Perry’s arrival in Japan as “akin to [an] alien invasion movie. The ships were many times larger than anything the Japanese had.” The reaction onshore, as citizens viewed “black ships of evil mien” spewing clouds of black smoke, was one of horror. “The capital was thrown into a panic. Mothers ran about with children in their arms, and men with mothers on their backs,” wrote Arthur Walworth in Black Ships Off Japan.

The Perry Expedition was one of the first, but far from the last, exercises in American gunboat diplomacy. After stalling for a year, the Japanese received a second visit of nine vessels in 1854; the resulting Treaty of Kanagawa ended Japanese isolation.

Perry’s exhibition of military might had myriad unintended consequences. The Japanese saw Perry’s black ships as an existential threat. Made fearfully aware of the wider world’s technological advancements, Japan launched a modernization campaign, and a period of rapid social, economic, and military development ensued. Referred to as the Meiji Restoration, it earned Japan a formidable international reputation. Telegraph lines and railroads were laid, the first daily newspaper began publication, a national postal service was installed, and the Gregorian calendar was adopted.

Among this great wave of innovation, two advances helped promulgate kakigori. Capitalizing on the new railroads and infrastructure, food entrepreneur Kahe Nakagawa was able to ship ice harvested from the mountains of Hokkaido to the greater Tokyo area at a fraction of the expense once paid by the imperial Heian court. His Hakodate Ice company opened in 1872. Competitors such as the Tokyo Ice Company and Aoyama Ice Factory opened in the 1880s, offering artificially made ice and further driving down prices. An ice-seller named Hanzaburo Murakami then patented an ice-shaving machine in 1887 that could—relative to tediously shaving by hand—finely and rapidly shave the newly accessible ice. In the midst of this flurry of development, kakigori shops began opening in the Japanese capital.

But as Hopson writes, these first shops were not roaring successes. The Japanese had adopted many Chinese medical traditions which discouraged the cooling of the body. Skeptical of this ancient confection of the elite, most Japanese settled on cooling hacks of historic provenance, such as eating zaru soba (cold noodles) or grilled unagi basted with sweet sauce. Hopson says that, until recently, most iced drinks were still widely viewed with suspicion by older, more rural Japanese.

With each passing summer, however, Japan warmed up to the icy treats. By the “Meiji-20s,” or 1890s, kakigori was increasingly accessible to middle class families, says Hopson.

New traditions quickly emerged from the popularization of kakigori. Colorful banners called hyoki began flying over ice shops authorized for sale by the regulatory body, showing the symbol kori (ice) in red over a torrent of blue waves with green birds flying in the background. Their emergence in late spring became a harbinger of summer, much like American ice cream trucks. The popularization of homemade kakigori piggybacked on Japan’s earliest household refrigerators in the 1920s, leading to the birth of korikoppu: glass bowls designed to hold homemade kakigori. The world of haikus even recognizes the term kakigori as a kigo, or a synecdoche, to the summer season.

Today, the treat is “utterly ubiquitous,” Booth writes. Every season of matsuri, or summer festivals, brings about nuanced flavor combinations, sweet or otherwise. Ujikintoki is doused in matcha green tea and adzuki red bean paste; Shirokuma, meaning “polar bear,” is made to resemble the animal with an arrangement of fruit, condensed milk, and agar agar. Nancy Singleton, author of Japan: The Cookbook, says a shop near her home in Kamikawa-Machi sells a specialty miso-caramel kakigori. Per La Vita, an Italian restaurant in Shibuya, Tokyo, sells a tiramisu kakigori. Manhattan’s Bonsai Kakigori sells a Coconut Lime Crunch kakigori with toasted coconut and lime zest. Cousins of kakigori can also be found in neighboring countries such as Hawaii and the Philippines, where Japanese immigration brought the concept that evolved into the locally beloved shave-ice and halo-halo.

In a twist of historic irony, the newest technique in kakigori is one that allegedly produces harder blocks of ice that are both slower to melt and produce a finer, fluffier shave: In Heian fashion, it’s all the rage to source “natural ice” from mountain lakes and store them in sawdust to await the summer season.

New England Is Riddled With These Mysterious Stone Enclosures

Fans are finding new ways to celebrate the band during the 45th anniversary of their first arrival there.
museums

Half a century of menus, matchboxes, and postcards finds a home.
military history

The massive Lochnagar Crater, as seen from a satellite.
science

Climate change is turning a Cold War project into an environmental hazard.
Video

Come for the fish sundae, stay for the collection of Studio Ghibli cat buses.
Kyoto, Japan

One of Kyoto's oldest food establishments has supplied soba noodles to temple priests and the Imperial Palace.
Want to see fewer ads? Become a Member.
Related

Shinbun nishiki-e were the country's answer to penny dreadfuls.
Read more
Thanks for sharing!