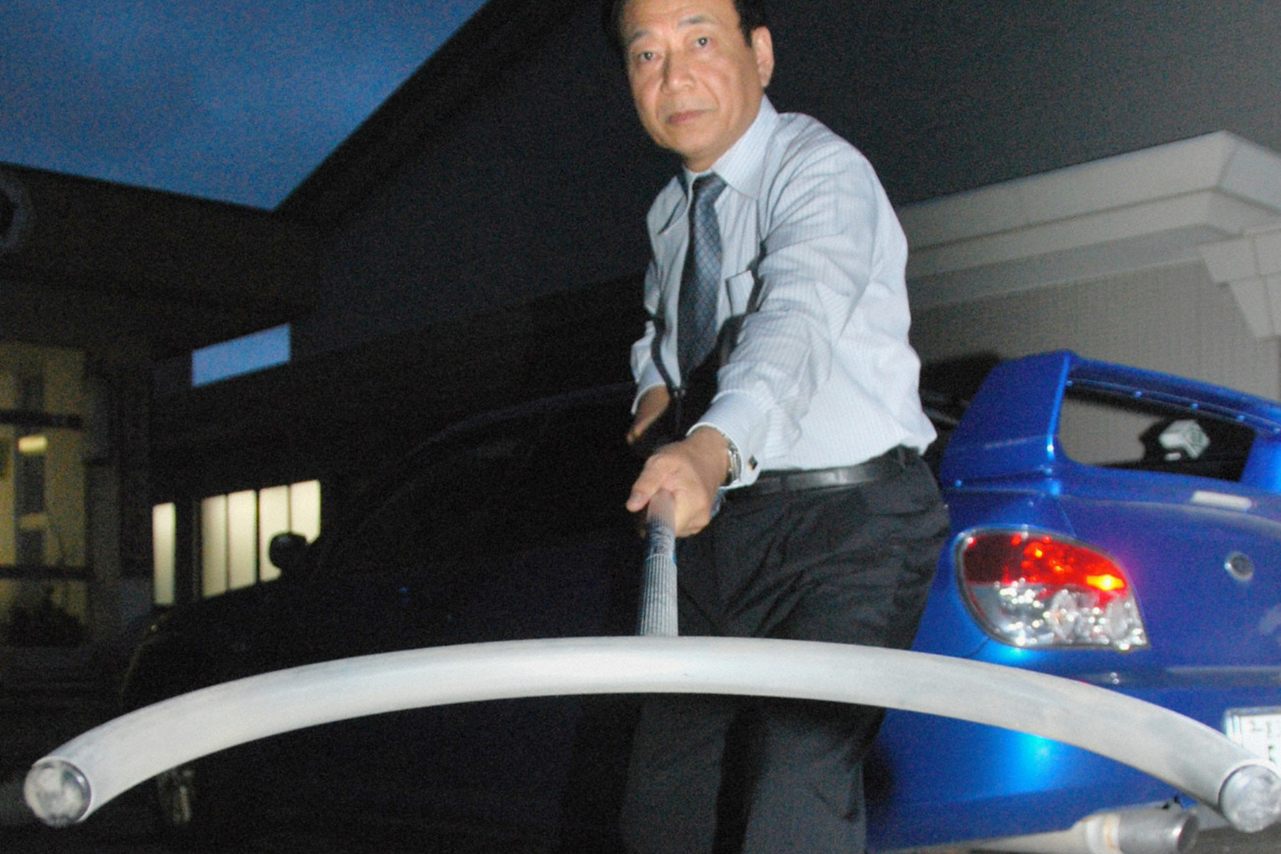 Hiroshi Igushi, principal of Kamiyama Elementary School in Ichinomiya, Japan demonstrates the use of a sasumata, the same day he actually used one to subdue an intruder. Kyodo via AP Images
In This Story
Destination Guide

“A man with a knife will come to the school today.” It’s not exactly the greeting one expects upon showing up to work. But this is what the vice-principal said on my arrival at the junior high school where I taught in rural Gunma Prefecture, Japan. It was time for the annual intruder drill, a common practice at schools across the country. Japan has a reputation for low crime, but the country is particularly vigilant about protecting schools and students. And one of the ways they do that is through regularly scheduled, tightly controlled armed brawls.

Violent crime is rare in Japan compared with other developed nations, but it has experienced a few tragic incidents targeting schools or students in the last two decades. In contrast with the United States, where gun violence is a concern of every school campus, violence directed at schools in Japan overwhelmingly involves knives, due in part to Japan’s strict firearms laws. Most infamous of these attacks occurred in Ikeda, a suburb of Osaka in 2001, when eight students lost their lives after a man with a history of mental illness attacked.

“What should not have happened did actually happen in Ikeda,”one mayor near Tokyo told The New York Times then.

China also saw a number of such incidents over a short span in 2010, during which time one also occurred in Yokohama. Responding dramatically to concerns over these threats, boards of education across Japan implemented a series of reforms in primary schools. Campus gates are kept locked during school hours, and security guards are often present during students’ arrivals and departures. In 2021, a small police station called a kōban was opened on the grounds of Sakura Elementary School in Osaka, believed to be the first of its kind. The local board of education declared it wanted the school to be “the safest school in the country.” Citizen patrols, including parents and other community volunteers, have also become common over the years. All told, as of 2018, 97.7 percent of schools in Japan had implemented some form of security measures.

“They are necessarily overreacting,” Kenji Ino, an official with Japan’s Ministry of Education, Culture, Science and Technology (MEXT) told the Times.

And among the security measures is perhaps the most unusual: full-contact drills in which school personnel take on a simulated intruder, using an impressive array of weapons. While the selection varies from school to school, nearly 97 percent of staffrooms in schools are equipped with sasumata: a two-pronged, nonlethal variation of a medieval man-catcher used to trap and hold intruders. Bo (wooden staves), nets, whistles, zip ties, chemical irritants, and even stun-guns and tear gas might be available as well, to be used as tools for the “Curtailment of violent behaviour and persuasion to leave,” according to the Office of Disaster Reduction Research, part of MEXT.

For these “intruder drills,” on a designated day each year, a trainer, often a local police officer, shows up at the school dressed in stereotypical, baggy “suspicious person” clothing—mostly a hoodie with sunglasses, with combat padding beneath—and carrying a cardboard knife. After scaring students in their classrooms a bit, the intruder is set upon by teachers working in squads, commonly divided into “seizure teams” and “relief teams.”

The seizure teams, using sasumata and improvised tools such as chairs, are tasked with immobilizing an intruder’s arms and legs. That was my role, along with the school physical education teacher and several other physically robust instructors. Directed to pin the intruder/trainer against a wall with the sasumata, I quickly found myself deposited on my rear. Not wanting to actually hurt the trainer, I had moved too gently, allowing him to wrench the sasumata from my hands.

The relief teams are instructed go after the intruder’s weapon with club strikes to the hands and arms. Others help to clear students to safety, relay information, and call the police. The whole thing is conducted at full-speed and full-contact. The drill often concludes with a schoolwide address by the principal and police officer–intruder—and, of course, mascots, lots of mascots—to reinforce the importance of emergency preparedness. Teachers also get a debrief.

Some schools tweak their approach to these drills when needed. One former elementary school teacher in Tokyo who now teaches in Miyagi Prefecture says that her former school took a more low-key approach to avoid frightening students. There, she says—on the condition of anonymity owing to civil service guidelines in Japan—the trainer kept clear of the classrooms and conducted the drill with teachers, quietly, away from students, “so that children do not feel great fear and become traumatized.” The kids did, however, later see a demonstration with police and staff afterwards in the school’s gym.

“Whether it is useful or not depends on the content of the training,” she adds. For example, a predetermined “success story” that is simply role-played from beginning to end is less than ideal. Free-form training, however—the sort where “I do not know what kind of actions the suspicious person will do”—is seen as more useful. Indeed, at Ikeda Elementary School, site of the 2001 incident, school administration and teachers are purposely kept in the dark about the intruder’s planned route during the drill.

But the drills have been effective. Recent years have seen a number of cases in Japan in which armed intruders have been successfully subdued by teachers using sasumata and other tools. Conversely, recently at a child-care center in Tome City—one that relied on tabletop exercises rather than live-action drills, and did not equip staff with sasumata—a knife-wielding intruder had to be confronted by staff using their bare hands at considerable personal risk. He was ultimately subdued and no one was injured.

Relics of outlaws, markers of status, and enforcers of social hierarchy, firearms are woven into rural life.
sports

Puzzle Monday: It's All Downhill

Unique experiences from Nairobi to Chiang Mai.
Want to see fewer ads? Become a Member.
From Around the Web
Atlas Obscura Trips
Artisans & Exiles: Exploring the Hidden Traditions of Japan’s Sado Island
View This Trip
Thanks for sharing!