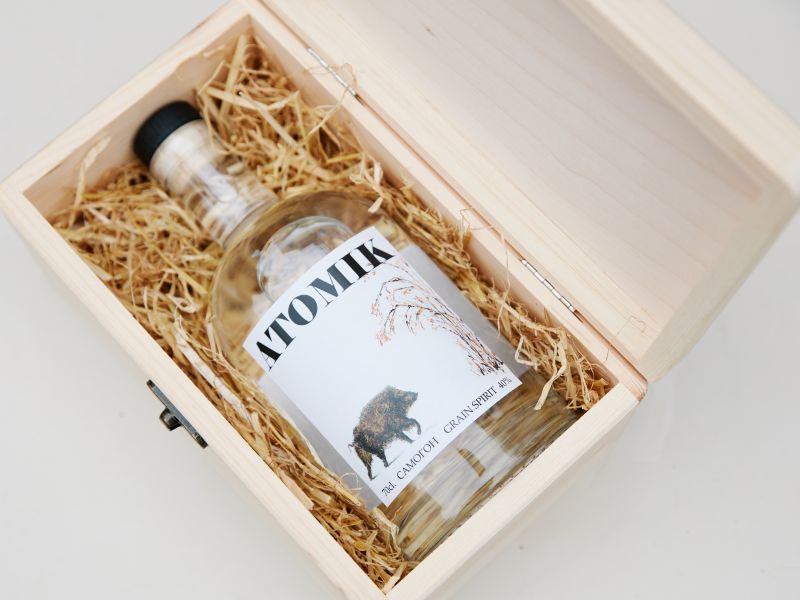 The Chernobyl Spirits Company has produced one lone bottle of the non-radioactive spirit. Courtesy of University of Portsmouth
In This Story
Destination Guide

A team of international scientists has produced a bottle of moonshine distilled from rye and water from the Chernobyl Exclusion Zone, and it won’t kill you. “Atomik” is the result of a three-year research project led by Dr. James Smith of the University of Portsmouth to evaluate grains planted within the 30-kilometer “Dead Zone” for radionuclides. In 1986, following the explosion of one of the city’s nuclear reactors, the area was deemed uninhabitable by humans for 24,000 years. With Atomik, Dr. Smith’s team aims to prove it’s not that bad.

According to Smith, radiation wasn’t the worst thing to happen to Chernobyl residents: The greatest radioactive harm came and went within weeks while up to 300,000 people were evacuated. Rather, as a 2005 report from the UN agrees, “the stigma associated with Chernobyl caused marketing problems and led to falling revenues” for the local economy. High unemployment and poverty stemming from this stigma still hamstring the communities around Chernobyl.

Smith became obsessed with Chernobyl while studying astrophysics in the 1990s, and stayed that way. “It’s a problem without a solution, [and] for a physicist that’s really interesting,” he says of revitalizing a region dotted with radiation. “You keep on learning more.” By harvesting grains within the Exclusion Zone and testing them against acceptable levels of radiation, the environmental science professor and his team hope to encourage Ukrainian authorities to green-light abandoned lands for agricultural use. “You don’t have to abandon the land,” team member Dr. Gennady Latpev told the BBC. “We can produce something that will be totally clean from the radioactivity.”

Of course, making liquor is different than growing vegetables. While the rye used in the production of Atomik did test positive for strontium, distillation removes water-borne impurities, making Atomik no more radioactive than any other moonshine. But the team also planted wheat and barley, and while the grains tested positive for trace levels of cesium and strontium, Smith says he would “quite happily” eat a loaf made of the grains, though he has no plans to commercialize it.

Atomik has already earned a resounding thumbs up from Ukrainian politicians. Oleg Nasvit, the Head of Ukraine’s State Agency for Exclusion Zone Management, said of the project, “We welcome this initiative to use abandoned lands to help local communities … whilst always putting safety first,” and of the moonshine, “I’d call this a high-quality moonshine … I like it.”

To date, The Chernobyl Spirit Company has produced one bottle of Atomik (“I tremble when I pick it up,” Smith told the BBC), and it’s not for sale. They plan to produce 500 bottles for commercial sale by the end of the year, while returning 75 percent of profits to the affected communities around the Exclusion Zone. Atomik looks to take advantage of the uptick in tourism that followed HBO’s May release of the miniseries Chernobyl, a coincidence that Smith admits “wasn’t a complete coincidence.”

How to Restore a Hermit Hut in the Idaho Wilderness

The Top Secret Military Base Hidden in Chernobyl's Irradiated Forest

The mysterious Cold War base is now an eerie, crumbling ruin.
disasters

The organisms, growing at the Ukrainian site amid invasion and occupation, may one day help keep space travelers safe.
disasters

Though the damage on La Palma in the Canary Islands is extensive, no lives were lost.
abandoned

The free how-to dispels myths and minimizes the hazards of hunting and hoarding these special specimens.
Video