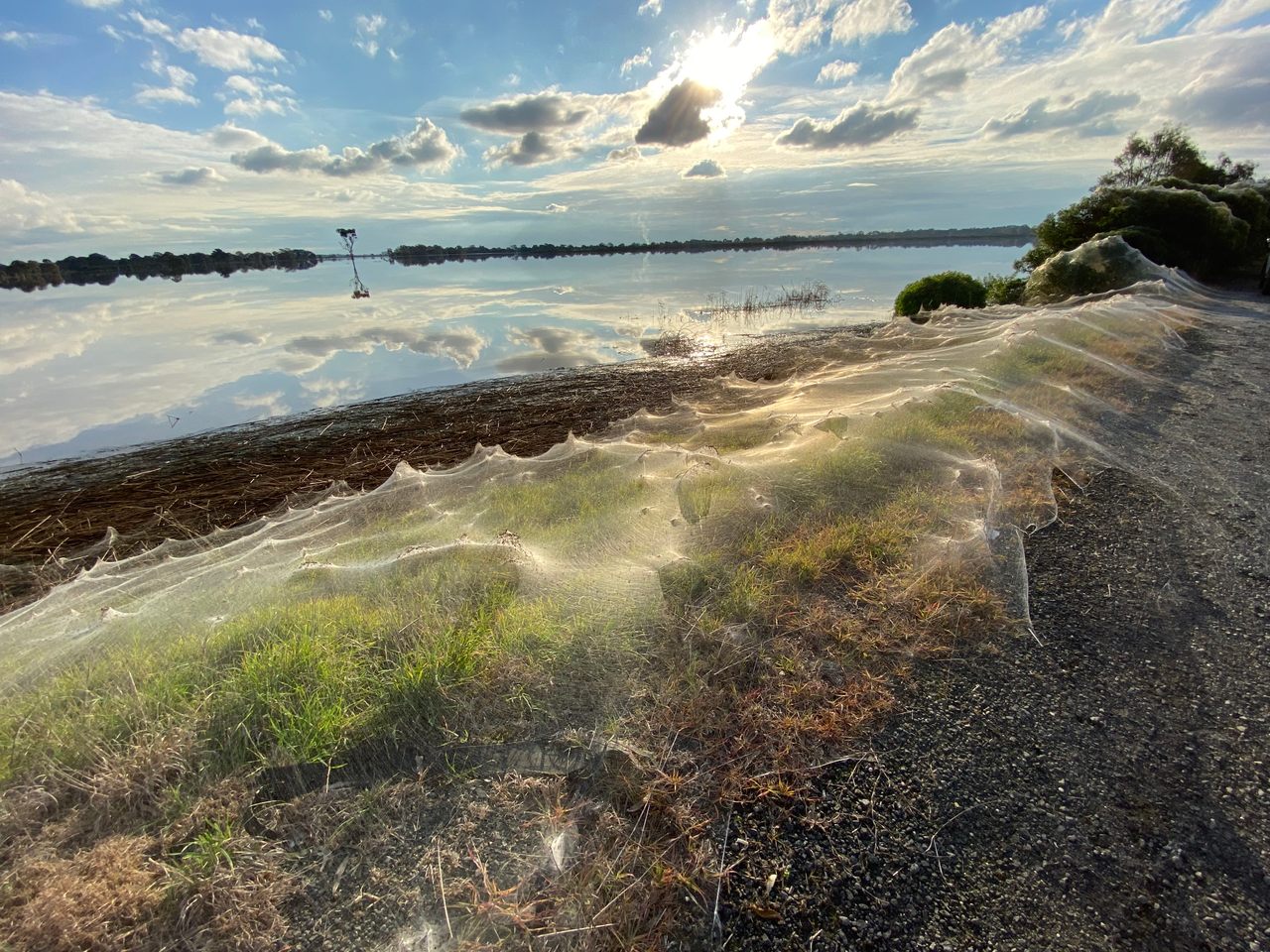 After heavy rains, spiderwebs covered part of Gippsland like a glinting blanket. Courtesy Carolyn Crossley
In This Story
Destination Guide

In mid-June, storms pelted Gippsland, a region in Victoria that cups part of mainland Australia’s southeastern edge. Wind downed trees, and water breached swollen riverbanks and pooled in streets. The weather snuffed out power at tens of thousands of homes. But after the rain, a bewitching sight appeared along the area’s soggy shores: It looked as if someone had draped the landscape with gauzy sheets.

They were white, thin, and fragile-looking, and appeared to have been placed gingerly, like fluffed veils. Through them, passersby could glimpse individual blades of grass. When tousled by wind, the sheets undulated like billowing fabric.

The silky sheets were actually a spider web—really, a whole bunch of webs woven by a whole bunch of spiders. “Because there are so many spiders making webs, the silk becomes like one gossamer blanket,” says Paula Cushing, senior curator of invertebrate zoology at the Denver Museum of Nature & Science, and a past president of the International Society of Arachnology.

On June 14, four days after the storms began, Wellington Shire Council member Carolyn Crossley ventured out to survey a flooded wetland between the communities of Sale and Longford. A causeway had recently reopened, and Crossley wanted to check it out. “It can be a magical view in a flood, and it was,” Crossley says. There, Crossley found the webs affixed to nearly everything—trees, signs, fence posts, cars, herself. “I brought one back into the car with me,” she says.

Such expanses of silk have been spotted before, according to Cushing, including in Texas and Pakistan, and they typically follow a flood.

Floodwaters lead to a bumper crop of insects, such as midges, caddisflies, mosquitoes, and mayflies, and also flush ground-dwelling spiders out of their homes or hunting grounds in leaf litter or low vegetation. The silk ensnares the surge of potential prey, Cushing says, and also serves as a ladder of sorts for spiders scrambling for drier ground. “It is very likely a method of escape,” says Caitlin Creak, a graduate student at the Evolution & Ecology Research Centre and Centre for Ecosystem Science at the University of New South Wales.

While some spider species can spend hours or even days submerged, says Creak, many can’t—and when they need to get moving to avoid drowning, some use a tactic called “ballooning,” which entails “releasing a light thread of silk into the wind and letting it carry them away.” Judging by Crossley’s photos of the event, the blanket seems to have been made by members of several web-spinning species, Cushing says. That’s not unusual: When floods sloshed into spider habitats in Finland in 2012, at least 13 spider species were found to have ballooned their way up into the vegetation. The Gippsland balloonists, according to University of Sydney ecologist Dieter Hochuli, speaking to an Australian news channel, may be members of a family known as sheet web spiders, which build horizontal webs and are found across Australia and New Zealand.

Ballooning can be a safer strategy than climbing up a leaf or branch, explains Ken Walker, senior curator of entomology at Museums Victoria. The airborne escape is efficient for a creature with no time to waste, and avoids the problem of running out of real estate if the water keeps rising. If the silk eventually anchors to vegetation “like a grappling hook,” Walker says, the spider can easily climb to safety.

Sometimes, ballooning silk can turn into a long haul: If it lofts a spider high enough in the air to catch a good gust, the creature can blow dozens of miles, or more, says Walker. The gossamer blankets of Gippsland, Creak says, appear to be the result of the wind dropping scads of flood-fleeing spiders into the same place, though it’s difficult to say for sure. Spiders produce several different types of silk, and from these photos, Cushing says, it’s impossible to tell dragline silk (a web-building variety that also allows spiders to dangle) apart from a type used to capture prey. But Cushing suspects that, after fleeing the water, the spiders also made webs to enjoy an insect buffet.

They probably weren’t the only ones feasting. While photographing the spider hordes, Crossley spotted some birds canvassing the area. “I’m sure a few had spider dinner,” she says. The blanket itself was gone in a few days. The silk disappears fairly quickly, Walker says, dismantled by wind, rain, and time.

Cushing reckons that as the water recedes and the insect bonanza dwindles, the spiders disperse or return to lower ground—but it’s hard to say for sure. “The problem is that, although reports emerge about these mass web incidents associated with flooding, there is not often a follow-up report focused on what happens post-flooding,” Cushing says. Wherever the Gippsland spiders went next, their wondrous escape routes weren’t built to last.

Beavers can reshape the North American ecosystem—if we let them.
science

And that's bad news for the snails that produced them.
holiday

Don't forget about Big Al the Alligator and Scramble the Duck's predicting powers either.
caves

Scientists know people were in Yukon 24,000 years ago. But what were they doing there?
Video • PinDrop