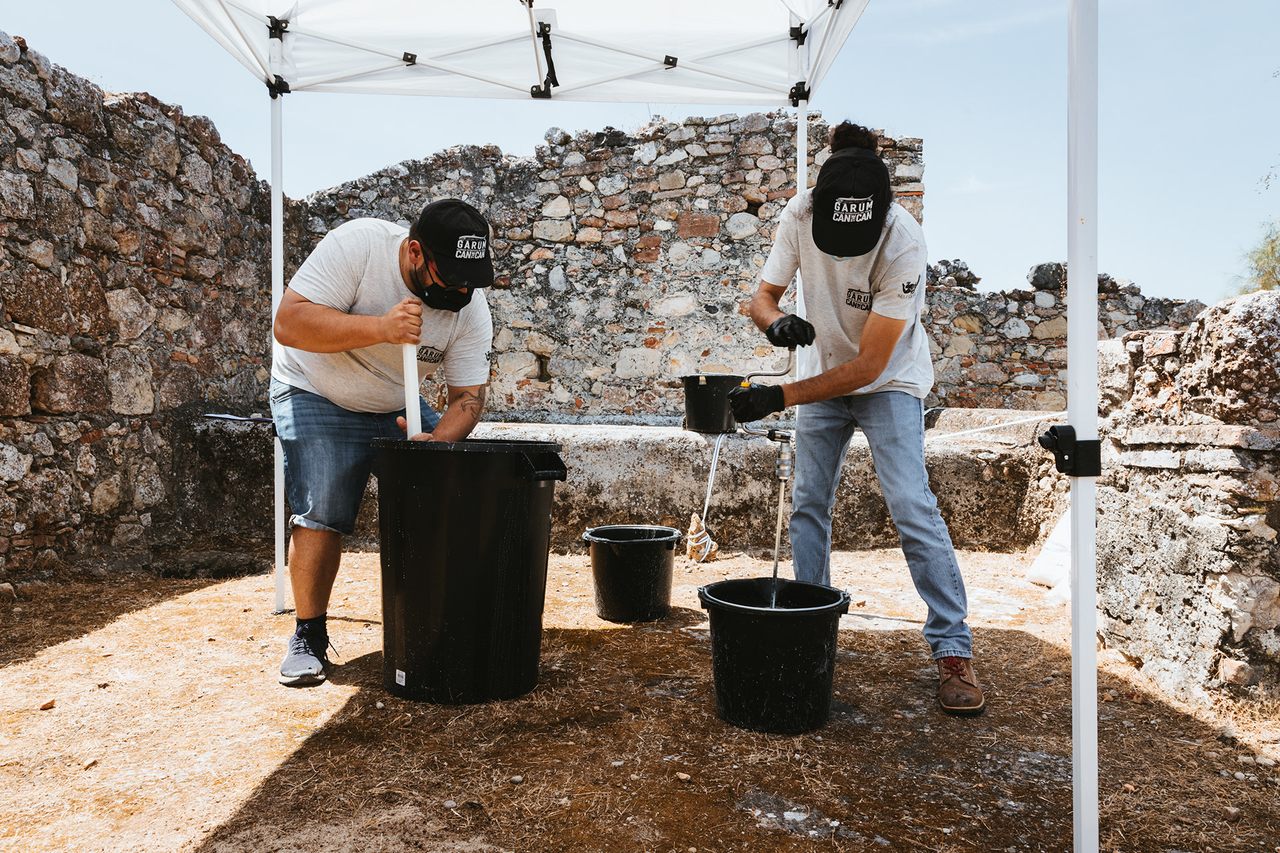 On a sunny day in May, a dozen people met in the Roman ruins of Troia, in what is now Portugal, with a recipe. The ingredient list? 400 kilos of sardines, 150 kilos of sea salt, and 350 liters of seawater. The group included archaeologists, nutritionists, palynologists, ichthyologists, and, of course, one skilled chef. They had assembled to experimentally recreate garum, the ancient fish sauce of the Roman Empire, just as it was originally produced.

The group patiently gutted the small fish with two or three cross-cuts, threw them into ancient stone tanks, and covered them with brine made by combining the salt and seawater with a metal paint paddle. Their goal was to return garum to the Portuguese diet.

“The rescue of this part of our history can reconnect us with the way we ate in this land centuries ago,” says chef Pedro Almeida, one of the members of the Garum Lusitano, or Portuguese Garum, project. Troia, a quiet peninsula on the southwest coast of Portugal, is best known as a family summer destination. But some 2,000 years ago, it was an important economic engine for the Romans.

The site of Troia produced literally tons of the stinky and delicious sauce that shaped Roman palates—and that filled thousands of amphorae shipped to Rome and other provinces. Similar large-scale sites existed in North Africa and Spain. But none was as crucial as the 13-mile-long, narrow, sandy peninsula, which provided all the raw materials needed for what researchers consider the most prominent fish-salting production center of the Roman Empire currently known. They have identified 200 visible tanks distributed in 29 salting factories with a production capacity of 1.4 million liters, and they estimate the complex produced twice as much between the 1st and 5th centuries.

Using historical sites and archeological evidence to bring ancient recipes back to life is nothing new. Among other projects, historians and archaeologists have partnered with brewers and chefs to recreate a beer made with yeast found in a 3,000-year-old jug and a lamb-and-beet stew that dates back to the Babylonian times. But recreating Roman garum has a particular purpose: The archaeologists excavating Troia want to understand why one of history’s essential foods disappeared from European eating habits.

The Portuguese Garum Project began when Inês Vaz Pinto, one of the leaders of the archeology department, heard that the team behind Lisbon’s famous restaurant Can The Can was producing garums in their kitchen. She contacted chef Pedro Almeida and Victor Vicente, a designer and researcher in gastronomic history, with an irresistible invitation: She proposed they swap the five-liter plastic containers in the restaurant’s pantry for the ancient fermentation tanks used by the Romans to ferment garum.

“The proportion has changed a little bit,” Almeida says with a laugh. “We have already made many garum experiences in the restaurant, and although we had good results using oysters, mackerel, and even sardines, it has been a whole new experience working with the Troia team.” Working directly with the Troia archeologists meant a big step up in historical accuracy.

Since 2019, when he took over the Can the Can kitchen, Almeida has focused on seafood sustainability, featuring forgotten or overlooked species on the menu and using the whole fish in his preparations, especially for charcuterie, such as tuna pastrami or swordfish bacon. He started making garum due to a specific challenge: finding a way to also use fish entrails in his cooking. While diners may not clamor for these parts of a fish, the powerful taste of garum has led to a revival in some fine-dining restaurants.

Garum is usually made just from small fish, although recipes changed over the centuries to include various aromatic herbs, spices, or even wine. The designation garum, though, generally defines fish sauces obtained from natural fermentation in brine. The microorganisms and enzymes present in the fish are crucial to the decomposition process that produces garum’s robust flavors. Just a few drops of the thick liquid can transform a food. In essence, it is the process of decay that gives garum the delicious umami flavor that addicted generations of Romans.

“It is curious because, in Eastern countries, these types of fish sauces remain an essential condiment for many recipes,” Almeida says. “While in the Western world, despite the established tradition, many people turn up their noses at the idea of a ‘rotten sauce.’”

Since there are no precise notes on how Romans produced garum—historical books never detailed the ingredients or proportions—the team relied on scientific data: a dose of archeology, a pinch of palynology (the study of plant pollen), and a dash of culinary knowledge.

When they dug into the tanks in Troia, the researchers found a thick layer of fish remains at the bottom, usually an immense amount of disarticulated bones with thousands of vertebrae. The predominant species was the sardine, in proportions up to 90 percent.

Given that the original tanks have worn walls, with cracks, mosses, and lichens, they opted to use a polypropylene bag (with 1,000 liters of capacity) in contact with the stone walls, thus absorbing their heat. As it is also implied by some documents that Romans covered their tanks with mats, allowing full contact with the air, the team decided to leave the bag partially open.

Late May was chosen for its ideal garum-making temperatures, as well as sun exposure and humidity. It’s also the time of year when Romans produced garum. But it will be months before the researchers will get to do any taste tests. “Our forecast is for the end of September,” says Pedro Almeida. “In the restaurant, with controlled temperature, I can reach the result in three months. In an open environment, we will need more time.”

Until then, the Garum Lusitano team will analyze the evolution of the first modern garum produced in Troia. “So far, the fermentation process has gone very well,” says Almeida. “The sauce is thickening, and the smell is great.” The archaeologists have already applied for public funding to expand the recreations in Troia.

Almeida has created several garum dishes in his restaurant, such as a steak and lamb tartare with oyster garum. He’s not yet decided on a recipe for the Troia fish sauce. But with the garum coming straight from an ancient archeological site, he hopes the experience will arouse the interest and curiosity of diners. His kitchen is only 30 miles from the site, so no amphorae or boats will be necessary this time.

This was no cozy nook.
ancient

Eat like a first-century Roman, using recent archaeological discoveries as your guide.
restaurants

Researching traditional foods led them to the revelations of an archaeological dig in Kentucky.
ancient

How to Reconstruct an Ancient Meal From Dirty Dishes Alone

Ring the bell to enter a bar that looks equal parts museum and old curiosity shop.
Want to see fewer ads? Become a Member.
From Around the Web
Atlas Obscura Trips
Secrets of Italy: Rome to Venice
View This Trip
Thanks for sharing!