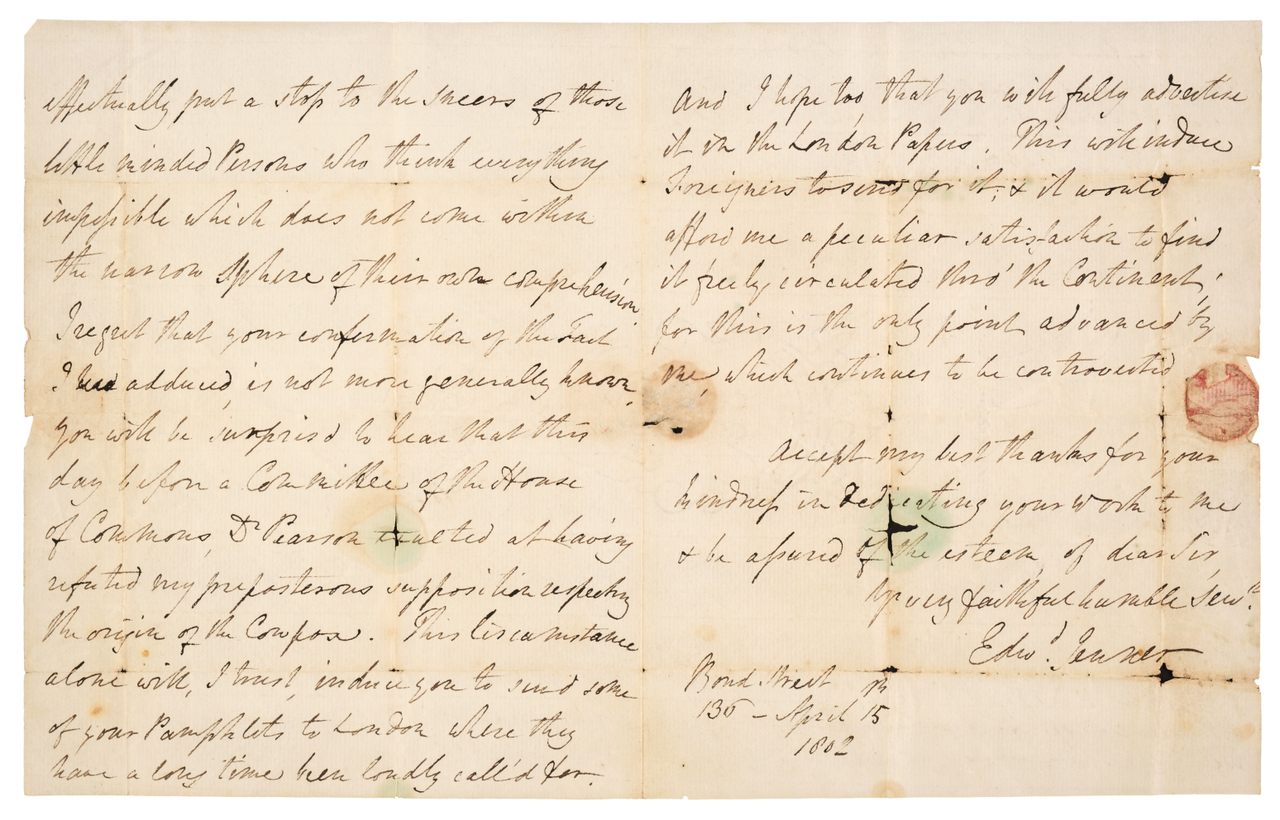 Though he lived and worked in the 18th and 19th centuries, the English physician Edward Jenner might have felt right at home in the culture war currently being fought over COVID-19 vaccines. Sometimes called the “Father of Immunology,” Jenner complained in harsh terms about those who opposed his theories, calling them “those little minded Persons who think everything impossible which does not come within the narrow sphere of their own comprehension.”

That particular jab comes from an 1802 letter that Jenner sent to John Glover Loy, a fellow physician in whom Jenner saw an ally. The letter, which details the work both men were doing on smallpox immunization, was recently sold by Dominic Winter Auctioneers in the United Kingdom for £7,000, or just under $10,000.

Jenner’s major innovation had come years before he wrote this letter, in 1796. Noting the common observation that dairy workers rarely contracted smallpox (also called variola), Jenner inoculated a patient with pus taken from a dairy worker infected with cowpox (a related but milder virus found in animals). Months later, Jenner “variolated” the same patient, exposing him to the deadlier smallpox virus. The boy did not experience any symptoms, which Jenner took as a sign that the cowpox had protected him, just as it protected dairy workers. The experiment marked the birth of modern vaccination—a word derived from vacca, Latin for “cow”—as a safer alternative to variolation, which had been practiced for a longer time at higher risk to patients. By some estimations, as the founder of vaccines, Jenner is responsible for saving the most lives of any human in history.

In 1798, Jenner published An Inquiry into the Causes and Effects of the Variolae Vaccinae, a disease discovered in some of the western counties of England, particularly Gloucestershire and Known by the Name of Cow Pox. (The publication followed a 1797 report on his findings that he submitted to the Royal Society, which rejected the paper.) In the Inquiry, Jenner explained that he believed cowpox originated with horses before it was transmitted to cows, which explains why he found Loy’s work compelling. In an 1801 publication, Loy described his finding that people infected with horsepox, also known as “grease,” exhibited lesions identical to those from cowpox, and were often similarly protected against smallpox. His findings supported not only Jenner’s theories about the origins of cowpox, but also the practice of “equination” with horsepox as a possible alternative to vaccination. (Equus is Latin for “horse.”)

“I know of no Production on the Vaccine subject which has afforded me more satisfaction, since it was first brought before the Public, than yours,” Jenner wrote to Loy in this letter. “I regret that your confirmation of the Fact I had adduced,” he continued, “is not more generally known. You will be surprised to hear that this day before a Committee of the House of Commons, Dr Pearson exalted at having refuted my preposterous supposition respecting the origin of the Cowpox. This circumstance alone will, I trust, induce you to send some of your pamphlets to London where they have a long time been loudly call’d for and I hope too that you will fully advertise it in the London Papers.”

José Esparza, a virologist at the University of Maryland School of Medicine who has published on the subject of equination, called this previously unpublished letter a major addition to Jenner’s known writings. (The letter comes from the Loy family’s private collection.) “This is probably the best available evidence that Jenner privately continued sponsoring the horsepox hypothesis,” Esparza writes in an email, despite the fact that Jenner had “stopped talking, at least publicly, about horsepox as the origin of the vaccine.” In Esparza’s view, “Jenner was attracted to the story of the milkmaid and thought that it was a good story to promote vaccination…. It was a marketing thing,” he writes, that led to equination’s demise and the confirmation of “vaccination” as the term still used today; equination itself “was never formally discredited.”

Of course, today, vaccines don’t require any connection to cows in order to qualify for usage or appeal to patients. Jenner’s experiments with the dairy workers, however—and the ultimate triumph of that narrative over data collected from horses—highlights the centrality of storytelling to medicine. If that weren’t so, we may well have found ourselves racing to “equinate” our way out of the COVID-19 pandemic.

NASA accidentally sold it, tried to take it back, lost it in a court battle—and now you can own it.
objects of intrigue

Cagey about his methods, John Wallis was a bit of a cipher himself.
plague

His scribbles—which mention the curative power of toad vomit—sold for $81,000.
Video • Wonder From Home