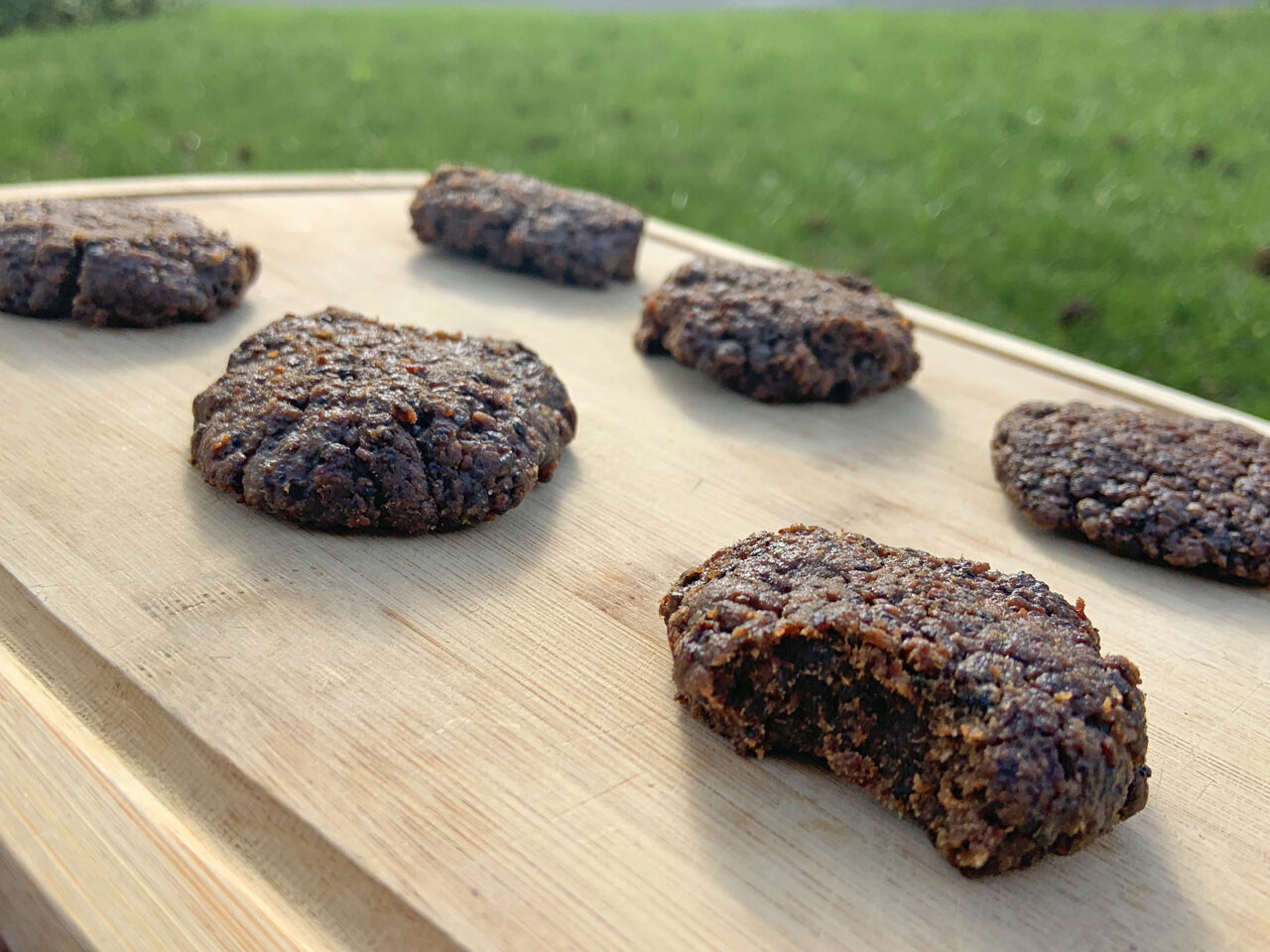 These patties were once the core of what historian George Colpitts calls a "high-calorie energy regime." Sam O'Brien for Gastro Obscura

In Secrets of Polar Travel, explorer Robert Peary spends several pages waxing poetic about the merits of a ration he brought on his expeditions to the Arctic between 1886 and 1909. In addition to ranking it “first in importance” among his supplies, he genuinely enjoyed the food, writing that it was the only meal “a man can eat twice a day for three hundred and sixty-five days in a year and have the last mouthful taste as good as the first.”

Peary was talking about pemmican, a blend of rendered fat and powdered, dried meat that fueled exploration and expansion long before his attempts to reach the North Pole. Archaeological evidence suggests that as early as 2800 BC humans hunted the bison that roamed North America’s Great Plains and blended their meat, fat, and marrow into energy-dense patties with a serious shelf-life. A single pound of pemmican lasted for years and might’ve packed as many as 3,500 calories.

“Pemmican is a legit ancient indigenous energy bar,” says Shane Chartrand, a chef from the Enoch Cree Nation in central Alberta. Chartrand’s cookbook, tawâw (which, in Cree, means “come in, you’re welcome, there’s room”), contains a recipe for salmon-based pemmican, but he believes the food’s value lies in function more than flavor.

“Some things are not meant to taste good; they’re meant to make you survive. I’ve hunted all my life. When you’re way out there and you’re starving and you can feel your body breaking down and you’re tired and your sugars are low, it doesn’t matter if it tastes good. You want something that helps you live and helps you keep moving. That was pemmican.”

Archaeologists theorize that it was pemmican’s ability to help early Plains cultures keep moving that allowed them to spread and develop into the many indigenous groups that exist across the Northern United States and Canada today. As different cultures—from Cree to Ojibwe to Blackfoot to Sioux—made their own versions over subsequent millennia, names and recipes varied. Most makers used bison, while others opted for venison or fish. Some blended in dried chokecherries or saskatoons, while others cooked the final patty into a stew known as rubaboo. The end result was always high-octane, easily-portable nourishment.

By the 1770s, pemmican had attracted the attention of fur-trading companies that were expanding across British-controlled Canada. As voyageurs burned massive amounts of calories paddling canoes loaded with goods, they turned to pemmican to replace their inadequate corn-heavy diets. The Métis, a community of skilled bison hunters descended from French voyageurs and their indigenous wives, dominated the pemmican trade. In the early 1800s, the food became such a coveted commodity that actual battles over access—known as the Pemmican War—broke out between fur traders, settlers, and Métis. But pemmican’s popularity would be its undoing. By the 1880s, overhunting had caused the near-extinction of the American bison and, as a result, the decline of the food itself.

Some indigenous communities still make pemmican today, though, and it’s not difficult to make your own. The below recipe simply requires lard, meat, berries, and the patience to wait while the ingredients dry. While modern diners might not find themselves as enamored as a delicacy-deprived hunter or explorer, the slightly sweet-and-savory result offers a glimpse into the flavor and fuel behind North America’s original energy bar.

Inspired by the Recipe From FirstNations.org

Whatever you choose for your meat, make sure it’s lean. Remember that it’s going to shrink as it dries (condensing nourishment into a smaller package is one of pemmican’s greatest qualities). For instance, about 1.5–2 pounds of raw beef will yield about 1.5–2 cups when dried. Cut against the grain into strips (chilling the meat in the freezer for an hour beforehand makes for cleaner cutting), lay out on a sheet, and place in an oven preheated to its lowest setting, typically around 170 degrees Fahrenheit. Depending on the thickness of your meat, it could take up to 12 hours to fully dry. You’ll know the meat is ready when it’s dry but still pliable.

For anyone who thinks buying beef jerky is a nice shortcut, think again: As historical-food re-creator Jon Townsend points out, commercial jerky has preservatives such as nitrates, which will negatively alter the final flavor, and it’s cut with the grain, which will make it more difficult to grind the meat into a powder.

Chokecherries or saskatoons are the most traditional choices, but blueberries, cranberries, and most other berries will also work. If you have fresh berries, you can either use a food dehydrator or an oven set to low heat. Depending on your equipment, times for drying out the berries can vary greatly, from several hours to a full day. If using an oven, break the berries’ skins (slicing or poking holes works fine) to allow their juice to evaporate. Keep an eye on them. You’ll know they’re ready when they’re completely dry with no juice left.

If you don’t have lard lurking in the fridge, you can buy it premade or make it yourself. The first option is easier, but requires some sleuthing, as many prepackaged lards use unhealthy preservatives. Look for non-hydrogenated options.

But if you want reliably high-quality lard, you should make it yourself. Order some fatback or leaf fat from your local butcher. (Call ahead to see if there’s a way to arrange safe delivery or pickup. They won’t find it weird if you ask for a big batch of fat. People use lard for a multitude of reasons, so they’ve likely done this before.)

As with the meat, briefly chill the fat in the freezer, then cut it into small cubes. Place the fat in a slow-cooker or a pot on the stovetop with ¼ cup of water. Both should be set to low. The process typically takes two to four hours. Periodically check the pot, stirring occasionally. You’ll know it’s ready when most of the cubes have liquified. Filter out any cracklings with a strainer and cheesecloth or paper towel, then place the liquid in an air-tight container. Leave out at room temperature until it starts to set, then move to the refrigerator.

Now it’s time to make your meat powder. Grind the dried meat in a food processor or, if you want to approximate the traditional method of a pounding stone, get your hands on a mortar and pestle. Repeat with the berries and combine the powders in a bowl. Melt 2 tablespoons of lard, then add to the bowl and mix until it’s sticky enough to be formed into patties. Add another tablespoon of lard if the mixture is still too powdery. If you’d like to add sugar, use about one tablespoon. Shape into patties and let dry.

The results won’t be beautiful, but appearances don’t seem to stop anyone from eating today’s bland-brick energy bars. Grab a piece of pemmican and savor the flavor of one of history’s oldest enduring meals.

A Cloud Gazer's Guide to Every Fluffy Thing in the Sky

With advice and recipes from a renowned expert.
food

Researching traditional foods led them to the revelations of an archaeological dig in Kentucky.
food

Eat Like a 19th-Century Shaker With This Simple Lemon Pie

This French Canadian classic is a specialty of the oldest continually used church in Minneapolis.
Gastro Obscura

As fine as the marble it's cured in, this pig fat salumi is a Tuscan masterpiece.
Gastro Obscura

Sandwiches stuffed with wine-and-cinnamon-spiced sausage have been a specialty of Michigan's Upper Peninsula since 1936.
Related

The specialty is usually pink, but it looks different around Boston.
Read more
Thanks for sharing!