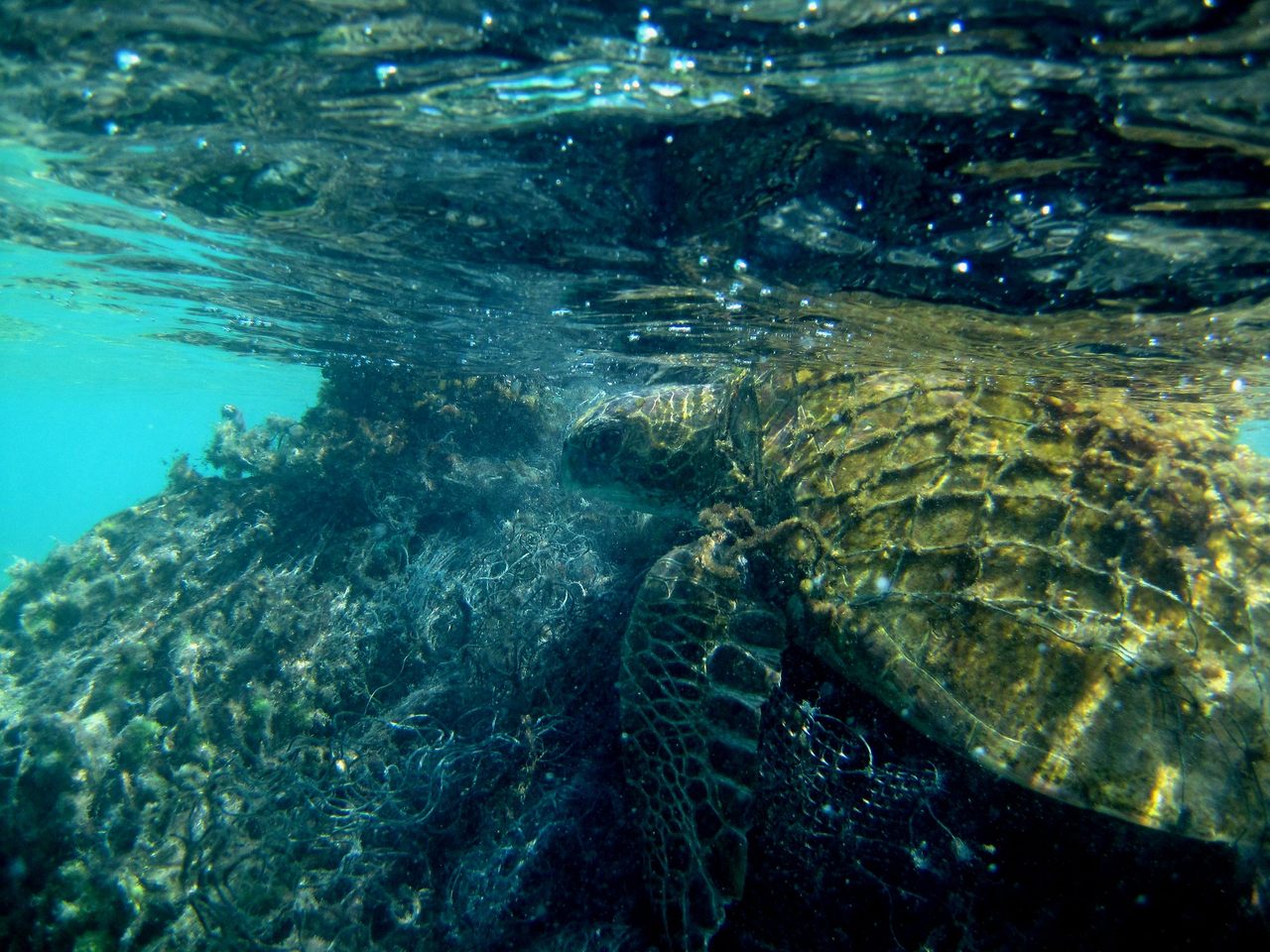 In 2016, Edgardo Ochoa came to Panama to bust some ghosts. The government had just received a report that a monstrous abandoned fishing net—known as a ghost net—was entangled in a coral reef in Coiba National Park, a prison-island-turned-marine-preserve popular with nesting sea turtles. When Ochoa arrived, he saw that the ghost was over 150 feet long, its nylon lattice stuck to jutting mounds of coral like a too-tight hairnet, snagging animals as it was dragged to and fro in the waves. The water was shallow, so from his boat, Ochoa was immediately able to spot the bodies of trapped fish and snails—some alive, some dead.

It took Ochoa and a team of at least seven other divers two days to remove the net, by cutting it into smaller sections that could be hauled up to the surface with minimal damage to the reef. Every six hours, as the tide changed, the net collected more passing critters and debris. At one point, Ochoa found the body of a female sea turtle the size of a laptop. “I’m pretty sure she died because she couldn’t reach the surface and breathe,” he says.

Ghost nets haunt oceans across the world at every possible depth. They linger at the surface, dangling from buoys and enmeshed in coral reefs, and they collapse to the seafloor, knotted in wrecks and snagged in the ribs of decomposing whales. As with anything abandoned or lost, no one knows how just many there are. But there is a seemingly infinite supply of these wraiths, which trap anything that swims by like flypaper, dooming them to starvation, suffocation, or predation. “They just sit there and fish, and kill and kill and kill and kill,” sea urchin diver Mike Neill told NBC News.

In his work as a marine safety officer for Conservation International, Ochoa encounters a lot of ghost nets, which fall under the larger umbrella of “abandoned, lost, and discarded fishing gear” (ALDFG). According to a 2016 report from the Food and Agricultural Organization of the United Nations, ALDFG comprises close to 10 percent of the world’s total marine debris. Ghost nets are thought to make up at least 46 percent of the total mass of the Great Pacific Garbage Patch, that eternally swirling vortex of litter somewhere between California and Hawai’i, according to a 2018 study in Nature.

Ghost nets aren’t quite like any other kind of plastic pollution in the oceans. They’re larger, more spread out, and much harder to remove than smaller, more discrete items, such as trash bags and water bottles. And unlike those plastics, ghost nets are rarely discarded on purpose. “Most of the time gear costs a lot of money, so they’re not abandoned intentionally,” says Laurent Lebreton, an oceanographer studying ghost nets for nonprofit The Ocean Cleanup, and author the Nature study. They might have been damaged and snagged by a nearby vessel, or lost in a storm, which can make it dangerous to attempt to retrieve them at the time. They also might be intentionally abandoned by illegal fishing operations, if they happen to spot the authorities in the distance.

And ghost nets, by their very nature, are a threat to just about every kind of marine life. They pose a particular threat to air-breathers and larger animals such as whales and dolphins, who can be hopelessly tangled and, like Ochoa’s sea turtle, die of drowning. But the nets are indiscriminate, just as easily sweeping up less-charismatic species and the cornerstones of fisheries. Some ghost nets designed to catch certain kinds of fish will just go on doing it, a phenomenon is called ghost fishing, Ochoa says. This attracts scavengers, who get caught themselves. The nets also clog up waterways, making it harder for vessels of any kind to pass through.

Humans have fished using free-floating nets for centuries, but in the past they were made of biodegradable materials, such as bamboo, that break down quickly at sea, Lebreton says. But ghost nets today are almost exclusively made of plastic and nylon, and can take up to 600 years to degrade (into microplastics). They cross entire oceans, often with unintentional stowaways, from crabs to microbes that might endanger ecosystems in ways no scientist currently understands, Lebreton adds.

It’s clear that ghost nets need to be removed from the ocean, but there’s no obvious way to do it. After encountering countless ghost nets at Conservation International, Ochoa has developed a ghost-net-removal course in collaboration with the Professional Association of Diving Instructors (PADI), an international organization that teaches and certifies scuba divers. “There are more than six million active recreational divers worldwide,” Ochoa says. “No one has time or resources for a massive cleanup, so I was thinking, can we do a little bit at a time?”

Though it is like a coastal cleanup in which people walk the beaches picking up litter, Ochoa’s ghost net–busting program is much more time-consuming, and even potentially dangerous. Ochoa recommends divers clean up nets in a group of at least six people. If divers hear of ghost nets, or come across any, they should tag the site with marker buoys. Once they return to the site, it’s a matter of descending, cutting out sections of the nets, and attaching them to lift bags (without getting snagged oneself). “It’s basically a supermarket bag with some straps. You attach it to the intended lift weight and then you inflate the bag underwater,” Ochoa says. “Ideally you’d have four divers in the water and two on the boat to receive the lift bags.”

Beyond lift bags, coastal ghost-net removal only requires equipment one could find in a dive shop and a hardware store. Actually doing it, on the other hand, is not simple. It requires diving skill, a great deal of precision, and an understanding of how the nets entangle the landscape. “If it’s on a rocky reef, no problem,” Ochoa says. “But if it’s on a coral reef, you have to be careful to not damage the coral.” And then there’s the issue of removing trapped animals that are still alive. “You have to be very careful with the animals,” he says. “Fish, seashells, and starfish are easy to remove. But anything bigger like a shark or manta or sea lion can be dangerous to the diver.”

Since Ochoa’s course debuted in 2018, approximately 25 divers in 20 different countries, including the United States, Dubai, Qatar, the United Kingdom, Indonesia, and Mexico, have completed it. But Ochoa’s course only reaches so deep—to 60 feet below the surface, with lift bags rated to lift no more than 50 pounds at a time. This only covers a tiny percentage of ghost nets, the ones that snag close to shore in places that see regular divers. As nets get larger, deeper, and farther offshore, the difficulty of removing them multiplies.

“A FAD, or a fish aggregating device, does exactly what it sounds like it does,” Lebreton says. In his work studying the garbage patch, Lebreton says, he found FADs to be the largest kind of ghost net. FADs often consist of floating buoys with attached synthetic nets, which can be up to a mile long, and hanging hundreds of feet into the water column. Some kinds of fish are attracted to any floating objects and the idea is that over time, FADs develop their own entire ecosystems, attracting species attractive to fishers. Some ghost net FADs are meant to drift, while others are moored and come loose. They can be large and may get Frankensteined together into an entangled behemoth that is impossible to disarticulate.

There are no regulations regarding how many FADs are put into the water each year, or how they should be collected, according to the Marine Debris Tracker, run by the National Oceanic and Atmospheric Administration Marine Debris Program and the Southeast Atlantic Marine Debris Initiative. It doesn’t help that they’re deployed most frequently in the jurisdiction-free chaos of the high seas. The only thing holding FAD-users accountable are GPS trackers that some carry, which fishers rely on to revisit their FADs. “The trackers are quite high-tech, and will let them know when there’s a school of fish around the net,” Lebreton says. “But sometimes these nets may just travel too far and it’s not worth it for the fishermen to come pick it up.”

In 2018, a 40-ton FAD washed ashore at Kamilo Point on the big island of Hawai’i. It was massive, much bigger than the middling two-tonners that had been washing up on Oahu. “Kamilo beach is so inaccessible that there was no way to bring a train or truck to remove the net,” Lebreton says. “I think the local government decided to burn it, releasing a whole bunch of melted plastic on the volcanic rock.”

FADs can only really be collected on boats with enormous cranes. Even more challenging is even finding them—their GPS trackers mean nothing if governments and nonprofits can’t access the data. At The Ocean Cleanup, Lebreton is working to develop artificial, U-shaped coastlines that could help concentrate floating waste, from water bottles, to small ghost nets, to titanic FADs, in one place using natural oceanic currents. “We’re trying to reproduce what a coastline does, but in a system that drifts,” he says. “And once the system has concentrated plastic, we can go with a vessel and pick up the whole lot.” Lebreton hopes the system, which is still being tested, will remove 50 percent of the mass of the garbage patch in the next five years.

As they work to clean up the ocean’s ghosts, Ochoa, Lebreton, and other advocates hope to see stronger conservation laws enacted and enforced. Lebreton wants more stringent regulations on the type and number of FADs that can be used, particularly on the high seas. And Ochoa wants laws incentivizing fishers to report their missing gear, a process that today often results in fines, and means that nets that might be able to be retrieved shortly after they are lost will continue to drift for years. “The image of ghost nets is spectacular, a huge net hanging in the ocean,” he says. “But I don’t want people to think that they are normal.”

A satisfying explanation is elusive.
science

The region's first and only locally-run hatchery provides a boost for both fishers and the imperiled royal sea snail.
sports

Tarpon, a powerful game fish, helped make the state a tourism hub more than a century ago.
poison

“If you can’t gather shellfish then you’re going to starve.”
Video • AO Docs

6:00
Want to see fewer ads? Become a Member.
From Around the Web
THE GASTRO OBSCURA BOOK
Taste the World!
An eye-opening journey through the history, culture, and places of the culinary world. Order Now