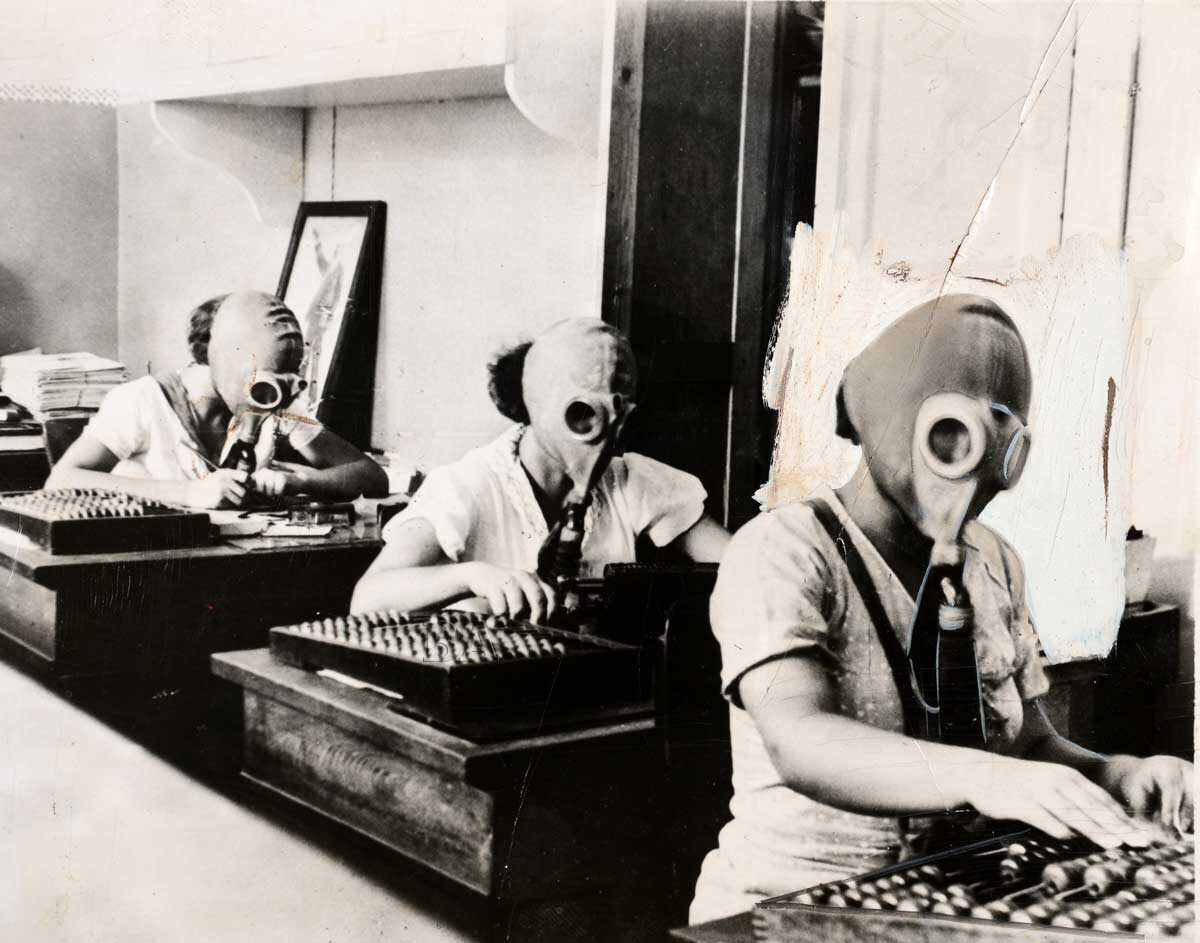 Bookkeepers prepare for a gas attack in Odessa, Russia, 1935. Stanley B. Burns, MD & The Burns Archive
In This Story
Destination Guide

In 1940, British Pathé issued a newsreel titled “Do You Carry Your Gas Mask?” In it, an unidentified employee from the Ministry of Home Security gently, in clipped tones, lectures an audience on the importance of carrying, and wearing, gas masks. “Some of us have been inclined to forget about our gas masks,” he chides, while jaunty music plays in the background. “You all have a gas mask, and you ought to carry it in order to practice wearing it.”

The vast majority of people watching this newsreel in Britain at the time would have had a gas mask. In 1938, before war had begun in Europe, the British government issued 35 million “General Civilian Respirators.” It had been 20 years since the end of World War I, when chlorine gas—and, later, mustard gas—had first been used. The estimates of total casualties from this form of chemical warfare are staggering: 88,000 dead and 1,200,000 injured. With war once again on the horizon, Britain and continental Europe began taking early precautions.

People were instructed not only to carry their gas masks, but also to practice wearing them. “Put it on for 10–15 minutes, one day a week,” says the British Pathé announcer. “It may be a little irksome at first, but you’ll soon get used to it.” The film then cuts to a room of typists. The clattering of keys stops, as each one unboxes her gas mask and, chin first, pulls it over her face.

The fear of potential gas attacks wasn’t limited to Britain. In Germany, France, and Italy, masks were available, if not as widely distributed. In the Soviet Union—which had suffered the majority of gas-related casualties in the previous war—no more than 10 percent of the population had one.

The extent to which gas masks were promoted as an essential part of everyday life is evident in an extraordinary collection of images from the Burns Archive. In one photo, a ballerina dons a gas mask in front of a mirror. In another, surgeons at Moscow’s Botkin Hospital operate in gas masks. A third shows London switchboard operators working in gas masks; the original caption states that the operators “are being trained to use special gas masks so they can remain at their posts in an emergency—even if their switch room is full of gas. The masks are fitted with microphones and earphones so that operators can hear and speak to callers.”

These photographs will join more than 250 others in the new book, Masked Fear: The Psychology of Gas Warfare 1918–1941, which is currently the subject of a Kickstarter campaign. According to Stanley B. Burns, the New York ophthalmologist who amassed the collection, governments created programs, movies, and photographs “to increase citizens’ comfort using their masks at home, at work, and at play. The photographs are haunting documents of ordinary people, including children, learning to live their lives wearing these odd contraptions.”

The Kickstarter campaign runs through November 28, 2017. Atlas Obscura has a selection of images from the collection.

In the 1920s and '30s, ticket-a-dance halls were full of "nickel-hoppers" and "fish."
gas maskschemicalsworld war iiphotographyvisual
Keep Exploring
animals

Strange and unexpected photos of wartime innovation, animal mascots, and Churchill in a onesie.
secret

How Alchemy Has Been Depicted in Art Through the Ages

Started in 1997, Šediváčkův Long is one of Europe's toughest winter events.
photography

Glowing Dutch Greenhouses, As Seen From Way Up High

Women Built London's Waterloo Bridge, But It Took These Photos to Prove It

Uncovering evidence of a long-forgotten history.
Read more
Thanks for sharing!